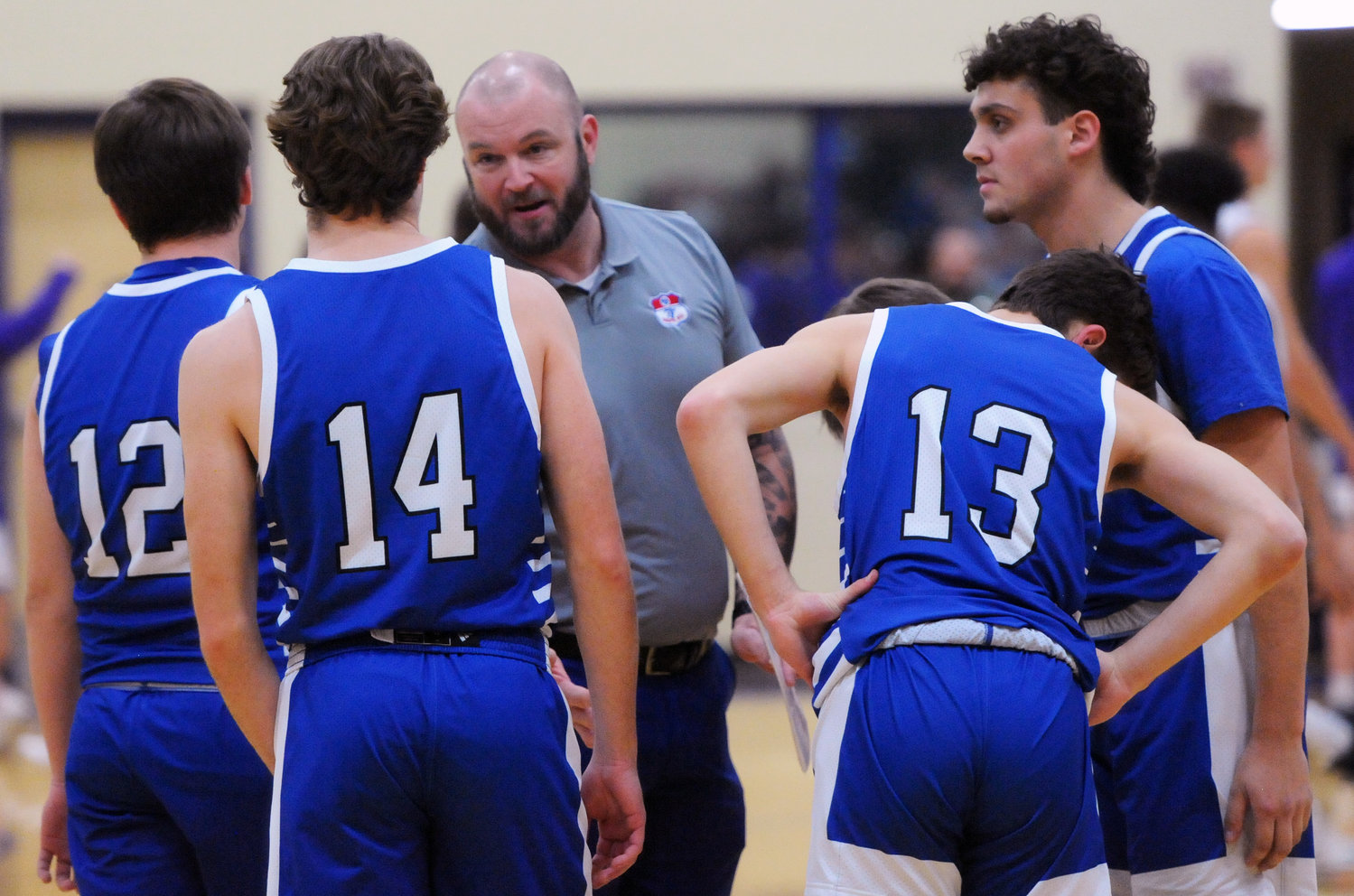 Forrest head coach Shane Chapman huddles up with his team before tip-off in the District 7-AA semifinals against Community.
Tribune Photo by Chris Siers
Posted Thursday, February 17, 2022 10:49 am
By Chris Siers ~ sports@t-g.com

UNIONVILLE — Forrest head coach Shane Chapman knew the Community Vikings would try to play through Stratton Lovvorn in Tuesday night’s District 7-AA semifinal matchup.
While the Viking senior got his, the Rockets couldn’t shut down the supporting cast around Lovvorn and fell, 50-47.
“Our guys played really, really hard. We knew what they were going to do. They were going to try to get the ball to Stratton, but they had other guys that stepped up and shot the ball well for them,” Chapman said.
Senior Hunter Bennett has come on strong for the Rockets (10-15) as of late but was limited in the early goings against the Vikings (14-14) on Tuesday night.
Despite being held scoreless in the opening frame, Bennett rallied to lead the Rockets in scoring and posted a game-high 16 points.
“They did a good job of closing off the high post and the mid-range stuff for us is where we try to make our bread and butter,” Chapman said.
“Brennan didn’t shoot the ball particularly great. This place has kind of got his number on defense and he didn’t get the ball going tonight.”
After trailing 12-5 following a Stratton Lovvorn 3-pointer with 2:18 left in the first quarter, Forrest rallied to close the game on a 9-2 run, including a Davin Porter 3-pointer at the buzzer to knot the game at 14 apiece after the first quarter.
Community opened the second quarter on a tear, rattling off eight-straight points to take a 22-14 lead with 4:22 left in the half.
But after the Viking outburst to start the second quarter, Bennett finally got the offensive wheels going and scored back-to-back baskets to spark a 12-4 run to close the half, highlighted by a Deason Jones 3-pointer with 27 seconds left.
Community closed the first half making just one field goal in the final 4:22.
While the Vikings opened the second half with a corner 3-pointer by Trace Broiles, Forrest answered with a pair of baskets by Andrew Timmons and Bennett to knot the game at 29 apiece.
Working the 1-3-1 zone defense, the Rockets went on to swap control of the scoreboard with Community five more times in the quarter until Broiles drilled a 3-pointer with 33 seconds left in the frame to give the Purple and Gold a 37-35 lead.
That back and forth affair continued into the fourth quarter and saw the Rockets eventually take a 41-37 lead on a basket by Jones with 6:35 left.
Community simply wouldn’t go away, however.
Back-to-back baskets by Porter put the Rockets on top with a slim, 45-44 lead with just under five minutes left, but Broiles answered with another timely 3-pointer to put Community on top, 47-45.
Bennett once again tied the game on a shot with 3:14 left, but a shot by Porter with 1:11 left caught every part of the iron and bounced in and out, landing in the Vikings’ possession.
It was then that Maki Fleming was fouled with five seconds left and sent to the line where he knocked down both attempts of a one-and-one effort with five seconds left.
Following the free throws by Fleming, Forrest attempted to in-bound the ball after a timeout but turned the ball over to Lovvorn, who knocked down the front end of a one-and-one attempt to put Community up 50-47.
The Rockets had one final heave at the rim on a long shot by Jones, but caught the back end of the iron and saw the shot miss long.
While Chapman’s game plan was to limit Lovvorn, it was the Vikings’ supporting cast around him that proved the most costly against the Rockets.
“We were just throwing some stuff out there. We don’t match up well against Stratton. He scored 1,000 points for a reason. We tried to scheme some things against him. I feel like we did a better job against him tonight from scoring as well. Their support staff stepped up and played well,” Chapman said.
While the loss eliminated the Rockets from the District 7-AA championship, Forrest’s season stays alive as the Rockets advance to the district tournament consolation round with the all-important matchup against the No. 2 seed from District 8-AA on the line.
Forrest will face Grundy County on Saturday night before taking part in the Region 4-AA tournament next week.
In two prior meetings during the regular season, the Rockets claimed back-to-back wins over the Yellow Jackets and hope to make it three-straight on Friday.
Tip-off is set for 6:30 p.m. on Saturday.