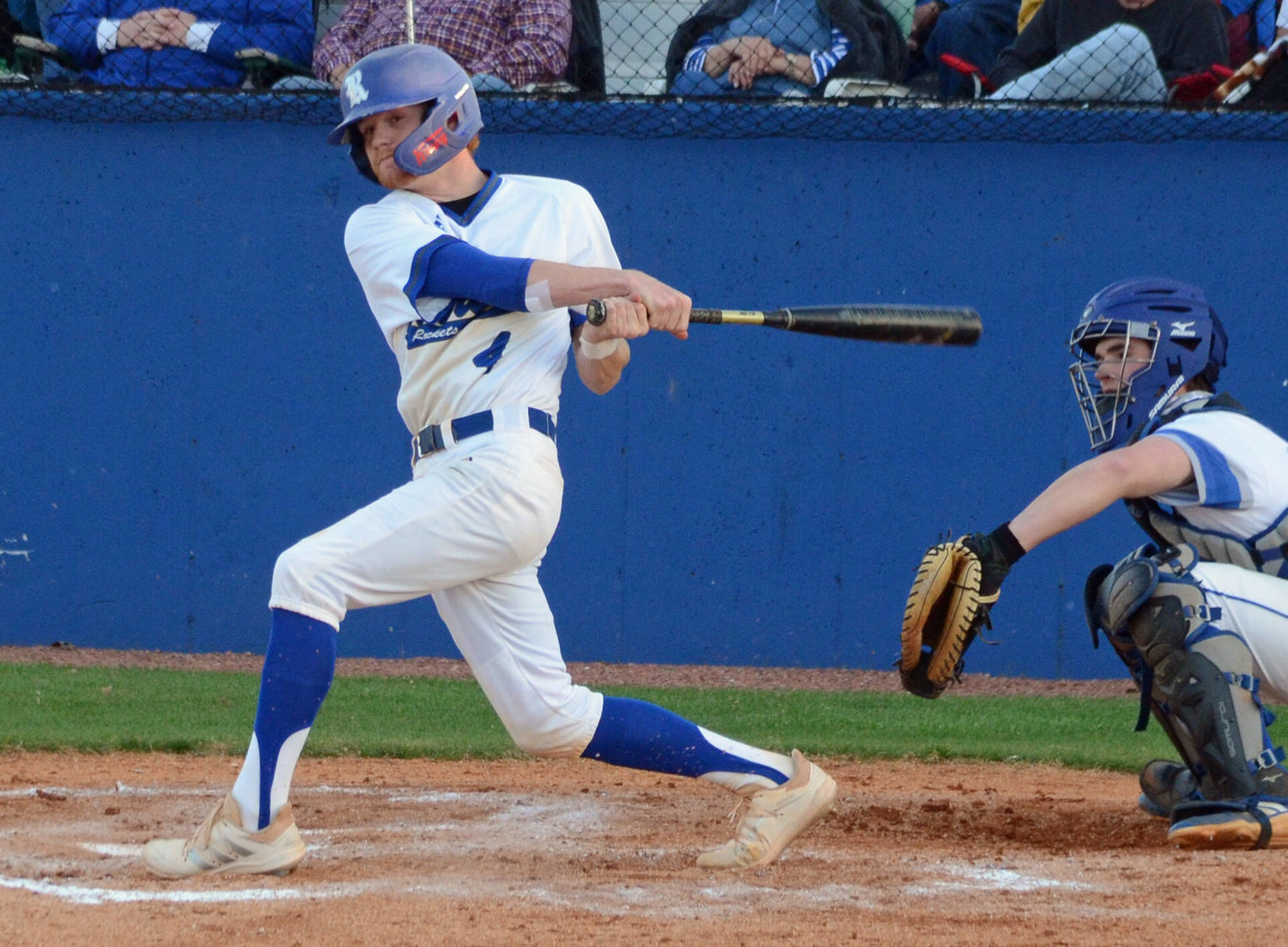 Forrest senior Cannon Cervantes had another huge game for the Rockets, going 2-for-2 at the plate with two runs scored and a pair of stolen bases while picking up the win in relief on the mound in a 9-5 win over Marshall County Monday night at Chapel Hill.
Tribune photos by Anthony S. Puca 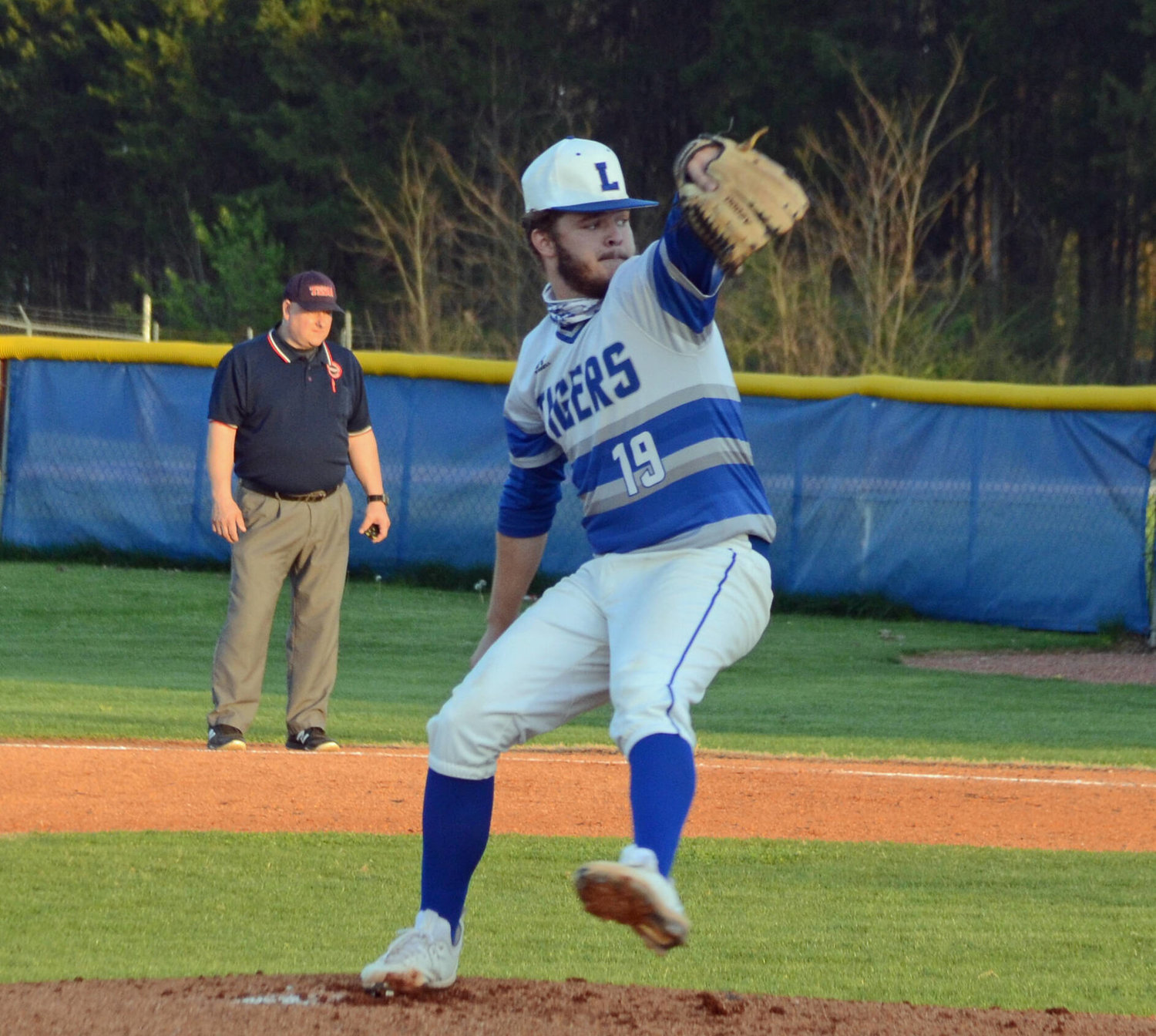 Carson Cheek gave it all he had on the mound and went 2-for-3 at the plate in Chapel Hill Monday night. 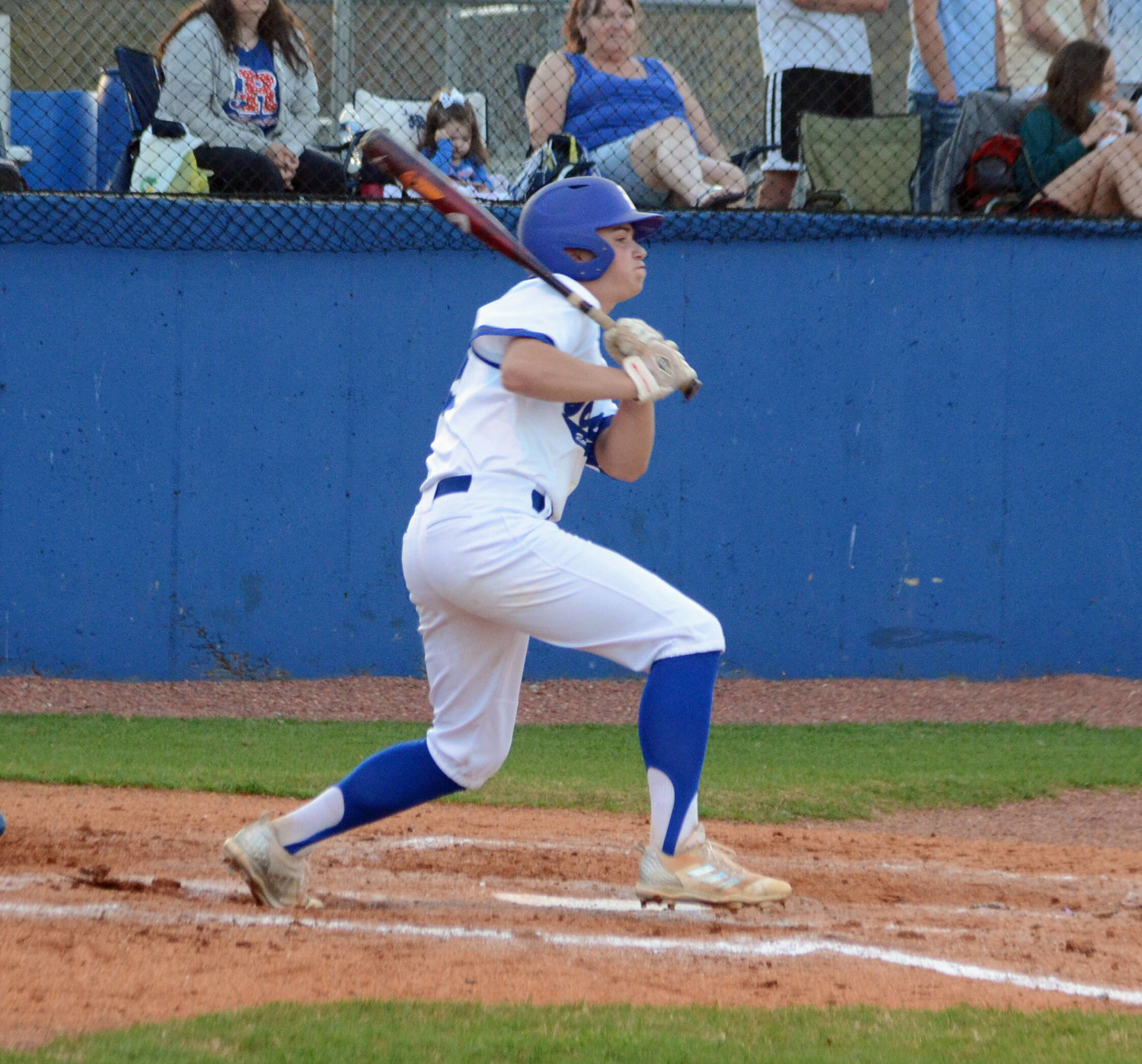 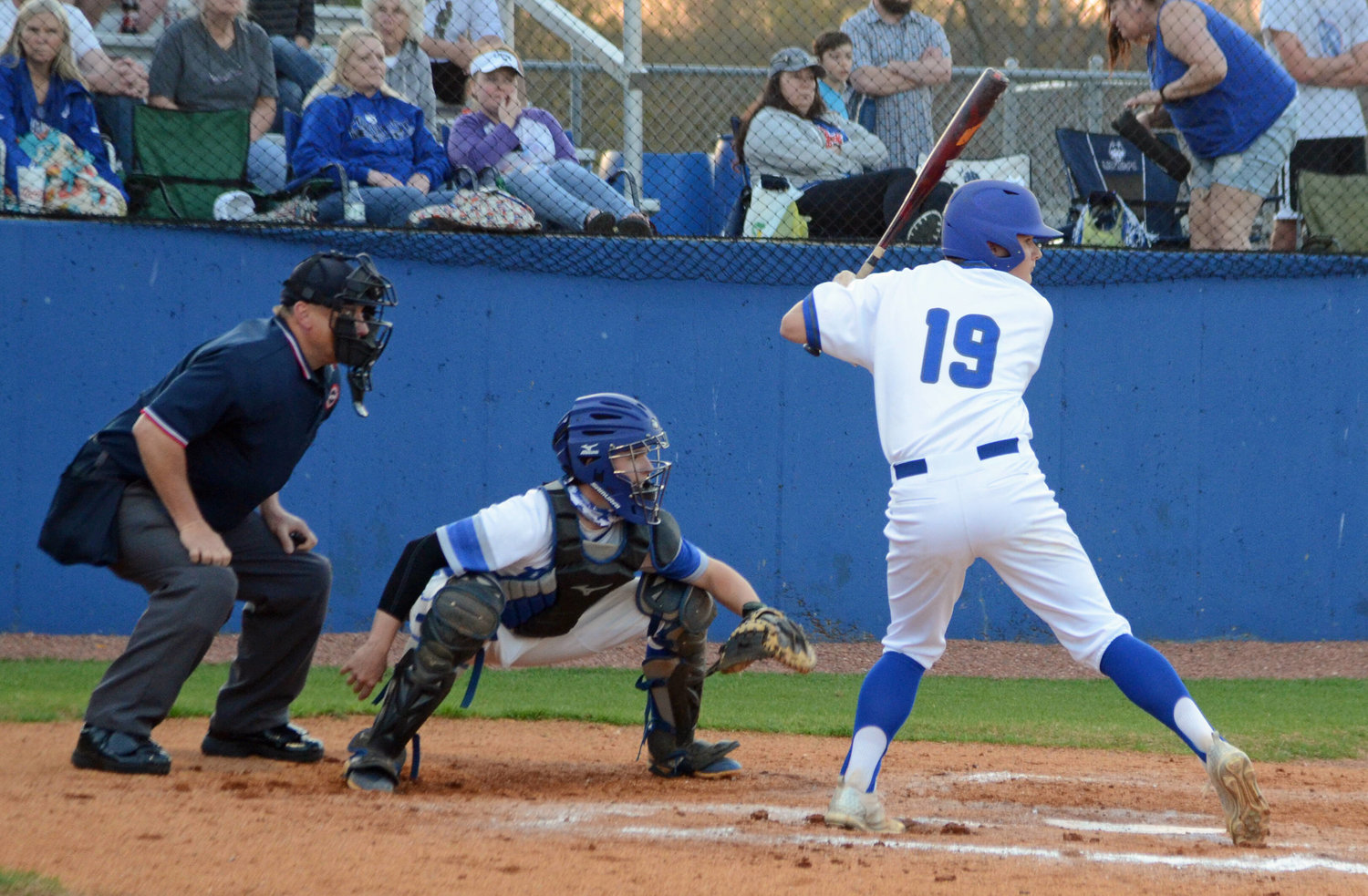 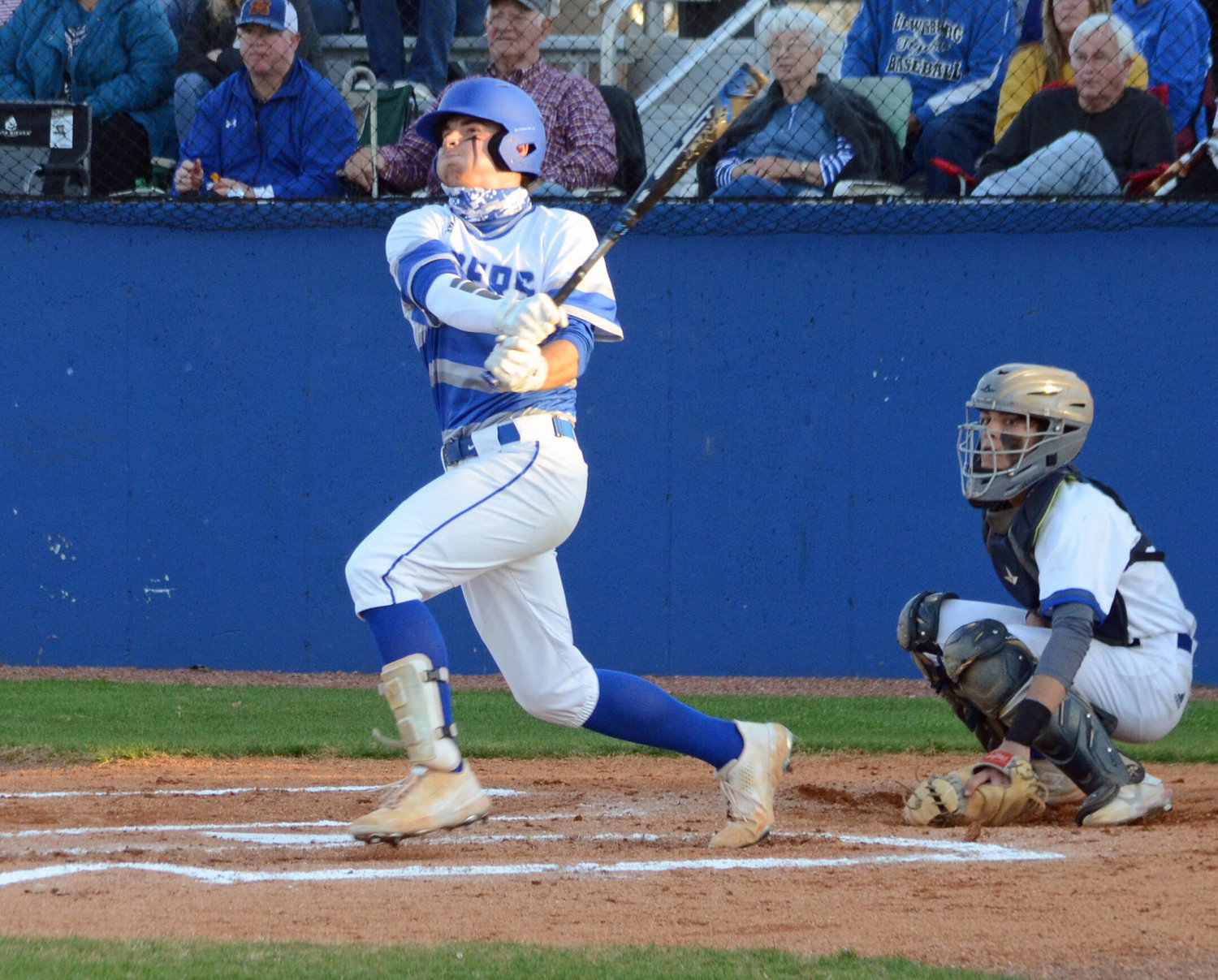 Tristan Griggs went 2-for-4 with three RBIs in the Tigers’ 9-5 loss at Chapel Hill Monday night. 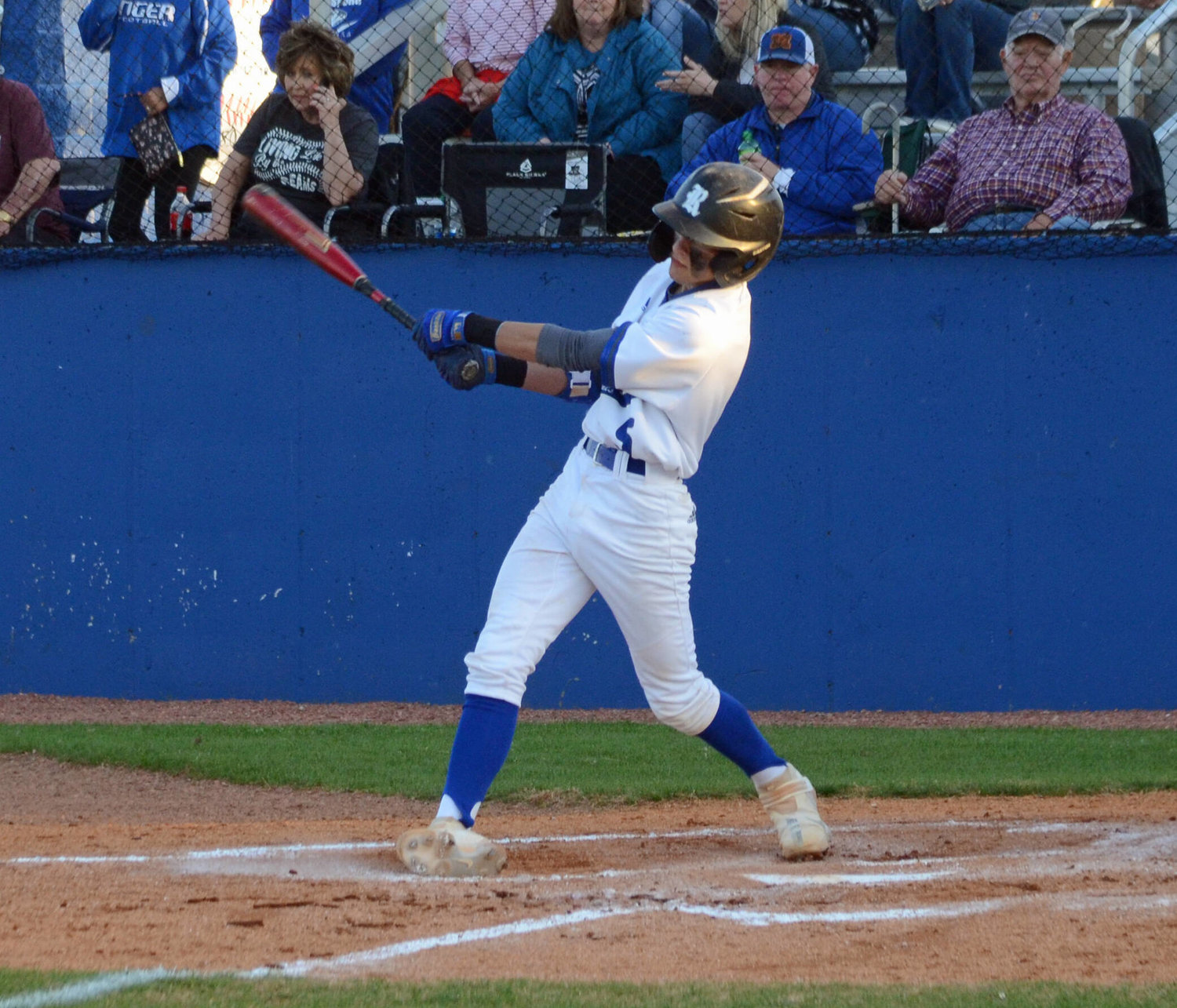 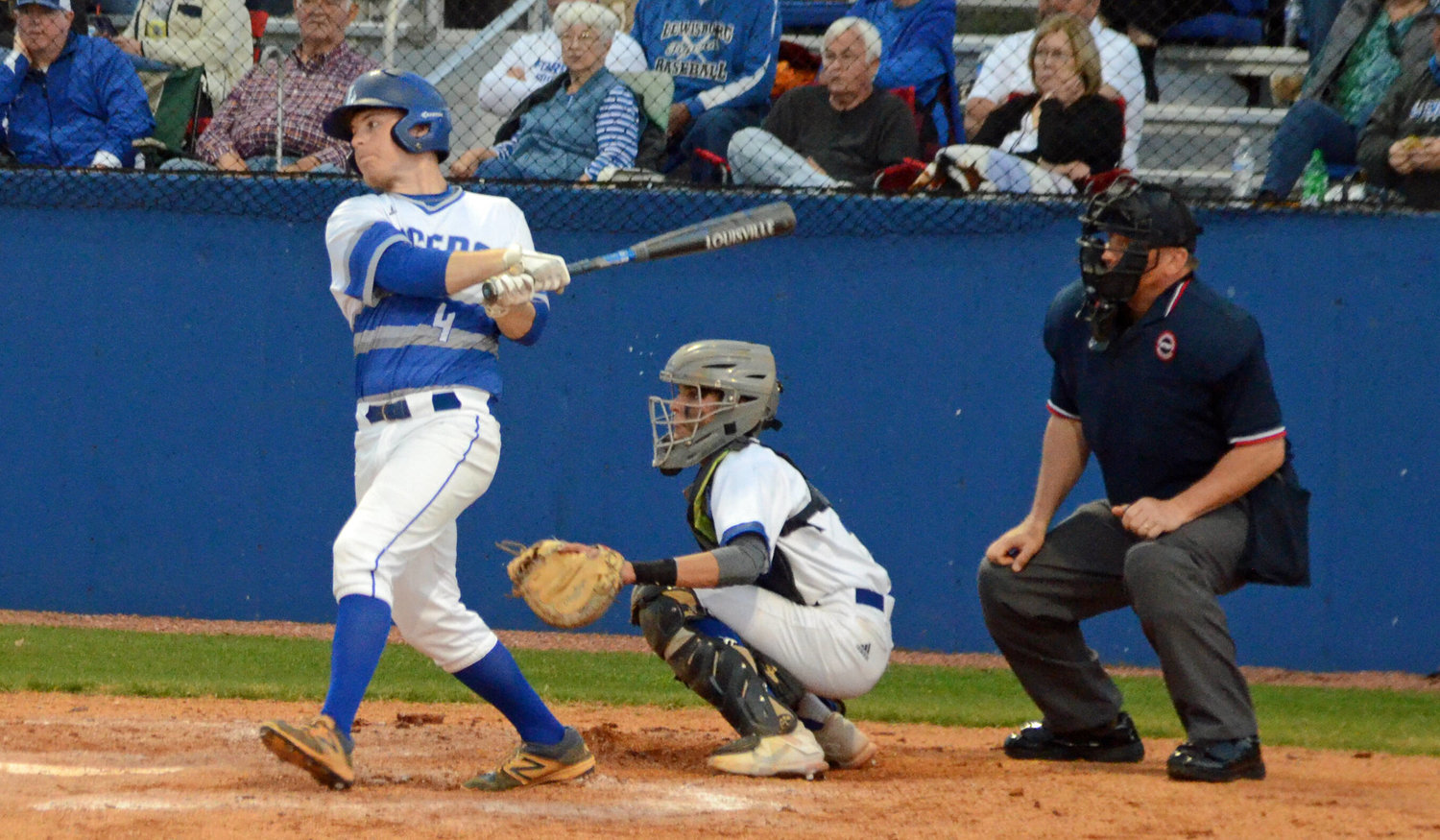 In the first of the home and away District 12-AA series, the Forrest Rockets (8-2, 2-1) held the home field versus intra-county rival Marshall County (3-4, 0-3) via a 9-5 comeback win over the Tigers at Chapel Hill Monday night.

Forrest had two big innings as they scored four runs in the third inning and five in the fifth to secure their fourth win in a row.

“Baseball is an emotional game, we were emotional, they were emotional and I couldn’t be more proud of these guys,” Forrest coach Andy Burkett said. “Cannon Cervantes battled through a foot injury the last three innings he pitched and we were absolutely not taking him out of the game and we knew he was going to get the job done.”

“When you get the momentum you have to take that momentum and be able run with it.”

The two squads finish up the regular season series tonight at Joe George Field in Lewisburg with first pitch scheduled for 6:30 p.m.

“They (MCHS) had a couple of tough losses against Nolensville and another hard fought loss tonight,” Burkett said. “I’m putting Max Kirby on the mound tomorrow and I’m expecting him to do Max Kirby things.”

“He’s a leader of this team and we consider him the captain of this team, he’s a kid that might as well be a third coach out here as far as I’m concerned, so there is nobody I trust more to put on the mound for tomorrow’s game.”

There were a lot of hits and a lot of errors in Monday night’s contest as the Tigers banged out 11 hits and had six miscues in the field while the Rockets had four errors and 10 hits in the game.

Cheek turned in a yeoman’s effort on the mound for the Tigers as he threw 97 pitches before departing with one out in the fifth inning.

Cannon Cervantes continues to shine for the Rockets as the senior went 2-for-2 and was on base all four times he was up as he singled twice, walked once, and was hit by a pitch.

Cervantes was also the winning pitcher, coming in for starting pitcher Kain Moses with two outs in the fourth inning and Cervantes went the rest of the way, giving up just one earned run to hold the line.

Moses gave up two earned on five hits, while striking out five and walking four MCHS batters in 3.2 innings of work on the mound.

Brennan Mealer, Braden Bowyer, and Andrew Timmons all had two hits apiece and Camden Vaughn and Max Kirby had one safety each with Vaughn driving in the eventual winning run in the bottom of the fifth inning.

The Tigers got on the board first as the Rockets dropped two fly balls in the top of the first inning and Griggs made them pay with an RBI sacrifice fly.

Cheek faced four batters in the bottom of the inning and struck out two.

Cheek drilled a long double to lead off the bottom of the inning, but the threat was quickly erased on a line drive double play to Max Kirby at third base.

The Rockets got their first three batters on base in the home half of the inning and tried to play some small ball.

Cheek and the Tigers’ defense was up to the task as Forrest tried back-to-back squeeze plays, but the threat turned in to a pair of putouts at home plate and Cheek retired the side on a ground ball to Ryan Kirby at second base.

The Tigers added to their lead in the top of the third inning as Griggs came up with a one-out, two-run single to left field to make it 3-0.

The Rockets came back in the home half of the inning as Cervantes singled to start the rally before Max Kirby and Moses were both hit by pitches to load the sacks with no outs.

Cheek came up with a strikeout before Mealer drilled a two-strike pitch up the middle, driving in two runs and a third run crossed the plate on a Marshall County throwing error.

Mealer took third on a wild pitch before scoring on a Bowyer base hit, putting Forrest in front for the first time in the game.

The Tigers rallied with two outs in the top of the fourth inning as Graves roped a single to right field and Ryan Kirby followed with another base hit to right and an overthrow to third base allowed Graves to trot home with the tying run.

Cervantes came on in relief of Moses and walked Thomas before getting an inning-ending out on a pop-up to Bowyer at first base.

Forrest left two runners stranded in the bottom of the inning and the Tigers regained the lead in the top of the fourth inning on an RBI base knock by Warner.

Mealer led off the home half of the stanza with a base on balls and went to second on a groundout and third on a passed ball before scoring on a wild throw to tie the game at 5-5.

Timmons followed with a base hit and Gillespie walked before Cheek left the game in favor of Logan McKnight.

Vaughn greeted McKnight with an RBI single up the middle and Cervantes followed with an RBI infield single to make it 7-5.

“The mentality the last few games we have had is pass the bat and give that guy behind you an opportunity and every single time we have had the mentality of passing the bat, good things have happened for us,” Burkett said. “I’ll take all the blame in world early in the game when I took the bat out of my guys’ hands with two squeezes, but I trust my guys and later on in the game I did and it absolutely paid off for us.”

Cervantes struck out two out of the four batters he faced in the top of the sixth inning and the Tigers turned a nice 6-4-3 double play to stop a Forrest rally in the bottom of the stanza.

Hammons led off the top of the seventh with a base on balls before Cervantes retired the next three Tigers in order to end the game.