It took a 28-25 Week 17 win, but in the end the Tennessee Titans were able to lock up the overall No. 1 seed in the AFC, which guarantees home field advantage throughout the playoffs. 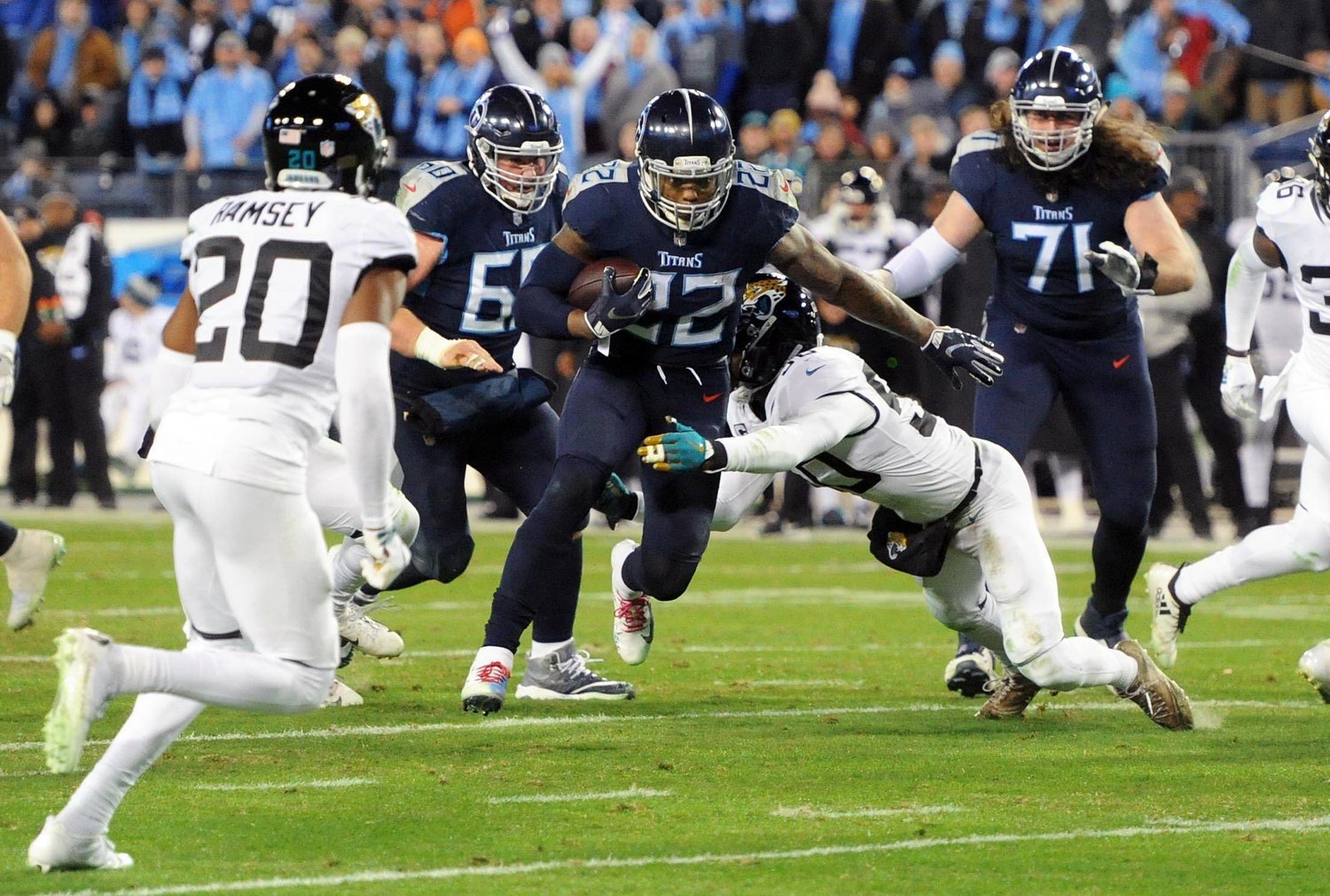 After playing in just eight games and not since October, Derrick Henry will be back in the rotation for the Titans in the divisional round of the AFC playoffs.
Tribune File Photo by Chris Siers
Posted Thursday, January 13, 2022 11:29 am
By Chris Siers ~ sports@t-g.com
It took a 28-25 Week 17 win, but in the end the Tennessee Titans were able to lock up the overall No. 1 seed in the AFC, which guarantees home field advantage throughout the playoffs.
Credit the Titans’ front office, led by general manager Jon Robinson, and head coach Mike Vrabel—with the amount of injuries this club had this season, there’s no way the Titans should have been in contention for the No. 1 AFC seed, or even winning the AFC South.
It was just the sixth time in franchise history the Titans won 12 games and Vrabel was able to navigate a season in which the Titans hit a league record number of players due to injuries.
Whether it was the offensive line and Taylor Lewan, or rising star linebacker David Long Jr., or the NFL’s reigning rushing champion Derrick Henry, the 2021-2022 season will be remembered as a masterful patchwork of a roster.
The Titans dressed a total of 91 different players this season, and yet still managed to be crowned the No. 1 AFC seed.
Getting the win on Sunday proved vastly important as the Titans not only clinched home field advantage throughout the playoffs, but they also get a key bye week—which gives Henry another week to get back into the system.
Henry was activated from the injury list this past week after he suffered a Jones fracture, which required surgery to repair.
Even having only played in eight games this season, Henry posted totals better than the majority of running backs in the league.
He finished ninth in total yards with 937 and tied for sixth with Ezekiel Elliott with 10 rushing touchdowns—and he hasn’t played since October.
With Henry getting healthy, and the bye week to rest the starters, the Titans sit poised with perhaps the best odds to make it to Sofi Stadium in Inglewood, California for Super Bowl LVI.
It wasn’t just Henry that the Titans relied on this season.
In his absence, D’Onta Foreman became the reliable guy out of the backfield and finished the 2021-2022 regular season with 566 yard and three rushing touchdowns.
The front office also took the chance on getting Julio Jones, but like much of the Titans’ roster, Jones struggled with consistency this season and only logged 434 receiving yards and one touchdown in 10 games.
The same could be said for A.J. Brown, who finished the year with 869 receiving yard and just five touchdowns.
But one guy who stayed healthy and proved his value to the team was Ryan Tannehill.
While he struggled with turnovers at times, he completed over 67 percent of his passes and threw over 3,700 yards, but had 14 interceptions against 21 touchdowns.
The Titans will face the winner of Kansas City and Pittsburgh in the divisional round in two weeks.
For now, the road to Super Bowl LVI goes through Music City.