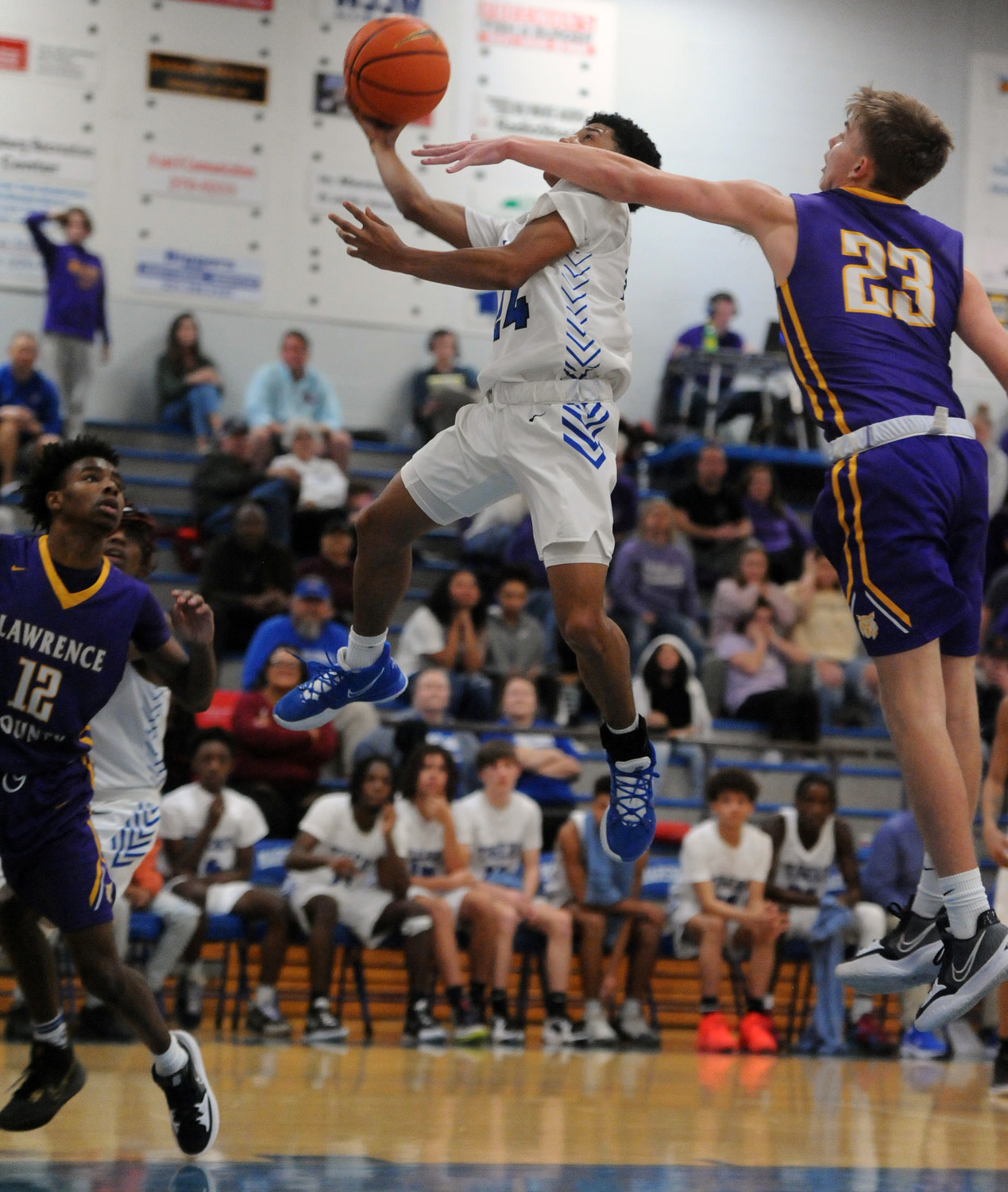 Jamahl Gentry catches some major hang time, battles through the contact, and finishes a layup with 38 seconds left against Lawrence County on Tuesday night.
Tribune Photo by Chris Siers 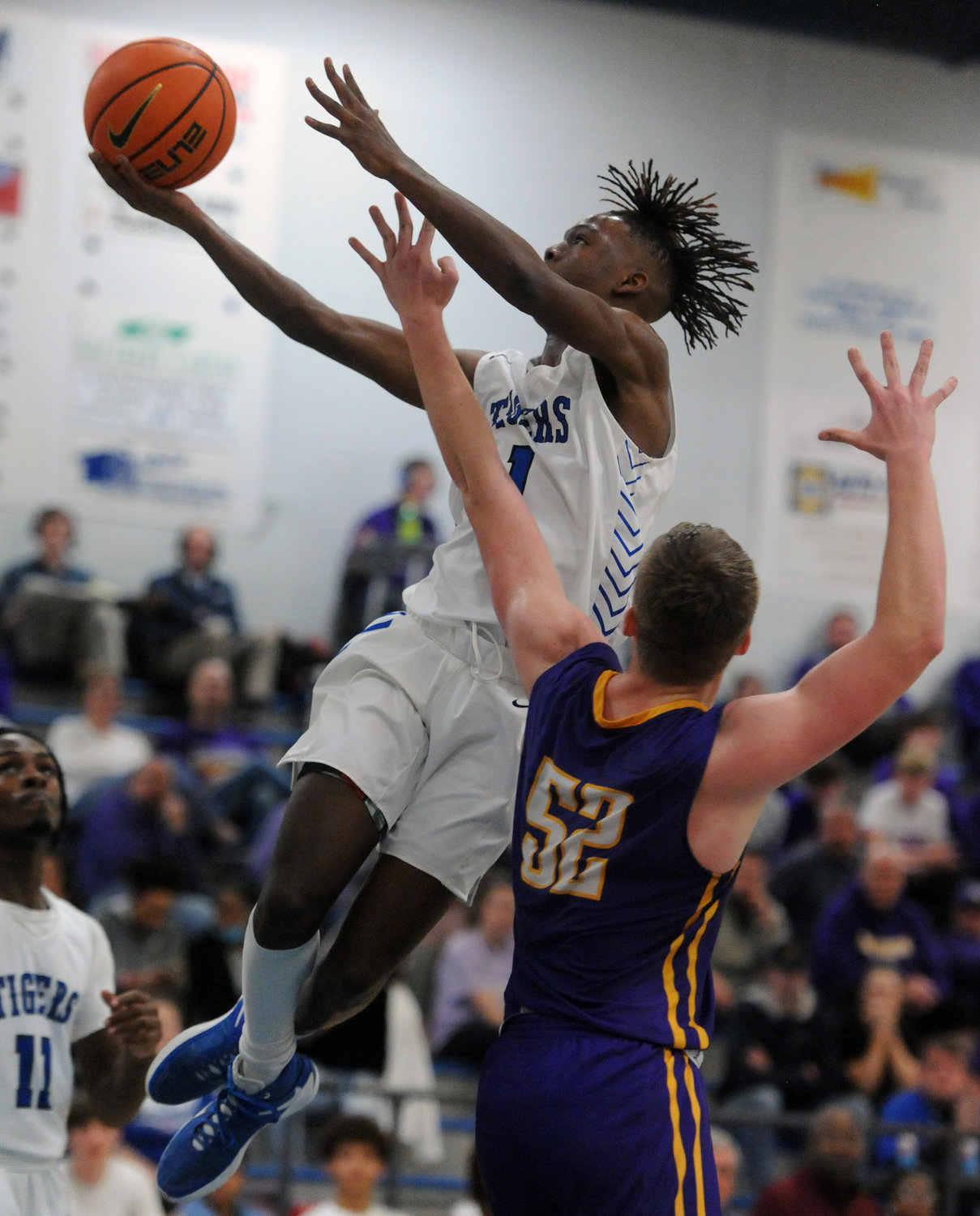 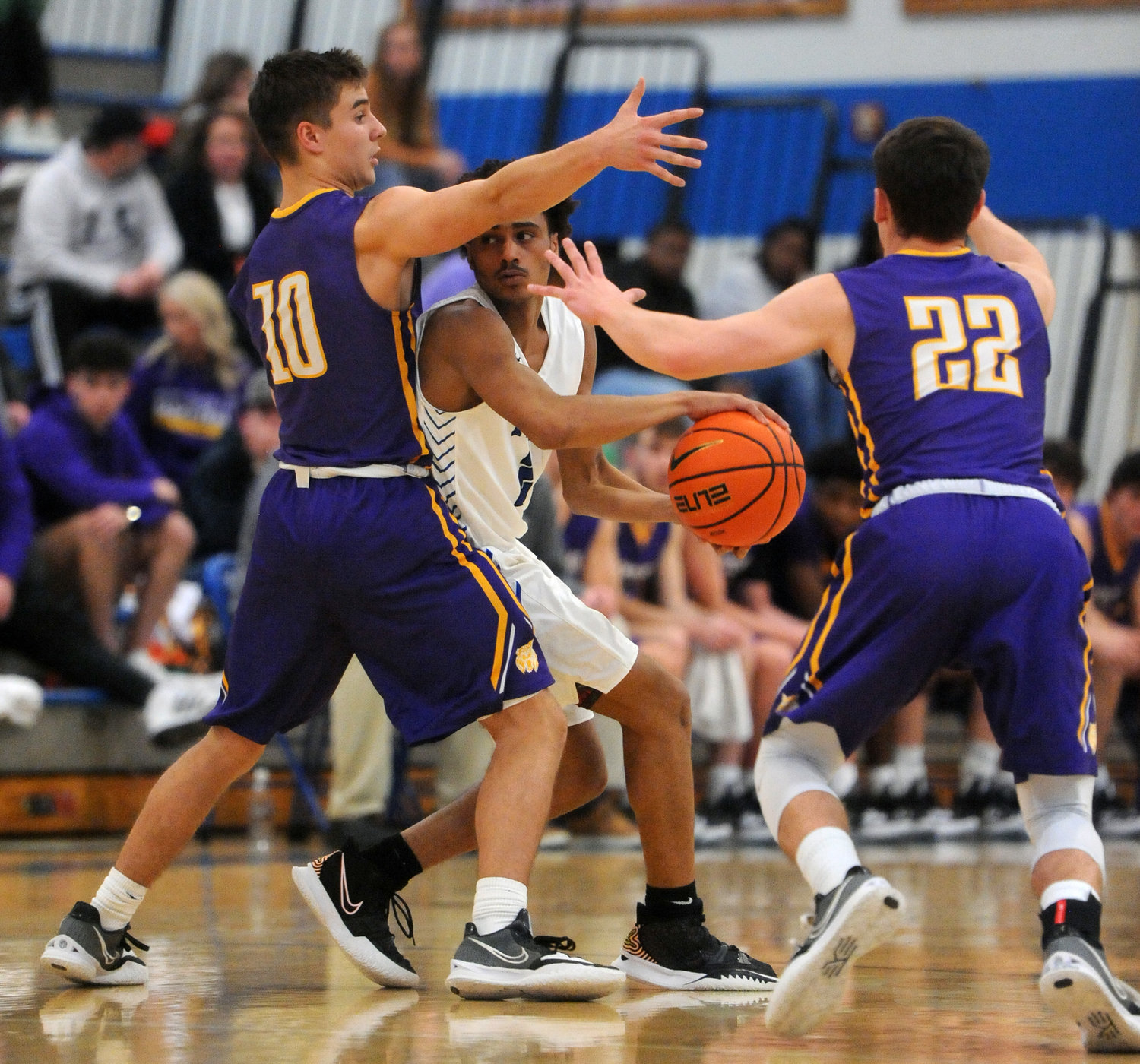 Kintarius Morris works through the trap and passes the ball during the fourth quarter. He finished with a game-high 13 points.
Tribune Photo by Chris Siers
Previous Next
Posted Thursday, February 10, 2022 11:14 am
By Chris Siers ~ sports@t-g.com

LEWISBURG — The Marshall County Tigers led by as many as 10 points in the fourth quarter, but saw a furious Lawrence County (13-12, 4-5) rally in the fourth quarter tie the game at 41 apiece with 1:21 left.
The Tigers responded by closing out the game with a perfect effort at the free throw line with a minute to go for the 49-41 win over the Wildcats.
After battling to an 11-11 tie after the first quarter, Marshall County seemingly took firm control of Tuesday night’s District 8-AAA clash.
With 6:15 left in the first half, it was senior Devonte Davis that came up with a steal and layup to kickstart a 14-1 run that allowed the Tigers to carry a seven-point lead into the half.
Lawrence County (17-9, 4-5) managed a single field goal, which came on a Tiger turnover, with 1:15 left in the half.
Marshall County got a big boost from Kintarius Morris in the third frame when he hit a pair of 3-pointers to open the Tigers’ scoring in the second half.
Defensively, Marshall County did not allow the Wildcats to connect on a shot from the floor.
All six of Lawrence County’s points came via free throws in the quarter.
The Tigers kept ahold of a 10-point lead for the majority of the third quarter.
After the Wildcats cut the Tigers’ advantage to single digits early in the third frame, a basket by Jones once again bumped the Marshall County lead to 11 points with 4:44 left in the game.
But after his score, Lawrence County was able to rattle off eight-straight points to cut the Marshall County lead to three points with just over two to play.
With 1:54 left, Jamahl Gentry was fouled and sent to the line for a one-and-one attempt, where he ended the Wildcat run by knocking down both attempts to stretch the lead back to five points.
A 3-pointer by Lawrence County’s Logan Boswell and a basket off the block by Luke Boswell knotted the game at 41-apiece, with 1:21 to go.
Needing to stop the clock, Lawrence County was forced to foul and with 1:11, Gentry was sent to the line after picking up the single bonus foul, Gentry promptly knocked down both free throw attempts to once again give the Tigers the two-point lead.
He followed with a layup at the 38-second mark before Davis and Morris added two more free throws apiece in the final 23 seconds.
As a team, the Tigers were a perfect 6-of-6 at the line within the final minute.
For the game, Marshall County finished 9-of-12 at the charity stripe, while Lawrence County managed just 6-of-16 attempts.
Morris had the hot hand for the Tigers on Senior Night and led the home team with 13 points, including nine from the perimeter, while Davis chipped in 11.
Lawrence County didn’t manage to place a single player in double figures.
Alex Bedford and Alex Carr led Lawrence County with eight apiece.
The Tigers will wrap up the regular season on Thursday evening at Page in the District 8-AAA finale.