For the second straight year the Marshall County/Nolensville regular season ending matchup had a direct consequent on the Region 4-4A playoff seeding.

The winner would enjoy a first round home playoff game with the loser traveling to the Cumberland Plateau for a date with the Region 3-4A number-two seed.

The Tigers went into the half down 14-7, but raced back for a 28-21 lead with 10:37 left in the contest before the Knights scored two unanswered touchdowns to end the game and wrap up second place in the region. 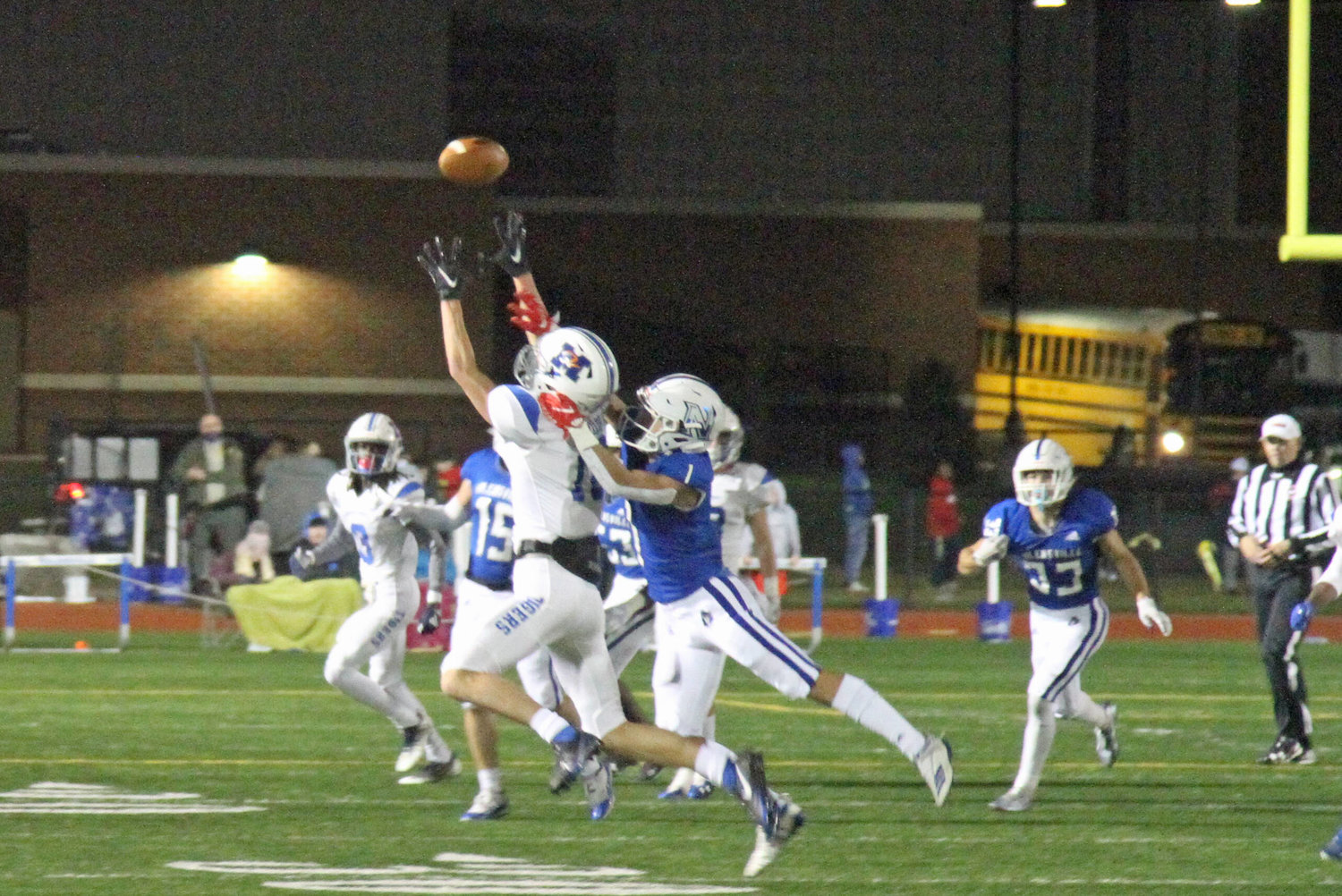 Christian Stacey goes up high for a Bryson Hammons pass in the Tigers’ 35-28 loss at Nolensville Friday night.
Tribune photos by Mari Morales 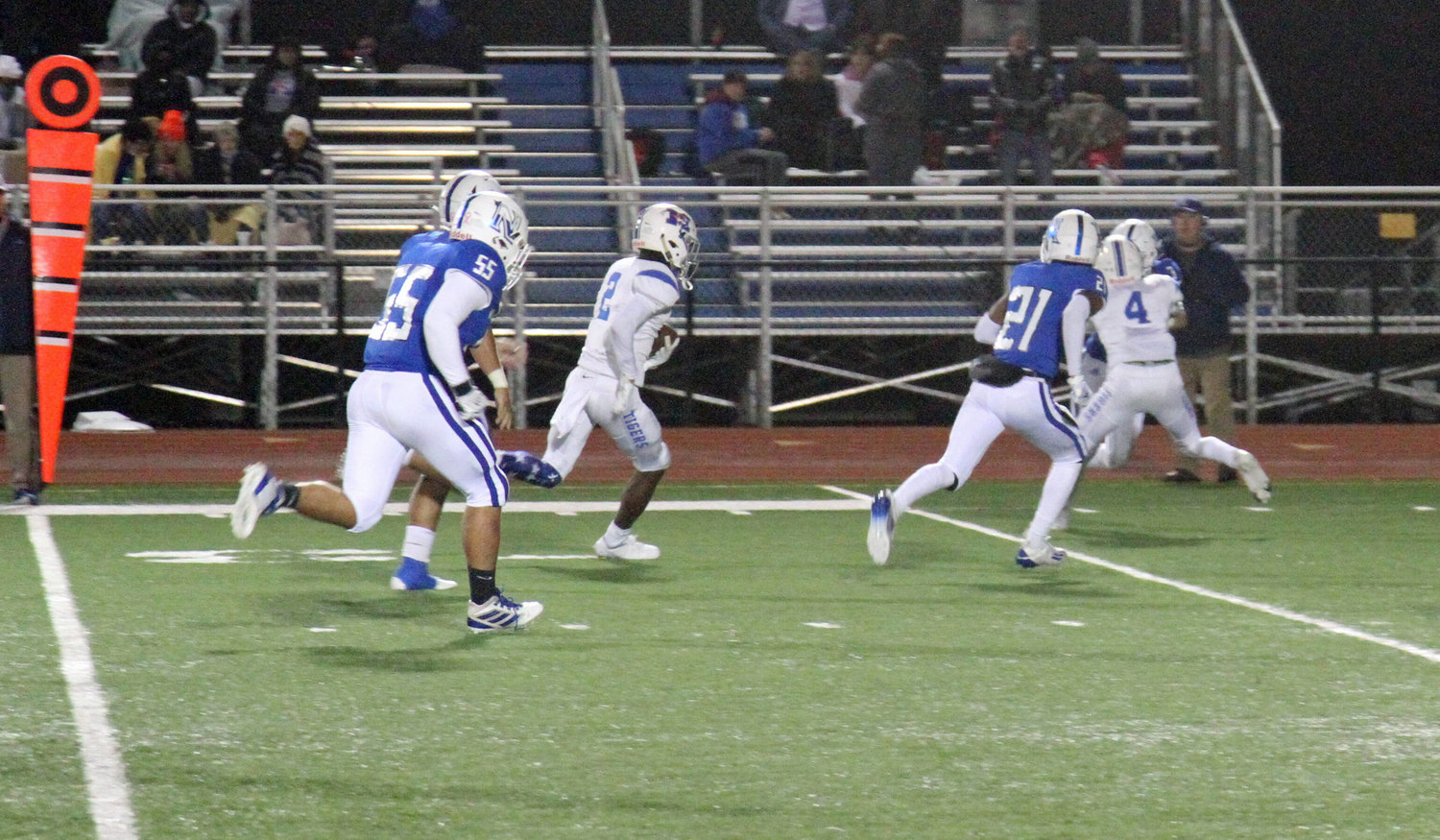 Tiger junior running back Lamarion Pierce (2) breaks off a 31-yard second half run versus Nolensville. 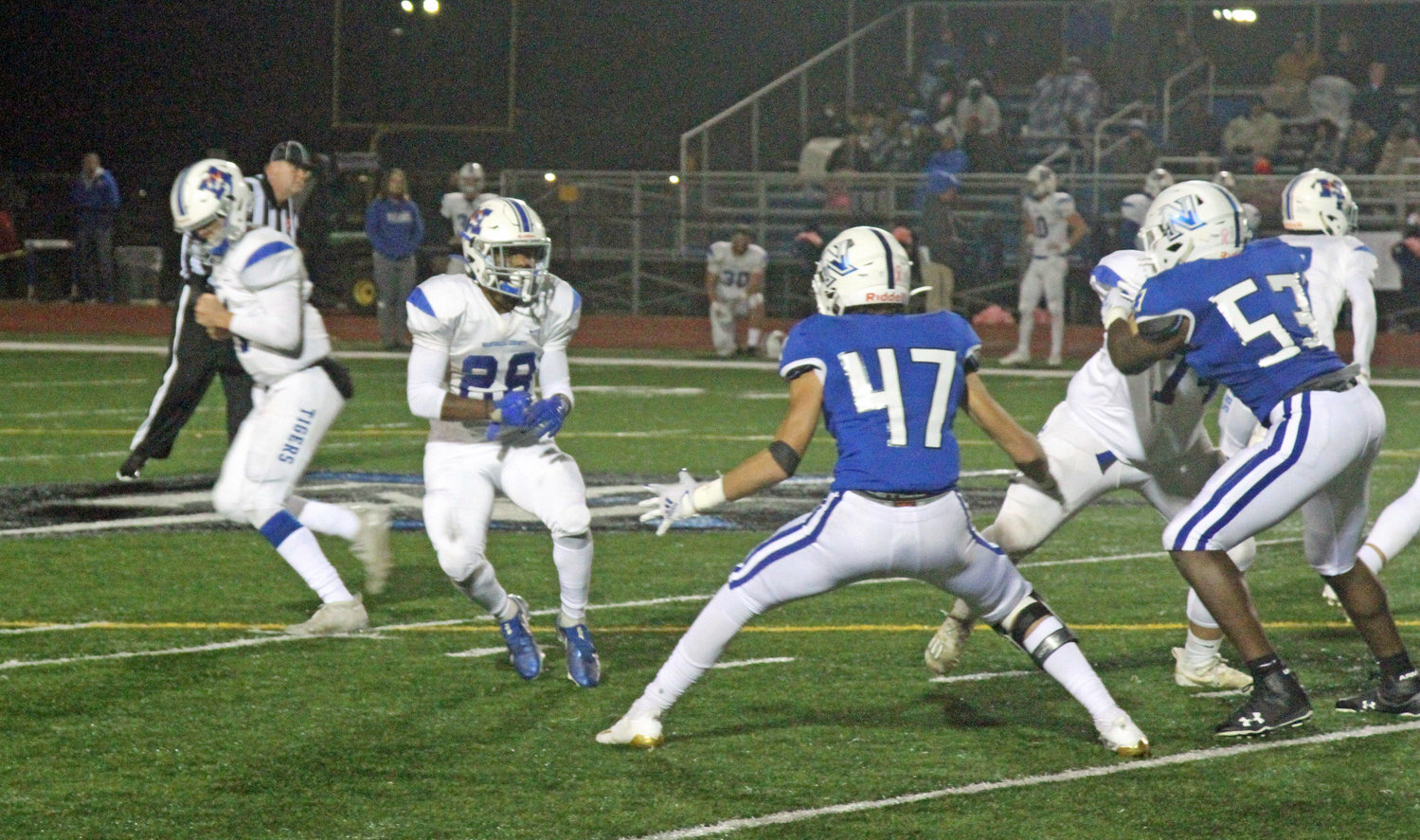 Tiger quarterback Bryson Hammons and running back Demari Braden fool the Knights’ defense with play action while Lamarion Pierce breaks off a 31-yard run opposite field. 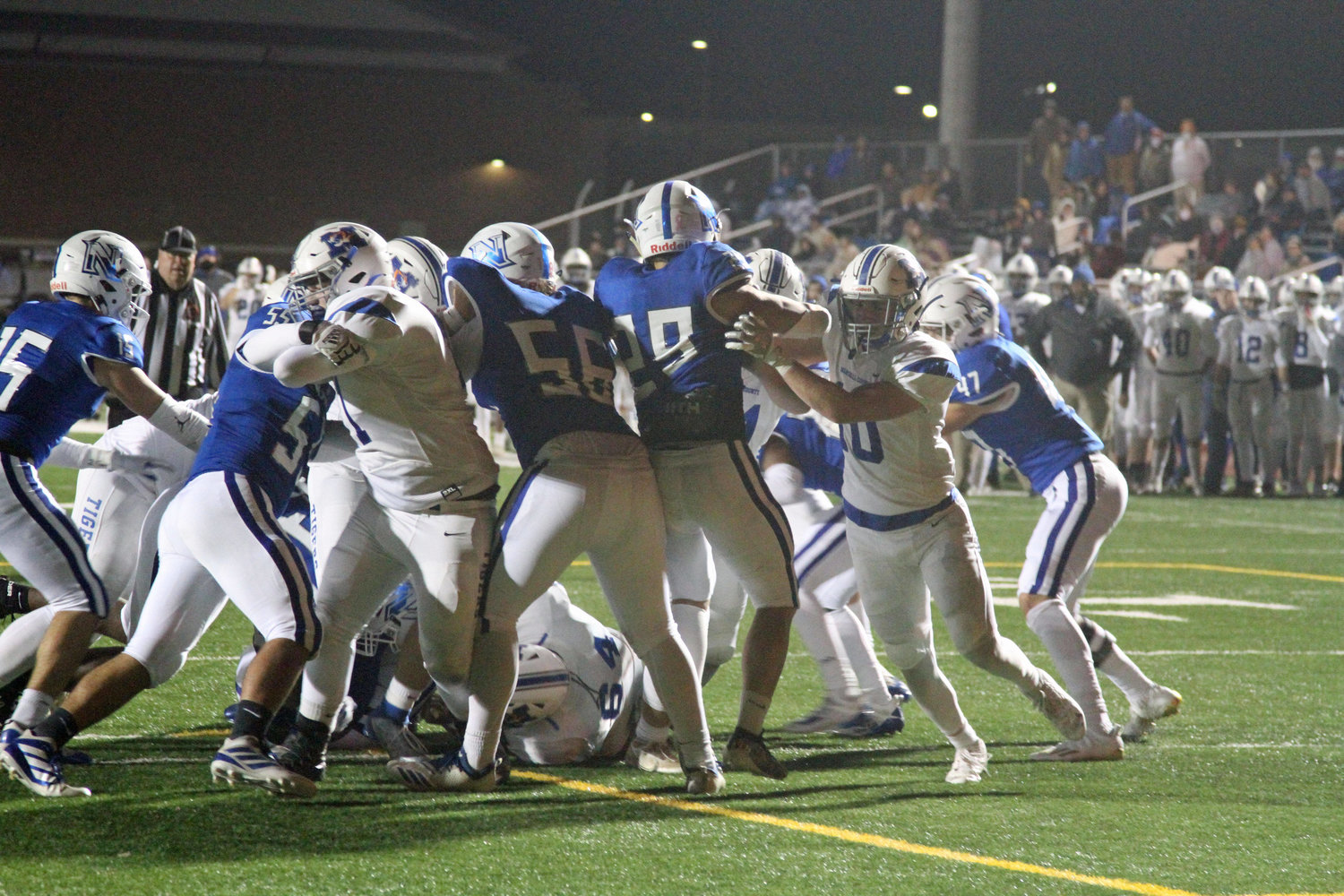 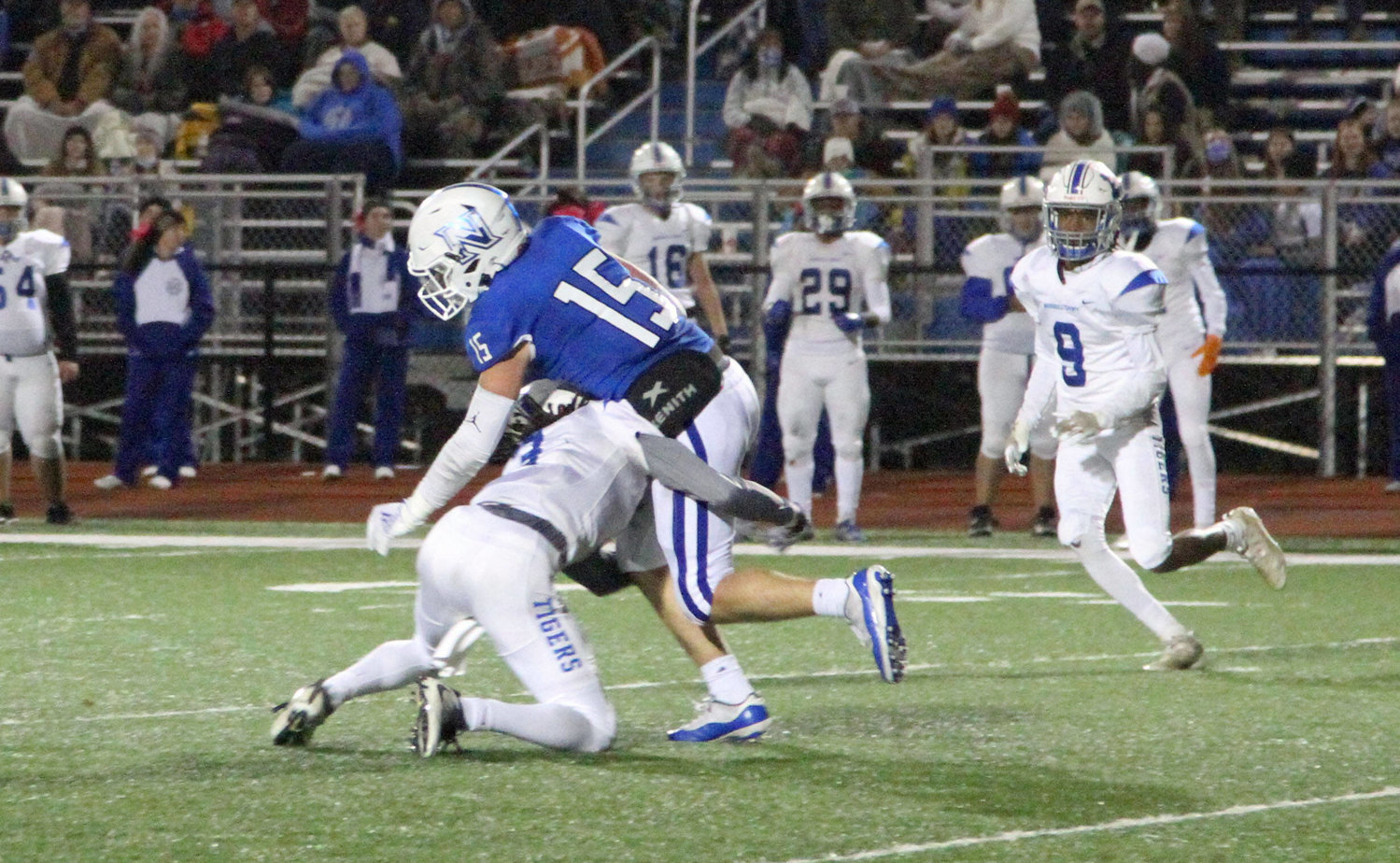 For the second straight year the Marshall County/Nolensville regular season ending matchup had a direct consequent on the Region 4-4A playoff seeding.

The winner would enjoy a first round home playoff game with the loser traveling to the Cumberland Plateau for a date with the Region 3-4A number-two seed.

The Tigers went into the half down 14-7, but raced back for a 28-21 lead with 10:37 left in the contest before the Knights scored two unanswered touchdowns to end the game and wrap up second place in the region.

"We came in knowing we had to contain and stop their skill players," senior linebacker Christian Stacey, who finished with nine tackles, said. "We did well for some stretches during the game, but we thought we hurt ourselves too much throughout the game."

The Tigers were led by quarterback Bryson Hammons, who finished with 82 yards in the air on 12-of-23 passing, but also threw a career high three interceptions including a pick by Colton Dobson with 11 secs to play on the Tigers’ potential game-tying drive.

Hammons had just three total interceptions on the season entering the contest.

The Tigers had big nights from all-everything back Lamarion Pierce, who finished with 244 all-purpose yards and Demari Braden, who tallied 66 yards and two touchdowns on 18 carries.

Christian Stacey added his third touchdown of the season on a five-yard grab.

"We had been running the ball a lot that drive and then called the play action pass," Stacey recalled about his score. "I had to make sure and sell the block and slip out into the end zone and just catch it at that point."

For the first time since the week three Shelbyville contest, the Tiger defense gave up more than 30 points.

Marshall County is 1-2 when allowing 30 plus points by an opponent.

"Nothing was different (about this defensive performance)," Devonte Davis, who leads the Tigers with three interceptions on the year, said. "They ran some things that they hadn't ran all year that we weren't ready for, but for the most part the defense kept its energy and we fought all night."

"A few bad calls here and there," Davis added. "But we could have executed better on both sides of the ball."

Connor Hilton led the defense with 10 tackles with 1.5 for a loss while both Davis and Stacey chipped in nine tackles each.

Hayden Sheppard added seven tackles with a pass defended, a caused fumble, and a fumble recovery and Logan McKnight finished with five tackles, a sack, and 1.5 tackles for a loss.

The story of the game was the Tigers inability to stop the Knights big playmakers down the stretch.

Senior quarterback and Long Island University commit Ryder Galardi torched the Tiger secondary for 282 yards and a score on 15-of-23 completions, running back Samson Johnson had a career night with three rushing touchdowns and a fourth receiving score and wide receiver Ben Coggin finished with a game-high five receptions for 142 yards.

Colton Dobson led the defense with two picks while Gage Skipper added another crucial pick for the Knights.

The Tigers looked in control with a Braden one-yard plunge to tie the game at 21-21 late in the third before a Nolensville three-and-out gave the ball back to the Tigers.

The Tigers had the Knights on their heels on the next possession, but on third-and-long, Galardi hit Coggin for a 69-yard gain to setup an 11-yard touchdown run by Galardi.

A Tigers’ three-and-out gave the ball back to the Knights and Galardi hit both Coggin and Rose to setup a five-yard Johnson score for the 35-28 final.

The Tigers travel to Lafayette for a matchup against Region 3-4A #2 seed Macon County (7-2), who started the season 5-0 before losing two of its next three games including a 24-20 loss to eventual region champion DeKalb County (6-4).

Macon and Marshall County have never played each other in the postseason.

"We know that they are a Wing-T team who likes to play very physical and control the ball," Stacey said. "If we can bring the physicality to them and clean up some of our mistakes we believe we can advance to the second round.

Macon County is on a five-year playoff streak (2016-2020) with all-time playoff record of 4-15 that includes three straight opening round losses to Region 4-4A teams with its last playoff win coming in 2016 with 56-39 win over Clarksville Northwest.

All three other playoff wins came in 2003 when Macon County advanced to the semifinals before losing 26-0 at Knoxville Fulton.

Marshall County has a bit more playoff history with a 30-34 all-time playoff record with 36 appearances.

Marshall County coach Thomas Osteen holds a 64-23 overall record with the Tigers over six years with an 11-6 playoff record including three straight semifinal berths from 2016-2018.

Osteen also sports a 5-1 record versus Region 3-4A and 5-1 record in first round games.

"We need to start fast and continue fast," Davis offered. "We've done a good job of that all year."