For the second time in three years, Marshall County (9-3) make the trek to Coffee County to face Tullahoma (12-0) in the second round of the Class 4A state playoffs. Unlike the 2018 matchup where the underdog fourth-seeded Tigers took the game into the final minutes of a 16-14 loss, Friday's matchup was all Wildcats all the time in a lopsided 35-7 win for the number one ranked team in class 4A... 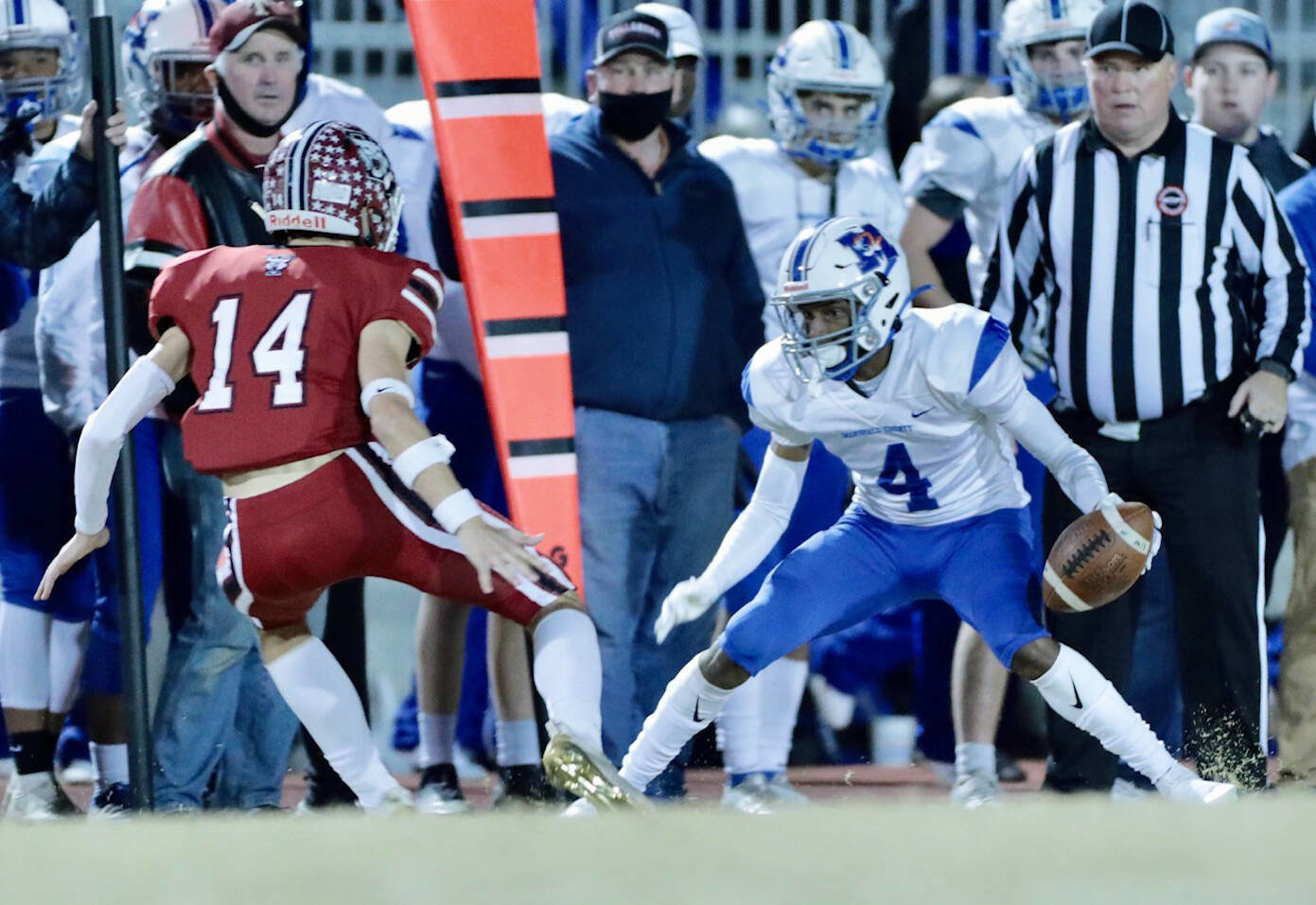 Senior wide out A’Ky Howard (4) puts a move on Tullahoma defender Adam Owens in the Tigers’ season ending loss at Tullahoma Friday night in a Class 4A second round playoff game.
Photos by Matt Mizner 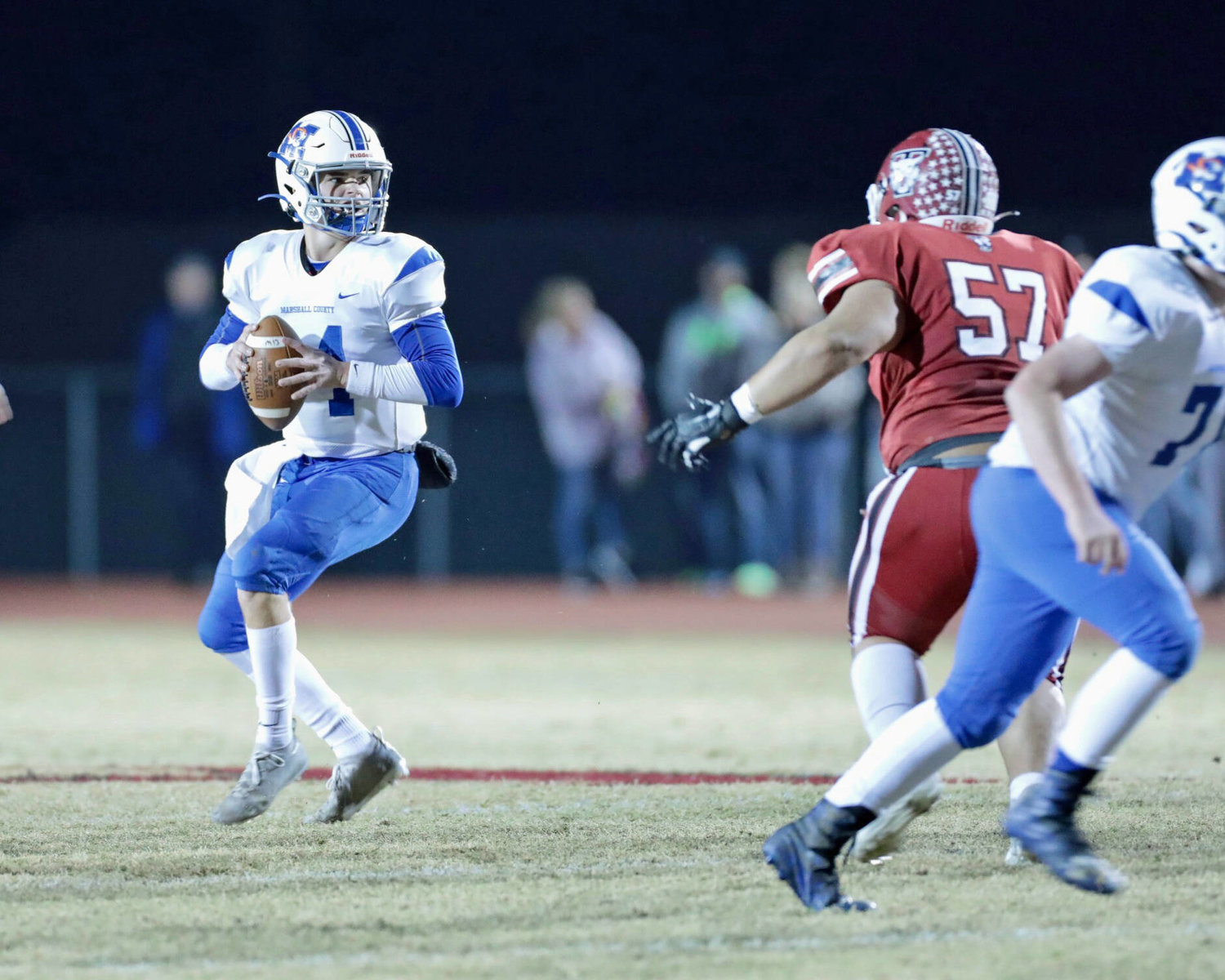 MCHS quarterback Bryson Hammons (14) drops back for a pass versus the Wildcats. 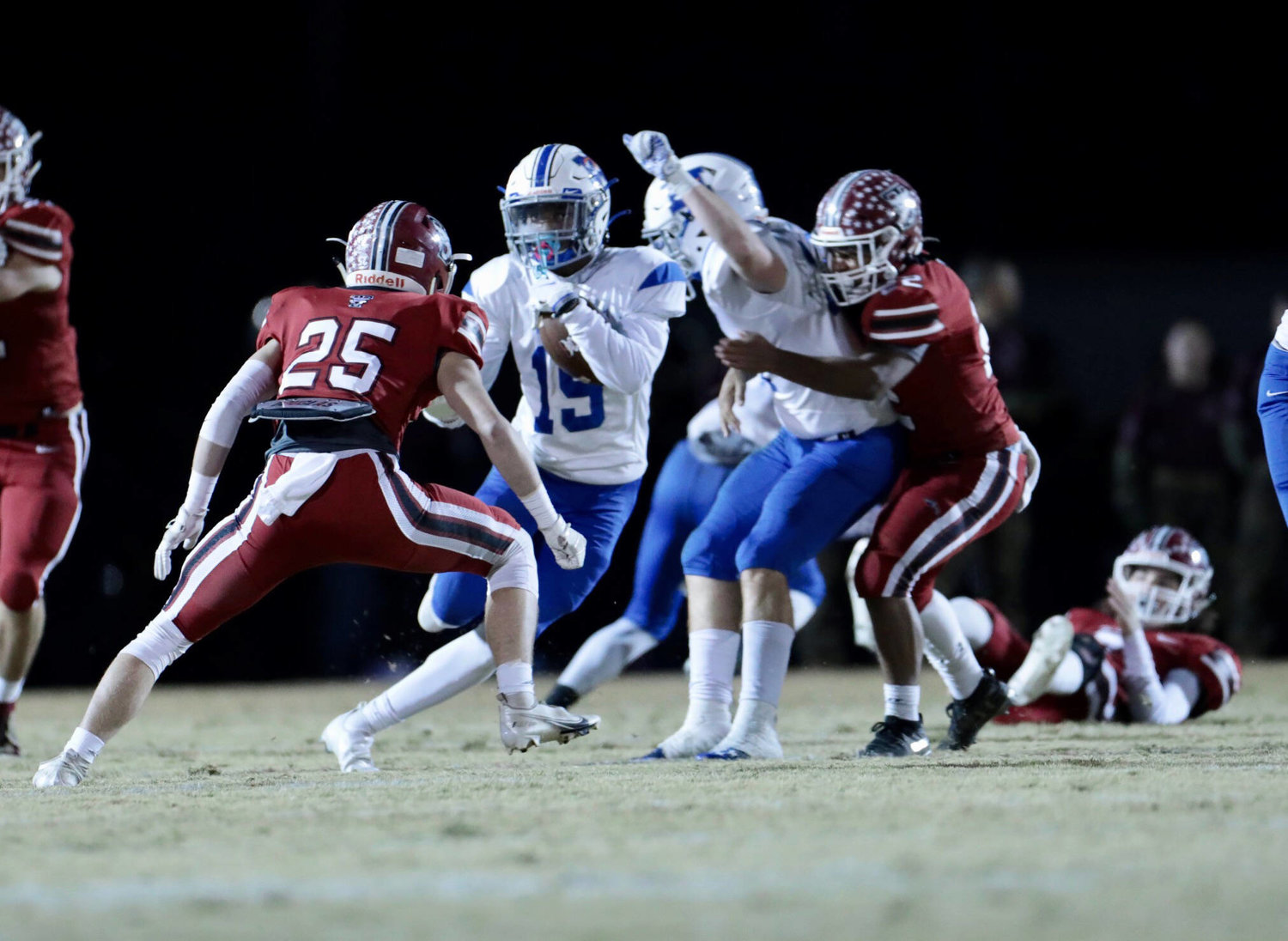 Casey Southerland (19) makes a catch and looks for some daylight to run through at Tullahoma Friday night. 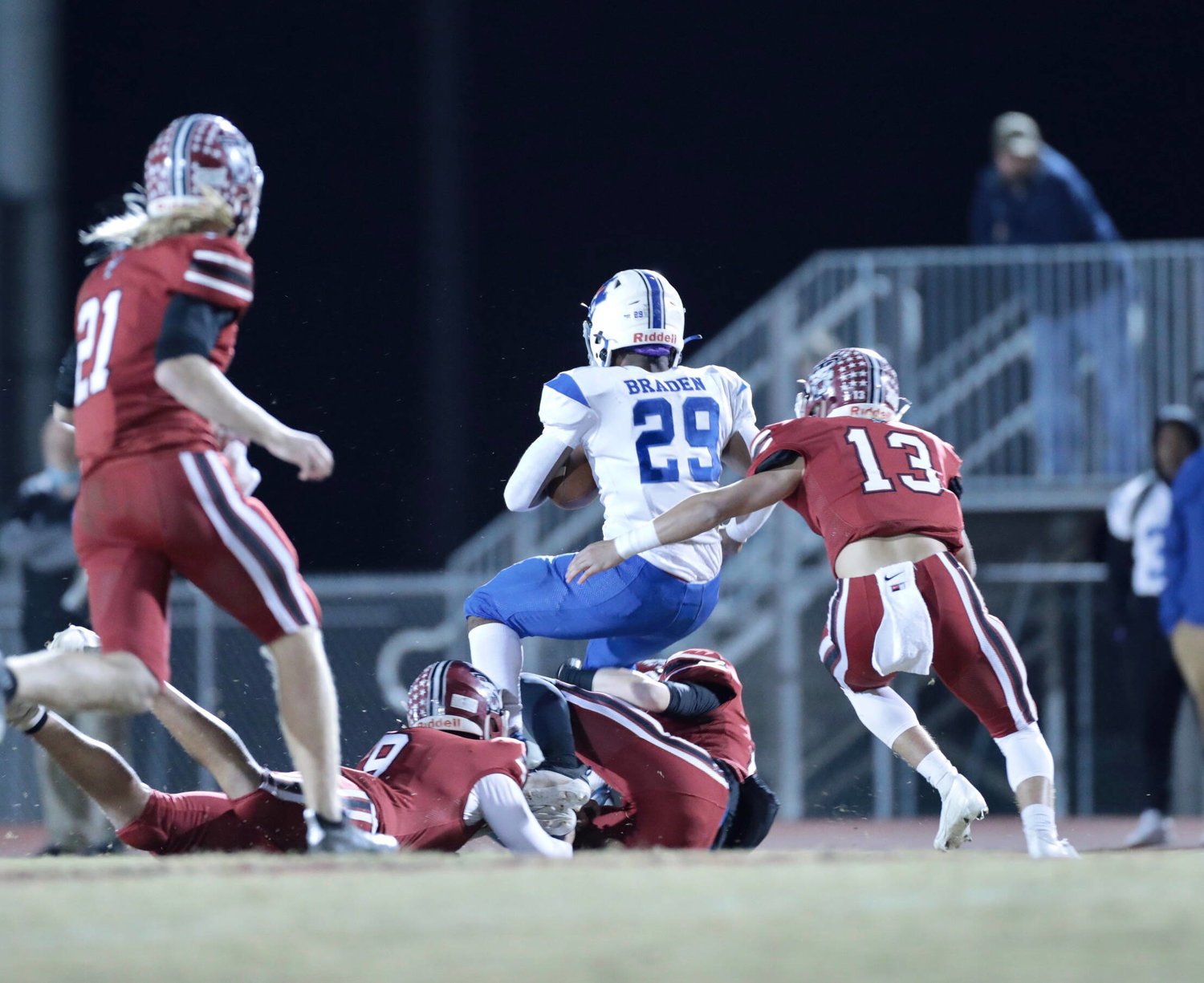 Demari Braden (29) tries to break out of a four-man Tullahoma tackle. 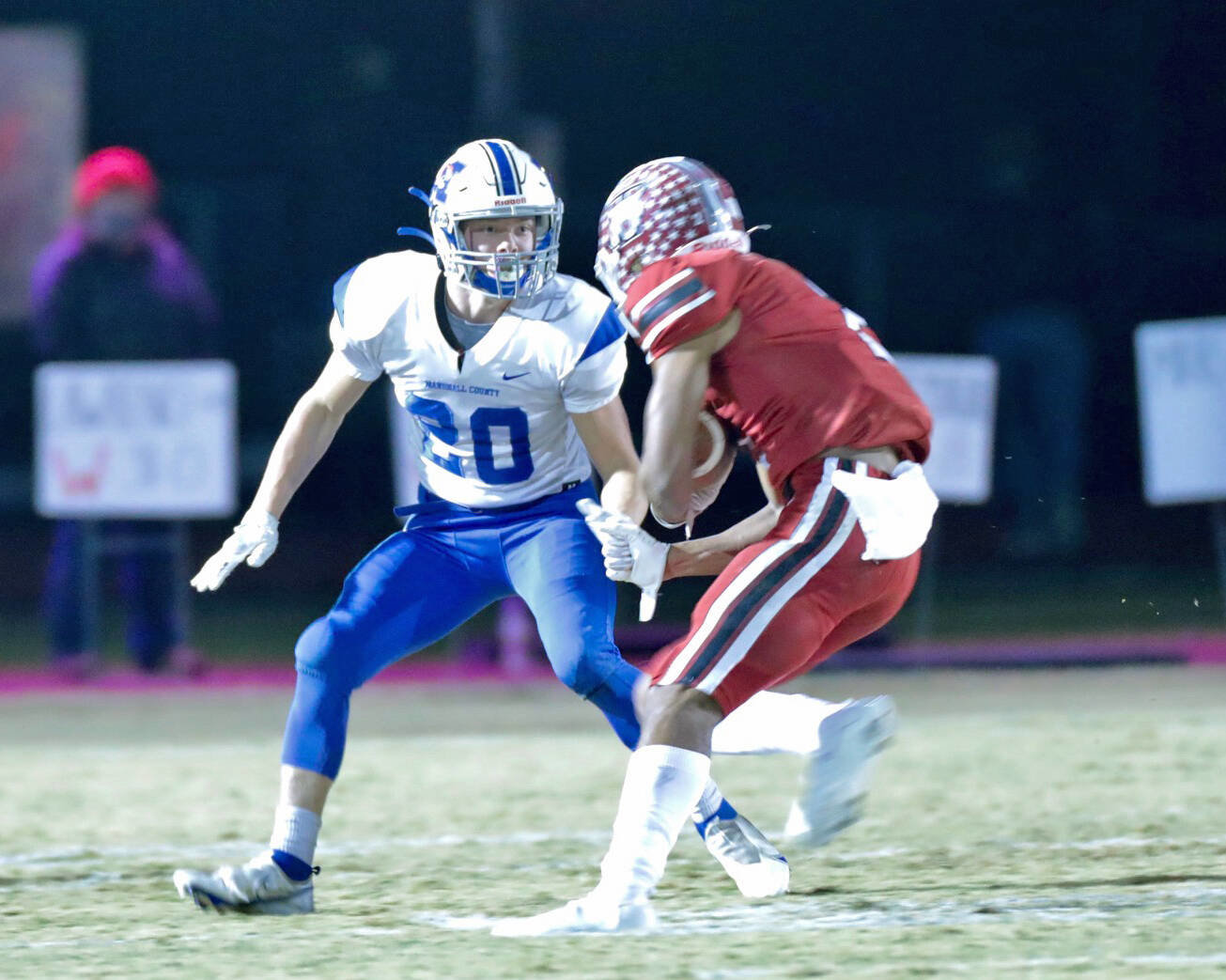 For the second time in three years, Marshall County (9-3) make the trek to Coffee County to face Tullahoma (12-0) in the second round of the Class 4A state playoffs.

Unlike the 2018 matchup where the underdog fourth-seeded Tigers took the game into the final minutes of a 16-14 loss, Friday's matchup was all Wildcats all the time in a lopsided 35-7 win for the number one ranked team in class 4A.

The Wildcats welcome fellow region member Nolensville (9-3), who knocked off region 3/4A top-seed DeKalb County (7-5) with a berth in the state semifinals om the line.

The Tigers have now bowed out early in the second round of the playoffs for the third straight season following three consecutive semifinal berths under seventh-year coach Thomas Osteen.

Marshall County has made the playoffs all seven seasons during Osteen's tenure in Lewisburg.

The Tigers 35-28 loss to Nolensville in the regular season finale after holding a seven point lead with 10 minutes remaining had major implications as a Marshall County would have held off a Tullahoma rematch until the state quarterfinals.

Tullahoma finished with just 206 total yards, but the Wildcats’ defense held the Tigers to a season low 120 total yards of offense.

Sophomore running back Demari Braden was held to just 35 yards on the ground on 15 attempts while senior running back Connor Hilton, who had not tallied a carry since the midseason mark, finished the game with seven consecutive carries for the Tigers’ only touchdown on the night.

The Tigers defense limited Tullahoma quarterback Ryan Scott to just 42 yards and an interception on 2-of-4 attempts, but Scott added 58 yards on eight rushing attempts.

The key to the Tigers game plan was to slow down Mr. Football semifinalist Jakobe Thomas, but the senior running back torched the Tigers for four rushing touchdowns on just 13 carries for 72 yards along with a 20-yard reception, a 51-yard kick return, and 33 punt return yards on three returns.

The one-two threat of Thomas and Scott combined for 130 yards on the ground while the rest of the team combined for just 43 yards on eight carries from five different players.

The Wildcats set the tone on the opening drive of the contest, going up 7-0 just five minutes in behind a nine-play drive that culminated with a 3-yard touchdown plunge.

The Tigers looked sharp on its first possession of the game as Hammons orchestrated a 15-play drive down to the 3-yard line before the drive stalled and Marshall County turned the ball over on downs.

The opening drive would be the highlight of the night for the visitors from Marshall County as the Tigers would shoot themselves in the foot time and time again as the Wildcats ran away with the game.

The Tigers finally broke up the Tullahoma shutout with seven minutes remaining as Hilton put the team on his back for seven straight plays, culminating in a 3-yard touchdown run for the 35-7 final.

The last two playoff runs have been disappointing for the Tigers with Marshall County heading into the 2019 playoffs with two losses by a combined 10 points (36-30 loss versus Shelbyville and 14-10 loss to Giles County) and the number one seed before a last second loss to underdog DeKalb County.

Region 5-4A will look much different in 2021 as both Spring Hill and Nolensville will move up to the 5A ranks and Maplewood moving down to 3A, leaving just Tullahoma and Lawrence County from the old region 4-4A moving to the new region.

The Tigers will now contend with Tullahoma and Lawrence County along with newcomers Creek Wood, Montgomery Central, Greenbrier, Hillwood, Glencliff and perennial powerhouse Pearl-Cohn, who decided to play up a classification despite having mid-level 3A enrollment numbers, likely to avoid the yearly roadblock to the 3A title, Alcoa.

But the Tigers cupboards will be anything but bare in 2021.

Three-year starter Bryson Hammons will return for the fourth season under center after throwing for 1,339 yards, 16 TDs, and seven interceptions as a junior in a run-dominant offense.

Demari Braden, who solidified the starting role midway through the 2020 season, will enter his junior season as the undisputed starter after turning in 536 rushing yards, nine scores, and a team-high 54 points scored as a sophomore.

Lamarion Pierce will be counted on as the energy player as a senior following a breakout junior campaign that saw Pierce lead the Tigers 761 all-purpose yards with two receiving touchdowns, one rushing touchdown, and a kickoff return score along with 30 tackles and an interception on the opposite side of the ball.

Big things will be expected out of rising junior Jayden Hart, who showed flashes of brilliance in 2020 with 15 catches for 270 yards and four touchdowns on offense to go along with 45 tackles, 7.5 TFL, and two sacks on defense.

All eyes will be on rising senior Devonte Davis next season as the junior two-way emerged as the leader on defense and a viable offensive threat in 2020.

Davis finished second on the Tigers with 75 tackles, 5 TFL and a team-high three INTs on defense while adding 15 catches for 266 yards and four touchdown catches on offense.

The Tiger will lose a bevy of key players on the defensive side of the ball, starting with all-everything linebacker Christian Stacey, who led Marshall County with 90 tackles, 14 TFLs, 3.5 sacks, and an interception this season.

The defense will also say goodbye to defensive standouts Logan McKnight, Hayden Sheppard, Omari Armstrong, Chandler Davis, and Kaden Whitson but the most severe losses will be felt on special teams with the graduation of kicker Jon Estes and punter Joseph Gold.