Marshall County squared off with Fayetteville City in a battle of the Tigers Thursday night at the Dottie Kelso Memorial Gymnasium in Lewisburg in the second game of the twin bill for neighboring county schools.

Marshall County used a 6-0 run late the first half and poured it on in the second half to come away with a 75-36 victory over Fayetteville. 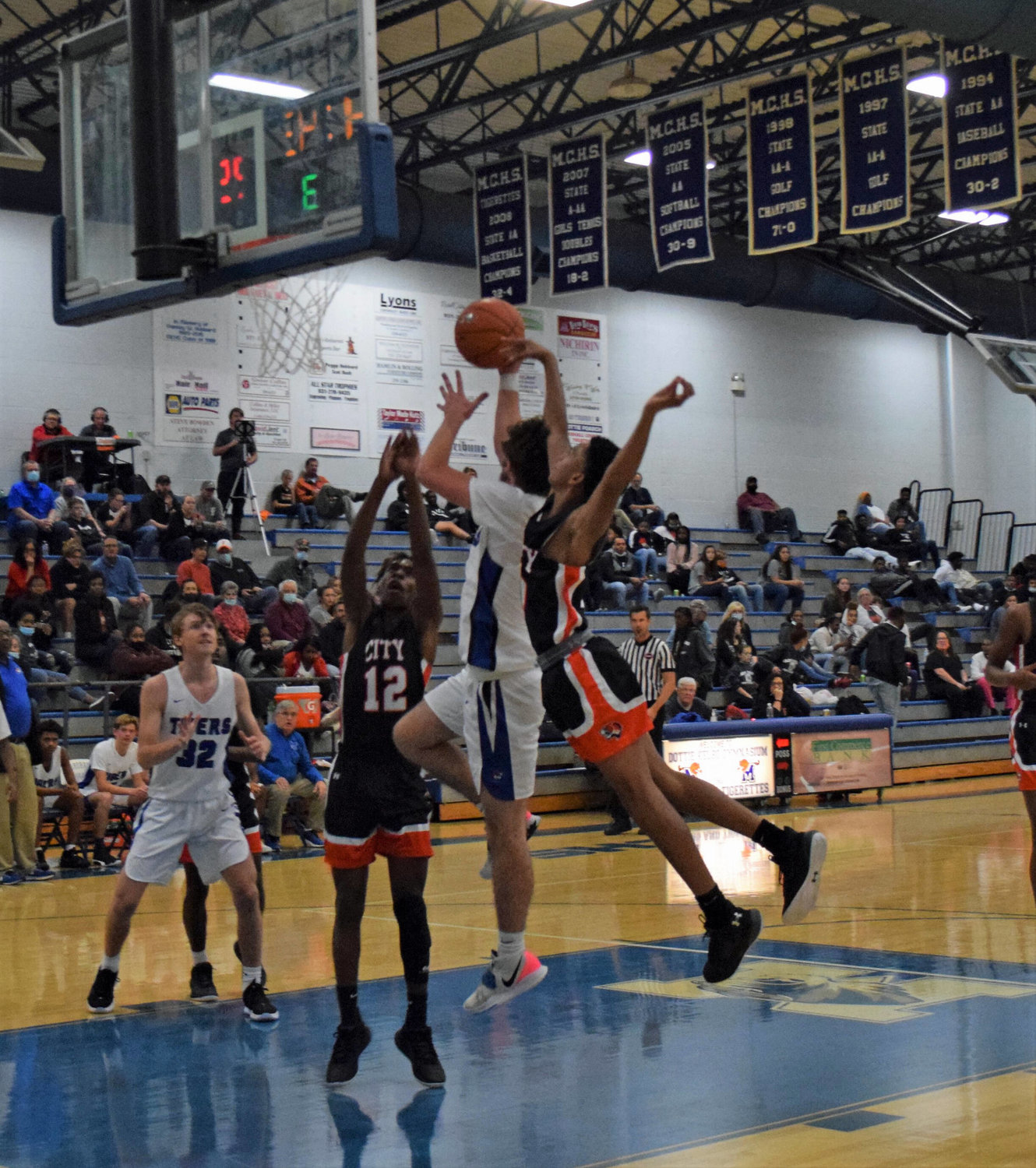 Marshall County senior Bryson Hughes goes up for two of his game-high 18 points in the Tigers’ first win of the season.
Tribune photos by Dennis Holley 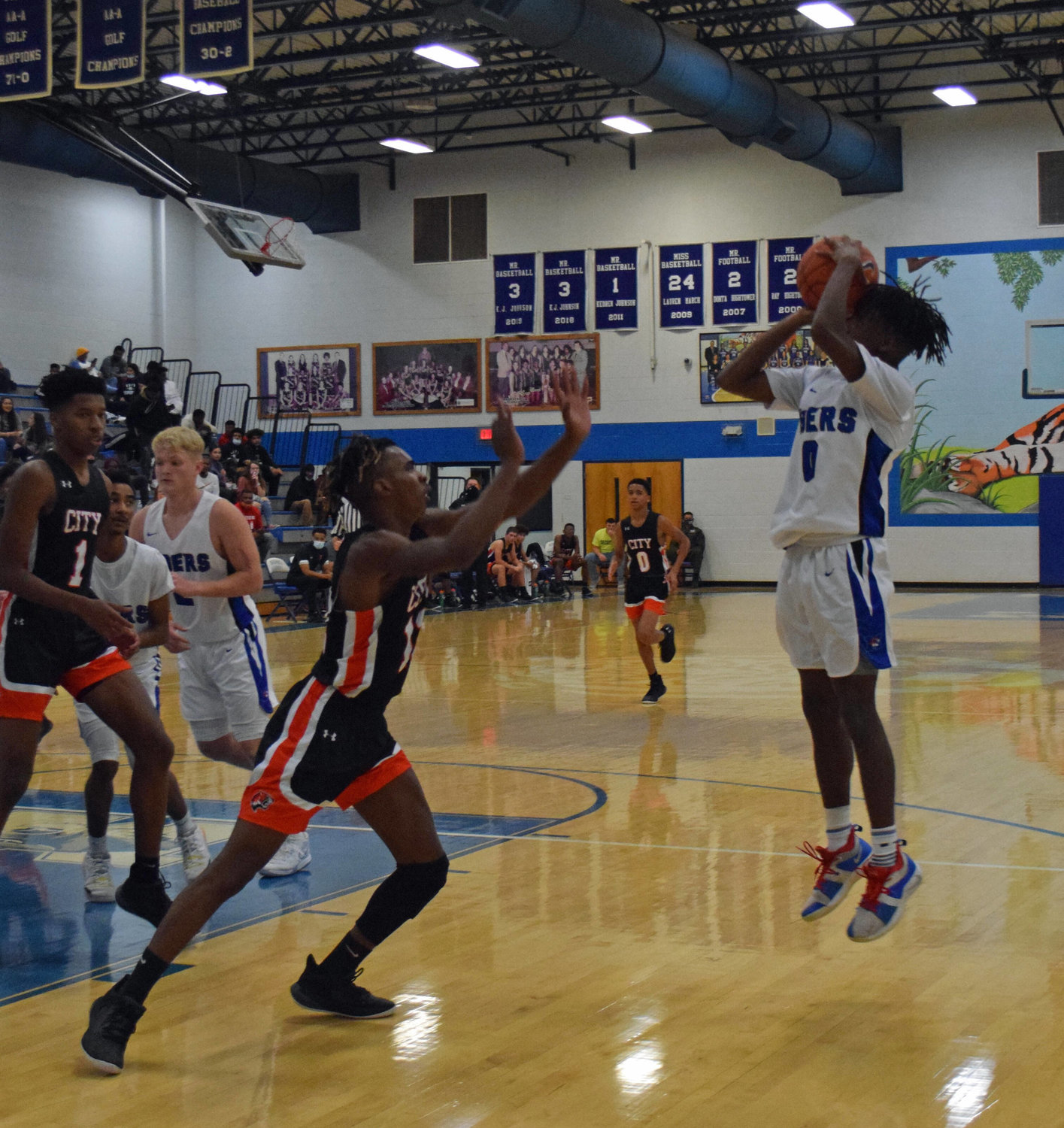 Tiger junior guard Omari Alred (0) pours in a jumper for two of his 11 points in the contest.
Previous Next
Posted Tuesday, November 24, 2020 11:00 pm
By Dennis Holley Tribune Correspondent

Marshall County squared off with Fayetteville City in a battle of the Tigers Thursday night at the Dottie Kelso Memorial Gymnasium in Lewisburg in the second game of the twin bill for neighboring county schools.

Marshall County used a 6-0 run late the first half and poured it on in the second half to come away with a 75-36 victory over Fayetteville.

MCHS coach Lavon King when asked how it felt to win by such a wide margin said, “We haven’t had one of these in a while and it was good to have one where you relax a little in the fourth quarter and get everybody in to play.”

The first quarter saw both teams appearing to be on equal footing as MCHS came out shooting with Hurt dropping in five points on two baskets and a free throw, while Kaamil Hazel sank a basket and Hughes warmed up with a 3-pointer.

Layne also added a basket as Fayetteville took a 14-12 lead when the buzzer sounded to end the first quarter.

The second quarter saw both teams keeping a hot hand, but with 4:25 left in the half, MCHS caught up with a basket by Alred that tied the score at 19-19.

Lewisburg got field goals by Davis, Ethan Spivy, and Hazel as they took a four-point lead 27-23.

The hometown Tigers stayed hot as they reeled of a 6-0 run with less than two minutes left until halftime to lead 33-23 at the break.

“We went on that little run, I think 6-0 (to end the half) and then started to knock down some 3’s (in the third quarter), which we had not done,” King said. “Bryson Hughes did a really good job knocking down three’s as well as Omarion (Alred) and Devonte (Davis).”

“Davis coming in from football is a special kid that is able to shoot and handle the ball. He wanted to play Tuesday night, but I told him to be patient and wait a couple of days. It’ll be alright.”

The third quarter saw the MCHS Tigers pour gas on the fire as they lit up the net for 25 points with Alred bombing in three 3-pointers, Hazel knocked down a three and Hughes added three field goals, two 3-pointers and sank a free throw.

The hot shooting pretty much put the game out of reach and King emptied the bench in the fourth quarter as Blake Hardison sank a three-pointer and Micah Wright added two baskets.

Asked about the pandemic and how it has impacted his preparation for this basketball season King said, “The kids have done well to come in and practice, to do the things we asked about temps and keeping social distancing.”

“One thing is that the kids like being around each other and we’ve got some kids that can contribute so they don’t want to miss practice.”

King added, “We got Columbia on Tuesday night so we will see how things go.”