Tigers battle adversity to down Greenbrier on Senior Night

LEWISBURG — In their regular season finale, the Marshall County Tigers (9-1, 7-1) had to overcome a stingy Greenbrier (5-5, 5-3) defense, as well as plenty of adversity, but in the end, the …

Tigers battle adversity to down Greenbrier on Senior Night 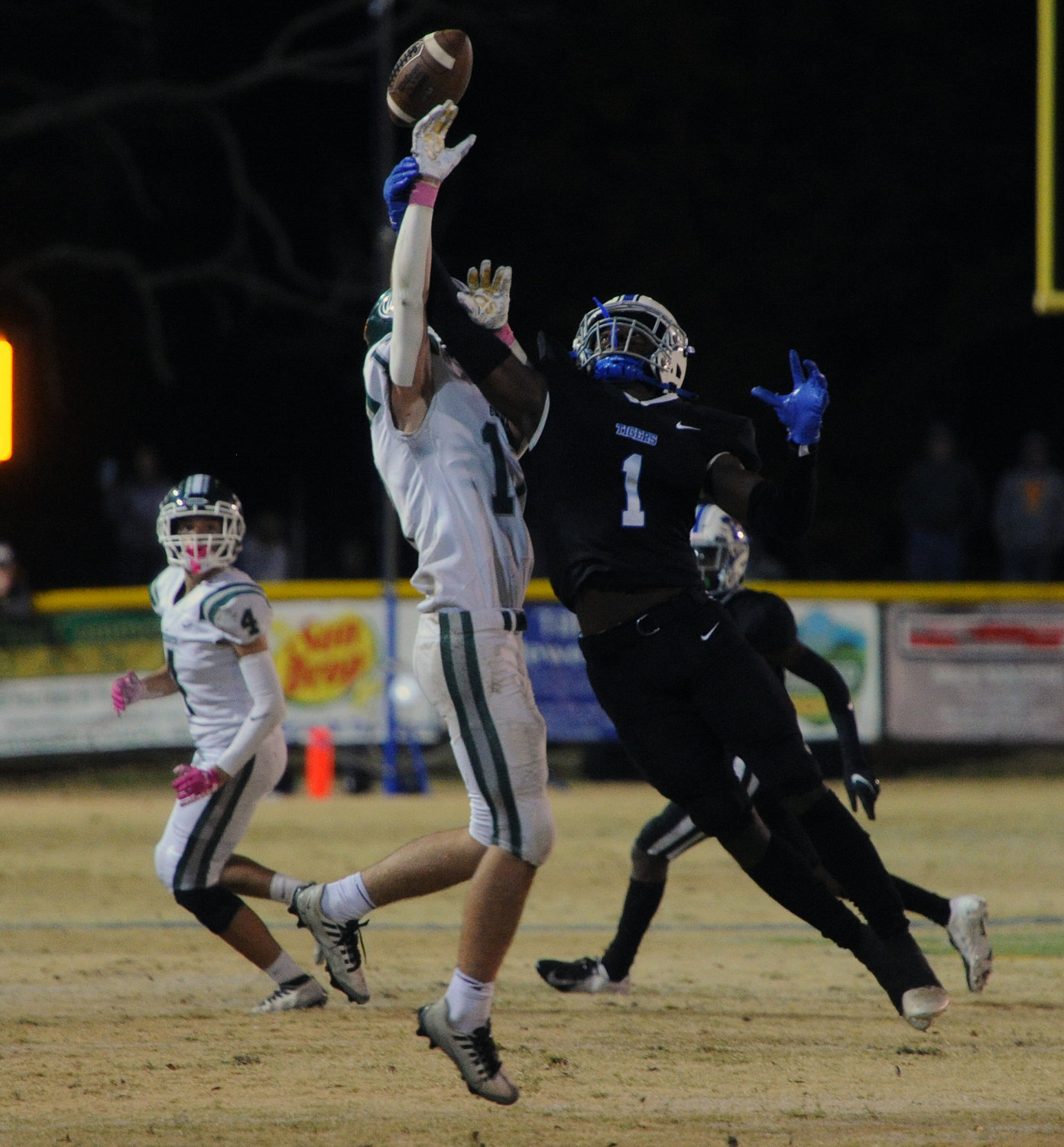 Montai Vaughn breaks up a key pass in the second half against Greenbrier on Friday night.
Tribune Photo by Chris Siers 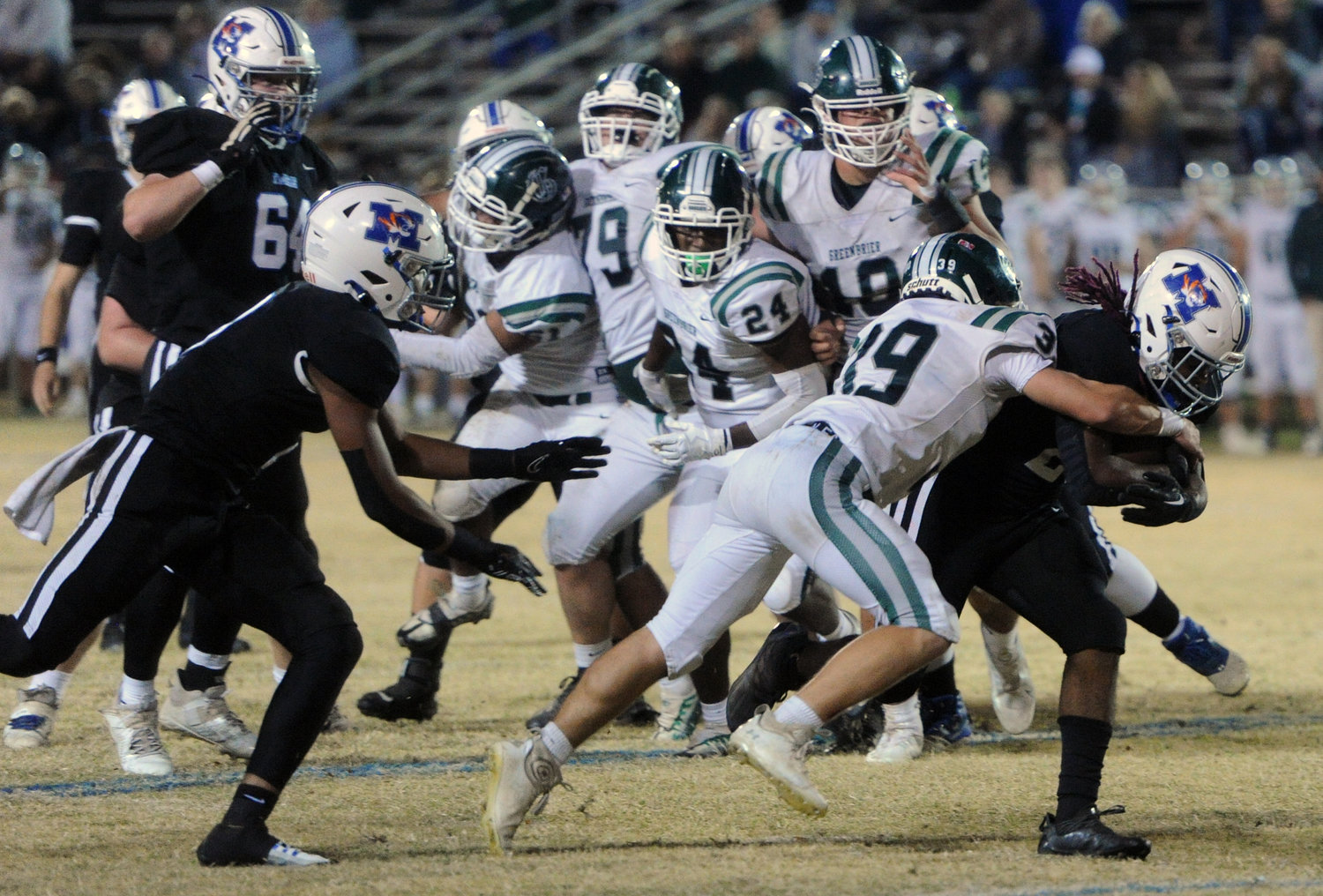 Demari Braden drags the Greenbrier defense along as he charges forward. He totaled 116 yards on 24 carries for the Tigers.
Tribune Photo by Chris Siers 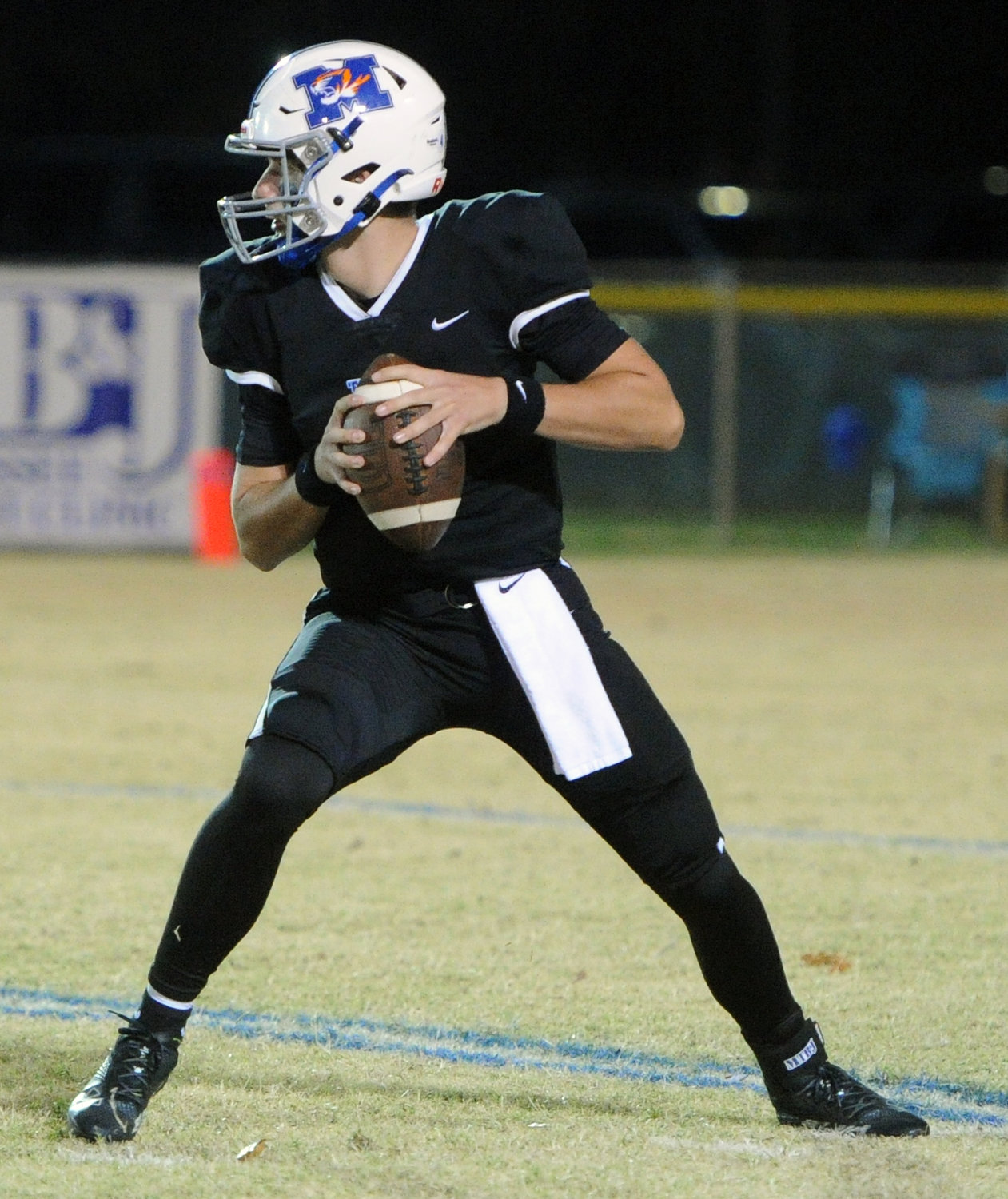 Quarterback Silas Teat surveys the field before firing a pass. He completed 15-of-21 attempts and had two touchdown passes.
Tribune Photo by Chris Siers 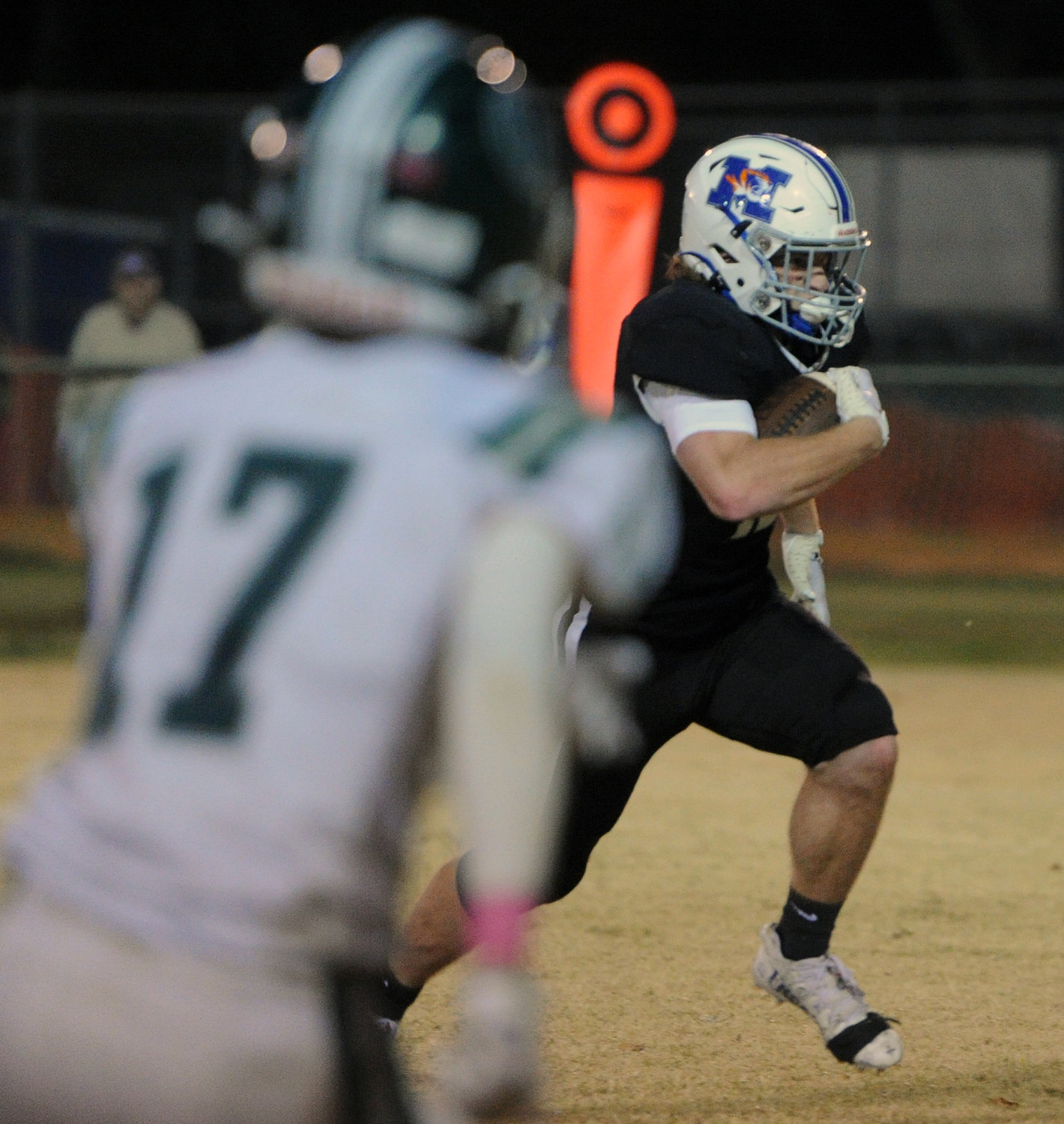 Senior tight end John Morgan Thomas turns on the jets as he heads for paydirt on a 27-yard touchdown pass from Silas Teat.
Tribune Photo by Chris Siers 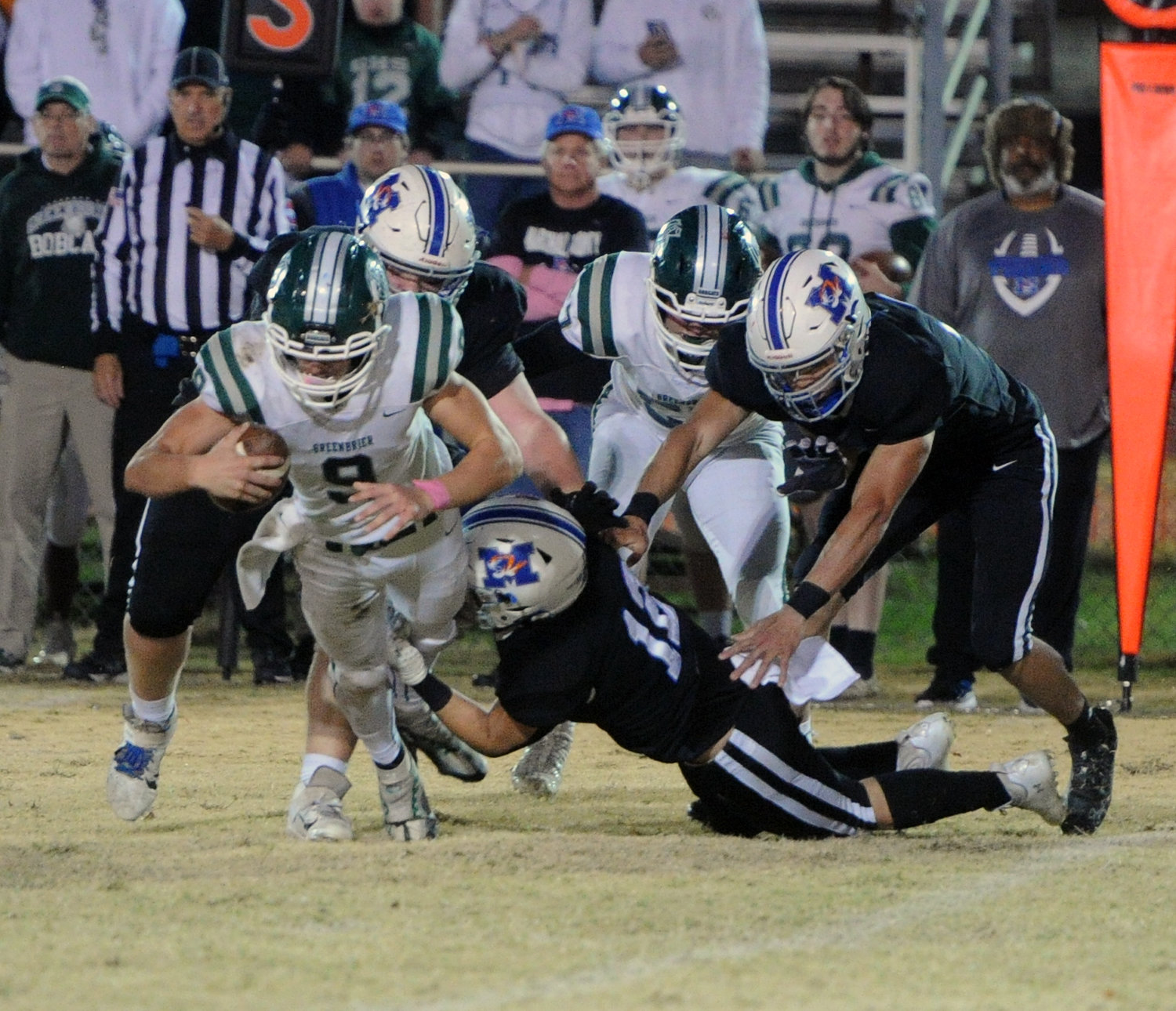 A host of Tiger defenders bring down Bobcat quarterback Nolan Carson for a loss in the backfield.
Tribune Photo by Chris Siers
Previous Next
Posted Sunday, October 30, 2022 12:01 pm
By Chris Siers ~ sports@t-g.com

LEWISBURG — In their regular season finale, the Marshall County Tigers (9-1, 7-1) had to overcome a stingy Greenbrier (5-5, 5-3) defense, as well as plenty of adversity, but in the end, the home team was able to put a win together on Senior Night and defeat the Bobcats, 28-7.
“It definitely wasn’t the cleanest of games, but Greenbrier is a good football team and is really good on defense. They’re probably one of the best defenses in 4A this year. Our guys took that as a big challenge. We knew we would probably have fewer possessions tonight, so we had to maximize the ones we had and I feel like we did a good job of that,” Tiger coach Thomas Osteen said.
From a blocked extra point, to a botched snap on a punt to 80 penalty yards in the first half, the Tigers had plenty to overcome.
That’s just what they did.
Marshall County built a two-touchdown lead in the first half and played add on in the second half to coast to the win and secure home-field advantage in the opening round of the Class 4A playoffs.
On the stats sheet, it was more of the same for the Tiger offense.
Junior quarterback Silas Teat completed 15-of-21 attempts for 173 yards and a pair of touchdowns, while senior tailback Demari Braden carried it 24 times for 116 yards and a touchdown as well.
Braden put the Tigers on the board with an eight-yard touchdown to cap the game’s opening drive, but a blocked extra point left the Tigers with a 6-0 lead.
Later in the quarter, Marshall County’s drive stalled near its own 42-yard line and on a punt attempt, a mishandled snap set the Bobcats up with first down on the Tiger 23-yard line.
Three plays later, Greenbrier quarterback Nolan Carson faked a handoff and dove into the end zone to finish off a 13-yard touchdown run.
The kick after put the visitors up 7-6, marking the first points the Tigers have allowed in three weeks.
After the Bobcats took the slim lead barely 58 seconds into the second quarter, Teat went to work through the air and found tight end John Morgan Thomas on a 27-yard touchdown pass and a three-yard pass to Jayden Randolph to bump the Tigers’ lead to 21-7 by the end of the half.
With the clock-draining offense the Bobcats ran, the Tigers were able to run just six plays in the third quarter and after forcing a turnover on downs with 13 seconds left in the quarter, Marshall County took over on its own 30-yard line and orchestrated a 14-play scoring drive that Randolph finished with his second touchdown of the night—a one-yard run with 6:37 for the final score of the night.
Greenbrier relied on the efforts of Dalton Wilbur, whose small frame powered the Bobcat running game all night.
Jakavan Curry led the Tigers on defense, recording seven tackles, while senior Trey Warner recorded 1.5 tackles for loss.
“He’s a gamer. He’s a small kid, but he’s a good football player,” Osteen said.
Friday night’s win put a cap on what’s been a spectacular season that led the Tigers to a 9-1 finish and second-place in Region 5-AAAA.
“The special ingredient for this team has been our chemistry. We have a great senior class and upperclassmen that want to come to work every day and get better. I feel like we’ve gotten better each week all year. We wanted to win the region, but even more than that, we wanted to be playing our best football at the end of the year and I think for the most part, we’re doing that,” Osteen said.
That second-place finish in the region secured a first-round home playoff game, in which the Tigers will host Chester County on Friday night.
“We’re really excited our team has earned the right to play seven more days,” Osteen said.
While Friday night’s win finished the regular season on a high note, it was even more important a win for a senior class that has delivered week in and week out for four years.
“It’s a class that represented our school well in the classroom and in the community. I don’t know if there are a bunch of NFL players in that class, but there’s a bunch of winners that are good high school players that show being high-character people matters on the scoreboard too. I think that’s one of the biggest reasons we’re a 9-1 football team,” Osteen said.
The Tigers will begin their postseason trek against Chester County (6-4) on Friday night at Preston Hopkins Field.