CORNERSVILLE — There were plenty of fireworks in Monday night’s season opener between county rivals Cornersville (0-1) and Marshall County.In the end, the Tigerettes (1-0) had a little … 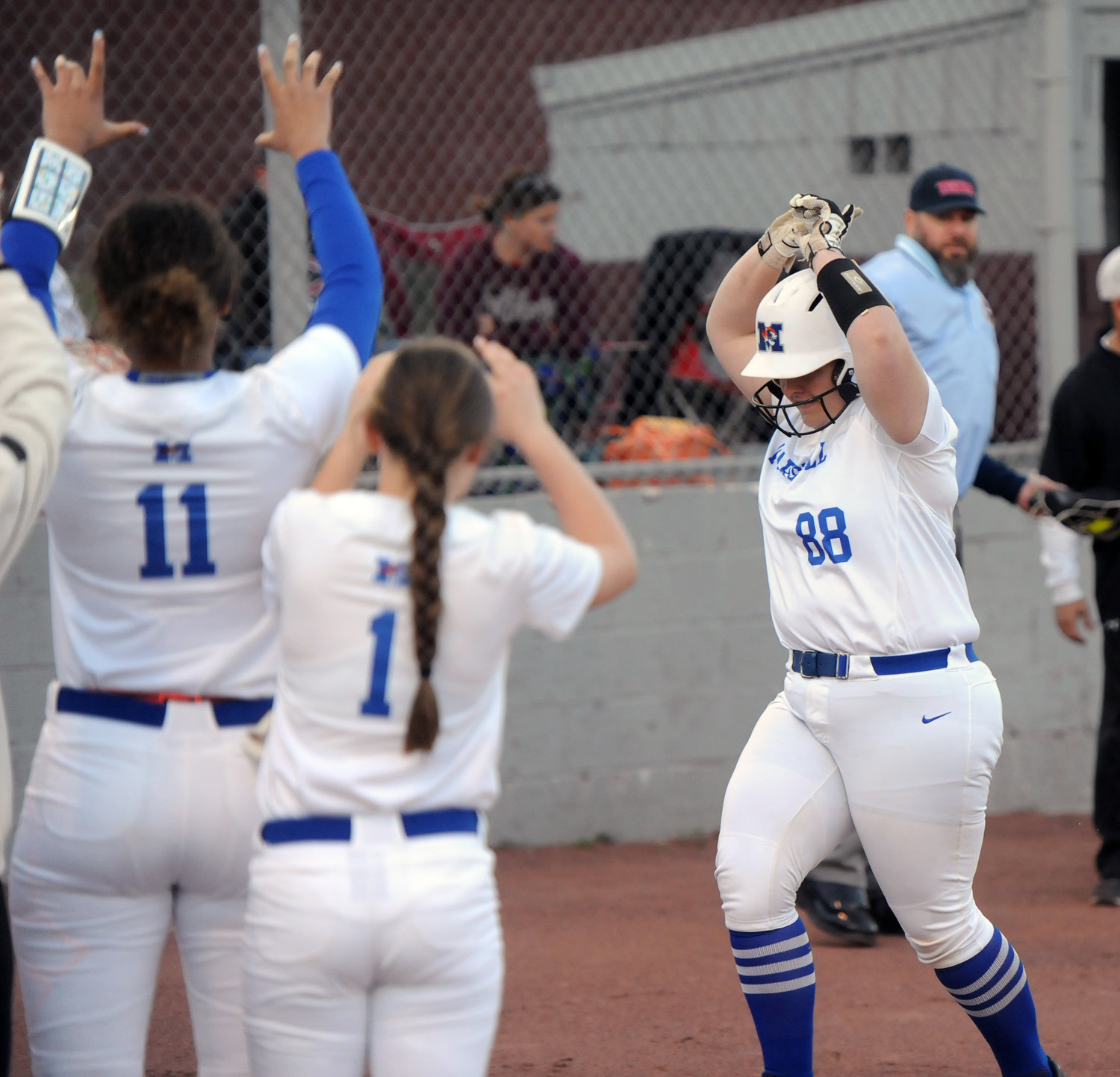 Jahna Meadows-Richardson is greeted by her teammates after a two-run homer in the top of the first inning.
Tribune Photo by Chris Siers 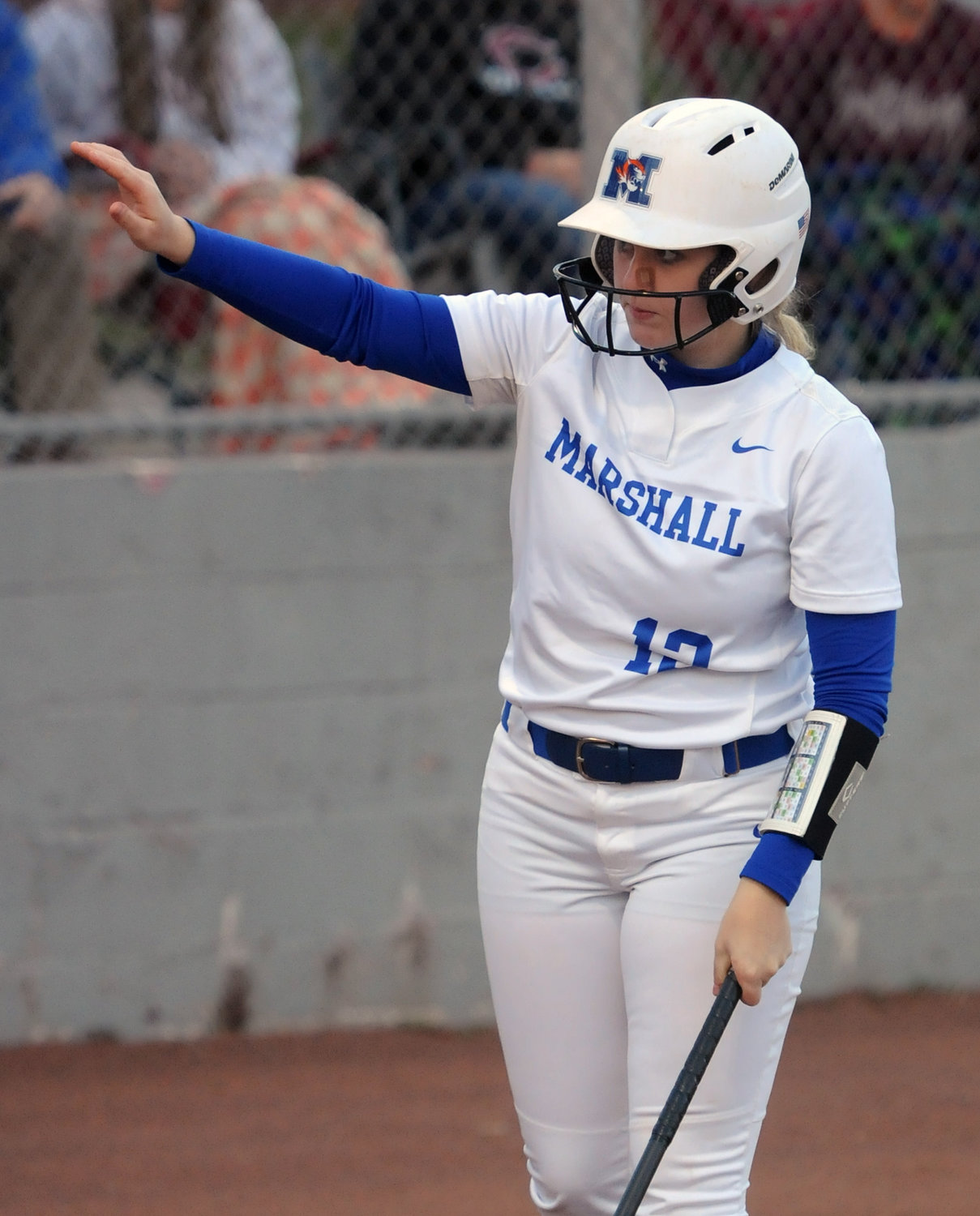 Ellie Luce settles in at the plate during at at-bat. She knocked in two more runs on the Tigerettes' second two-run blast of the night.
Tribune Photo by Chris Siers 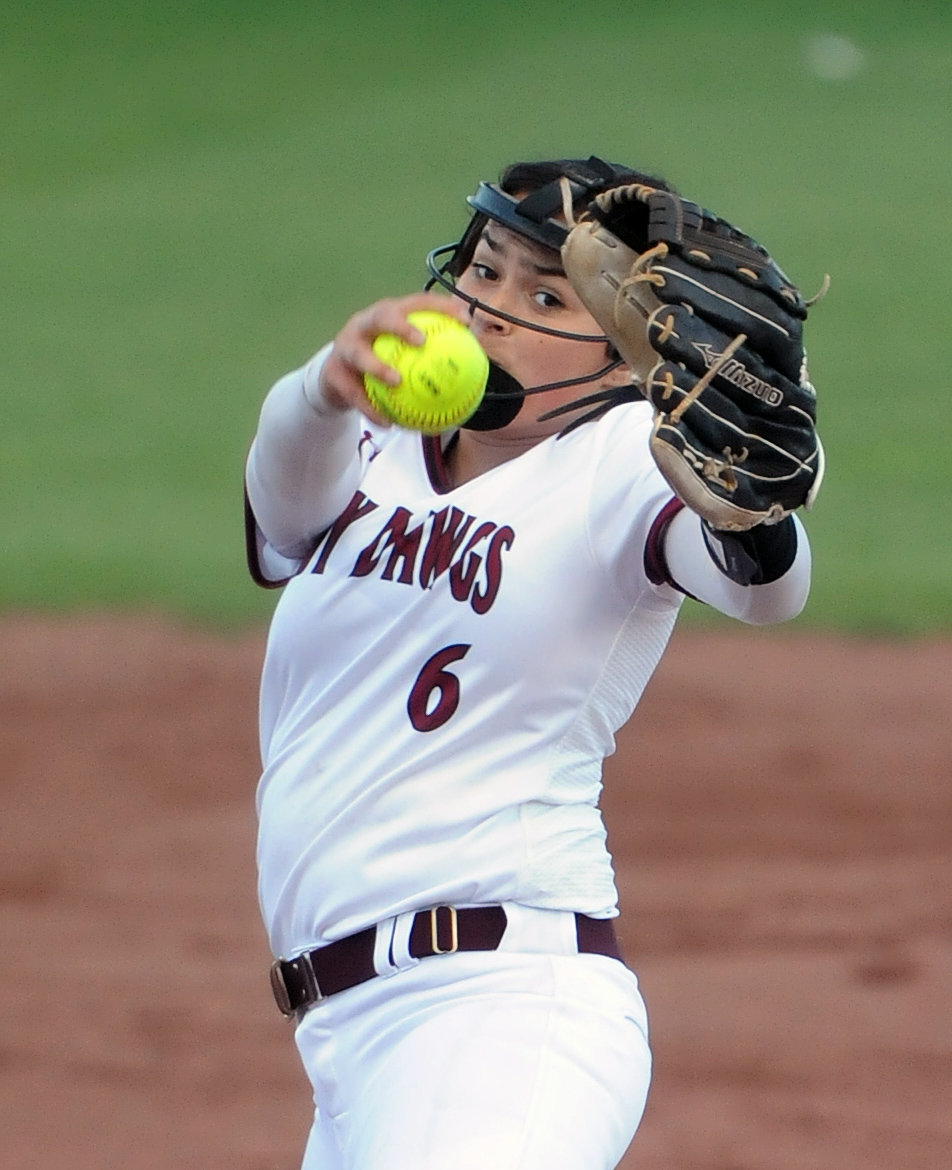 Carmen Ward fires a strike across the plate in the first inning against Marshall County on Monday evening.
Tribune Photo by Chris Siers
Previous Next
Posted Tuesday, March 15, 2022 12:12 pm
By Chris Siers ~ sports@t-g.com

CORNERSVILLE — There were plenty of fireworks in Monday night’s season opener between county rivals Cornersville (0-1) and Marshall County.
In the end, the Tigerettes (1-0) had a little more oomph at the plate and left Frog Bottom with a 13-6 win over the Lady Bulldogs.
The two teams combined for 18 hits and gave fans in attendance plenty of excitement on the scoreboard.
Courtney Lynch got the scoring frenzy started for the Tigerettes when she led off the game with a triple to center-right. She scored the game’s first run on a RBI single by Jessa Lancaster.
Lancaster later scored on a two-run shot to center field by Jahna Meadows-Richardson, giving the Tigerettes a 3-0 lead in the top of the first frame.
Marshall County tacked on two more runs in the second frame when Demiayah Blackburn and Lynch scored on a two RBI single by Mallory Woodward.
Leading 5-0, it was Cornersville’s turn to pad the scoreboard.
Molly Wells led off the bottom of the second with a single to center and scored during the next at-bat on a two-run blast to left.
Hannah Moore later reached on a single and scored on a double by Cora Duke, cutting the Tigerette lead to two runs after two innings.
While Cornersville was able to rally for three in the bottom of the second, the Tigerettes broke the game open with a five-spot in the top of the third frame and coasted to the seven-run victory.
Taylor pickle drove in a sixth run for the Tigerettes on a RBI single and Kaniyah Taylor scored on a sac-fly to bump the Marshall County lead to 7-3.
Lunch connected on her second triple of the night and knocked in two more runs before scoring the final run of the inning on a single by Woodward.
The Tigerettes added two more runs in the fourth inning on a two-run homer by Ellie Luce, bumping the Tigerette advantage to 12-3 before the Lady Bulldogs broke the scoring streak on a RBI double by Alisha Price in the bottom of the fourth.
Marshall County added one final run in the game after Lynch connected on a one-out triple, her third of the game, in the top of the seventh inning before scoring on a double by Woodward.
Jayli Childress answered in the bottom of the seventh with a two-run homer, Cornersville’s second of the night, but just couldn’t muster up enough offense to make a run at the Tigerette lead.
Lynch led Marshall County with four runs scored, while Luce and Meadows-Richardson had the loudest cracks of the bat for the Tigerettes and blasted home runs in their season debuts.
Lynch went 3-for-5 on the night with three triples and two RBIs, while Woodward also went 3-for-5 with four RBIs.
Pickle got the start in the pitcher’s circle and went three innings. She allowed three earned runs on four hits before Haylee Hobby took over and pitched the final four innings in relief.
She gave up just three hits and two earned runs, but struck out two in the process.
For the Lady Bulldogs, Ward and Childress led Cornersville at the plate, each driving in a pair of runs on two-run homers.
Carmen Ward got the start in the pitcher’s circle and went 2 2/3 innings before Duke took over and pitched the final 4 1/3 innings.
Marshall County returns to action on Thursday evening against Columbia Central for the home opener at 7 p.m., before closing the week at Forrest on Friday night.
Cornersville returns to Frog Bottom on Thursday night and hosts Fayetteville City at 6 p.m.