Tigerettes’ take control in 3rd, hold on vs. Mt. Pleasant

LEWISBURG — After a Titanic struggle to start the game on the offensive end of the court, the Marshall County Tigerettes overcame an early deficit against Mt. Pleasant and outlasted a late push …

Tigerettes’ take control in 3rd, hold on vs. Mt. Pleasant 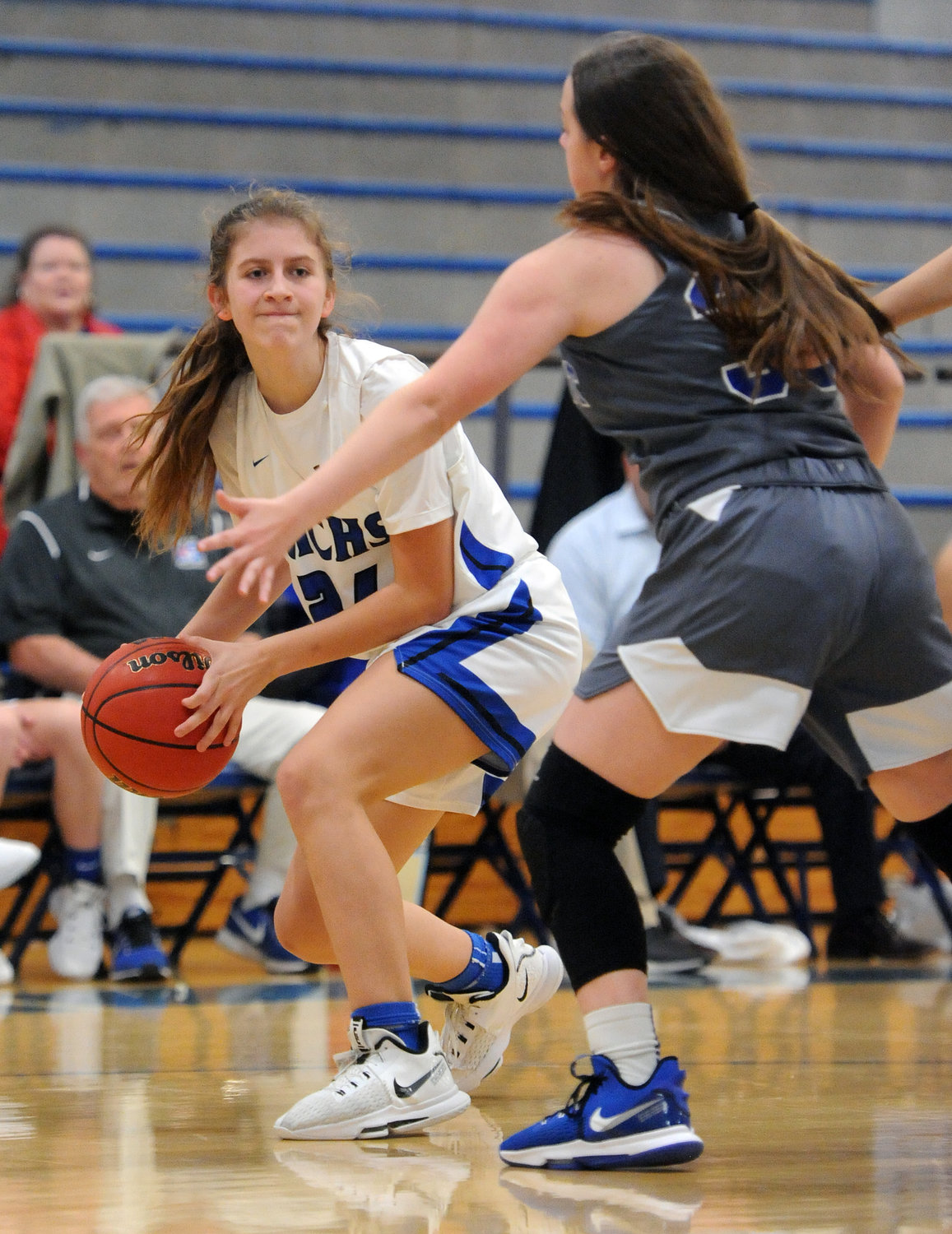 Maggie Steely tries to feed the ball to the low post against Mt. Pleasant in the first game in the Marshall County Christmas Classic.
Tribune Photo by Chris Siers
Posted Friday, December 24, 2021 4:05 pm
By Chris Siers ~ sports@t-g.com
LEWISBURG — After a Titanic struggle to start the game on the offensive end of the court, the Marshall County Tigerettes overcame an early deficit against Mt. Pleasant and outlasted a late push by the Lady Tigers for a 31-25 win in the Marshall County Christmas Classic.
Offenses were slow out of the gate for both schools as shots simply wouldn’t fall.
Following a five-minute offensive drought to start the game, Erianna Greer was fouled with 2:47 left in the opening quarter, but couldn’t connect on either attempt.
On the following Mt. Pleasant possession, Kenzie Gray broke the scoreless stalemate with a 3-pointer from the top of the key at the 2:04 mark of the first quarter.
Addison Workman followed with a fast break layup to put the Lady Tigers up 5-0 as time continued to wind toward the end of the first frame.
Maggie Steely put the Tigerettes on the board with a jumper with 42 seconds left in the quarter, but the score held at 5-2 after the first quarter.
Having struggled through the first quarter, Marshall County’s offense found some consistency in the second period through the efforts of Kayla Keiler, who banked 6 of the Tigerettes’ 12 points.
But even with Keiler’s efforts, Mt. Pleasant was able to hang tough and the score remained deadlocked at 14 apiece at the intermission.
It wasn’t until a 10-2 run in the third quarter that Marshall County was able to pull ahead for good.
The 10 points was spread among four players, with Keiler banking four points in the quarter.
Although the Tigerettes built a double-figure lead into the fourth quarter, Mt. Pleasant made a strong push that cut the Marshall County advantage to just two possessions in the closing minutes.
It was the efforts of Maggie Simpson who scored seven of the Lady Tigers’ nine fourth-quarter points that allowed Mt. Pleasant to cut into the hosts’ lead.
Still, Marshall County got five fourth-quarter points from Demiyah Blackman to hold on for the six-point win.
Marshall County played a second game in the Marshall County Christmas Classic on Tuesday, however results were unavailable at press time.
Mt. Pleasant 5   9   2   9 — 25
Marshall Co. 2 12 10   7 — 31
Mt. Pleasant: Addison Workman 9, Maggie Simpson 7, Kenzie Gray 3, Emari Yanna Rogers 3, Zarena Jones 2, Ayanna Jones.
Marshall Co.: Kayla Keiler 10, Demiyah Blackman 9, Mashawna Ridley 6, Maggie Steely 4, Erianna Greer 4.
3-Point goals: Mt. Pleasant (3): Workman, Rogers, Greer.
Halftime score: Marshall County 14, Mt. Pleasant 14.