Every team inherently has a leader and for the Marshall County High School Tigerette team, that was Lydia Molina during the 2021 season. During the Region 6 A-AA meet, Molina led the Tigerettes to a … 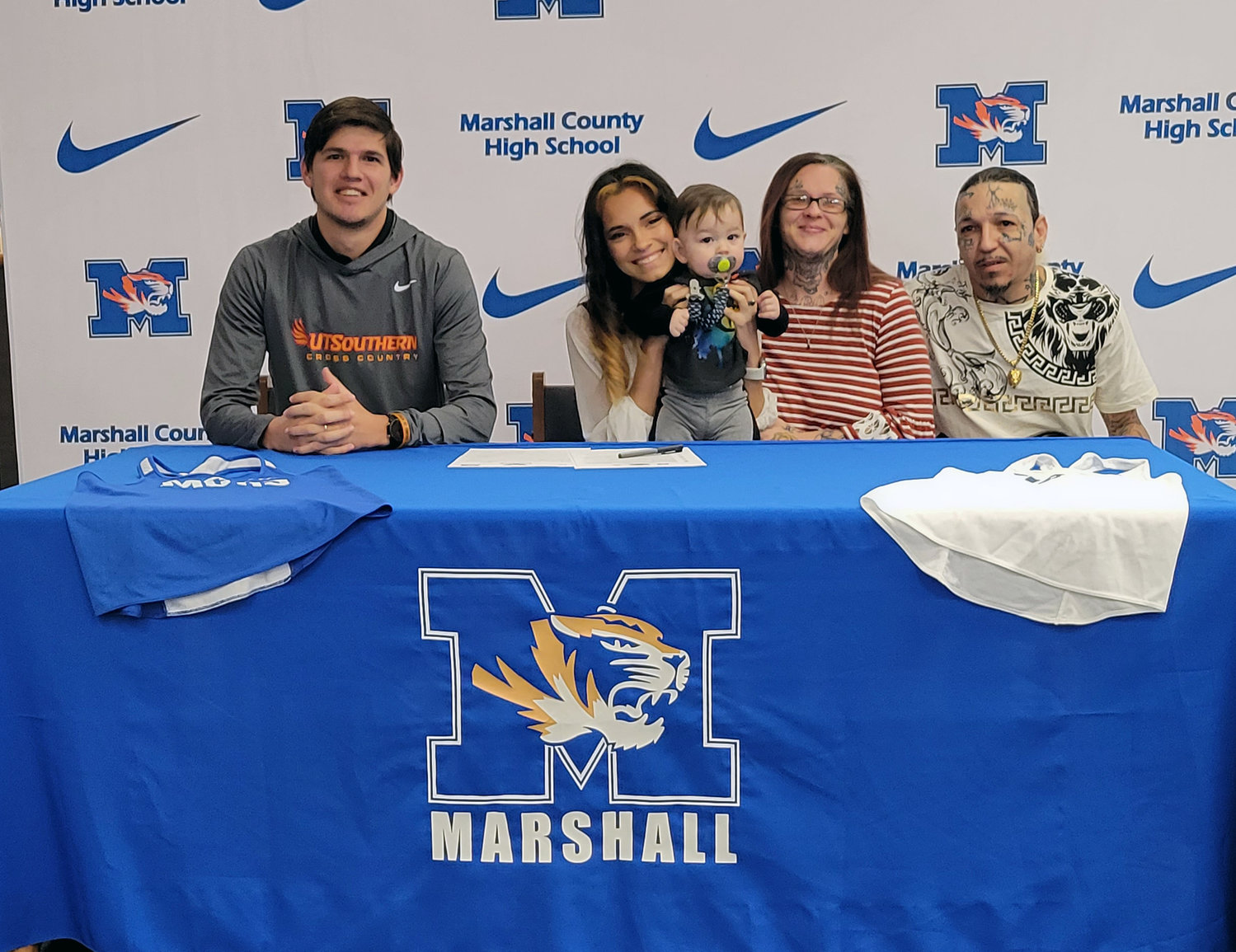 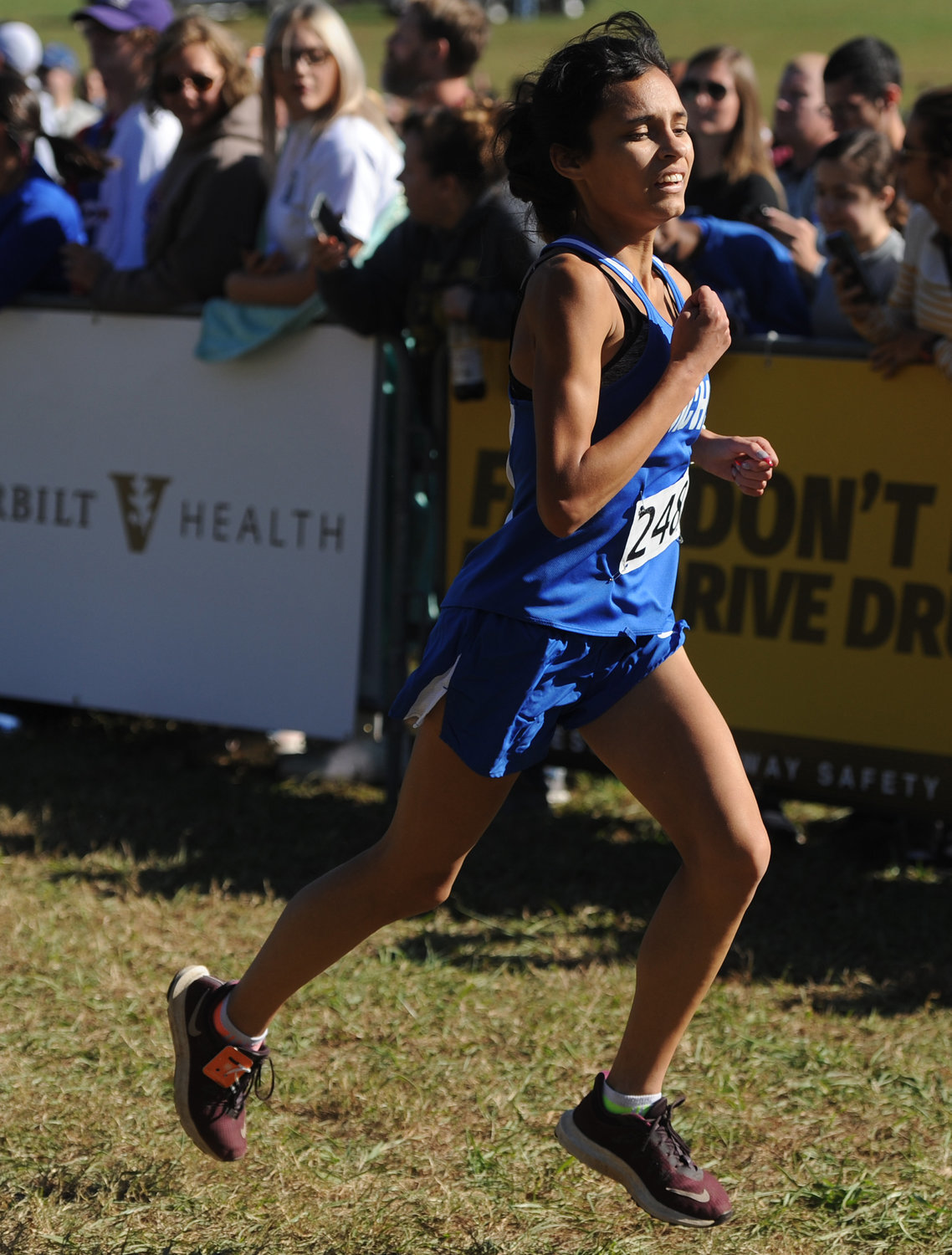 Molina was the top runner for the Tigerette cross country team that qualified for the Class A-AA state meet in 2021.
Tribune Photo by Chris Siers
Previous Next
Posted Monday, January 24, 2022 9:18 am
By Chris Siers ~ sports@t-g.com

Every team inherently has a leader and for the Marshall County High School Tigerette team, that was Lydia Molina during the 2021 season.
During the Region 6 A-AA meet, Molina led the Tigerettes to a second-place region finish, which secured their slot in the Class A-AA state meet.
While her senior cross country season ended on a high note at the state’s highest level of competition, Molina’s career will continue as she signed her letter of intent to continue her cross country career at UT-Southern.
“I’m excited and nervous. I’m excited because I worked my way up. I used to run at 30 minutes and now I’m graduating at 22 minutes in three miles and I got a scholarship,” she said.
Joining Molina at UT-Southern will be fellow Marshall County senior Krew Capps, who also signed his letter of intent to make it official.
Firehawk head coach Justin Watson joined Molina at her signing and expressed his excitement for her to get to campus later this fall and officially join the roster.
“Krew and Lydia are both excellent signees for our team and newcomers for our team. I fully expect both of them to be integral parts of our success,” he said.
Molina got her start running in middle school on a whim and knew she found her niche once settling into the Tigerette program.
“I’ve been running for four years. In middle school, I just had this feeling when they held tryouts. I just wanted to go and try it,” she said.
From her earliest days in middle school to finishing her high school career in the state meet, she’s been the consistent leader of the Tigerette program, both on the course and in the halls as well.
“They meant a lot. Both of them were our No. 1 runner. They’re a great loss for our team, but I know our underclassmen are ready to step up and fill their shoes. They’re great leaders. They were always at practice and always did everything they were supposed to do. They went above and beyond outside of practice and were just role models for our kids within our building, too,” Marshall County coach Heather Denton said.
While Molina finished her season with a 23:00 final time at a difficult and technical course at Sanders Ferry Park, her best memory came when she hit her time goal of 22 minutes.
“In the Best of Marshall Meet this year, my goal was 22 minutes and I got it that day,” she said.
While there were other schools in the mix when it came time to select a college, in the end it was the campus of UT-Southern that she fell in love with, as well as being close to home.
“I had a school that was interested me in Alabama, but when I walked onto the campus (at UT-Southern) there was something about it that just drew me in and I was like, I’ve got to go here,” she said.
With running being a goal-driven sport, Molina’s focus now shifts to fitting into the college roster and setting her sights higher on the next time goal.
“I just have to keep working. My goal was 22 minutes and I got that. My next goal is 21 and hopefully close to 19 by the end of college,” she said.
Molina’s signing also carries even mores significance as she becomes the first female runner to sign a letter of intent to run in college.
“It builds up the program and gives us some momentum within our school to hopefully help us recruit the halls. That’s our goal for next year is to get some more kids involved in our program,” Denton said.
For now, Molina plans to keep running and prepare for her upcoming freshman season.
While she’s still months away from officially starting her freshman season, she has a career path picked out and plans on becoming a nurse.
UT-Southern competes in the NAIA and is a member of the Mid-South Conference.