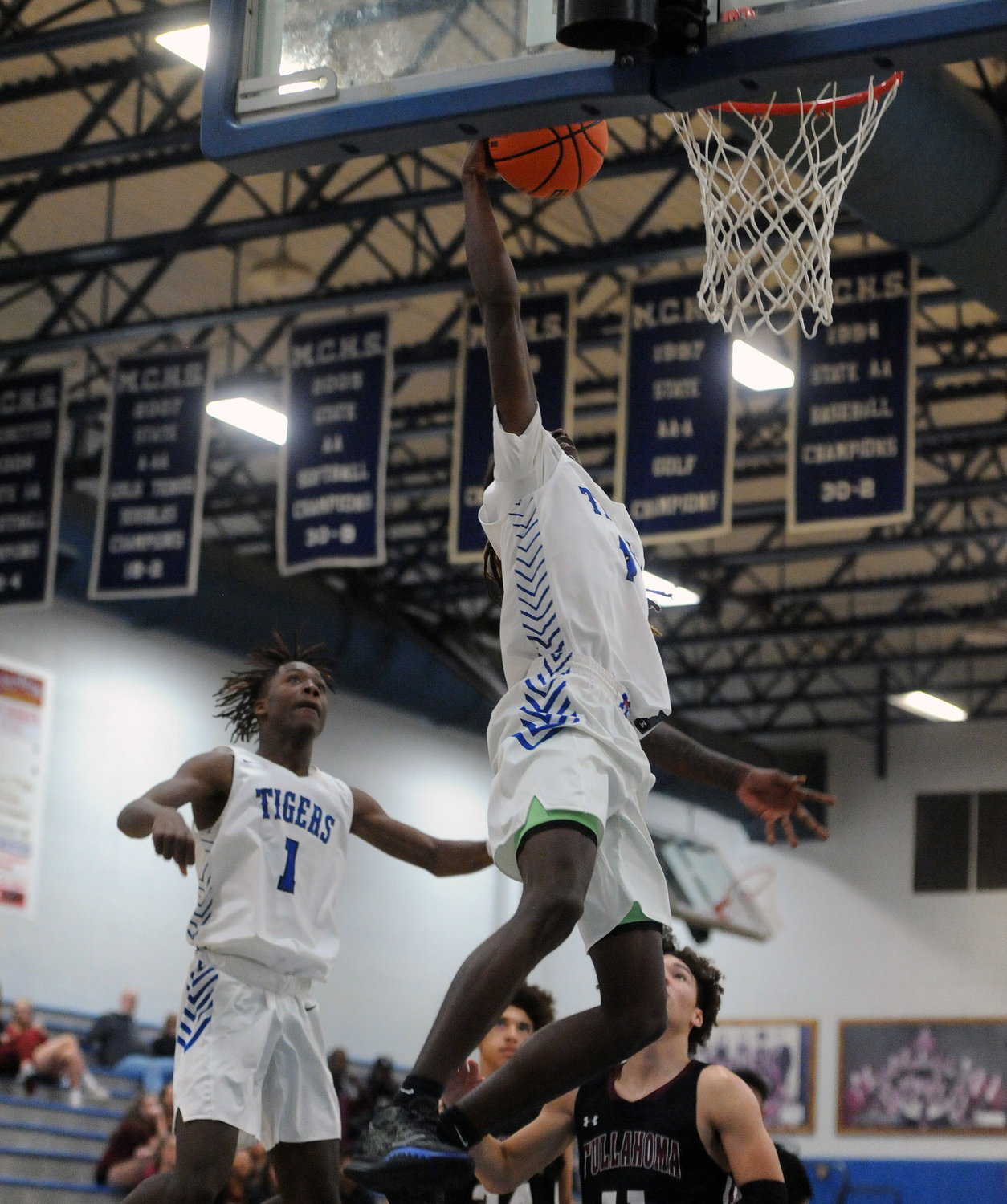 Devonte Davis throws down a massive dunk after picking the Wildcats’ pocket in the fourth quarter. He finished with 12 points.
Tribune Photo by Chris Siers 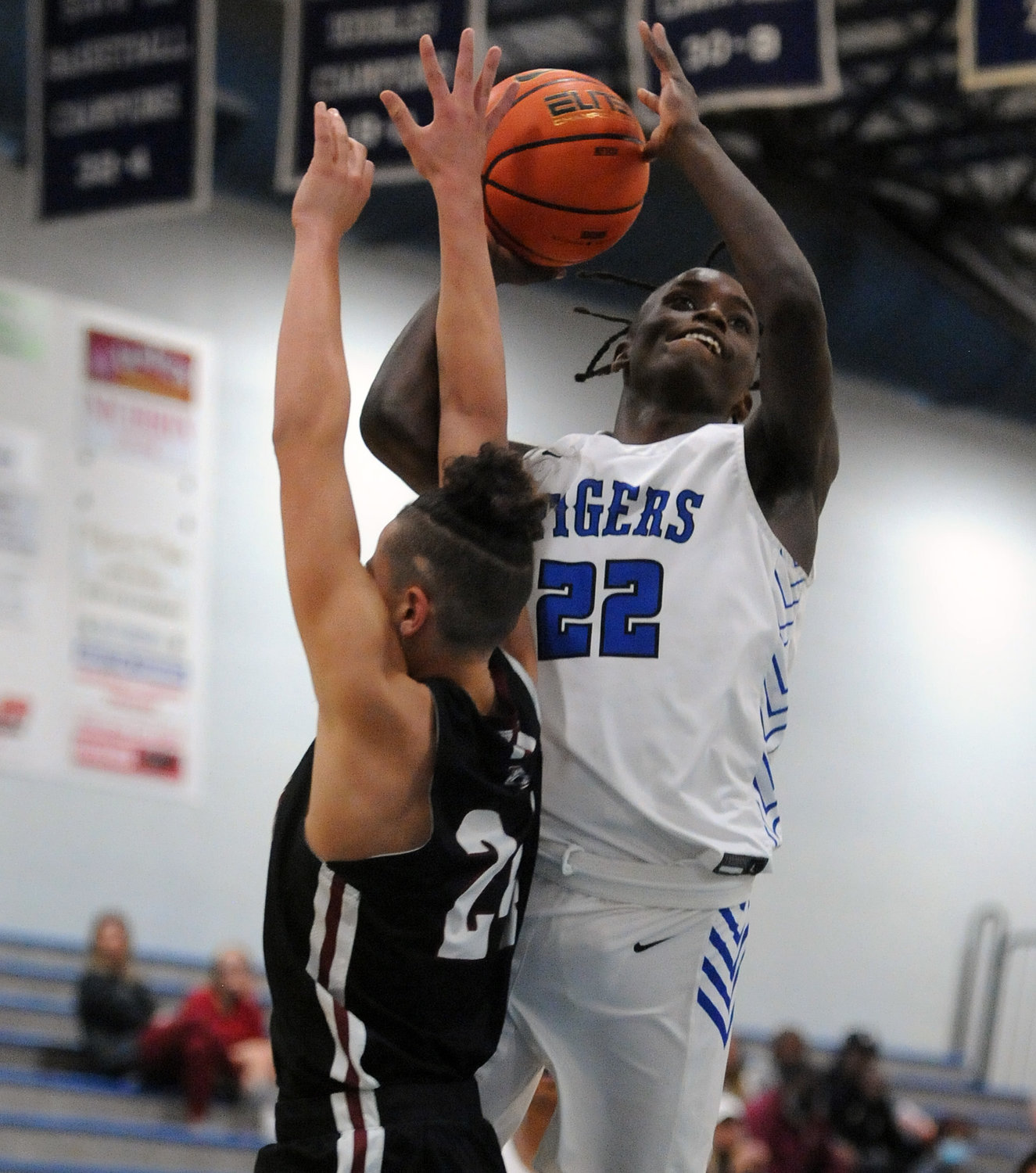 Ronnie Lyttle powers his way through the Wildcat defense and muscles his way free for a shot. He knocked down 13 points for Marshall County.
Tribune Photo by Chris Siers

Kintarius Morris finishes off a fast break with an easy basket for the Tigers.
Tribune Photo by Chris Siers
Previous Next
Posted Wednesday, February 2, 2022 1:55 pm
By Chris Siers ~ sports@t-g.com

LEWISBURG — Ronnie Lyttle gave the Marshall County Tigers a stellar first half effort while Devonte Davis and Aja Jones supplied the second-half fireworks in a 60-40 District 8-AAA win over Tullahoma on Tuesday night.
After battling to an 11-11 draw after the first quarter, the Tigers played through Lyttle in the paint and the Tiger big man rattled off eight of his 13 points in the second quarter to help Marshall County (10-12, 2-5) take a 27-21 lead into the half.
As part of the efforts by Lyttle in the first half, the Tigers broke the game open with a 10-2 that spanned nearly four minutes in the second quarter.
In total, the Tigers piled on 16 points in the second period, including eight by Lyttle.
While the first half was led by an inside attack by the Tigers, in the second half it was a run-and-gun style attack.
An amped up pressure defense allowed the Wildcats (6-13, 3-3) to score just five points in the third quarter, while on the flip side, it was Davis and Jones who powered the Tigers’ offense in the second half.
Davis and Jones spurred a 14-point third quarter by combining for nine points.
After building a 41-26 lead by the end of the third quarter, tempers flared early in the fourth quarter and despite a pair of technical fouls assessed against the Tigers, Marshall County kept its composure and answered with a 12-0 run through the middle of the quarter, highlighted by a thunderous dunk by Davis following a steal.
Working his way to the paint and able to draw several Wildcat fouls, Davis scored eight of his total 12 points in the fourth, including a 4-of-6 effort at the free throw line.
With the Wildcats offense sputtering through most of the second half, the Tigers were able to battle their way to the line and in the fourth quarter alone, connected on an efficient 7-of-10 attempts to help secure the win.
As a team, the Tigers made good on 11-of-18 attempts and placed four players in double figures.
Jones led all scorers with 17 points, including 11 in the second half.
Lyttle and Davis added 13 and 12, respectively, while point guard Jamahl Gentry chipped in 10 as well.
For the Wildcats, Krys Uselton was the only Wildcat to reach double figures with 14 points.
The win snapped a three-game skid for the Tigers and sets up a key rematch against Spring Hill on Friday night.
Just two weeks ago, the Tigers defeated Spring Hill in Lewisburg for their first District 8-AAA win of the season.
Marshall County will take aim at the season sweep over the Raiders on Friday night.