CHAPEL HILL — The Forrest Lady Rockets played with class and determination versus Whites Creek in Monday night’s Region 4-AA Tournament opener at the Field of Dreams in Chapel Hill, … 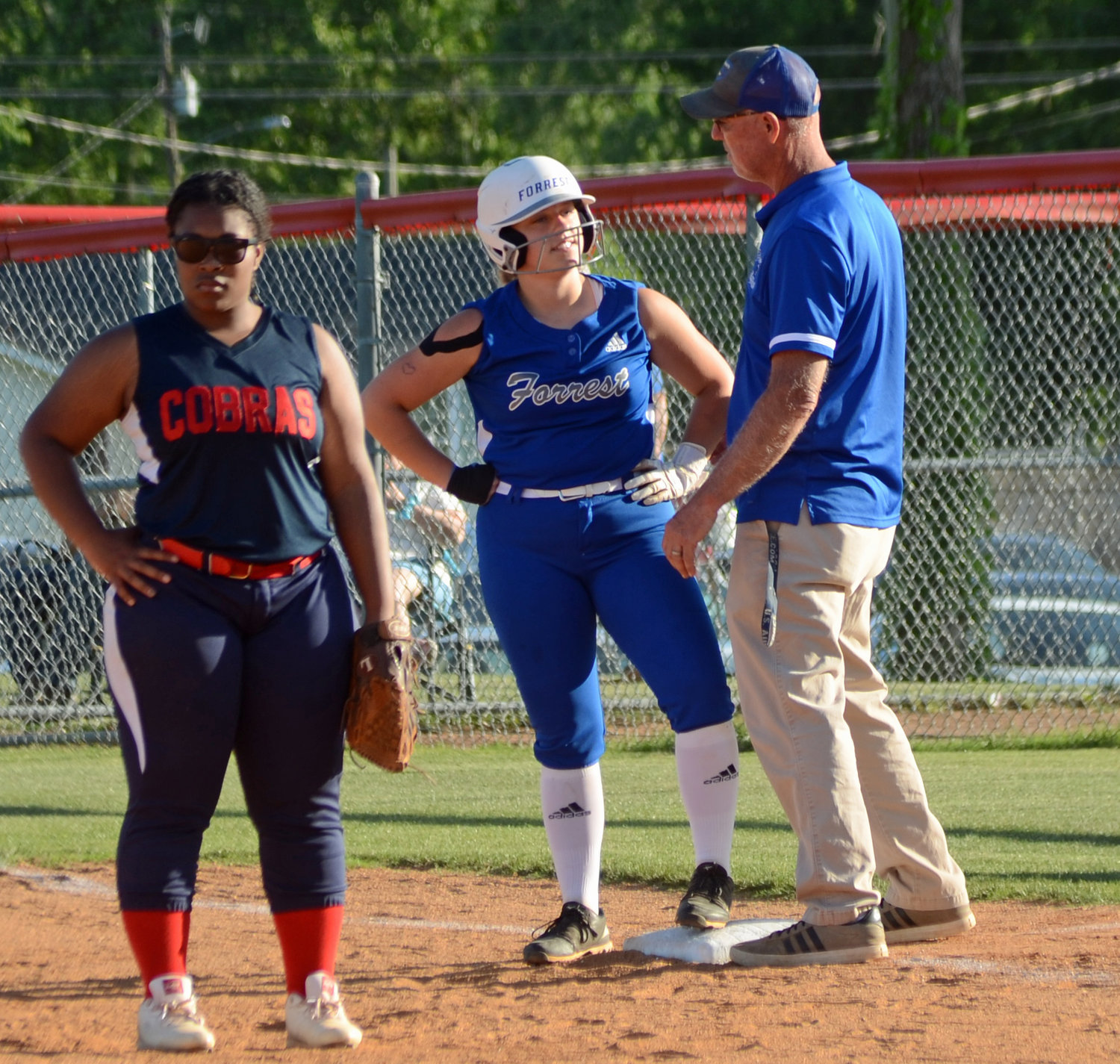 Leslie Bartoli talks with Forrest assistant coach Rickey Stinnett after reaching first base with a base on balls in the first inning.
Tribune Photo by Anthony S. Puca 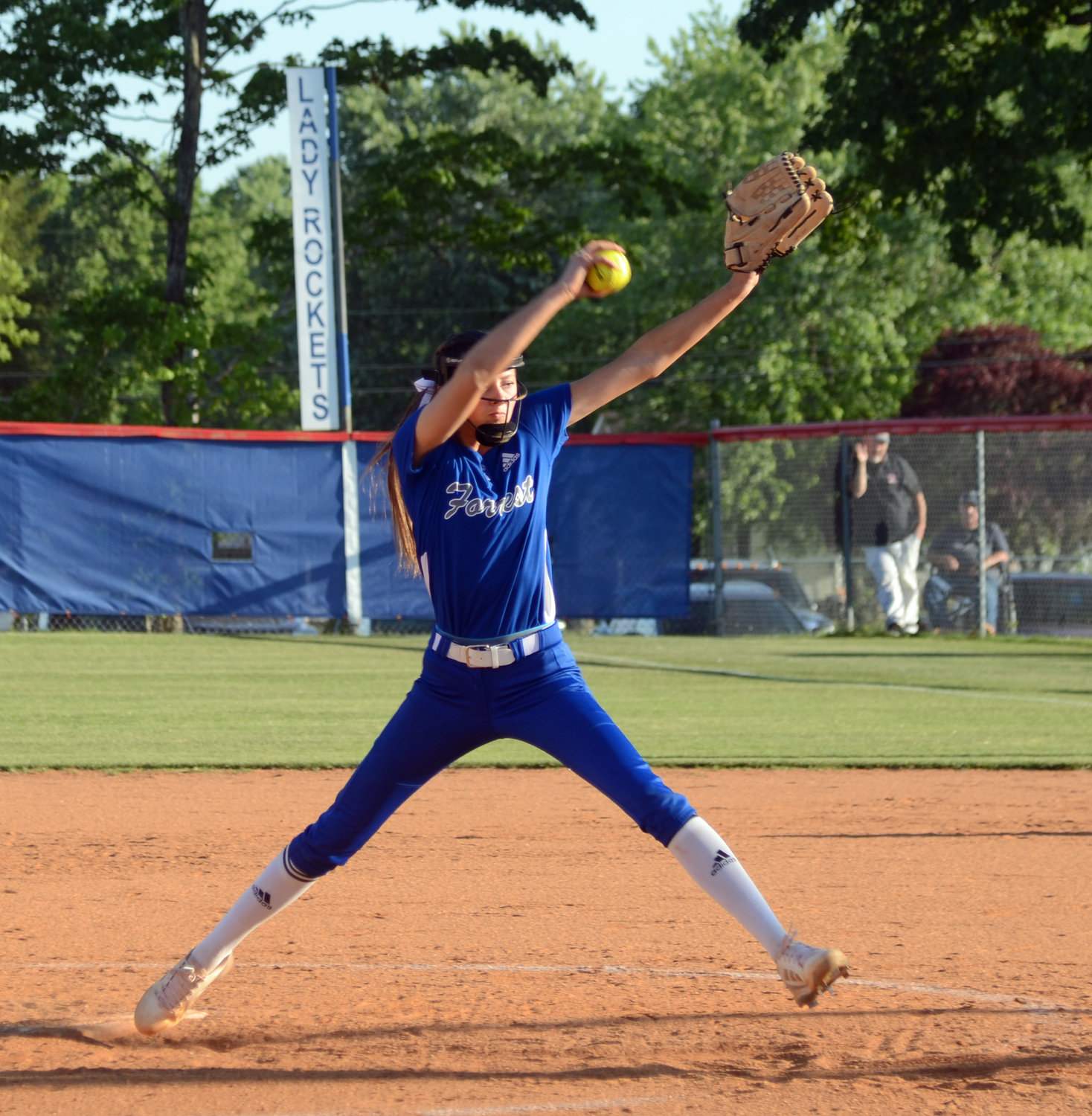 Ella Chilton picked up the win in the circle for Forrest, combining with Emory Hall for an all-freshman no-hitter versus Whites Creek in the opening round of the Region 4-AA Tournament at Chapel Hill Monday night.
Tribune Photo by Anthony S. Puca 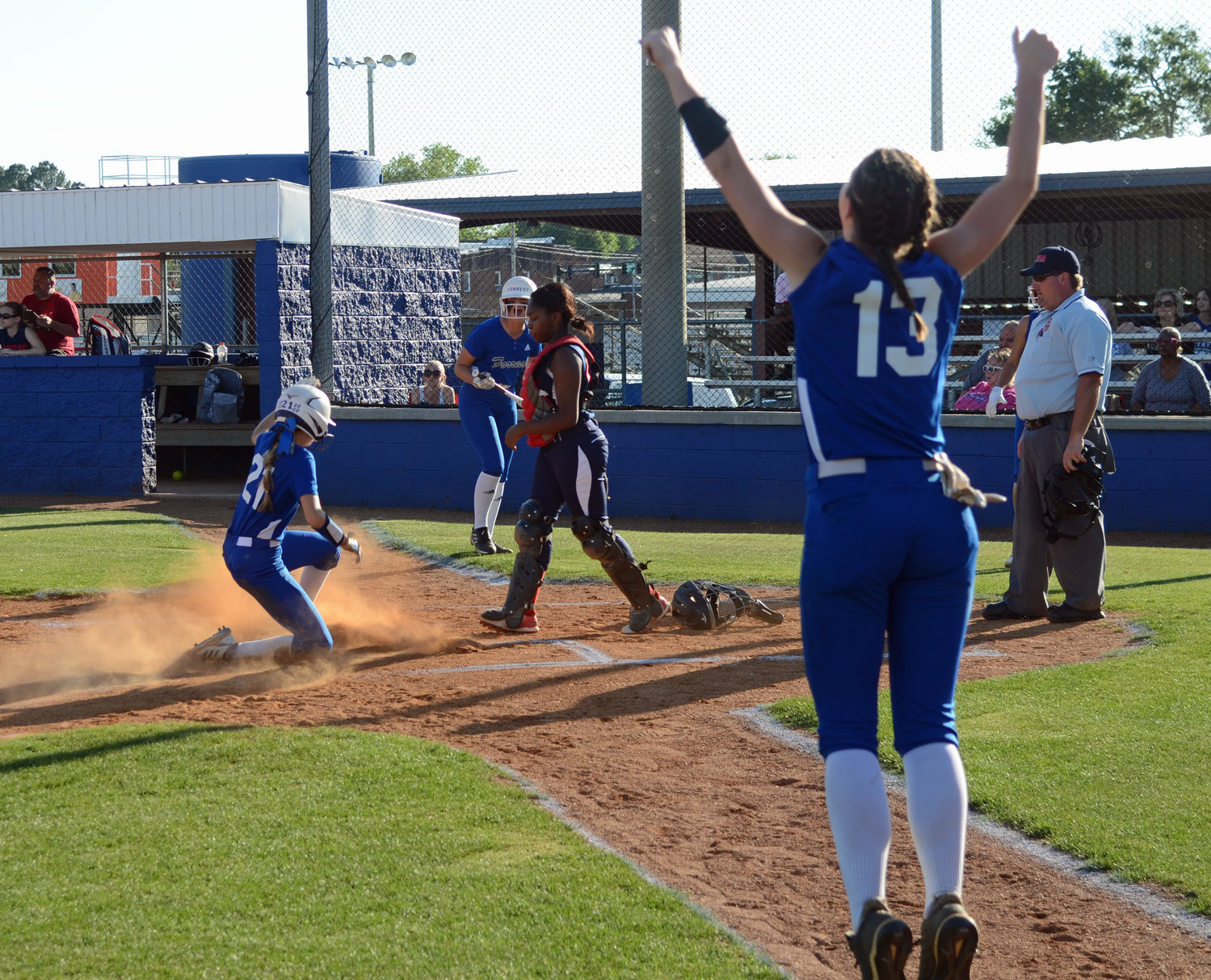 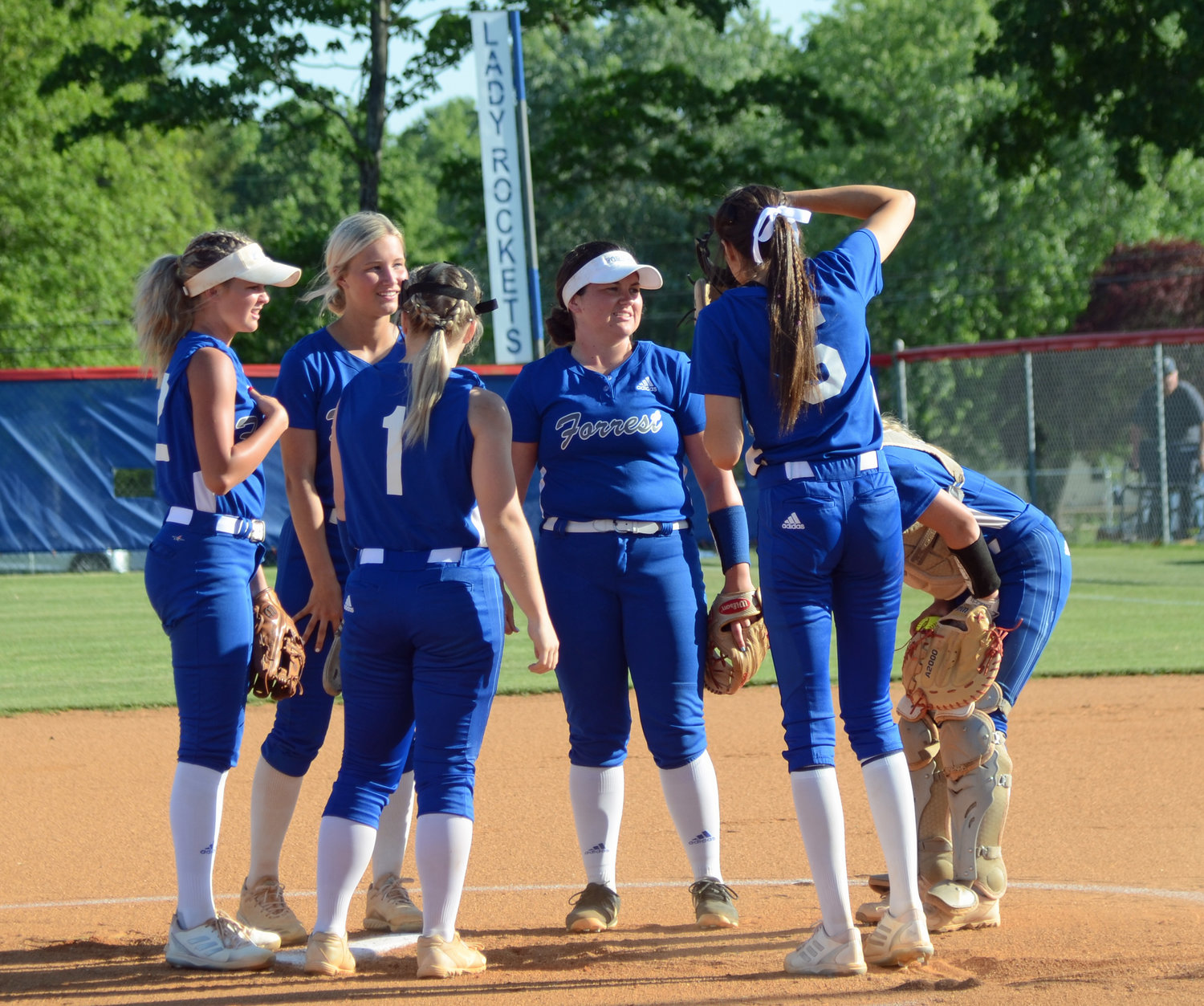 The Lady Rockets meet in the circle before the start of Monday night’s game.
Tribune Photo by Anthony S. Puca 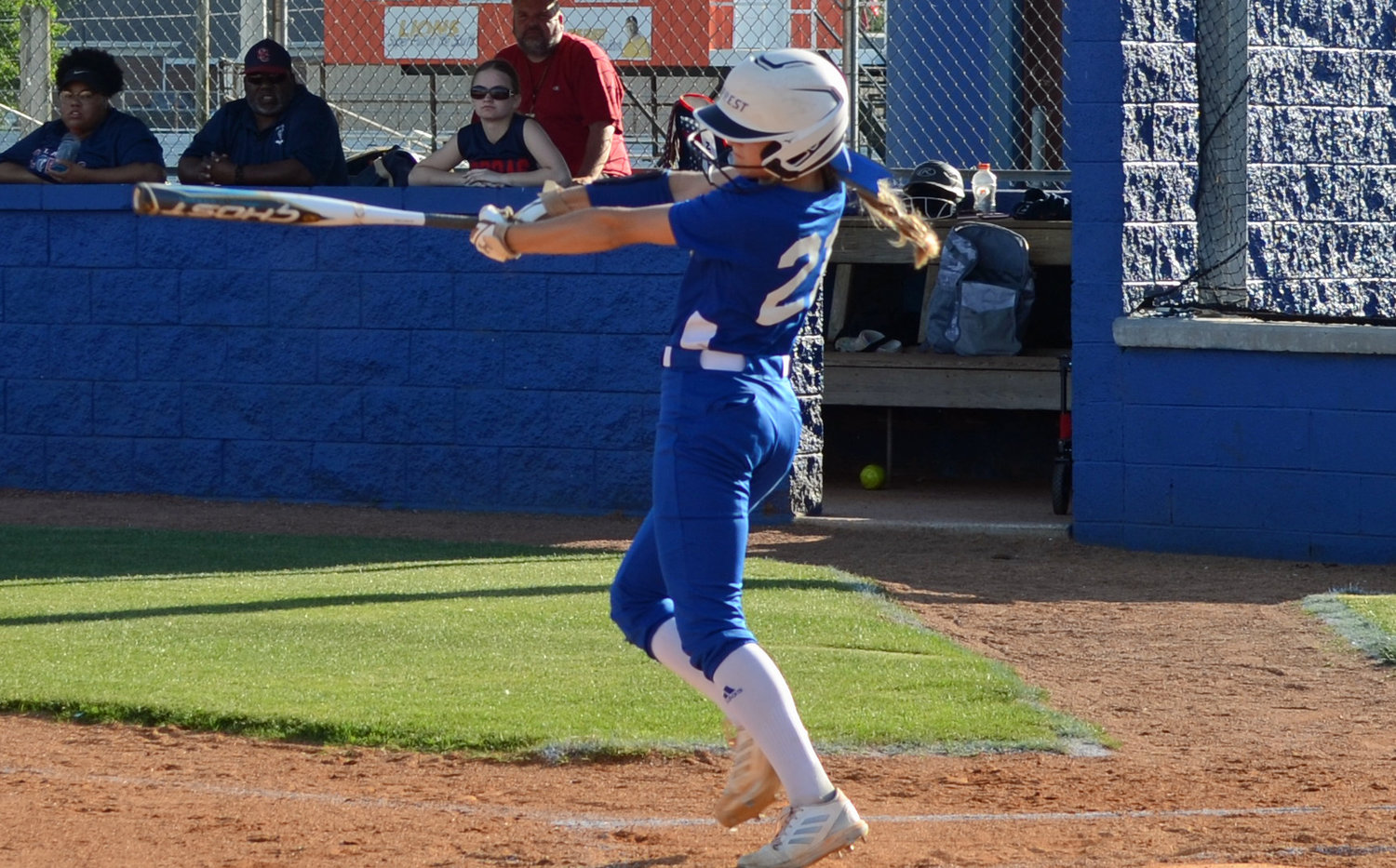 Maggie Daughrity slashes an inside the park home run in the bottom of the first inning.
Tribune Photo by Anthony S. Puca 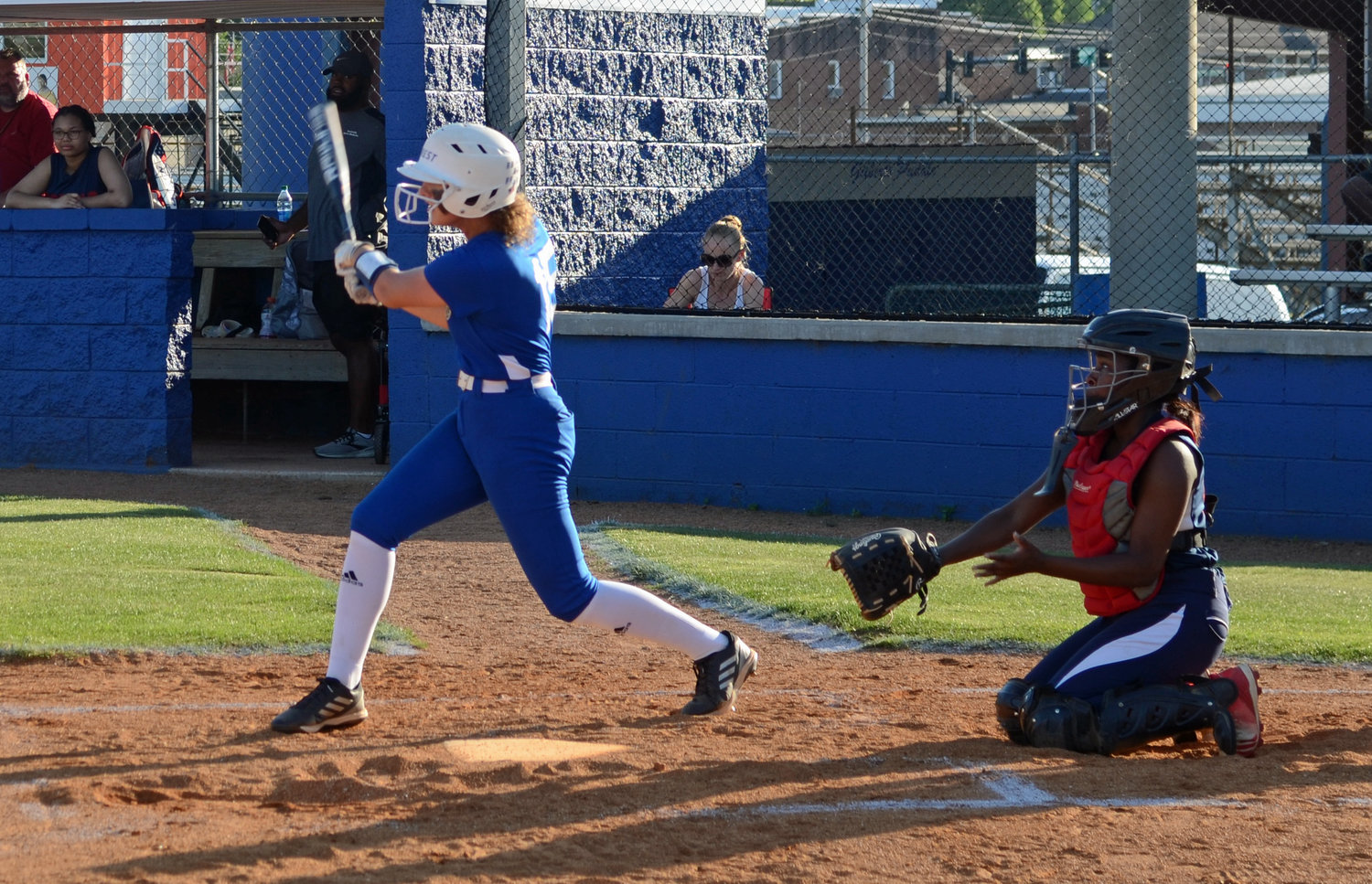 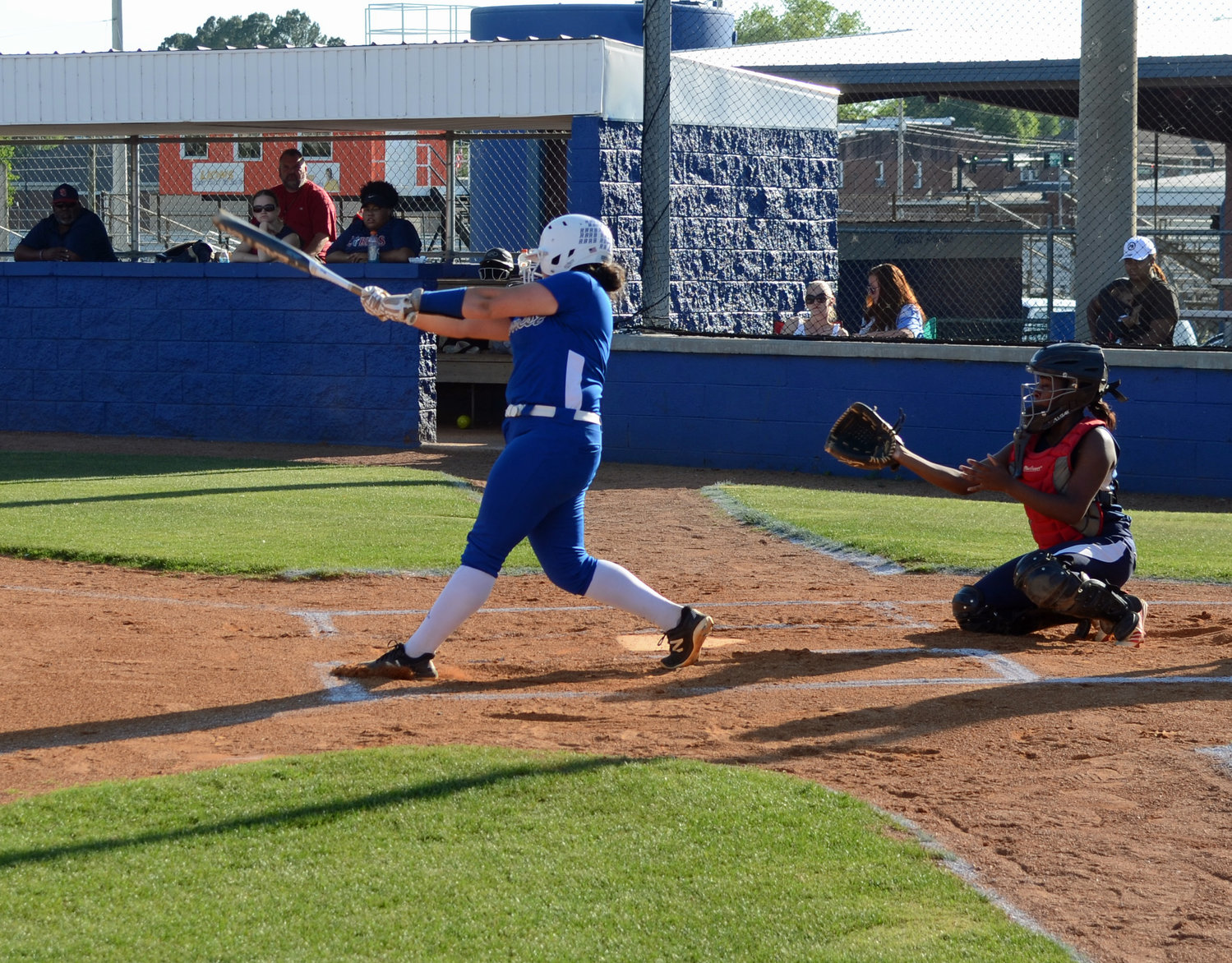 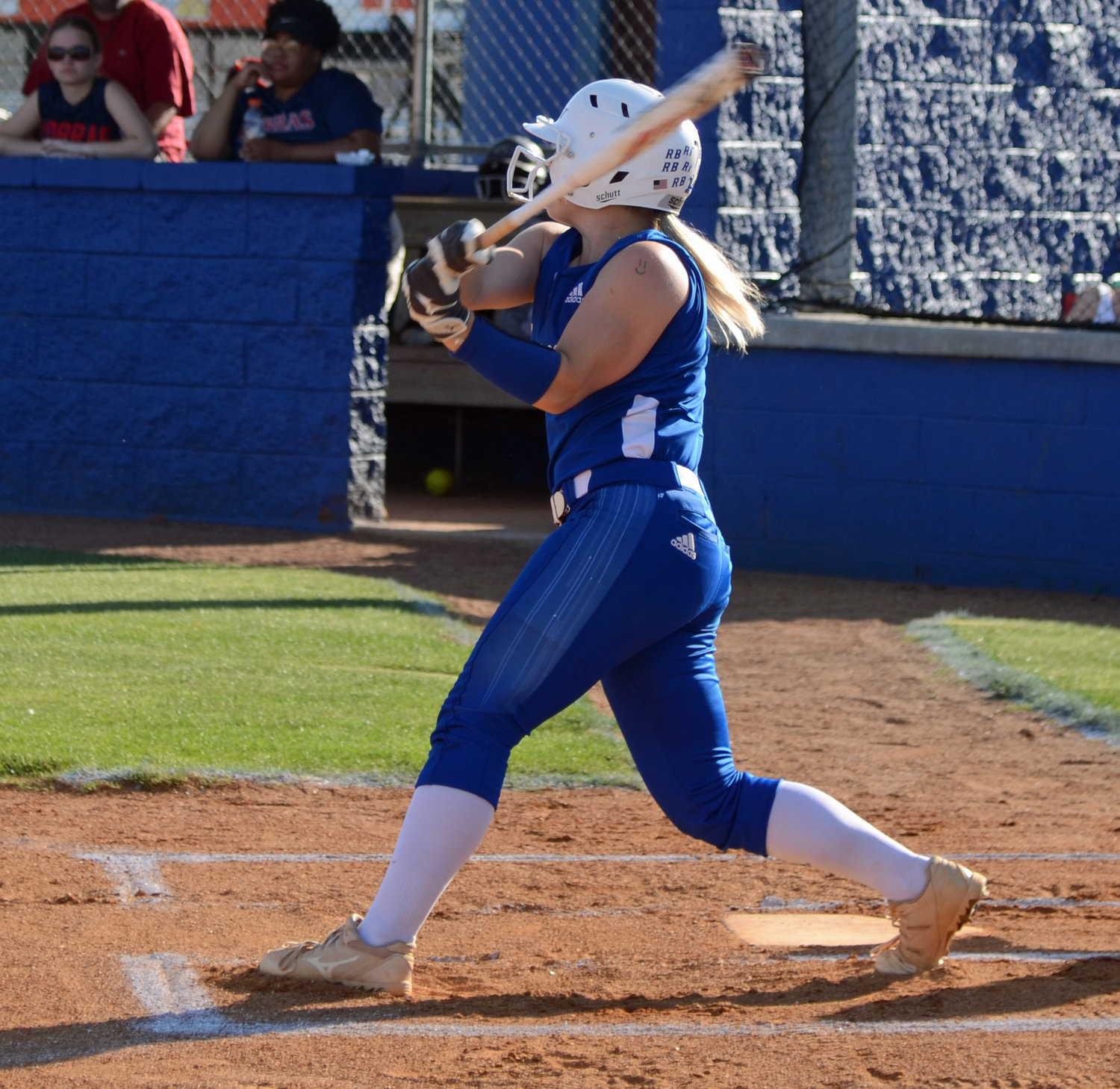 CHAPEL HILL — The Forrest Lady Rockets played with class and determination versus Whites Creek in Monday night’s Region 4-AA Tournament opener at the Field of Dreams in Chapel Hill, taking care of business in a 16-0 three-inning, run-rule win over the Lady Cobras.
It was great to see that everyone got to contribute tonight,” Forrest coach Shelby Lightfoot said. “Every single player on our bench got to play in a region game, all the way from our senior to our eighth-graders, so I was excited about that.”
Forrest scored nine runs in the first inning and seven in the second and could have had many, many more if they wanted to, but Lightfoot was not going to embarrass her opponent.
On a few occasions, Lightfoot instructed her base runners to leave early off the base to be called out to end both Forrest at bats.
Ella Chilton and Emory Hall combined for a perfect game in the circle for Forrest as they struck out all nine Whites Creek batters that came to the plate.
Chilton pitched the first two innings and struck out six and Hall pitched the third inning and whiffed all three Lady Cobra batters she faced.
Fourteen Lady Rockets batted in the bottom of the first inning with the big moment coming on an inside the park home run by Maggie Daughrity, who laced a line drive in to the right/center field gap and circled the bases to make it 6-0.
Christa Warren had a pair of RBI hits in the inning with a triple and double and scored twice while Macyn Kirby and Abby Ferguson walked twice and scored both times and Addison Bunty (SAC FLY) and Leslie Bartoli (FC) both drove in one run apiece
Carli Warner also had an RBI triple and a base on balls in the frame.
Lightfoot sent up all pinch hitters in the bottom of the second inning as the Lady Rockets sent 10 batters to the plate in the seven-run stanza.
Haddie Patton had two hits, two RBIs, and two runs scored in the inning and Haylee Webb, Hall, Ella Chilton, and Miranda Stout all drove home one run.
With the win, Forrest (24-10) advances to the region tournament final and hosts a very familiar foe in the Community Viqueens (24-10), who traveled to Nashville and pasted East Nashville 31-0.
“They have been tough games been big battles,” Lightfoot said. “I just hope we can come in and play better defense, I feel like we have let a few runs in by not playing sound ball and letting the pressure get to us, so tomorrow we will gets ready with our bats and give them a better game.”
Forrest has won 51 straight games over Community, dating back to 2002, but the last two contests have been close as Forrest has had to come back to win both times.
The winner of Wednesday night’s contest will host a state sectional game on Friday while the loser goes on the road.
“Wednesday night’s game is important just because getting a home game versus playing on the road and getting that momentum, plus playing a one seed versus a two seed,” Lightfoot said. “So tomorrow’s game, even though you make it, that game may be the most crucial game in the whole tournament just to get to sub-state.”