When the 45th Annual Lions Club Super Pull of the South kicks off next Friday night at Chapel Hill there will be the untamed excitement for its return after last year’s cancellation due to the Covid-19 pandemic.

“Our community has suffered financially not having a tractor pull last year due to Covid because all the things the Lions Club gives to including the non-profits, our community, associations, and all the other groups,” Lions Club president Ricky “Goose” Sweeney said. “It certainly took a toll.”

There was also be some very empty holes in the hearts of the fans after the loss of two giants of the sport. 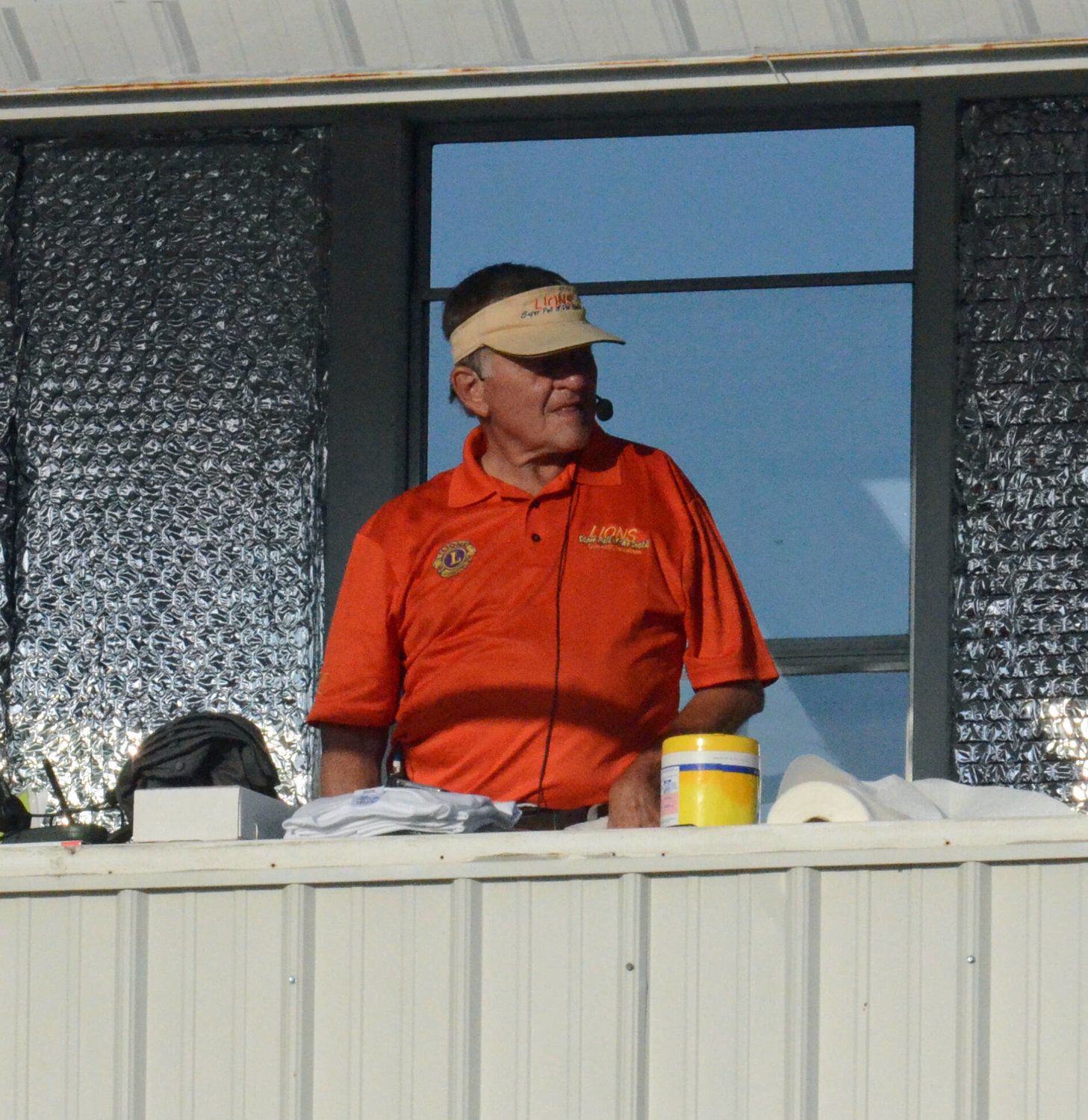 The Chapel Hill and Super Pull community lost a legend in January when Lions Super Pull of the South chairman and announcer Chris Gilbert passed away.
Tribune photos by Anthony S. Puca 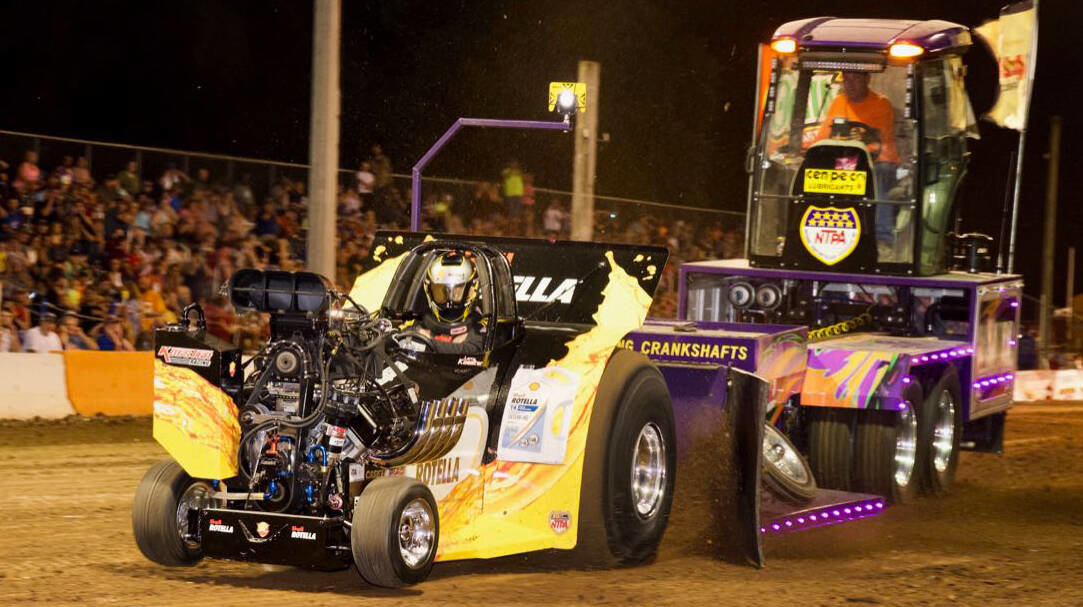 NTPA legend Larry Koester guides his “Footloose” machine down the track at the Lions Club Motor Sports Park for his final run of his 32-year career during Friday night’s session of the 2019 Super Pull of the South in Chapel Hill. 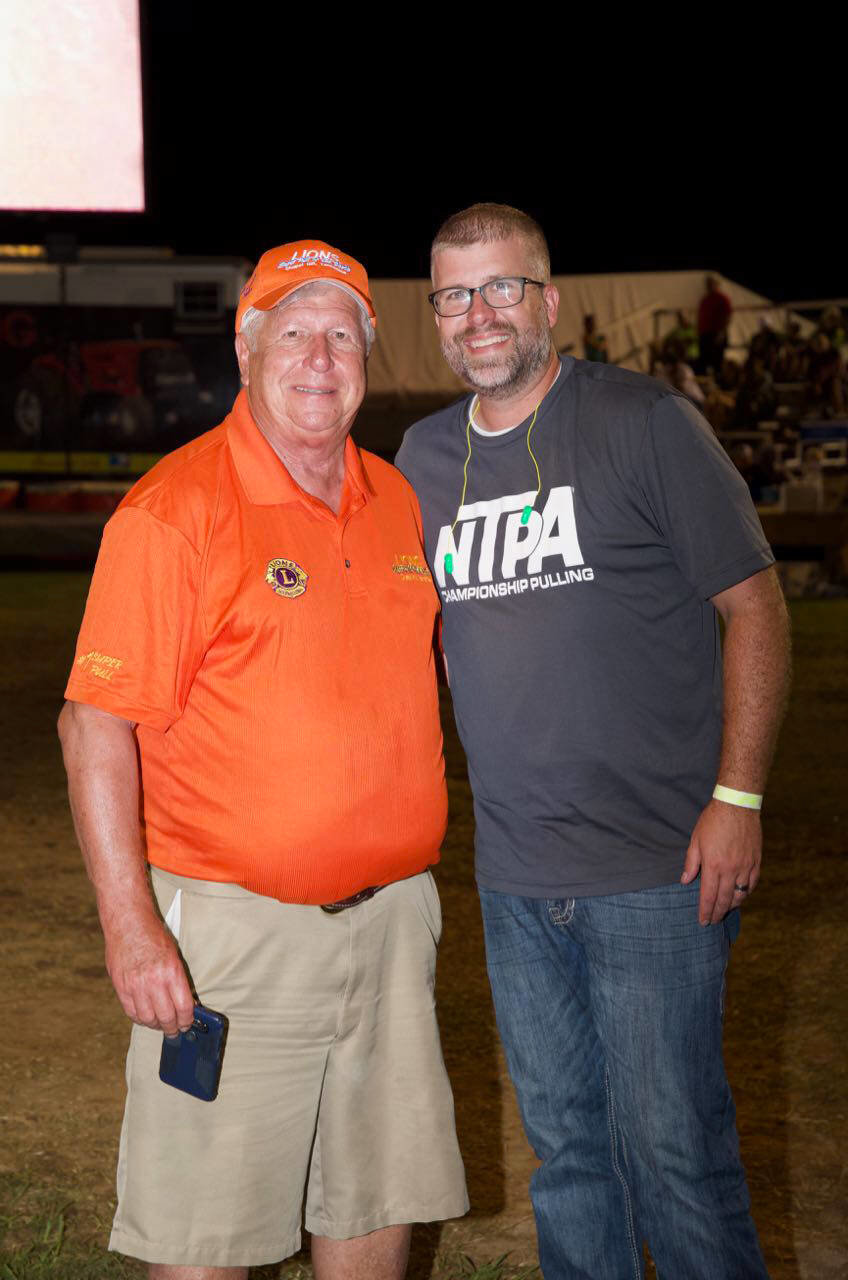 Longtime on-track announcers Butch (left) and Miles Krieger, along with brother Jeremy (not pictured) will take over the announcing duties for this year’s Super Pull of the South. 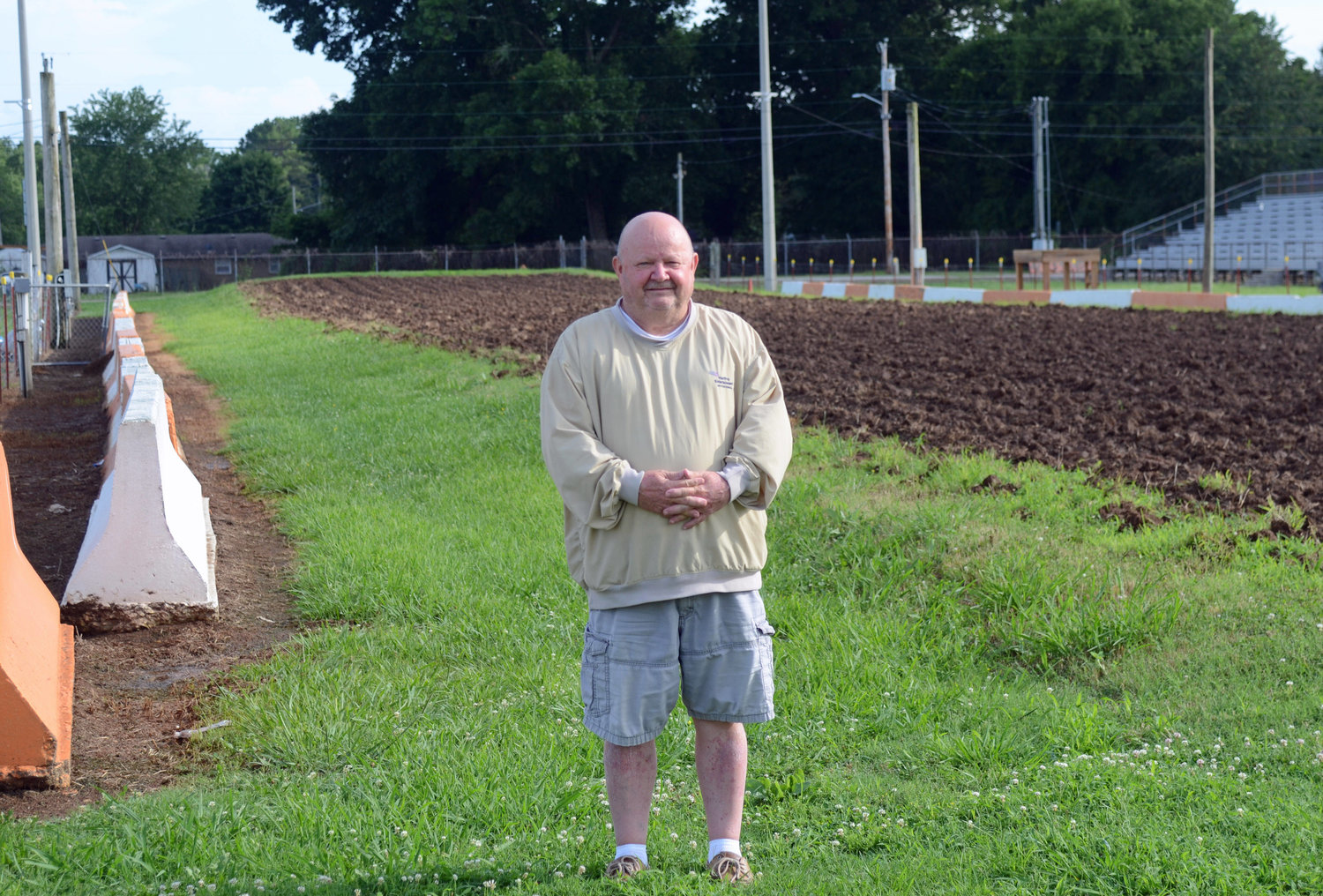 Lions Club president Ricky “Goose” Sweeney stands in front of the freshly turned over track surface at the Lions Club Motorsports Park that is always carefully manicured and readied for racing by Ken Lamb and his grounds crew. 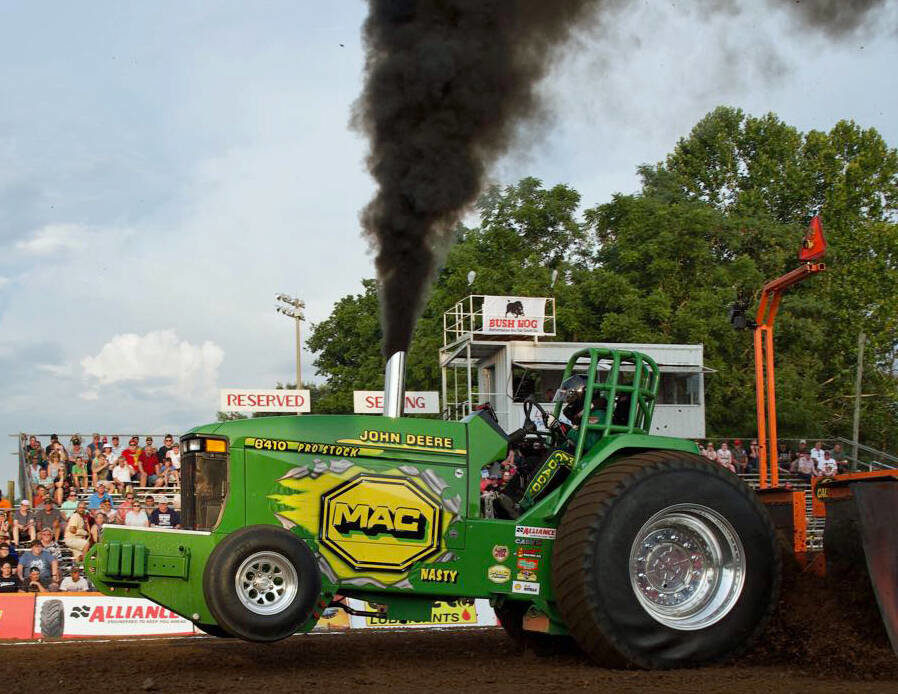 When the 45th Annual Lions Club Super Pull of the South kicks off next Friday night at Chapel Hill there will be the untamed excitement for its return after last year’s cancellation due to the Covid-19 pandemic.

“Our community has suffered financially not having a tractor pull last year due to Covid because all the things the Lions Club gives to including the non-profits, our community, associations, and all the other groups,” Lions Club president Ricky “Goose” Sweeney said. “It certainly took a toll.”

There was also be some very empty holes in the hearts of the fans after the loss of two giants of the sport.

The racing world mourned the sudden passing of a legend who inspired countless numbers of fans throughout the country who marveled at his determination and spirit.

“I didn’t know him personally, but he was a great gentleman and great sportsman as well.”

Koester was severely burned and lost his legs in a mowing accident at his Indiana home in 1986, but with pure grit, Koester began his pulling career in 1987 and eventually rose to the top of the sport when he captured Grand National championships in 2001, 2006, and 2008 in his Modified Mini “Footloose” machine.

His two children Ashley (Corzine) and son Adam both followed their father into the sport and have had stellar careers in their own right and have been longtime fixtures in Chapel Hill.

On January 5, 2021 another legend was lost when Chris Gilbert, the face and voice of the Super Pull of the South passed away.

Gilbert was a 48-year member of the Lions Club, the chairman of the Super Pull, and the renowned announcer for all 44 events in Chapel Hill.

His dedication to the Super Pull and the Chapel Hill community was unmatched and he will be sorely missed.

“All you have to say is Chris, you don’t even have to say his last name,” Sweeney said. “Chris Gilbert is going to be missed for many, many years for a long time to come because of all his contributions to the community, especially the schools and all the other things he did people don’t even know about.”

There was no public service in January due to Covid, but on Saturday, July 24 there will be a celebration of life for Gilbert at the Super Pull track beginning at 10 a.m.

“Everyone is welcome, please come out and be part of that and find out all the things that Chris did because he did a lot,” Sweeney said.

You do not have to have a ticket to the tractor pull to attend the celebration.

Not many people outside the Super Pull world actually know the extent of Gilbert’s contribution to the event that was his 365 day passion as he travelled across the country as the ambassador, securing sponsorships for the event and assembling pullers from all over the country to come to Chapel Hill for over four decades.

“You can’t have a tractor pull without the pullers and Chris had a great rapport with every one of them,” Sweeney said.

The Lions Club Super Pull has grown in to one of the premier events on the NTPA circuit and for a couple of weeks in July, the entire community pitches in to welcome the pullers and their fans from all over country.

“This community is so good at helping,” Sweeney said. “At one time we had over 100 members in our Lions Club and now we are down to about 75, 80 maybe, but when the tractor pull comes it’s like we have 500.”

“We could use some more members, so if folks could contact us after the pull, I would love to talk to you about joining the Lions Club.”

With just the one session in 2019 and missing both last year, the Lions Club is expecting big crowds for both nights that will feature the Diesel Super Stock Tractors, Pro Stock Tractors, 4-Wheel Drive Trucks, Unlimited (multi-engine) Tractors, and the Mini-Rod Classes that will chase over $100,000 in prize money.

“We have been calling all the people who have had reserved seats in the past and they are all coming, we have been cooped up too long they are saying,” Sweeney said. “With all the people I’ve been talking to, the indication is people are tired of staying home, they are ready for something to do.”

“Several of us have been going every day for the last couple of months to nail this thing down and here it is less than two weeks away now and it is coming together pretty good, we are just hoping for no rain.”

There will be no coolers or backpacks allowed, no outside food or drinks, and beer sales will continue to be onsite.

Proceeds from the event support help fund sight projects across Middle Tennessee through the Lions Eyebank and Sight Service at the Monroe Carrell, Jr. Children’s Hospital at Vanderbilt, the Chapel Hill Volunteer Fire Department and ambulance station, the Senior Citizens Center, local youth projects such as Boy Scouts, Girl Scouts, 4-H projects, the local schools and library, and all the sporting activities at Forrest.

More information on ticket purchases can be found at www.lionssuperpull.com or by calling 931-364-2236.