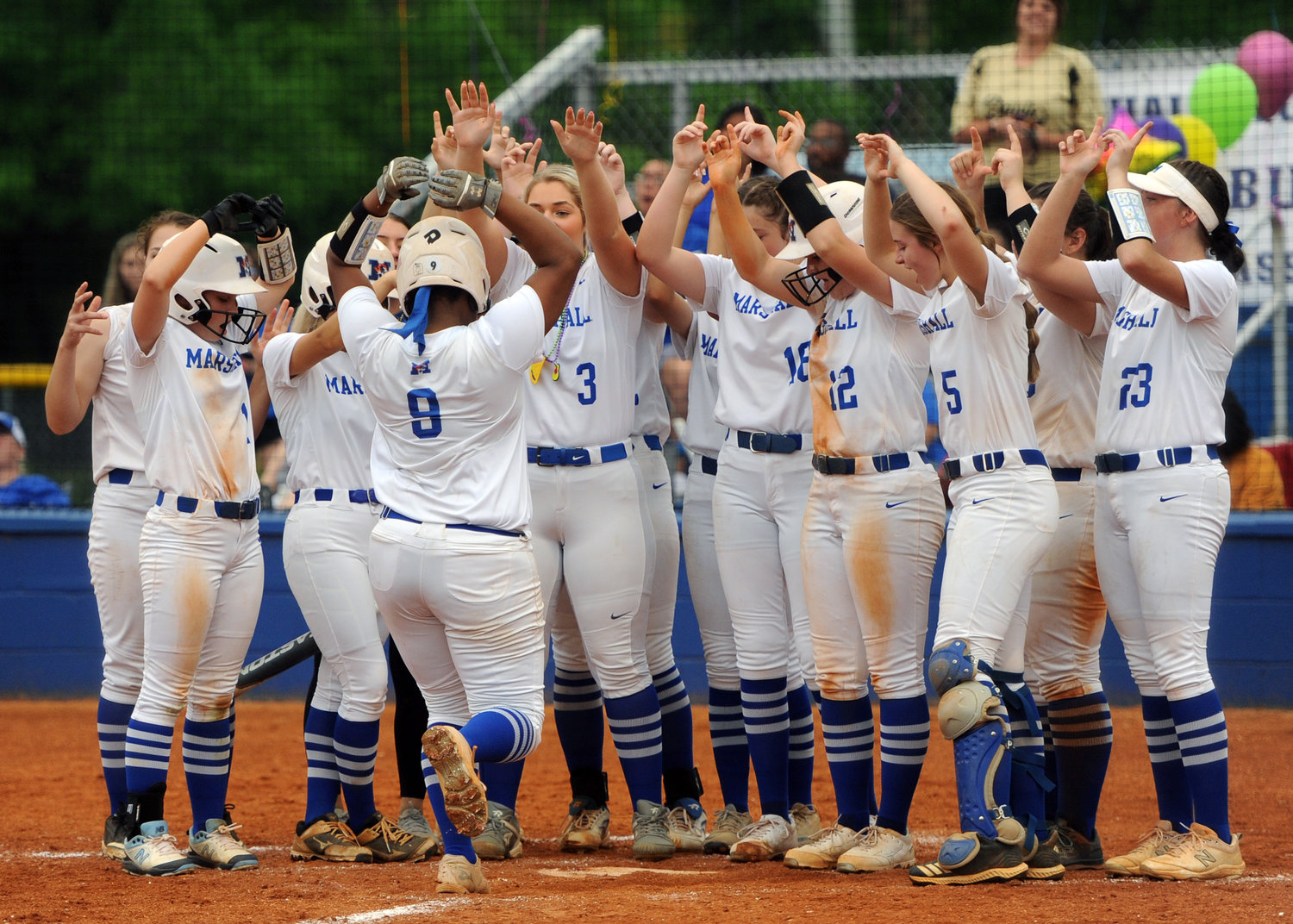 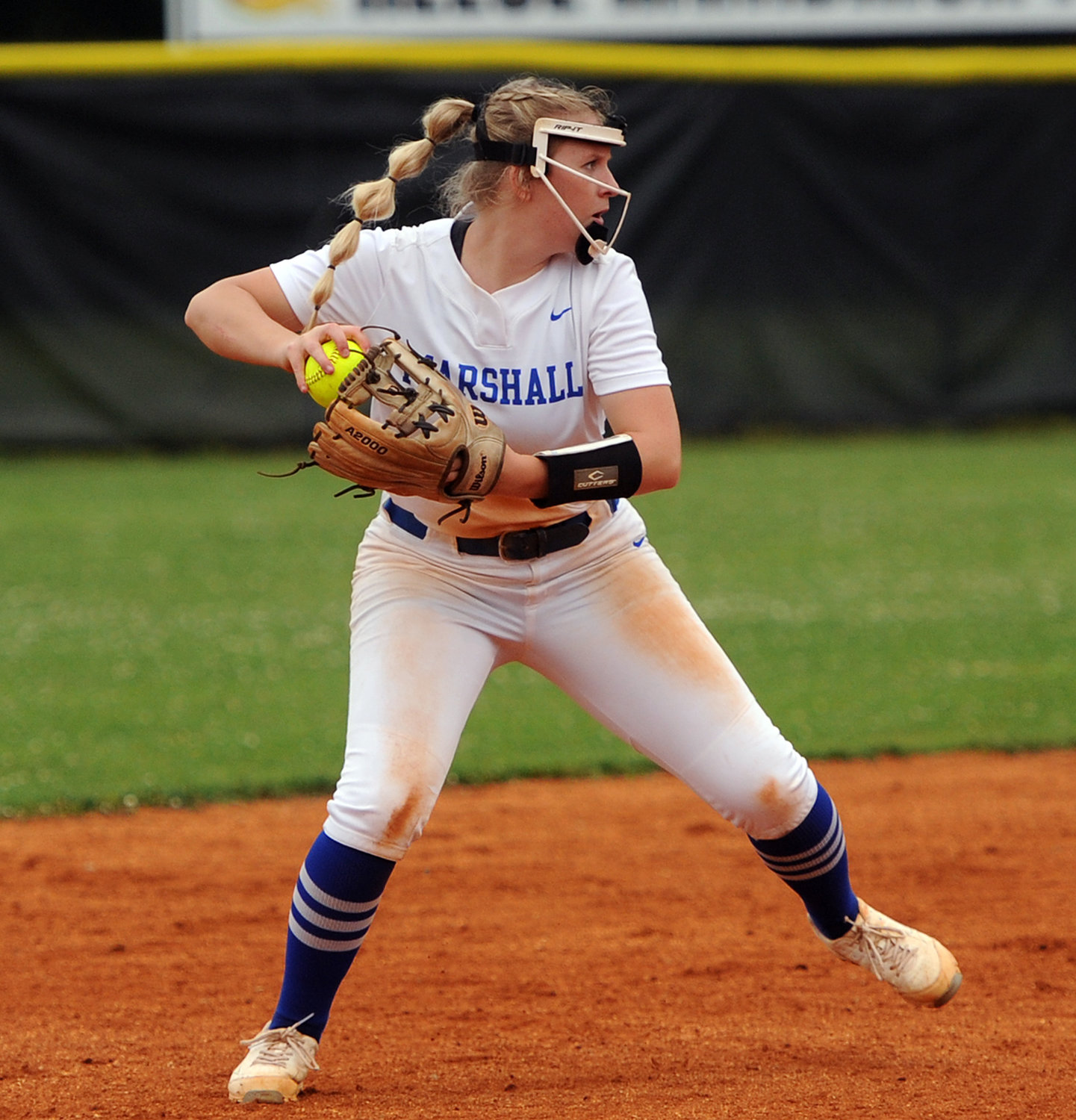 Short stop Ellie Luce takes aim to fire a throw at first for the out.
Tribune Photo by Chris Siers 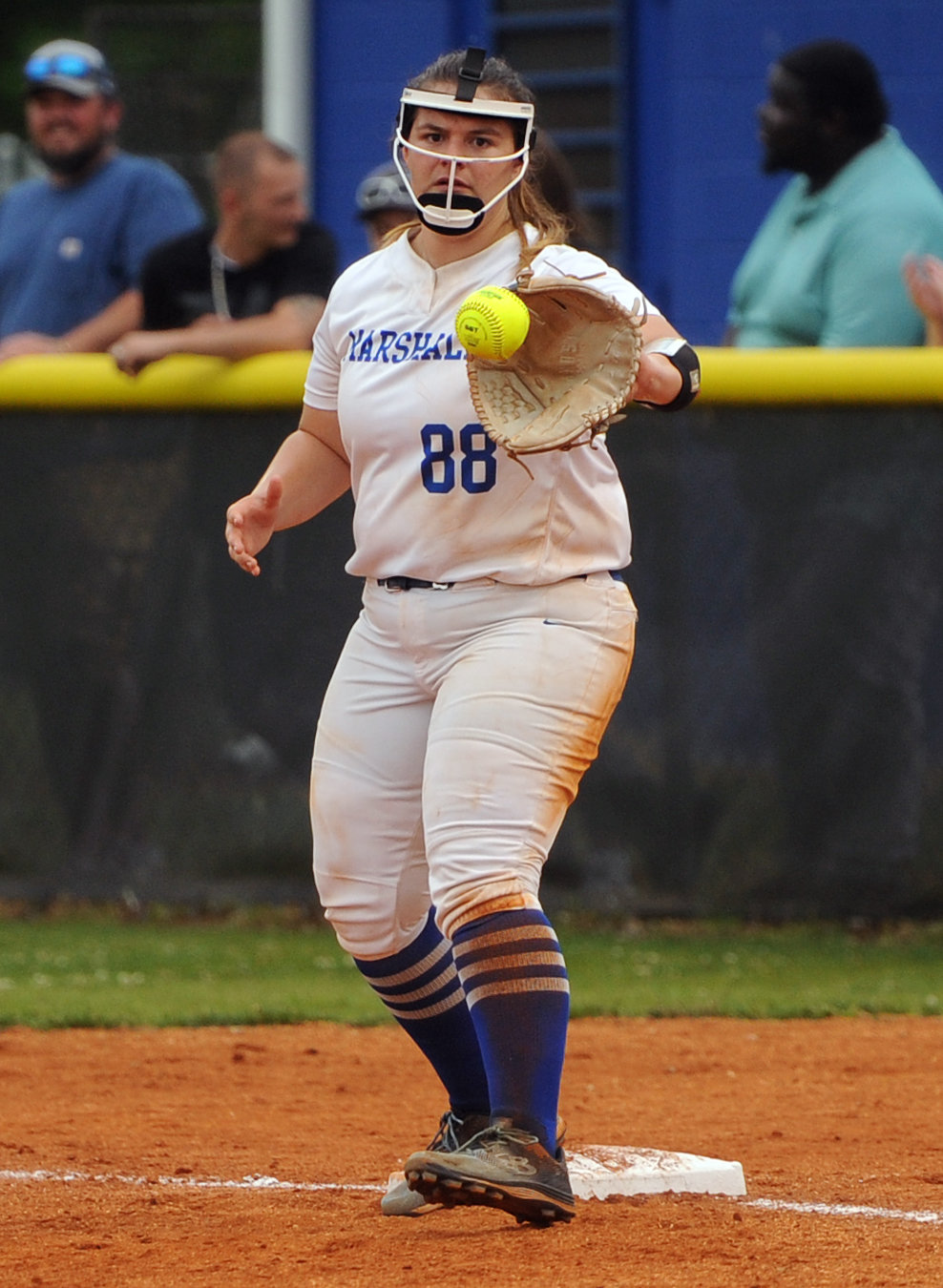 First baseman Jahna Meadows-Richardson puts the squeeze on a throw for the out.
Tribune Photo by Chris Siers 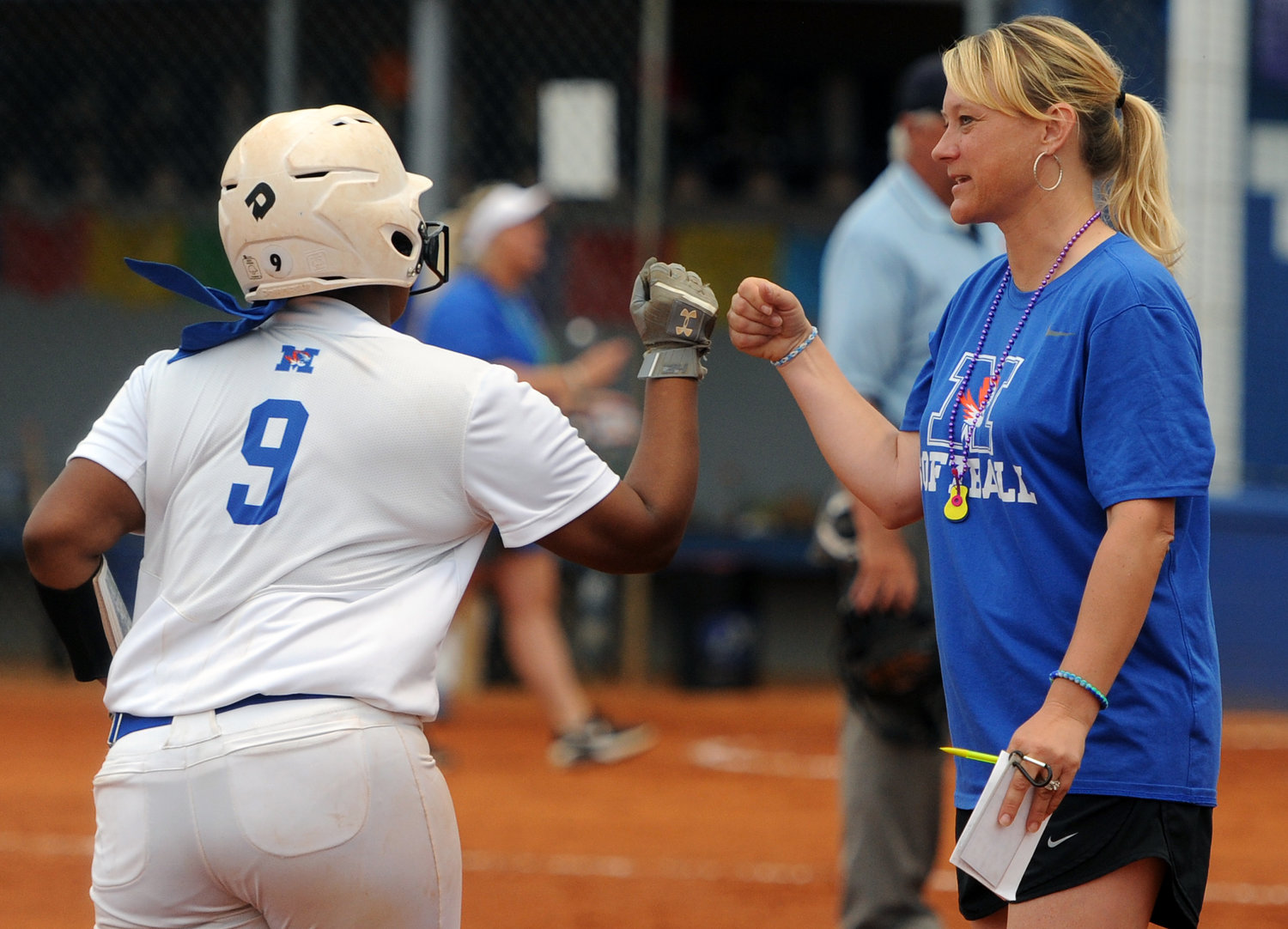 I think we can do some awesome things this year. We are looking at it as trying to take one game at a time. I think if we do that and stay focused, we’re going to be alright.”
Tigerette coach Amy Bonner
By Chris Siers ~ sports@t-g.com

LEWISBURG — There’s been a winning recipe Marshall County has pieced together over the last several weeks of the regular season that allowed the Tigerettes to build a 10-game win-streak by the regular season finale.
On Thursday, the Tigerettes made it 11-straight with a dominant, 13-0 victory over the Spring Hill Lady Raiders in the opening round of the District 8-AAA tournament.
For coach Amy Bonner, it’s been just a matter of time for her coaching staff to learn the team and vice versa and the results have been nothing short of excellent during the win-streak.
“We had three new coaches and we kind of had to get to know each other a little bit and get to know how everybody plays. We’re starting to gel, we’re starting to trust and we’re starting to rely on each other. That’s a big deal for us. Just getting that momentum under our feet a little bit has been really positive for us,” she said.
The Tigerettes did it all against Spring Hill and had their way with the Lady Raiders, both at the plate and in the field.
Led by Haylee Hobby, who once again toed the rubber and pitched a shutout, the Tigerettes limited the Lady Raiders to just three hits.
Spring Hill’s biggest scoring chance came in the second inning when the Lady Raiders connected on a pair of back-to-back two out hits that put runners on second and third.
The Tigerette defense responded with a ground out to first to end the threat.
Spring Hill never threatened again.
At the plate, the Tigerettes got quality production up and down the lineup, but it was Kaniyah Taylor who had the hot stick on Thursday.
She went 3-for-3 with two home runs and four RBIs.
Mallory Woodward also had a stellar night at the dish, going 3-for-4 with three RBIs.
In total, the Tigerettes hammered the Spring Hill pitching staff to the tune of 17 hits.
Woodward drove in the first runs of the night on a two RBI bloop single to right and Taylor followed with a RBI double to give the Tigerettes a 3-0 lead in the first.
Jessa Lancaster padded the Marshall County lead with a RBI double in the second before the Tigerettes blew the game wide open with a six-run third inning.
In that six-run third, high-lighted by Taylor’s two-run shot, Marshall County saw Ellie Luce connect on a RBI groundball single to left and another RBI double by Demiyah Blackman.
By the end of the third, the Tigerettes led 10-0.
Taylor led off the three-run fourth inning with a solo homer and Marshall County got two final runs from bases-loaded RBI singles by Jahna Meadows-Richardson and Woodward.
While the Tigerettes have gotten production from the top of the lineup to the bottom, Thursday night was Taylor’s night to shine.
“She (Taylor) is peaking at the right time. She’s been awesome. She’s coming on strong for us,” Bonner said.
As dominant as the Tigerettes were at the plate, Hobby proved equally as dominant from the pitcher’s circle on Thursday night as well.
She pitched all five innings for Marshall County and allowed just three hits while striking out four.
“Both of our pitchers—our pitching is strong. They’re moving the ball and placing the ball well. We can compete with anyone out there,” Bonner said.
While Thursday night marked the 11th-straight for the Tigerettes, it’s the first step in what Bonner hopes is a lengthy postseason run.
“I think we can do some awesome things this year. We are looking at it as trying to take one game at a time. I think if we do that and stay focused, we’re going to be alright,” she said.
The Tigerettes continue in the District 8-AAA tournament on Friday night at Lawrence County.