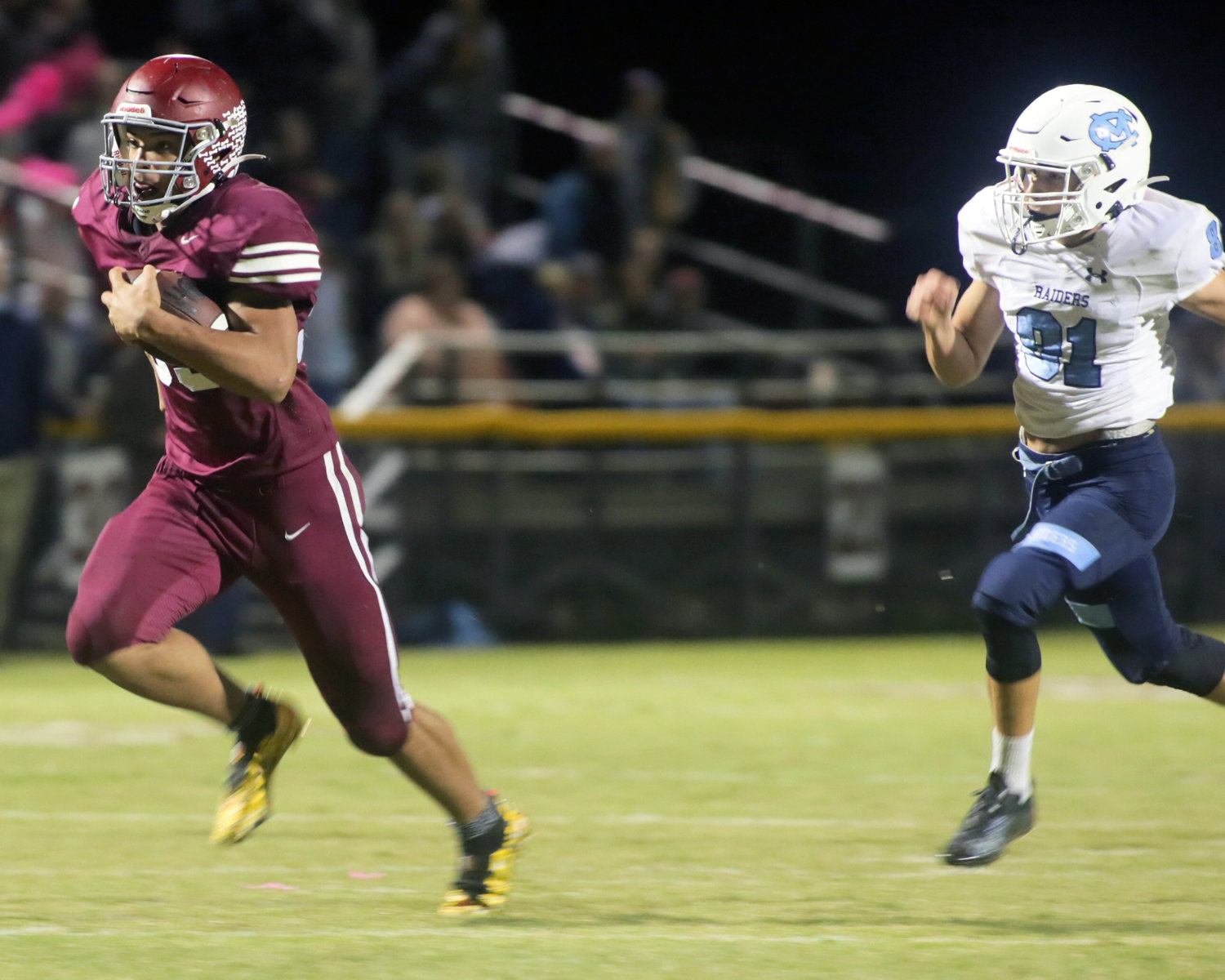 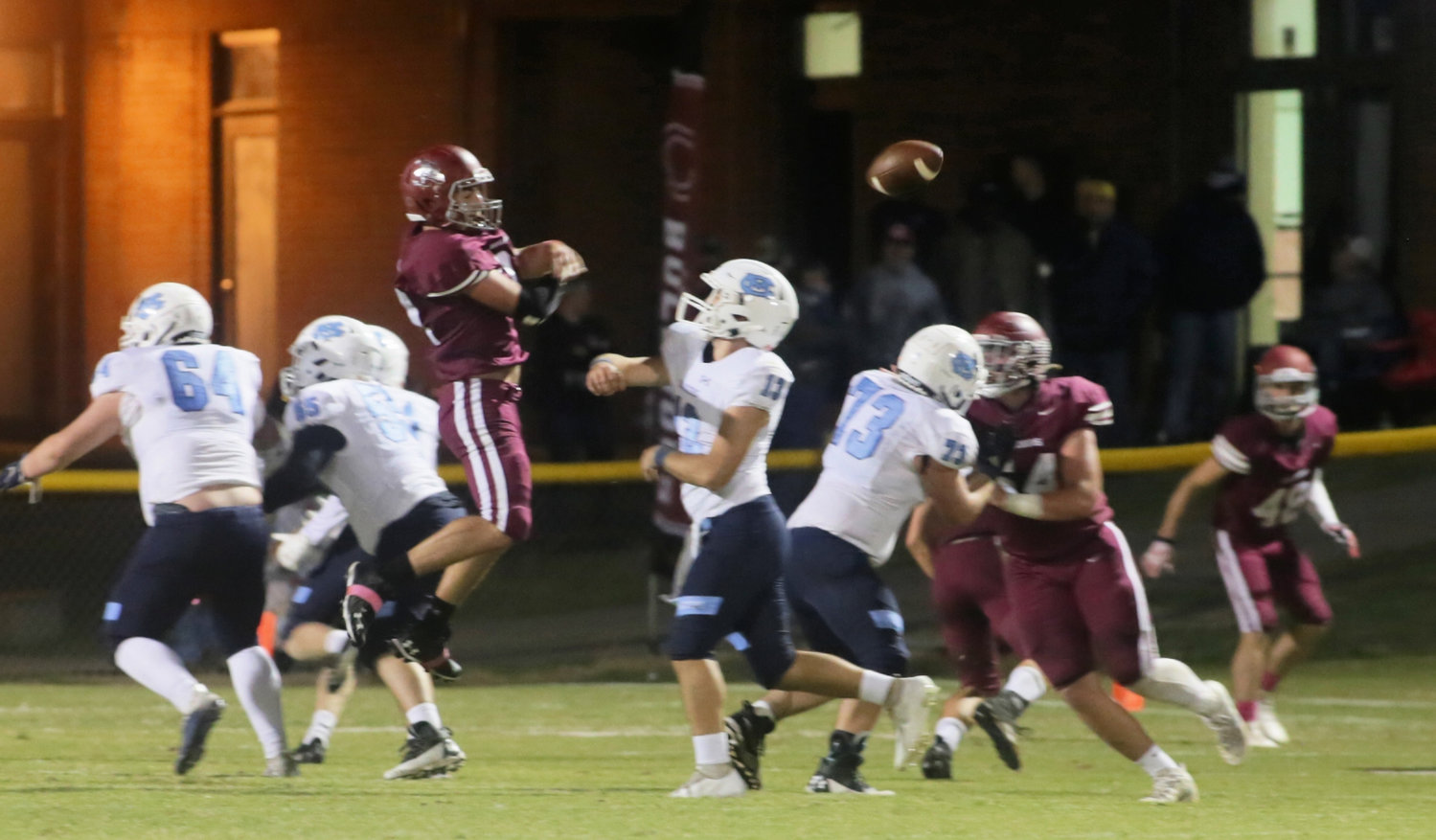 Tyler Brockman (48) positions himself to pick off a deflected pass.
Photo courtesy of Phillip Pullen 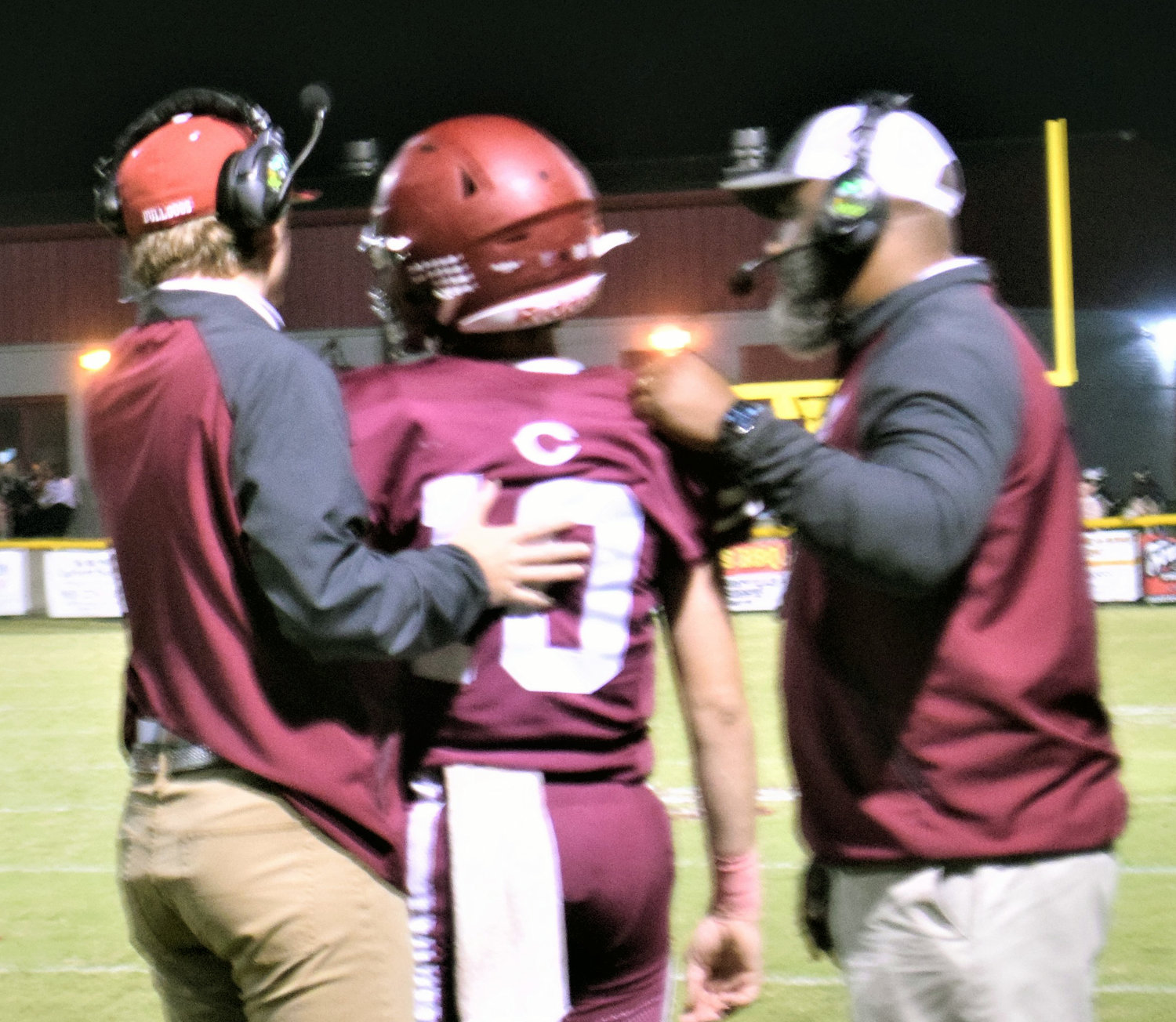 Caden White gets some sideline coaching from head coach Gerard Randolph.
Tribune Photo by Dennis Holley
Previous Next
Posted Thursday, October 28, 2021 9:51 am
By Dennis Holley ~ For the Tribune

CORNERSVILLE — With the moon glowing in the eastern sky, on a cool October evening just meant for “Football Friday,” the Moore County Raiders (3-5, 2-2) came to Cornersville to face the hometown Bulldogs (6-2, 3-1).

The Bulldogs, needing a win to wrap up second place in Region 5-1A and in the process gain a home game for the opening round of the TSSAA playoffs, used a mammoth night by running back Ben Franklin, who rushed for 295 yards on 20 carries, scored five touchdowns and converted a two-point conversion, turning a close game into a 35-14 rout of the Raiders.

“The guys came out physical, we came out hot on offense and defense. We ran into adversity early on with their passing game, but we settled down and made some adjustments. Super proud of the guys, excellent job they did,” Coach Gerard Randolph said.

Franklin’s big night was reminiscent of the days when Eli Woodard and Cam Whitaker dazzled the crowds at “Frog Bottom,” and the hometown crowd fell in love with the soft-spoken young man with the lightning speed as he ran through, ran over, and ran by the Moore County defenders.

When asked about Franklin’s night Randolph said, “Ben showed up and showed out. I told him this week we are going to need you and he said, “I got you Coach.” He had a great game.”

Big Ben’s lineman Blake Jones added excitedly, “Big Ben is probably the most willing person, especially when he wants to be like he did tonight. He really had a great night. He grew up tonight. I’m excited to see him in the playoffs.”

The Raiders won the coin toss and elected to receive the kick-off.

Cornersville’s Eli Welch booted the ball to the Raider 15-yard line where Moore County’s Dawson White gathered it in and ran  to the 30-yard line, where Hunter Fitzgerald for the Bulldogs brought him down.

The Raiders then began a 10-play drive utilizing the short pass to gobble up 10 to 15 yards at a time, moving the ball to the Bulldog eight-yard line as Moore County quarterback Connor Partin found Keller Morey open on the right side and the sophomore wide receiver ran into the end zone.

Blake Bradford then split the uprights with the PAT and Moore County led 7-0 with 6:27 left to go in the first quarter.

The Bulldogs began their initial drive of the game at their own 34-yard line with a 13-play drive featuring the running back arsenal of Riley Qualls, Wesley Pigg, Ben Franklin, Mason Calahan, and quarterback Caden White.

Eating up the yardage and imposing their will on the Raider defensive line, the Bulldogs faced a third and two at the Moore County two-yard line, and there White handed the ball off to Franklin who burst through to score the first of his five TD’s.

Logan Springer booted the PAT and the score was tied 7-7 with 2:25 left in the first quarter.

The Bulldog defense then began to apply pressure on the Raider offense as they still were throwing short passes, but because of the pressure the drive bogged down at the Bulldog 45-yard line where Moore County punted the ball to the Cornersville 31-yard line.

The next Cornersville drive was stopped by a fumble on second down that gave the ball right back to the Raiders at the Bulldog 40-yard line.

The Raiders then, after two false start penalties, faced a fourth and 15 from the Bulldog 30-yard line but they were denied when Cornersville’s defensive end Eli Welch stopped the Raider runner after a gain of three yards and the Bulldogs took over.

The first play was a hand-off to Franklin, sweeping around the left side, who made the corner and was gone, easily outrunning the Raider secondary for a 73-yard touchdown run, and when Springer booted the PAT the Bulldogs led 14-7 with 7:52 left until halftime.

After the kickoff, the Bulldogs forced a punt as the Raiders went three-and-out, but after receiving the punt Cornersville was stymied by a Moore County interception.

Cornersville’s Tyler Brockman returned the favor on the next Raider possession, intercepting a pass with 3:09 left in the half, but the Bulldogs could not move the ball and Brockman punted the ball back to the Raiders.

Brockman then snared his second interception to stop the Raider drive and the Bulldogs were content to run out the clock to halftime leading 14-7.

The third quarter began with Cornersville pounding the Moore County defense with their running game.

Cornersville running back Mason Calahan along with teammates Qualls, White and Pigg pounded the ball but a fumble at mid-field gave the ball to the Raiders.

The Raiders promptly took advantage moving the ball downfield where on 2nd and 17 at the Bulldog 17-yard line MC’s Partin found Copeland in the endzone for the score and once again Bradford split the uprights to tie the game at 14-14.

The Bulldogs took the out-of-bounds kick-off at their own 35-yard line and Calahan burst through the Raider defensive line weaving his way for a 29-yard rush, but a holding penalty negated the run placing the ball back at the Bulldog 44-yard line.

Franklin then got loose for a 13-yard gain and then on the next play, Franklin shook loose would-be Moore County tacklers, found the open field, and outran the rest, scoring on a 43-yard touchdown.

The Raiders blocked the PAT and the Bulldogs led 20-14 with 5:48 left in the third quarter.

Cornersville got the ball back with 3:45 left in the third and started a drive featuring Qualls, Pigg and Franklin rushing the ball and moved to the Raider six-yard line when the third quarter ended as the Bulldogs maintained their six-point lead, 20-14.

The first play of the fourth quarter was a hand-off to Franklin who burst through a hole supplied by his offensive linemen and scored his fourth TD, then ran in the two-point conversion to push the lead to two touchdowns, 28-14.

“We hang our hat on being a physical football team from the first to the fourth quarter. We strive to have our players in shape. They do an excellent job,” Randolph said

After a three-and-out, Moore County punted the ball to the Cornersville 33-yard line where the Bulldogs called on Franklin for three successive runs, for 11 yards, for four yards and then to top it off, a 52-yard run leaving behind the sprawled-out Raider defenders.

The rest of the game saw the Raiders gamely trying to get things going but the Bulldog defense with Rhett Woodard, Pigg, Powers and Estes denying any momentum change.

With this win the Bulldogs gained second place in Region-5-1A and a home playoff game in two weeks.

Randolph told his team after the game, “I’m proud of all of you and I love you. The playoffs are back in Cornersville, back in black. You seniors were here when we made our deep run in ’18. It is time to do it again. Let’s go get it. I’m excited for the playoffs. Fantastic job.”

The Bulldogs finished the season with an overall record of 7-2 and 4-1 in Region 5-1A.

Cornersville will know its playoff opponent after next Friday night's results.