CHAPEL HILL — The Community Vikings struck the first blow but it was the Forrest Rockets that had the last laugh in a Distric 7-AA clash on Tuesday night.The Viking scored in the top of the … 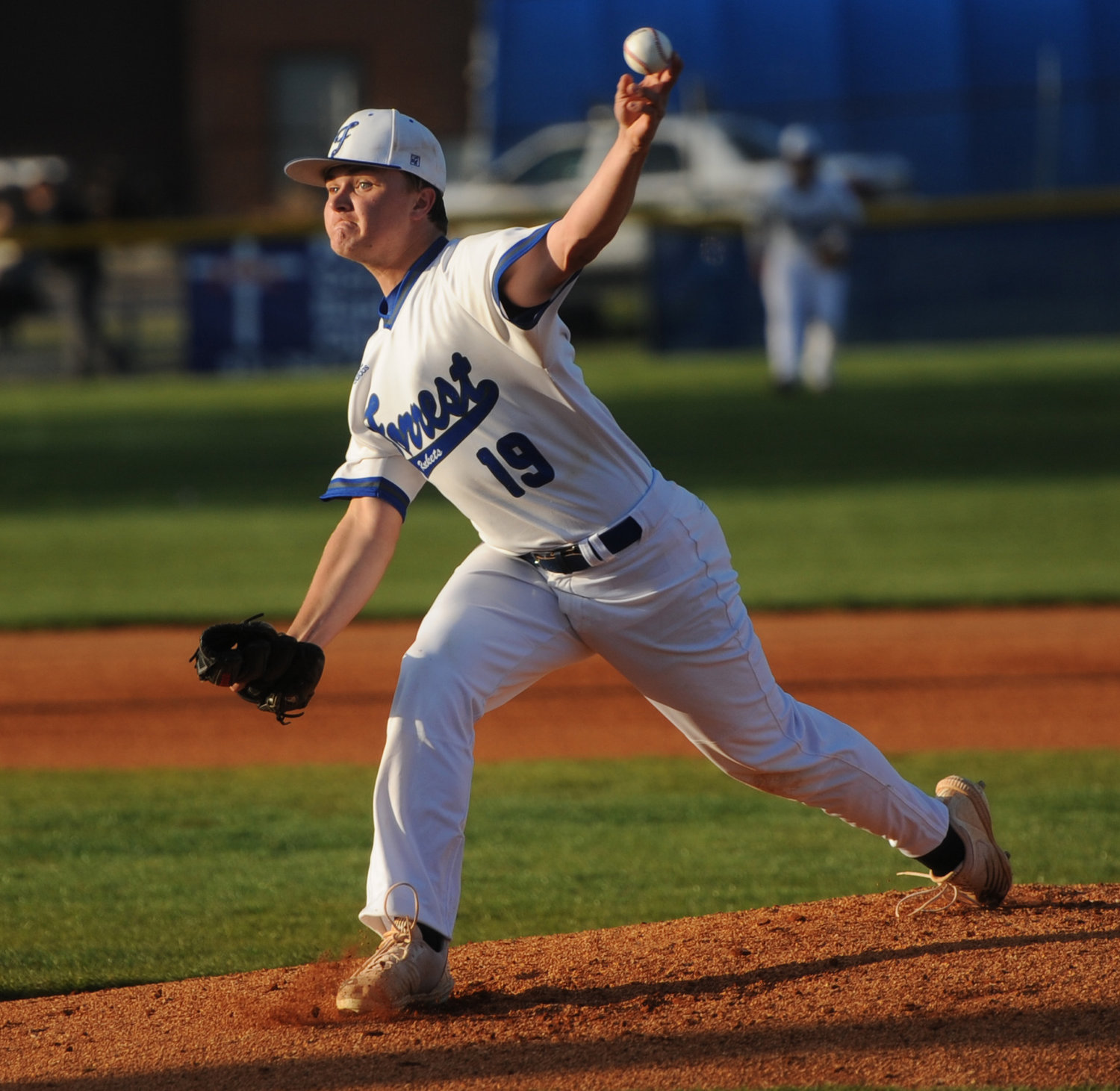 Brennan Mealer delivers a pitch in the first inning. He went 2 2/3 innings and allowed just one earned run to cross the plate.
Tribune Photo by Chris Siers 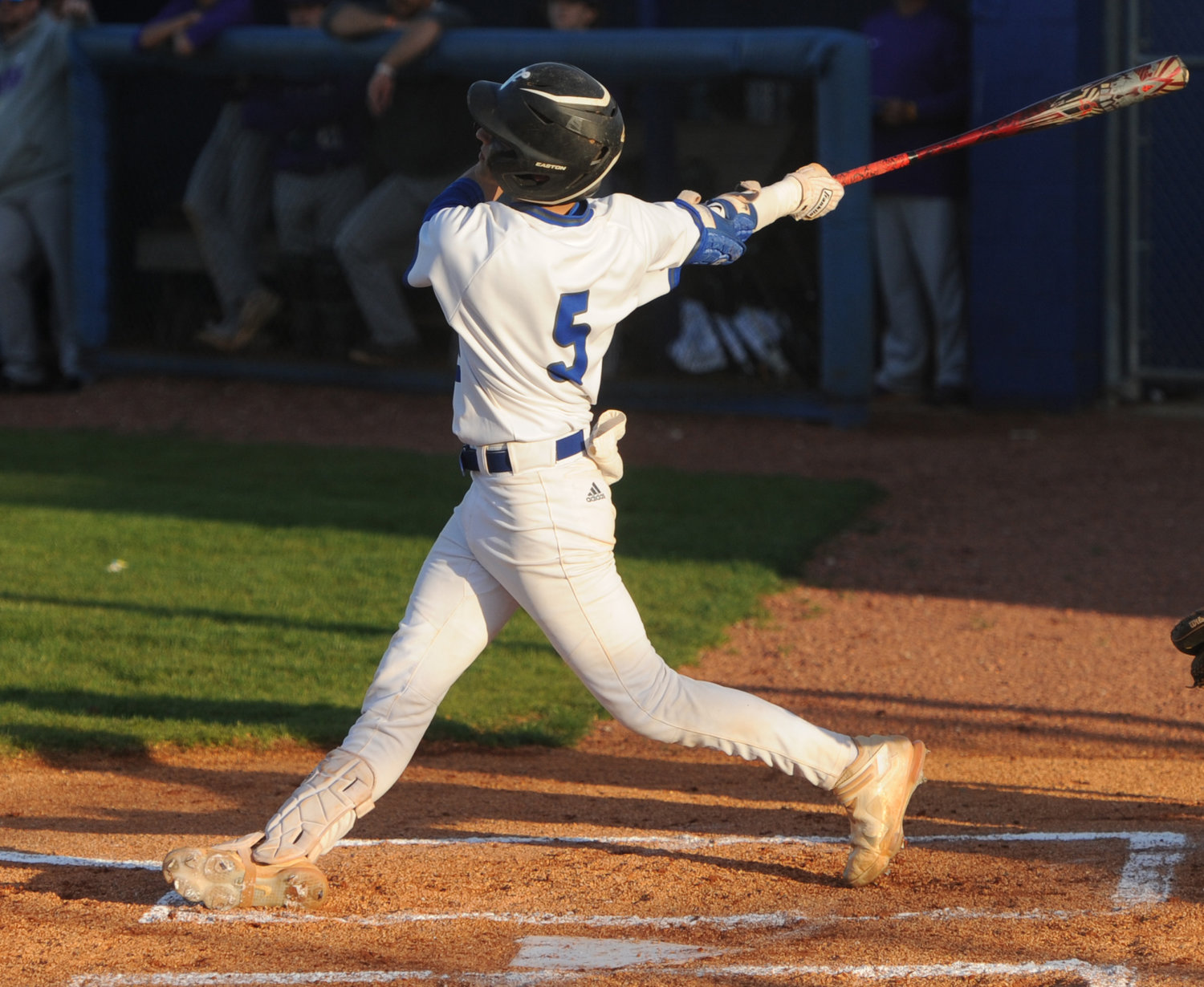 Cam Vaughn makes contact on a pitch in the first inning. Vaughn went 1-for-2 with two runs scored against Community on Tuesday night.
Tribune Photo by Chris Siers
Previous Next
Posted Wednesday, April 20, 2022 11:42 am

I don't think this team has even begun to scratch the surface of what their potential can be. If we clean up a few little things and continue to improve in other avenues and aspects of the game, I think we have the potential to be something special.”
Forrest coach Andy Burkett
By Chris Siers ~ sports@t-g.com

CHAPEL HILL — The Community Vikings struck the first blow but it was the Forrest Rockets that had the last laugh in a Distric 7-AA clash on Tuesday night.
The Viking scored in the top of the first inning, but the Rockets closed the game on an 8-1 run to take the 9-2 win over the Vikings.
“Proud of the way our guys played tonight. We stayed competitive all night, battled through some adversity and found a way to get the job and come out on top with a win,” Rocket coach Andy Burkett said.
Things got off to an inauspicious start for the Rockets in the top of the first inning as the Vikings were able to load the bases with the first three batters of the game on a pair of walks and a base hit.
The Vikings knocked in the game’s first run on a RBI single to right, but starting pitcher Brennan Mealer knuckled down with a strike out and the Rockets flashed the leather behind him and turned a double play to prevent a major inning by the Vikings.
The Rockets answered the early Viking score when Mealer scored on a passed ball to even the game at one run apiece.
Community again loaded the bases in the top of the third inning, with two outs, and it was Gage Underwood who was hit by a pitch to plate the second Viking run of the night.
Needing one out, Riley Durbin took over on the mound for Forrest and forced a fly out for the final out of the inning, once again ending the Community threat with the bases loaded.
Once again, Forrest answered, but with a five-spot in the bottom of the inning.
The Rockets put their first three batters of the inning on base with three-straight singles by Preston Gentry, Cam Vaughn and Durbin.
A hit batter with the bases loaded, a fielder’s choice and three RBI singles in the inning helped the Rockets break the game out to a 6-2 Rocket lead.
Durbin followed the third by sitting down six consecutive Viking batters.
It wasn’t until sixth inning that Community put another runner on base and with a lead off walk by Drew Harris and a single by Gage Underwood, it was the Rocket defense again answering the call with a 4-6-3 double play and a Durbin strikeout to end the threat for Community.
Riding off the defensive energy that ended the Viking half inning, Forrest went back to work in the bottom of the inning.
Two walks and a hit batter loaded the bases before Durbin and Mealer connected on back-to-back singles to drive in three more runs for Forrest.
Mealer, Kason Fuller and Carter Walk all finished the game with two RBIs to their credit, while Durbin was the only Rocket to record multiple hits in the game.
On the mound, Mealer got the start and went 2 2/3 innings, allowing one earned run on three hits while striking out two.
Durbin worked the final 4 1/3 innings in relief, giving up just one hit and striking out three.
With the regular season title in hand, the Rockets will have home field advantage throughout the District 7-AA tournament, regardless of opponent.
For Burkett, feels his team is just on the cusp of tapping it’s potential that could unlock a deep postseason run.
“I don't think this team has even begun to scratch the surface of what their potential can be. If we clean up a few little things and continue to improve in other avenues and aspects of the game, I think we have the potential to be something special,” he said.
The Rockets played a makeup game against Cascade on Wednesday, however results were unavailable by press time.
Forrest will close a busy week against No. 1 Class-A ranked Eagleville on Thursday and Page on Friday.