Rockets in control of playoff destiny after bye week

After a grueling seven weeks of tough football games, including a huge 24-7 win at then unbeaten Cascade last week, the ninth-ranked Forrest Rockets (5-2, 3-0) control their playoff …

Rockets in control of playoff destiny after bye week 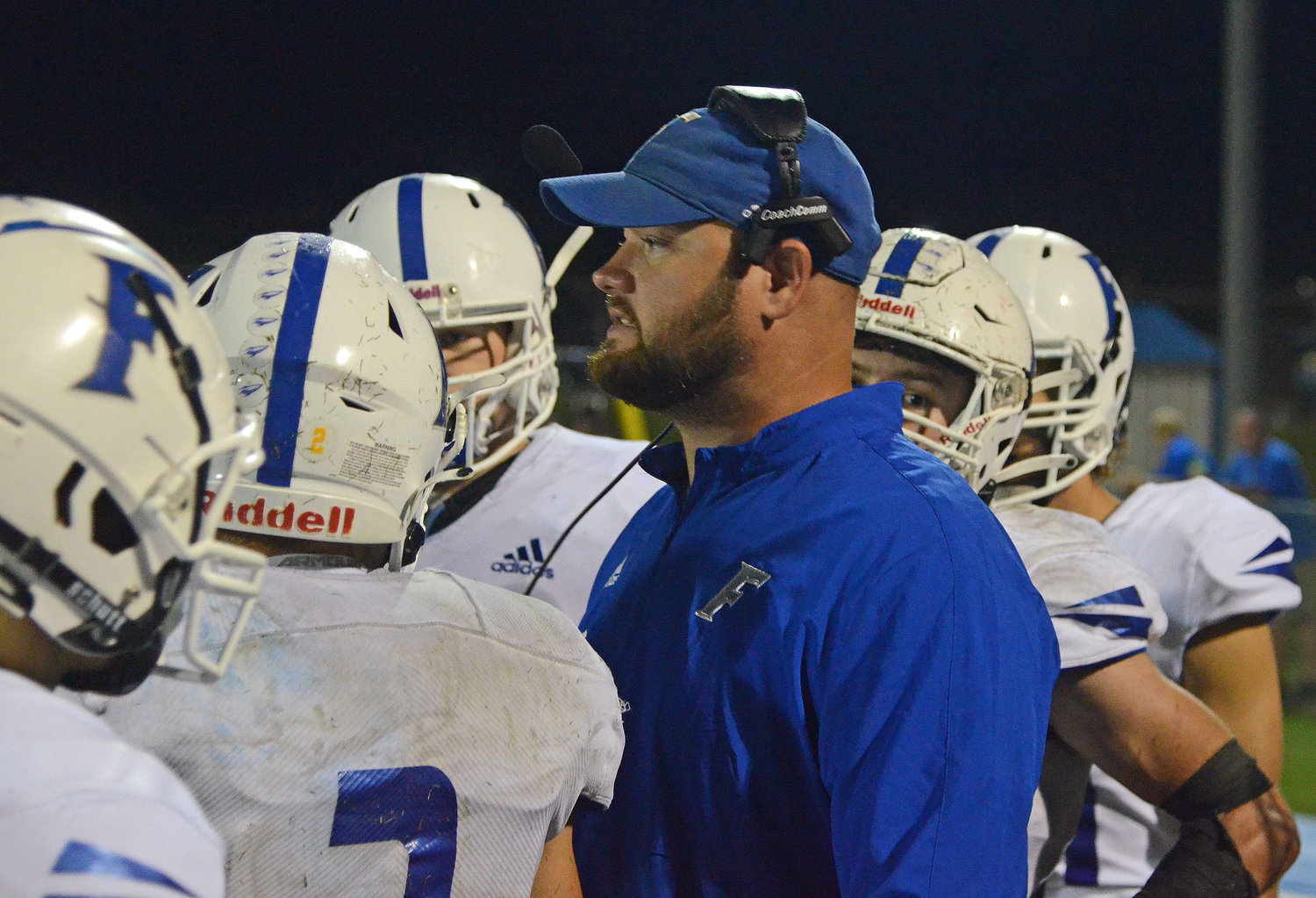 Forrest head coach Eli Stephenson has the Rockets on the cusp of a second region title in three years as he takes his squad to Richland Friday night.
Tribune photos by Anthony S. Puca 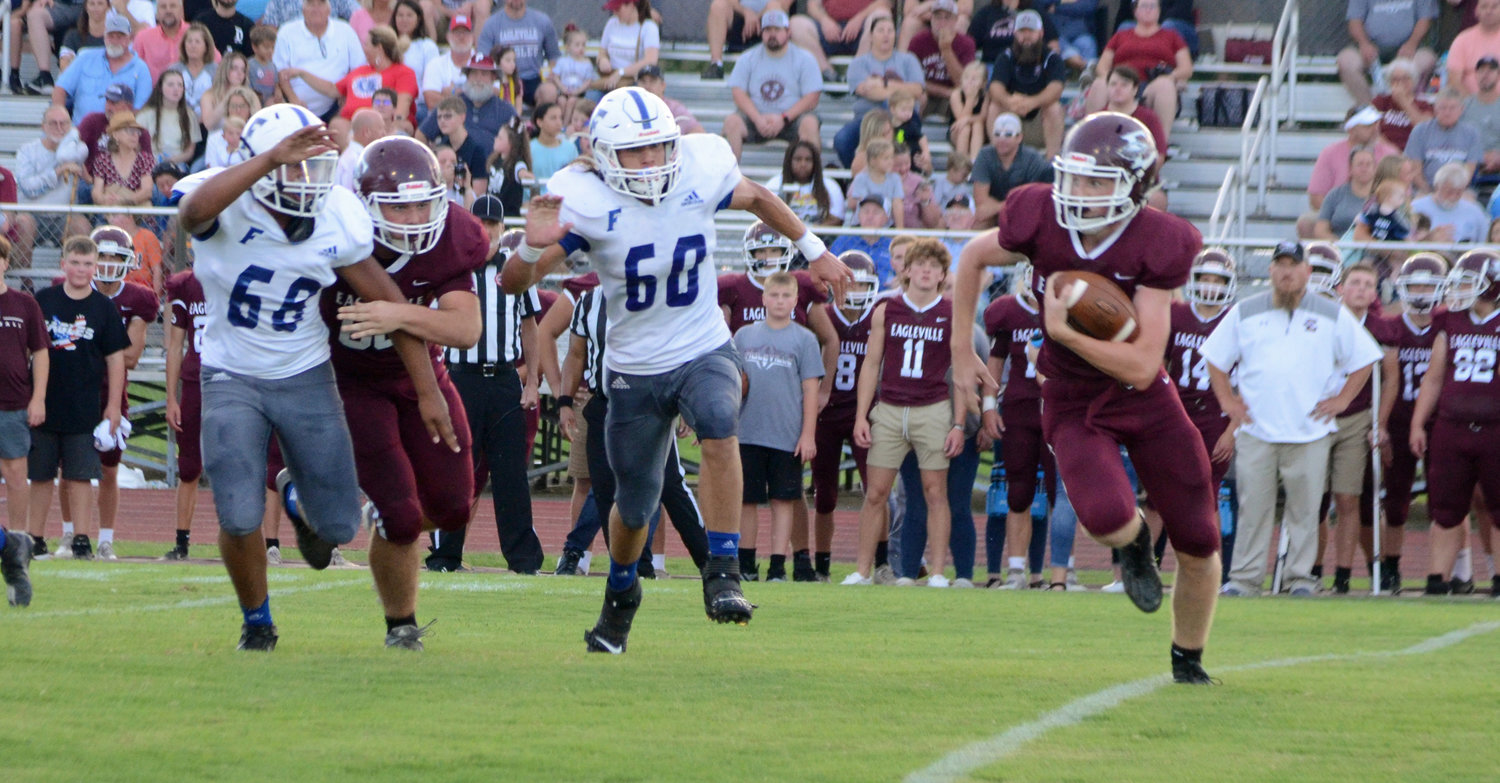 Sophomore Reggie Pearson (68) and senior Layne Strasser (60) chase down an Eagleville player in the season opener for the Forrest defense that has been a stingy unit the entire 2021 campaign.
Previous Next
Posted Thursday, October 14, 2021 6:44 am

“It was good to rest up and recover from some bumps and bruises,” Stephenson said. “We have been working to get better every day and we will continue to do that.””
Forrest coach Eli Stephenson
By Anthony S. Puca Sports Writer

After a grueling seven weeks of tough football games, including a huge 24-7 win at then unbeaten Cascade last week, the ninth-ranked Forrest Rockets (5-2, 3-0) control their playoff destiny.

Chapel Hill is coming off a bye week before heading to Giles County Friday night to take on the Richland Raiders (4-3, 1-2) in a crucial Region 2A contest.

“It is good to be in control of your own destiny,” Forrest coach Eli Stephenson said. “This is the region championship, if we take care of business we will lock it up.”

Stephenson gave the guys some much-needed time off during the school’s fall break period before getting back to work to prepare for a very good Richland squad.

“It was good to rest up and recover from some bumps and bruises,” Stephenson said. “We have been working to get better every day and we will continue to do that.”

Besides getting steamrolled at Marion County, the Rockets have been involved in six close defensive struggles and have held their three region opponents to just seven points a game while averaging 23.3 points on offense in those league battles.

Forrest also holds the all-important edge in the turnover category with an 11-8 advantage in all of its games this season.

“The defense has been playing great all year,” Stephenson said. “Coach (Ryan) Bridges does a great job of coming with a game plan each week and installing it. The players believe in the scheme and play fast and physical.”

Forrest has come up with several big plays on defense this season with seniors Layne Strasser, Braden Bowyer, Wilson, Davis, Dominic Smithson, Braden Jones, Hammond, and Bennett all finding their strides in the lockdown system.

The Raiders are right behind the Rockets in points allowed (12 points per game) and points scored (22 points per game) in the region and Stephenson and the team are not taking anyone for granted this time of the season with this much at stake.

“They are big and physical and they have gotten better as the season went on,” Stephenson said. “It's going to be a tough game this week.”

The Rockets are going to run the ball as are the Raiders, so the night will be full of old-fashioned rock em sock football.

“They play sound and fundamental defense,” Stephenson said. “Their inside linebackers do a great job of coming downhill and getting to the ball.”

The Raiders will have to stop a Forrest rushing attack that has accumulated 1,459 yards on the season with senior Chris Davis leading the way with 52 carries for 312 yards and three touchdowns.

Hunter Bennett has rushed for 133 yards on 27 carries and leads the team with four touchdown runs while the senior quarterback has completed 26-of-55 passing attempts for 239 yards.

Burchell has the only touchdown pass so far by the Rockets when he found Christian Hammond on a 65-yard half back option pass versus Cornersville in Week 2.

Burchell has five catches for 13 yards, Tyler Ayers has four receptions for 34 yards, Wilson also has four for 14 yards, and Bell (24 yds.) and Davis (12 yds.) have one catch apiece.

The two teams have not played since 2010, but have squared off many times in the past with Forrest holding 4-2 advantage since 2003, including the last three times they have met.

The Rockets finish the regular season schedule with home games versus East Robertson (3-4, 1-2) next week and the season finale versus Mt. Pleasant (3-4, 1-2) on October 29.