Rockets grind out ugly win for 3rd in 7-AA

UNIONVILLE — The thing about ugly wins is they count the same as the pretty ones.While the District 7-AA consolation game between the Forrest Rockets and Grundy County Yellow Jackets (14-13) …

Rockets grind out ugly win for 3rd in 7-AA 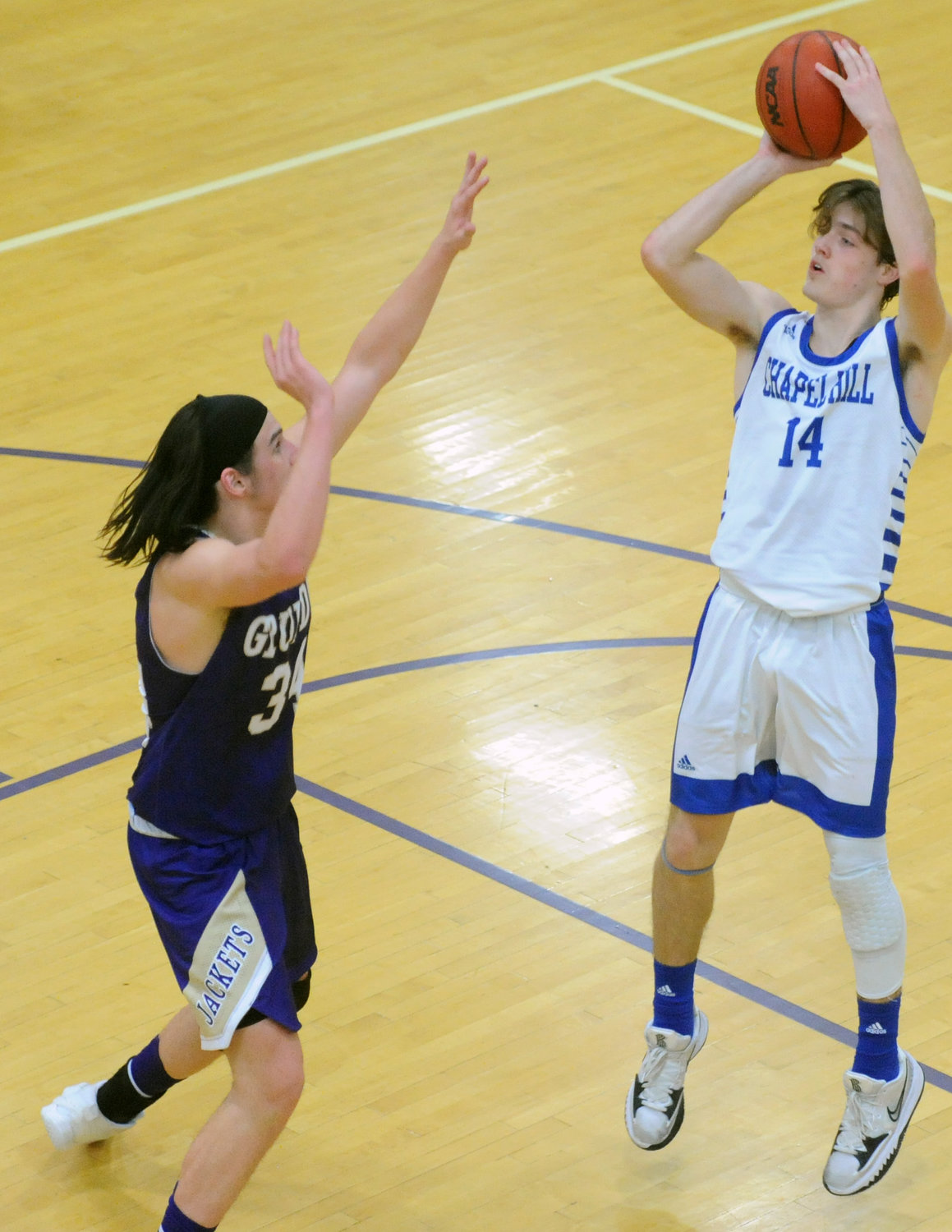 Hunter Bennett pulls up for a jumper in the fourth quarter. He caught fire in the final frame and scored 14 of his total 24 points in the quarter.
Tribune Photo by Chris Siers 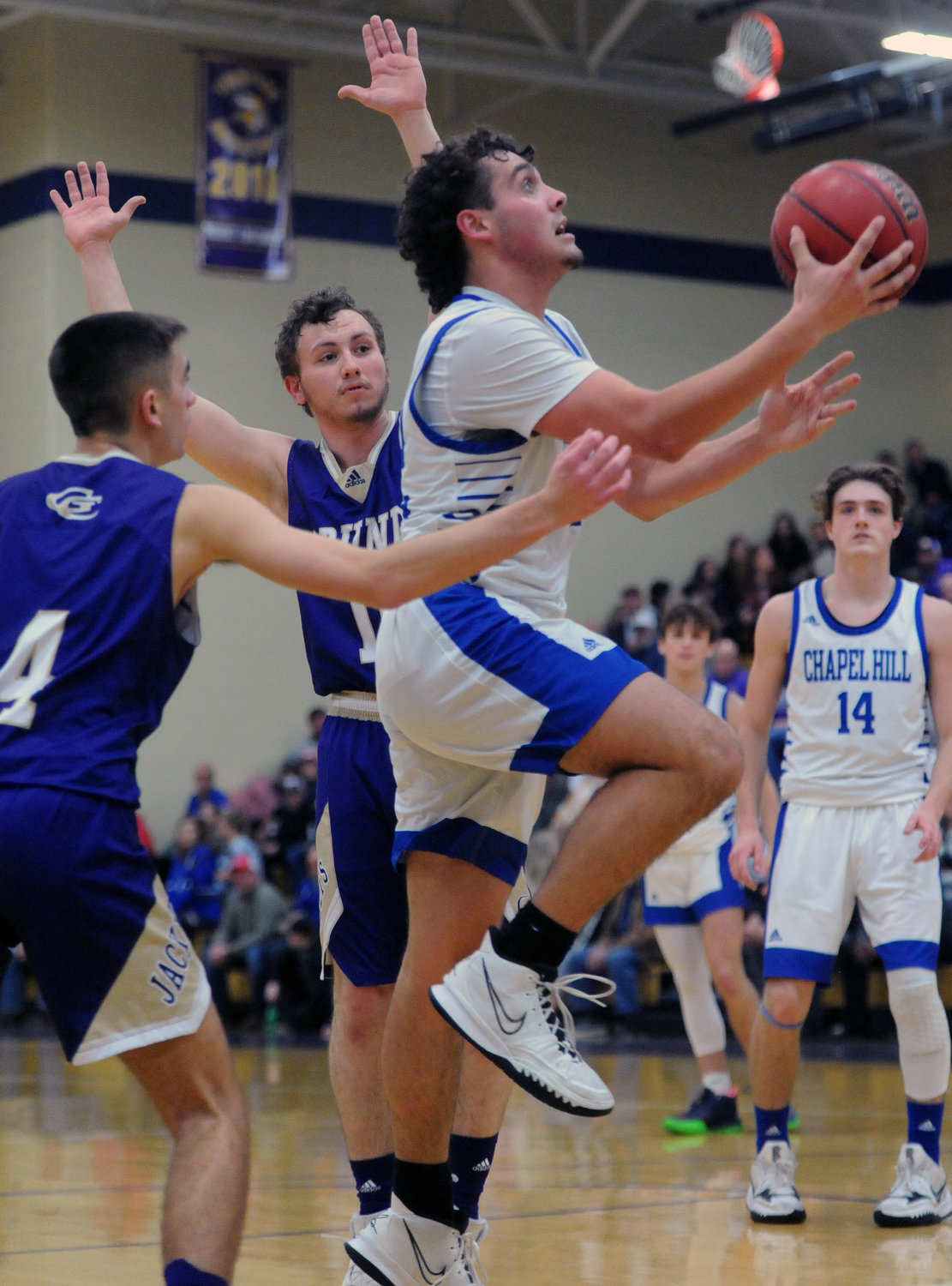 Davin Porter charges the rim and goes up for two. He led all scorers in the 7-AA consolation game and finished with 28 points.
Tribune Photo by Chris Siers
Previous Next
Posted Tuesday, February 22, 2022 12:24 pm
By Chris Siers ~ sports@t-g.com

UNIONVILLE — The thing about ugly wins is they count the same as the pretty ones.
While the District 7-AA consolation game between the Forrest Rockets and Grundy County Yellow Jackets (14-13) was anything but pretty, in the end, the one-two punch of Davin Porter and Hunter Bennett was enough for the Rockets (11-15) to claim the 75-64 win and finish third in the tournament.
A total of 43 fouls was called in the game, which forced Rocket head coach Shane Chapman to turn to the bench to bridge the gap with starters in foul trouble.
“I’ve talked about being a team effort all year long. We had a kid that had to come in and play the point guard spot in the second half. Jimmy Bond who has had about a minute of time all season long, came in and did an excellent job in the short amount of time that he played. And we just had guys step in and did things to help put them in position to grind out an ugly, ugly win. I’m proud of my guys and proud they found a way to win,” he said.
In the early goings, Forrest found a mismatch in the half court and was able to work the ball to Davin Porter on backdoor cuts to help the Rockets jump out to an early lead.
Of the Rockets’ 16 first-quarter points, Porter mustered up seven.
But fouls quickly piled up and with 3:51 to go in the opening quarter, the Yellow Jackets were at the line for the one-and-one bonus.
Grundy County managed to hang around in the first quarter and eventually tied the game by the end of the period by working the free throw line and connecting on timely 3-pointers.
In the first quarter alone, Grundy County shot 6-of-9 free throw attempts and got a pair of 3-pointers by Sam Parsons and Gavin Hobbs.
After Grundy County tied the game at the end of the first quarter, the Rockets went back to work and scored six-straight points to open the second quarter and led by eight after a 3-pointer by Porter with 3:09 to go.
By halftime, five different Rockets had been whistled for two fouls, with Deason Jones having three by the break.
Even being called for 14 fouls, the Rockets out-scored Grundy County 19-9 in the second period and led 35-25 at the intermission.
In the third quarter, Grundy rallied around Gavin Hobbs, who went for 12 of the Yellow Jackets’ 24 points in the quarter, including a pair of 3-pointers, to cut the Rockets’ lead to one possession.
Continuing to fight the foul trouble, the Rockets were able to tread enough water through the third quarter until Hunter Bennett was able to spark the Rocket offense in the fourth quarter.
With his ability to get to the rim, Grundy County simply had no answer for Bennett’s attack in the fourth quarter.
At one point, Bennett rattled off six-straight points for Forrest.
In total, he scored 14 of the Rockets’ total 28 fourth-quarter points.
He combined with Porter to score 52 points.
“Hunter and Davin together have began to gel really well together, working the high-post and low-post and vice versa. Davin is really starting to come on with his outside game. He’s been a great addition. Hunter is what he is. He led the team in turnovers tonight, but late in the game, found a way to get to the boards and get to the free throw line,” Chapman said.
Grundy County got big production from its big two players as well, with Parsons posting a team-high 25 points, including eight 3-pointers, while Hobbs added 19.
In total, Grundy County shot 18-of-27 free throws, compared to Forrest’s 9-of-15 effort.
Despite finishing third in the tournament, Forrest’s postseason is still alive, but the path proves difficult moving forward, as the Rockets will be on the road for the Region 4-AA quarterfinal on Saturday night.
“It’s going to be tough. We’re going to take a little time off and rest. We’re a little banged up. We’re going to prep it like every game we’ve played this season. We’re down to one game at a time and we’re going to try to find a way to win,” Chapman said.