SHELBYVILLE — It was a game of runs as Forrest claimed a 62-50 road win at Shelbyville Central on Tuesday night. 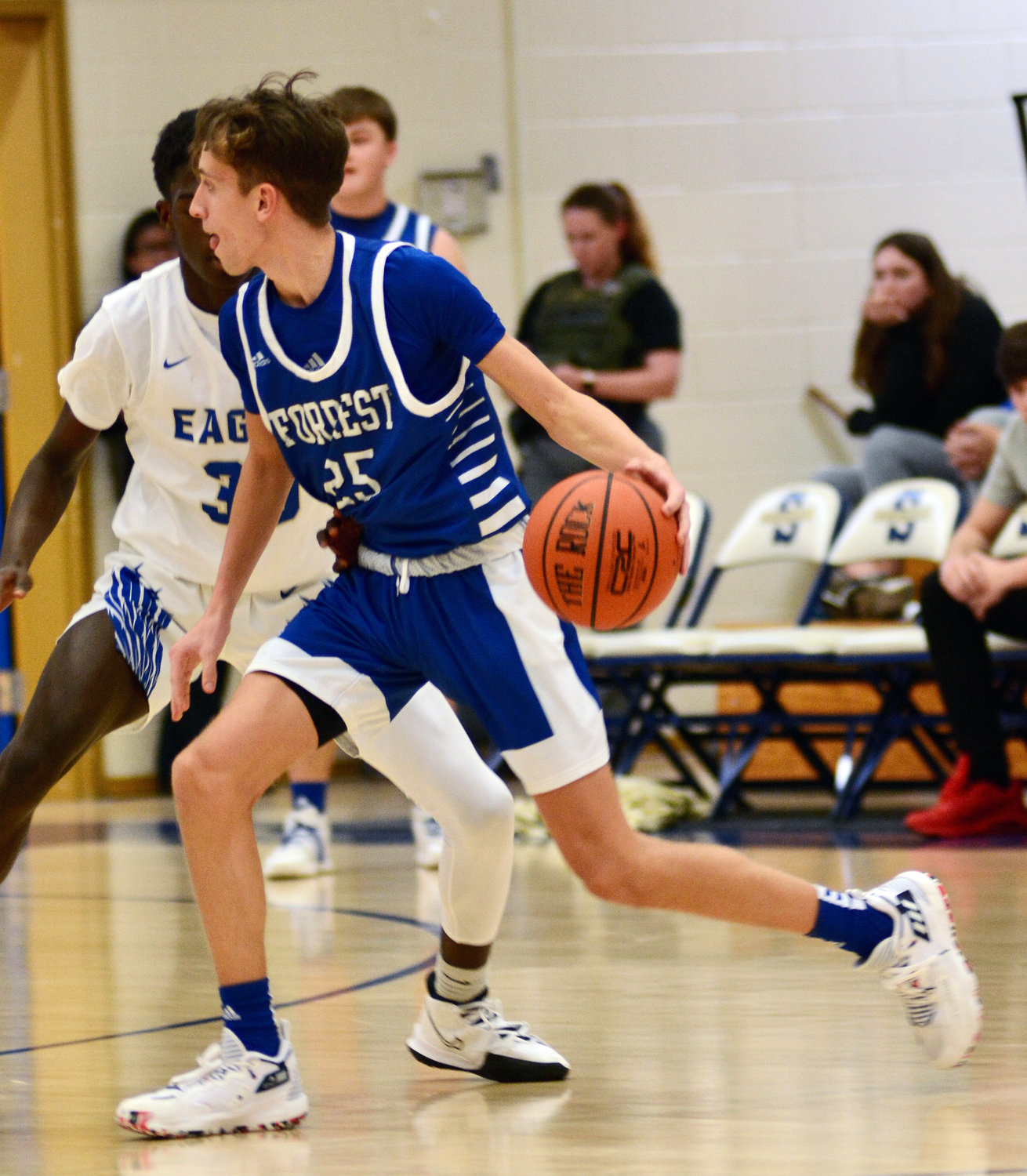 Forrest's Bray McGowan drives to the basket in the Rockets win on the road at Shelbyville Central on Tuesday night.
Tribune Photo by Gary Johnson
Posted Thursday, December 9, 2021 1:14 pm
By Gary Johnson ~ gjohnson@t-g.com
SHELBYVILLE — It was a game of runs as Forrest claimed a 62-50 road win at Shelbyville Central on Tuesday night.
The Rockets (4-2) jumped out to an early lead only to see the Eagles come roaring back before finding a way to close out the game in the final minutes.
"First off, I want to give Coach (Kody) Howard a lot of credit. He's got those guys really working hard and going in the right direction. He's got a ton of good athletes and I know he is try to change the culture here at Shelbyville. I know he is going to do that," Forrest coach Shane Chapman said.
"This game was tough. Their guys fought hard and I'm proud of my guys for their effort as well. We missed a few shots there in the fourth quarter and they went down and made a game of it. I'm glad my guys found a way to pull it out at the end."
The Rockets led 20-12 at the end of the first quarter and increased the lead to 36-23 at halftime.
Forrest was in control 44-32 after three periods but the Eagles battled back to cut the lead to 48-47 after a basket by Jason Ragland with 4:09 left to play.
The Rockets closed out the game with a 14-3 run to claim the victory.
"I thought the first half we were playing 1-on-5. We’ve got to learn to trust our teammates. We fell behind early and battled back, but it was just too much of a deficit to overcome," Shelbyville Central coach Kody Howard said.
Forrest connected on 23-of-37 free throws compared to Shelbyville Central's 6-of-13.
Andrew Timmons led the winners with 20 points while Zay Reese contributed 13 for the Eagles.
The Eagles were playing without three starters but that will never be used as an excuse.
"I don't like using that short-handed term," Howard said, "I want our guys to go out and play with who we have. I fully expect to win every time. We will keep on practicing hard and get better and better."
The Eagles  (2-4) entertain Lincoln County on Thursday night at 7:30, while the Rockets travel to Eagleville on Friday.
Forrest                    20   16   8   18 — 62
Shelbyville Central  12   11   9   18 — 50
Forrest (62): Deason Jones 4, Andrew Timmons  20, Hunter Bennett 10, Josh Rumley 12, Brennan Mealer 8, Tayton Swift 1, Bray McCowan 7.
Shelbyville Central (50): Tim Parsons 8, Terrance Johnsonb 9, Zay Reese 13, Jason Ragland 11, Micah Hefflin 3, Joe Harris 6.
3-Point goals: Shelbyville Central (6): Parsons 2, Harris 2, Johnson, Heflin; Forrest (2): Timmons,  Mealer.
Halftime score: Forrest 36, Shelbyville Central 23.