It was old-fashioned football in the mud as the Forrest Rockets travelled to Hohenwald Friday night for another Region 5-AA title tilt with the Lewis County Panthers, who scored once in the game and that was enough as they came away with 7-0 win to avenge a three-point loss at Chapel Hill last season in the regular season finale.

“Both teams came out hitting and they hit all night long,” Forrest coach Eli Stephenson said. “Both teams fought all night, it was a field position game and we just came up a little bit short.” 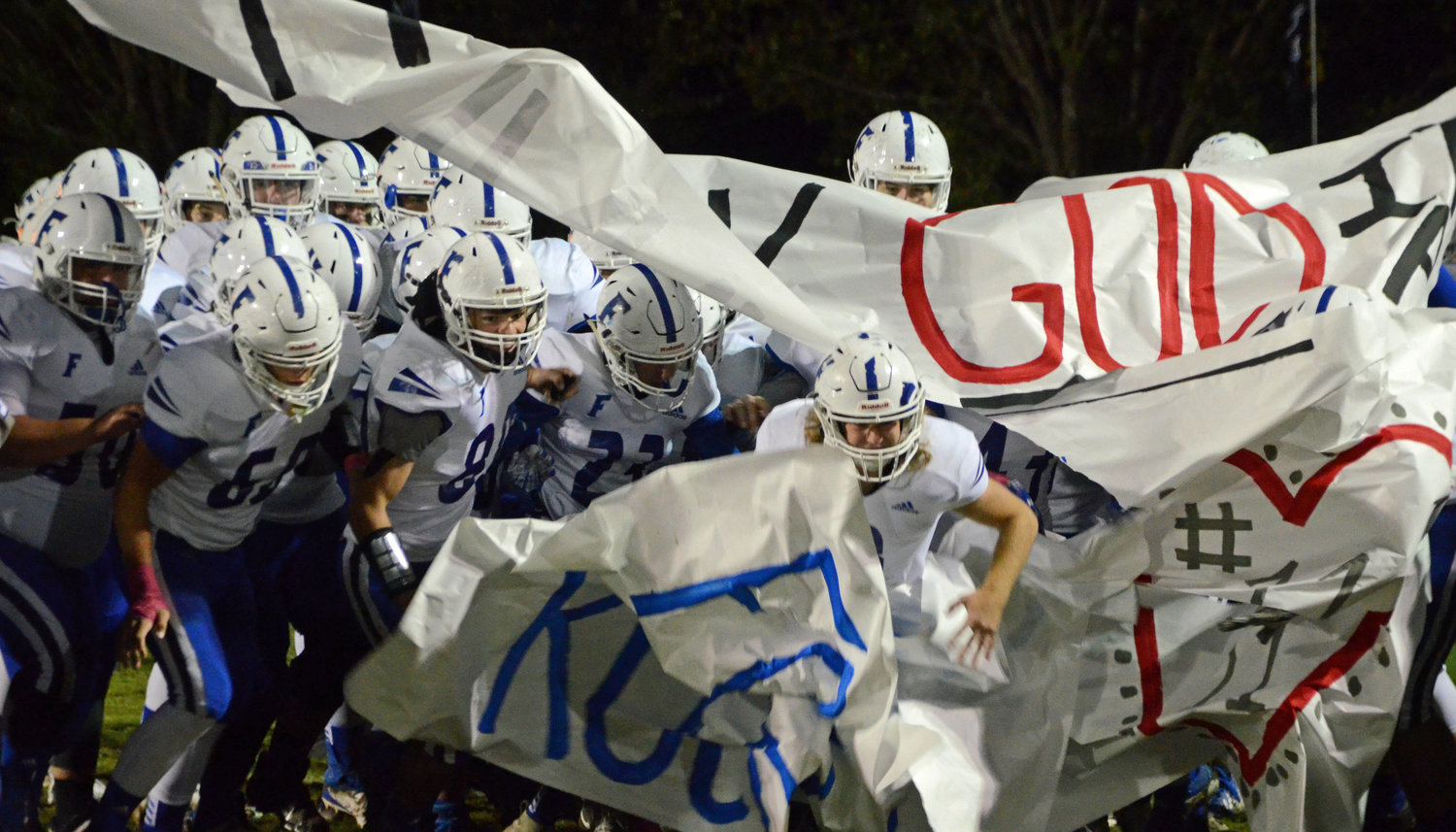 Forrest senior Hunter Pendley (center) busts through the banner first, leading the Rockets out on to the field for the Region 5-AA title tilt at Bobby M. Sharp Stadium in Hohenwald Friday night.
Tribune photos by Anthony S. Puca 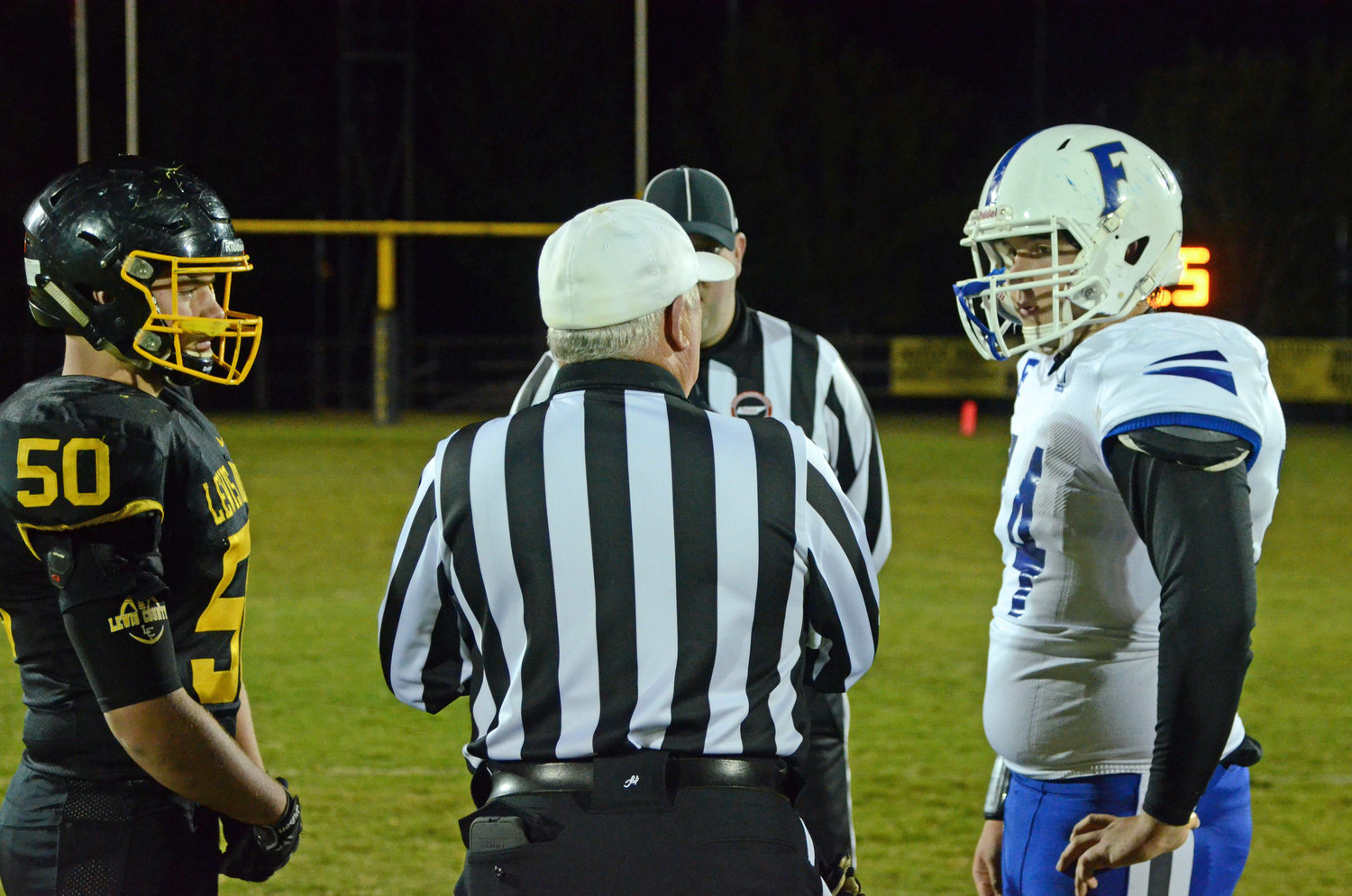 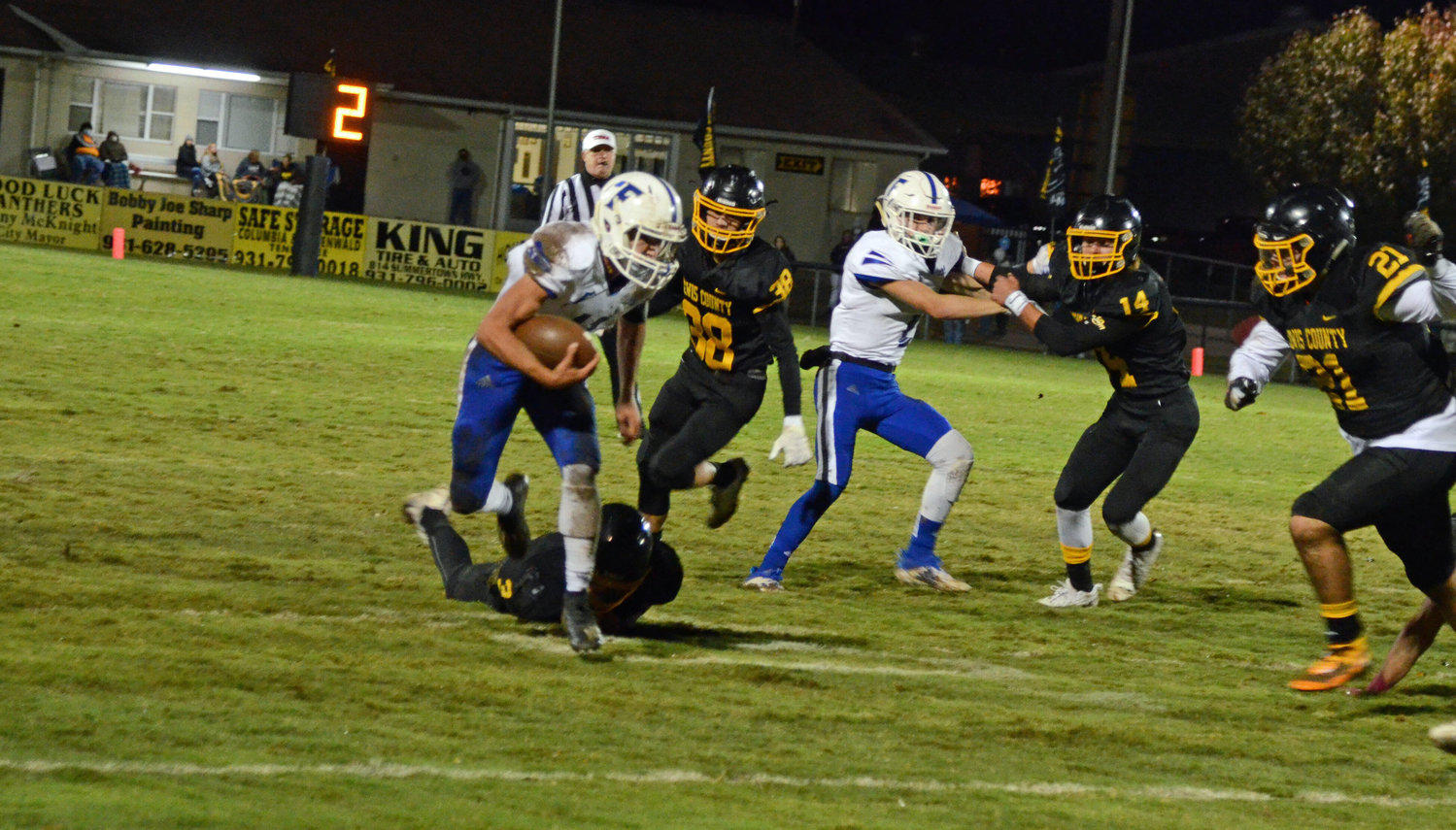 Brenton Burchell sheds a Lewis County tackler before breaking to the outside for a big 21-yard first quarter run. 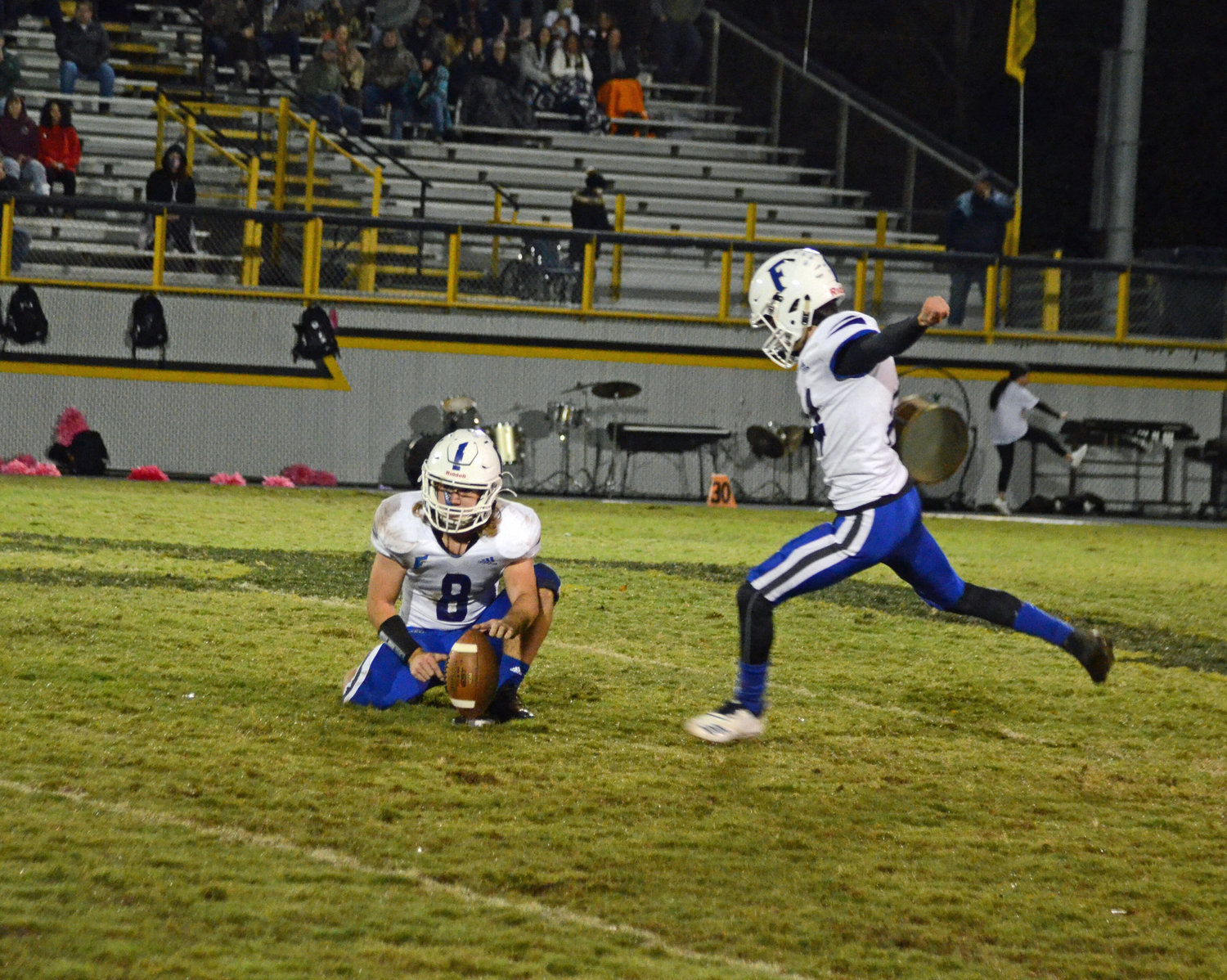 Forrest placekicker Carson Baker (14) comes up with the trick coffin corner kick near the end of the first half.

Boston Follis comes up with a sack on Lewis County quarterback Bryson James as the Rockets jailbreak the Wildcats’ backfield. 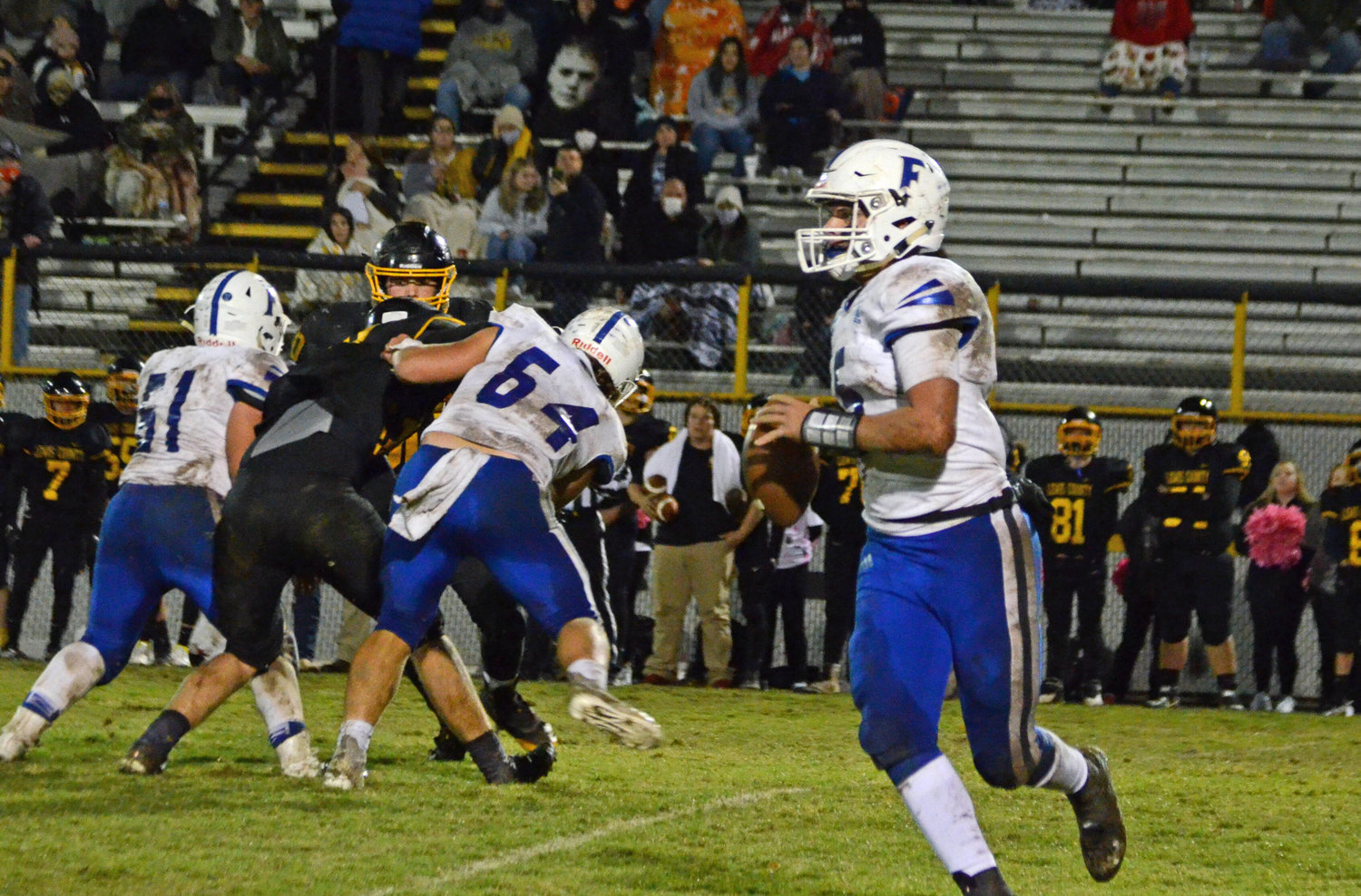 It was old-fashioned football in the mud as the Forrest Rockets travelled to Hohenwald Friday night for another Region 5-AA title tilt with the Lewis County Panthers, who scored once in the game and that was enough as they came away with 7-0 win to avenge a three-point loss at Chapel Hill last season in the regular season finale.

“Both teams came out hitting and they hit all night long,” Forrest coach Eli Stephenson said. “Both teams fought all night, it was a field position game and we just came up a little bit short.”

“Our boys played hard and they played together all night, I’m very proud of them and we have a home playoff game next week and I’m looking forward to it.”

The sloppy and slow field inhibited the Forrest running game that only gained 90 rushing yards in the contest.

Brenton Burchell led the Rockets with 57 yards on 10 carries while Tayton Swift ran for 22 yards and Joseph Whittaker rushed for 24 yards.

Senior Max Kirby was back behind center after missing the Cascade game and he threw for 98 yards on 9-of-22 passing attempts.

“Having Kirby back made us tick a little bit more,” Stephenson said. “We were able to move the ball and open it up a little more in the passing game to loosen them up and I think we did that.”

Whitaker had a team-high four catches for 23 yards, Burchell hauled down two Kirby passes for 31 yards, McAlister Wilson had one big 31-yard snag, and Cole Perryman and Swift had one reception apiece.

Both teams had trouble with the footing as they combined for just 16 first downs in the contest.

“They had a good defense, we could move the ball, but once we got in the red zone we could not finish and that was the problem in the game for us,” Stephenson said. “They had us pinned in the second half and we could not get out, so kudos to them.”

The Forrest defense has been stout all season, especially in Region 5-AA play, allowing a measly 5.3 yards per game in the four games that does not include the 1-0 COVID-19 win over Summertown.

“Our defense played well, they flew around all night and read their keys and they were physical,” Stephenson said. “Noah (Hill) was running the defense, our D-Line held up, our linebackers were physical and they were getting after it.”

Class 2A Mr. Football hopeful Blake Carroll was a one-man wrecking crew for the Panthers as the junior standout ran for 60 yards, caught one pass for 21 yards, threw the only touchdown pass of the game, played outstanding at cornerback with a late game interception, ran back all the kicks, punted, kicked off, and booted the extra point after the Lewis County touchdown.

Forrest won the coin toss and elected to receive, but went three-and-out and had to punt.

Fortunately for the Rockets, the Panthers botched the return and Wilson recovered the loose ball at their own 26-yard line.

“Carroll is a real good ball player, we did the most part of bottling him up on offense, but he got us with that one pass,” Stephenson said. “He does it all for them and is just a great high school football player.”

Forrest faced three consecutive third downs, but all three were converted on Burchell runs that eventually put the Rockets in scoring position at the Lewis County 24-yard line.

An incomplete pass halted the drive and Carson Baker came on to try a 42-yard field goal that was no good.

Both teams went three-and-out on their next possessions and the Panthers had the ball, facing a first-and-15 when the first quarter ended.

The Forrest defense held again to force another Lewis County punt and then the offense mounted another drive that went all the way to the Panthers’ 21-yard line where they were stuffed and fumbled the ball away on a fourth down play.

The Rockets would not budge, putting up another three-and-out on defense.

Forrest drove to the Lewis County 40-yard and faced a fourth down play when they brought on the kicking team for an apparent Baker field goal try.

Instead of trying the 60-yard field goal, Baker kicked the ball out of bounds at Lewis County 6-yard line on a legal kicking play.

It was the first time Stephenson ever used the odd, unused play in a game.

After much discussion, the coffin corner kick was allowed and the Panthers ran five plays before the first half ended in a scoreless draw.

Lewis County managed one first down on its first offensive series of the second half before being stopped, but a perfect punt by Carroll pinned Forrest deep at their own 4-yard line.

The Rockets went three-and-out and punted the ball back to the Panthers, who took over at the Forrest 35-yard line where they began a drive that was halted at the 17-yard line.

The Panthers faced a fourth-and-seven and called timeout to set up the play.

Carroll took the direct snap behind center and tossed a pass that was snagged by Kael Feichtinger for the touchdown.

Carroll booted the PAT through the uprights and the Panthers led 7-0 with 3:10 remaining in the third quarter.

The Rockets were unable to move the ball versus the Lewis County defense and had to punt again, but three plays later the Panthers fumbled again and Wilson came up with his second loose ball of the game with 15 seconds remaining in the third quarter.

Forrest still could not mount any offense and punted again and on the third play of the ensuing Lewis County drive, Kirby came up with an interception for the Rockets at the Panthers’ 35-yard line.

The Rockets moved 18 yards to the Lewis County 17-yard line, but a fourth down incompletion halted the potential game-tying scoring opportunity with 5:32 remaining in the contest.

The Forrest defense came up huge as the Panthers faced a fourth down play with 3:21 left, but a fake punt was called and Carroll threw to Sloan Moseley for a backbreaking first down.

Lewis County burned the clock down to 1:19 before punting the ball away and the Rockets drove to the 39-yard line when Carroll sealed the win with an interception on the sidelines.

“Our goal every year is to compete for the region title and we take it one week at a time,” Stephenson said. “We were glad we were here, we just weren’t able to finish, but we have one week and we are all 0-0 and winner moves on and loser goes home.”

The Panthers went in to victory formation to secure their first unbeaten regular season since 2013.

With the loss, Forrest (6-4) hosts the East Hickman Eagles (7-3) Friday night at the Murrey E. Holton Memorial Field in Chapel Hill, while the undefeated and third-ranked Panthers (10-0) host Scotts Hill (4-6).

“We have to have a good week of practice, we have to get our game plan in, we have to fix ourselves from this game and we have to just come out and play,” Stephenson said. “I know these boys, they came out and played hard tonight and they will keep playing hard, that’s one thing I know is that these boys will always play hard.”

Waverly (7-2) hosts Loretto (5-5) and Eagleville (5-5) travels to Decatur County Riverside (7-3) with Forrest meeting the Waverly/Loretto winner if they can come up with a victory in a first-ever meeting with East Hickman.