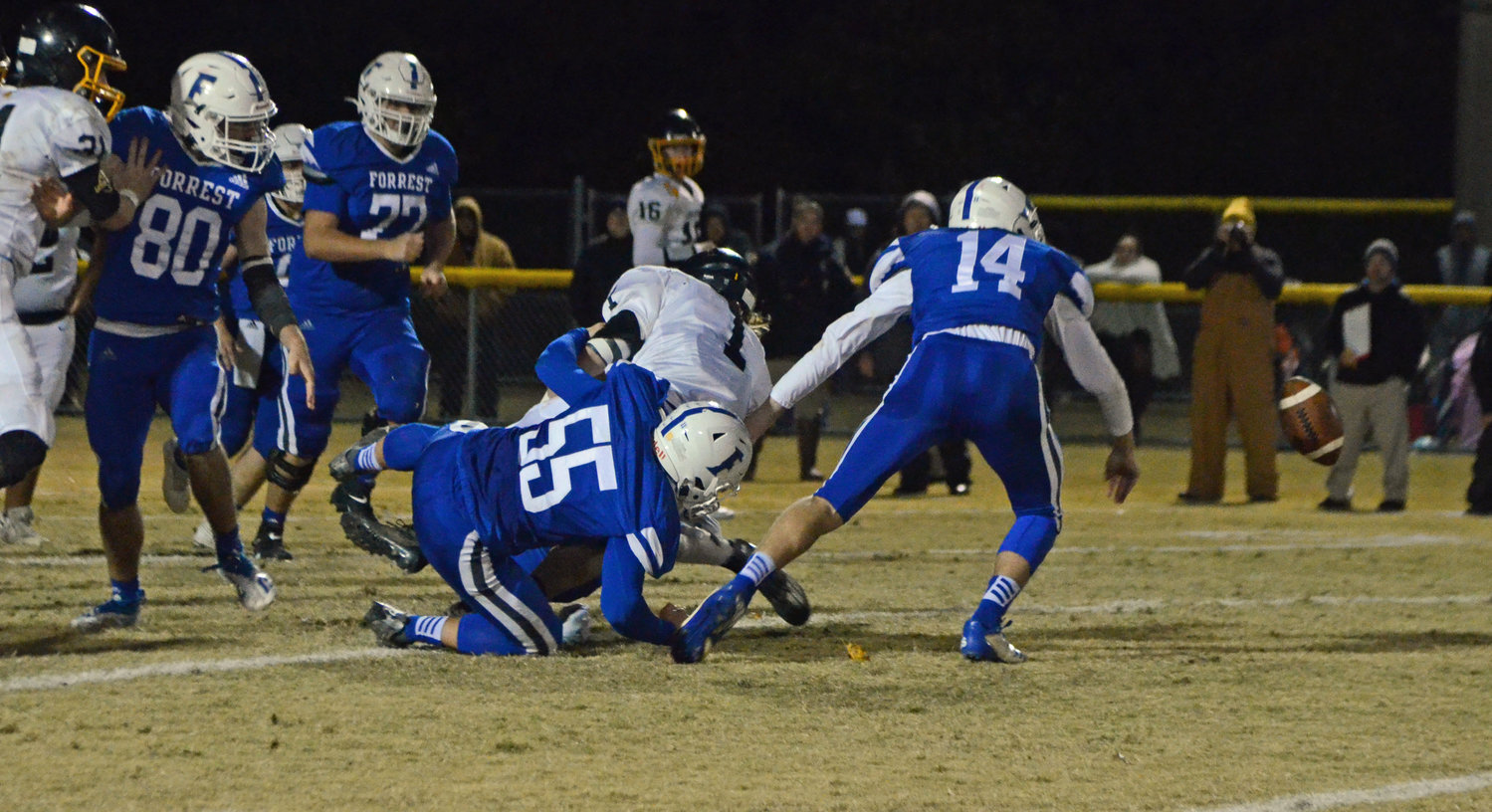 Senior linebacker Brayden Jones (55) causes a fumble that was recovered by Forrest’s Hunter Bennett (14) in the first half of Forrest’s big 13-6 win over Lewis County in the second round of the Class 2A playoffs Friday night at Chapel Hill.
Tribune photos by Anthony S. Puca 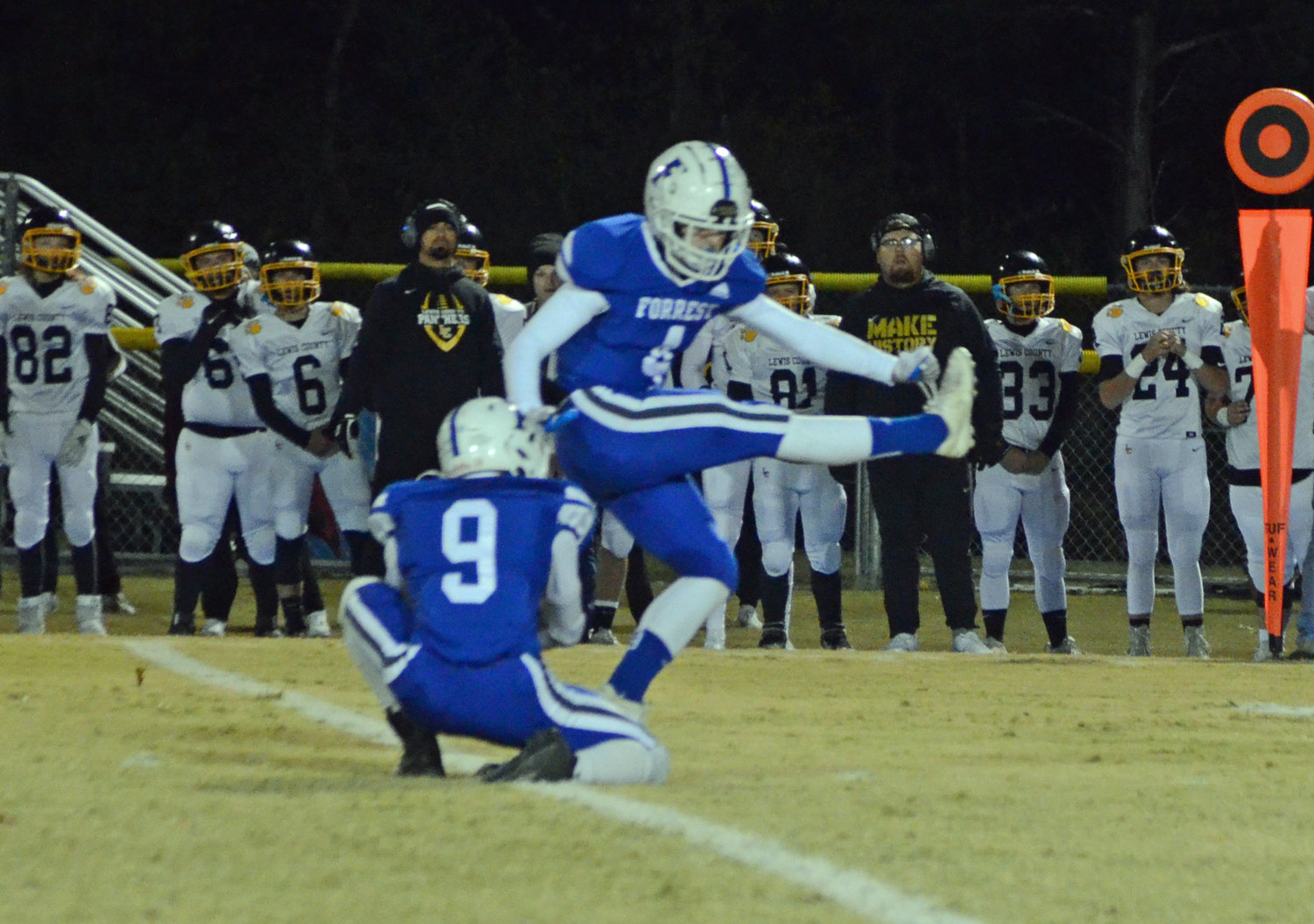 Forrest kicker Gavin Grissom nails the first of his two field goals in the game, giving the Rockets a 3-0 lead after their first drive of the night. 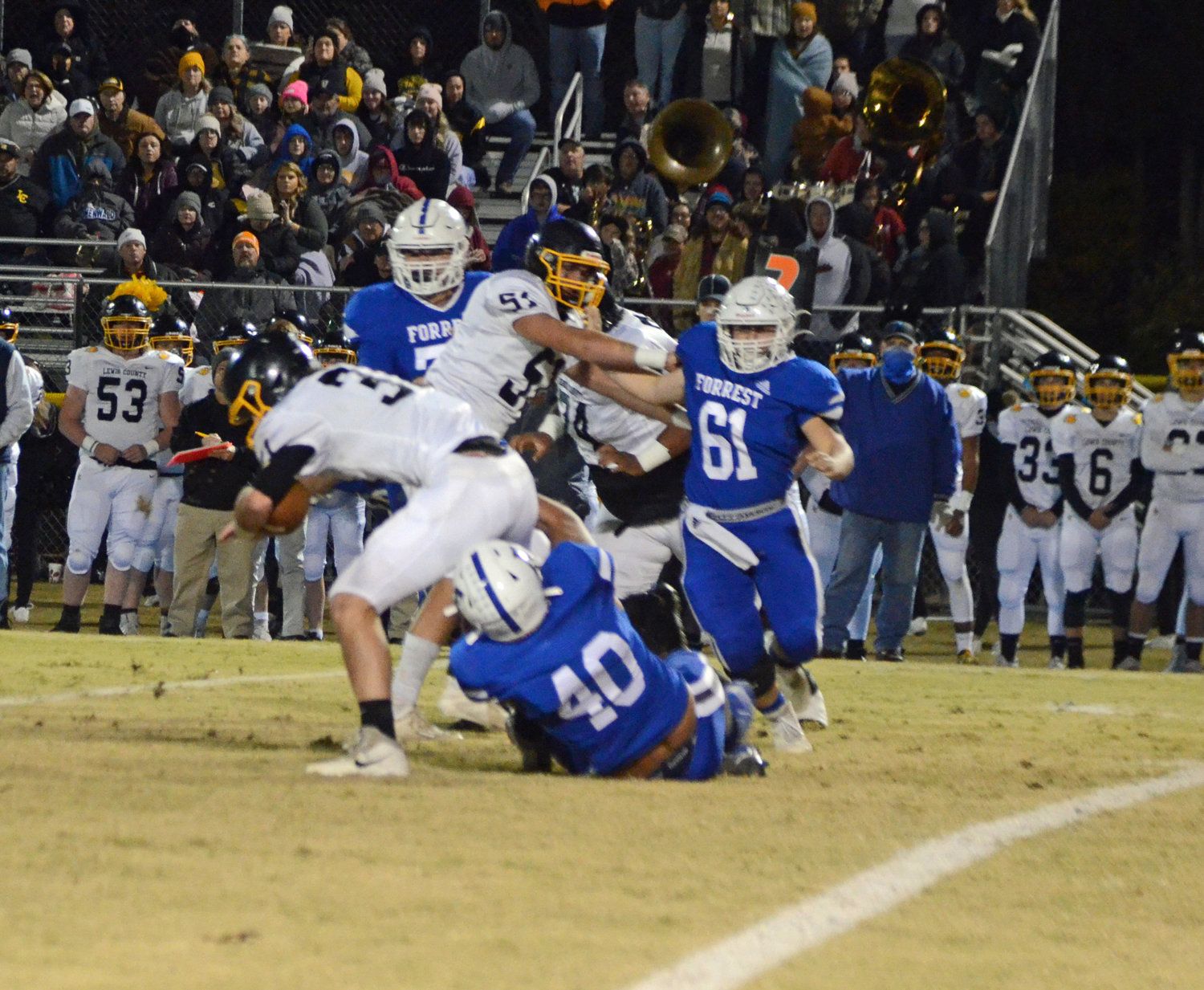 The Forrest defense stopped the Panthers all night as seen here with Dominic Smithson (40) dragging down Lewis County running back Lincoln Brewer (31). 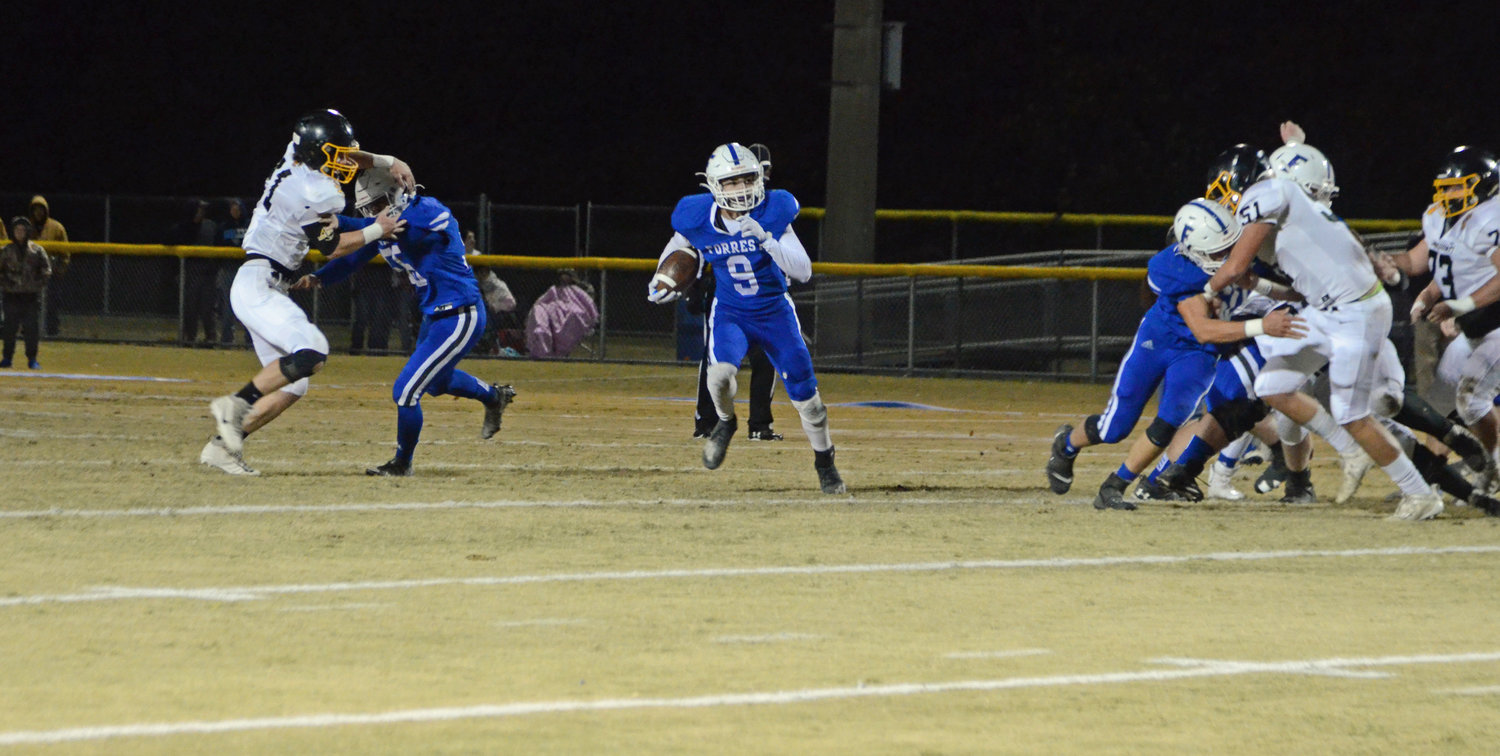 Brenton Burchell (9) makes his way through a big hole and a big pickup for the Rockets. 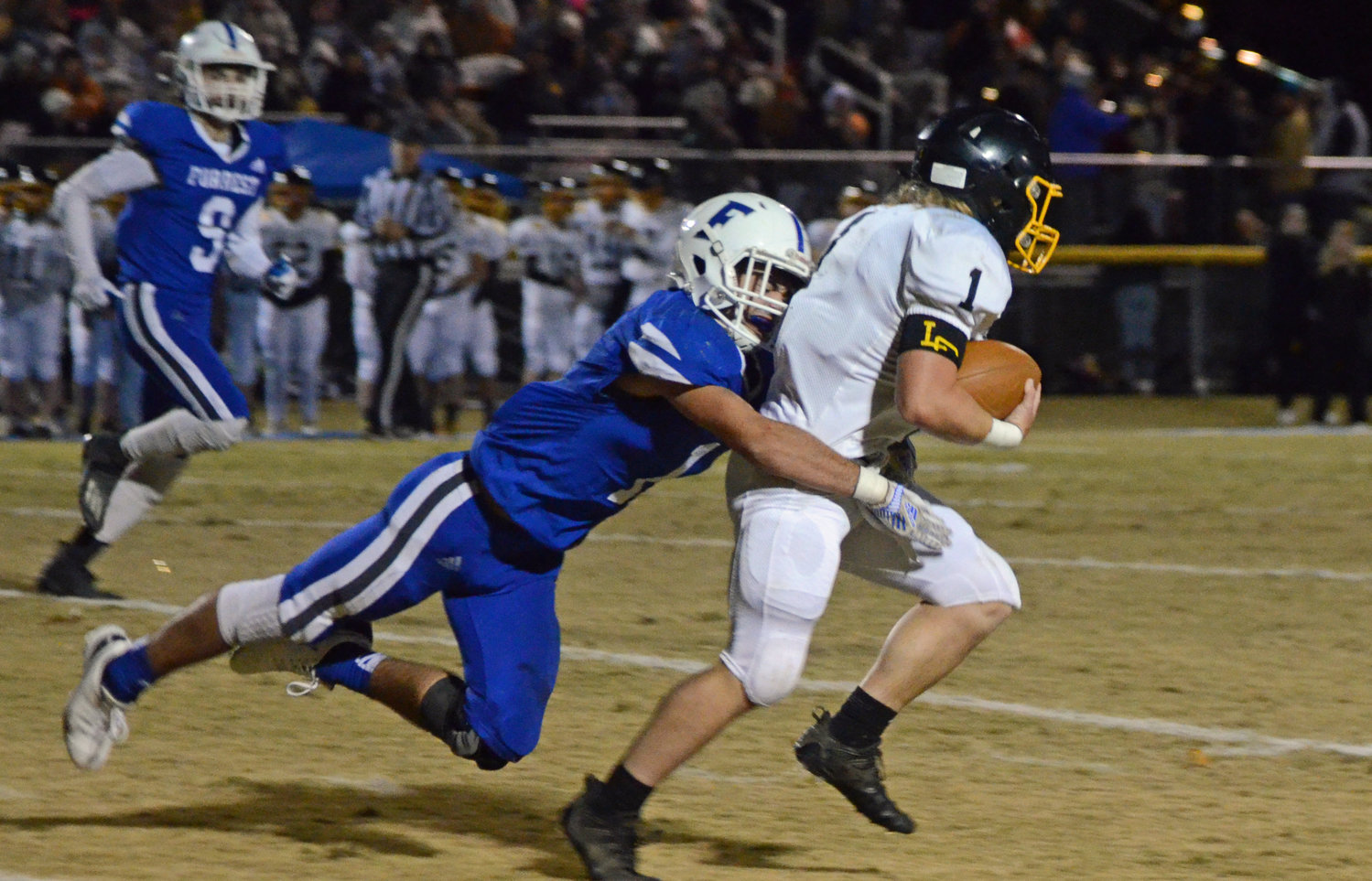 “We played our style of football,” Stephenson said. “We preached all week that this was going to be a physical game for four quarters and our kids answered the call.””
Forrest coach Eli Stephenson
By Anthony S. Puca Sports Writer

The two squads were region foes for four years until the most recent realignment and the Panthers had held a 3-1 advantage over that time span, including a 7-0 win last season that secured the region title for Lewis County in the final regular season game at Forrest.

It was the same margin of victory again, but this time it was the Rockets who prevailed 13-6 in an old-fashioned slugfest as the two teams combined for 78 rushing attempts in a contest that was affected more and more by the weather as the night moved on.

“It came down to the last play and our kids competed all night long,” Forrest coach Eli Stephenson said. “The guys got after it in the first half putting up some points on offense and our defense played well all night long….when you give up just six points that’s a heck of a job and I’m just really proud of the guys.”

The Rockets played shutdown defense, turnover-free football, and rushed for 249 yards in the game as Tayton Swift led the way with 74 yards on 13 carries.

Chris Davis rushed the ball 10 times for 65 yards, Brenton Burchell had nine carries for 41 yards, Hunter Bennett added 16 yards on seven runs, McCalister Wilson rushed the ball twice for six yards, and Carson Yates had one carry for one yard.

Inexplicably, none of Forrest’s points came in the ground game as two huge Gavin Grissom field goals and a 27-yard touchdown pitch and catch from Hunter Bennett to Brenton Burchell accounted for all 13 points for the home team.

“We played our style of football,” Stephenson said. “We preached all week that this was going to be a physical game for four quarters and our kids answered the call.”

“Our senior leadership up front does a heck of a job…Braden Bowyer, Layne Strasser, Brayden Jones, Colton Cashion…they get them going and it’s fun to watch them play.”

Grissom nailed a 45-yard field goal with nine minutes remaining in the first quarter and the Burchell/Bennett hookup came about six minutes later for an early 10-0 lead for Forrest.

“When Grissom nailed that kick, I thought it was one of the turning points of the game,” Stephenson said.

Meanwhile, the Forrest defense held the Panthers in check with a pair of three-and-outs in the first quarter and the first time Lewis County had the ball in the second quarter they fumbled it away and Bennett came up with the loose ball.

The senior quarterback proceeded to march the Rockets downfield, burning eight minutes off the clock on an 11-play drive that turned in to three more points on Grissom’s second field goal of the game with 1:23 remaining in the first half.

Forrest took the 13-0 lead to the locker room and the Panthers took the second half kickoff and then disaster struck when they coughed up ball on first down and the Rockets recovered the cold rock.

The Rockets could not turn the miscue in to points as Grissom’s third field goal try was no good with 7:38 remaining in the third quarter.

Lewis County got some offense going on its next series as they marched 78 yards to the Forrest 6-yard line where they were stopped on a fourth down play.

The sticks were brought in for a measurement and the Panthers came up inches short of the first down and the Rockets tool over with 1:52 remaining in the third quarter.

The Rockets went three-and-out, punting on the first play of the fourth quarter.

The Panthers had to score to stay in the ballgame and they responded with a quick, nine-play drive that ended on a Dyer Barnes 15-yard TD catch from freshman quarterback Bryson McDonald.

The extra point try was no good and the Rockets led 13-6 with 8:11 remaining in the contest.

Forrest stayed with the ground game, running the ball nine straight times and burning four minutes and 37 seconds off the clock before a 51-yard Grissom field goal try fell short of the crossbar with 3:34 left in the game.

The cold rain was falling harder and the Panthers managed to get one first down before they went backwards and a few incompletions later, Forrest had the ball in victory formation and they had the win to advance to the state quarterfinal round Friday night at Chapel Hill.

Forrest has never won a state quarterfinal game and the last time they played in one, it was Riverside that knocked out an unbeaten Rockets’ squad in a 20-15 win at Chapel Hill in 2019.

The Forrest defense has been superb the entire season, giving up just 6.9 points per game in its nine wins and they will have to turn in their best effort of the season this week as the Panthers come in averaging 35.8 points per game through 12 games.

“We gotta work on ourselves,” Stephenson said. “We have to be more worried about what we are doing other then what the other team is doing, so we are going to continue to follow that philosophy and we will be ready to play Friday night.”

The two squads have also met three other times in the playoffs with the Panthers winning in 2011 and 2014 while the Rockets’ lone win over Riverside came in a 23-20 first-round win at Chapel Hill in 2013.