CHAPEL HILL — The Forrest Rockets (3-5, 1-3) took a tough loss in their last home game of the season on Friday in a region matchup against the Richland Raiders (6-2, 3-1), the nail biter ending … 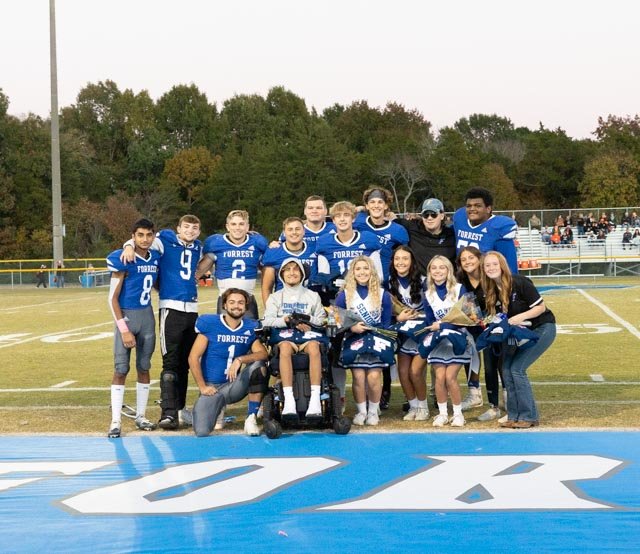 The Forrest football seniors were honored prior to kickoff on Senior Night.
Tribune Photo by Kacy Kincaid 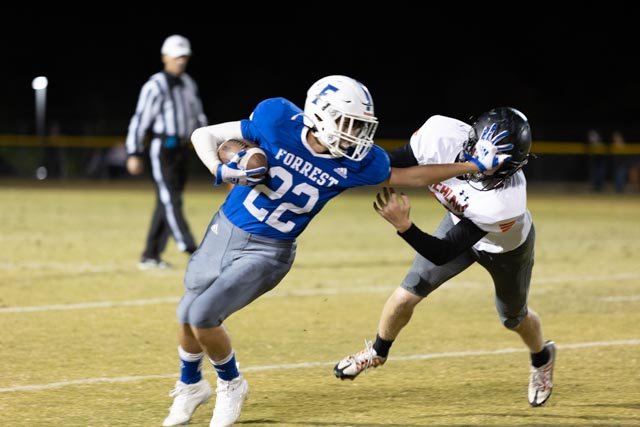 Eli Bell breaks the tackle on a carry.
Tribune Photo by Kacy Kincaid 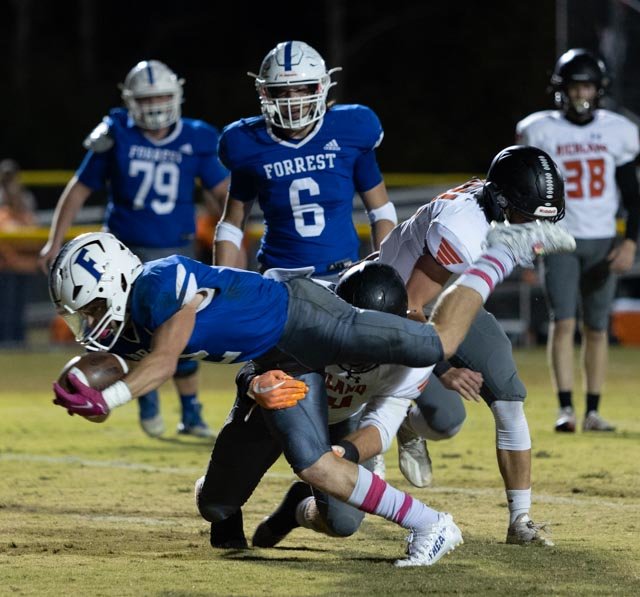 CHAPEL HILL — The Forrest Rockets (3-5, 1-3) took a tough loss in their last home game of the season on Friday in a region matchup against the Richland Raiders (6-2, 3-1), the nail biter ending in a score of 42-41.
Forrest started off hot, forcing the punt on Richland’s first possession.
Ryan Hill, Tayton Swift, and Liam Bell all pitched in on first-down runs, Hill ultimately crossing the goal line from the one to score the Rockets’ first touchdown of the game only three minutes in.
Like Groundhog Day, the Raiders were forced to punt on their next possession, allowing the Rockets to find the end zone for their second score of the night.
Eli Bell carried for 25 yards on the drive, while Swift, who led the Rockets with 111 yards, added 16.
It was Swift who dipped into the end zone from the four yard line with 4:51 left in the first quarter.
Gavin Grissom’s kick was good on both possessions, giving Forrest the 14-0 lead.
Within three minutes, the Raiders responded, scoring on a nine-play drive covering 80 yards.
The extra point attempt was no good.
After a failed field goal attempt for the Rockets and a punt by the Raiders, Forrest regained possession on their own 41-yard line.
With 5:45 left in the half, Hill connected with Chris Davis on a 34-yard touchdown pass. Grissom kept up the momentum and the Rockets held a sturdy lead, 21-6.
The Rockets defense tried to hold steady, but the Raiders kept trudging down the field, digging themselves out of third down holes. Ethan Workman, who was hard to handle all evening with a total of 194 yards, finally made it to the one yard line, where his second attempt of the drive to cross the goal line was successful. The Raiders came up short on the two-point conversion.
Going into halftime, Forrest held the lead at 21-12.
Swift started the third quarter for the Rockets with a kickoff return to the Raiders 49 yard line. Three plays in from the 41, Richland intercepted, but were unable to take advantage thanks to a big third down stop by Riley Durbin and Landon Groeneveld.
The Raiders did not remain silent. With 3:12 left in the third, Richland found the end zone again, edging closer to the lead, only down by two, 21-19.
In another unlucky turn of events for the Rockets, a fumble was recovered by the Raiders, which they expounded on in the form of another touchdown, taking the lead 26-21.
But the Rockets weren’t finished. With three seconds left to play in the third quarter, Hill launched a 40-yard touchdown pass to Swift, regaining the lead 28-26 heading into the fourth quarter.
And what a fourth quarter it was. Forty seconds in, Raiders quarterback Bryce Miller went on a 59-yard touchdown sprint, also tacking on the extra two, putting Richland up 34-28.
After E. Bell’s touchdown kickoff return was called back due to a penalty on the Rockets, Forrest started at their own 45 yard line. Swift moved the ball into Raiders territory, with Davis going on a 27-yard dash to put the Rockets on the nine yard line. Again, it was Swift who scampered across the goal line to even up the score 34-34. Grissom’s kick was good, giving the Rockets a one point lead with 8:35 to play.
Richland took their time moving the ball up the field. At the Rockets’ six yard line, a Raiders fumble was recovered by Forrest, but another penalty against the Rockets gave possession back to Richland. They pounced on the opportunity, scoring on the next play. Richland added the extra two on a pass to Workman, taking the lead 42-35.
A handful of Rockets came together to methodically maneuver the ball into Raiders territory, including a 27-yard pass reception by Grissom. Finally making it to the 11 yard line, Hill dashed into the end zone for the second time of the night, leaving the Raiders with only a one point lead.
Forrest went for it all, setting up for the two-point conversion. But it just wasn’t in the cards for the Rockets. The pass fell incomplete, and the Raiders took the win.
The Rockets are on the road this week with a Thursday night meeting with East Robertson (7-1). Kickoff is scheduled for 7pm.