Forrest to face Community for region title in rematch

CHAPEL HILL — After locking up the District 7-AA championship last week, Forrest coach Andy Burkett wanted his team to get a strong start in the Region 4-AA semifinals.What he got was a 20-1 …

Forrest to face Community for region title in rematch

Rocket first baseman Braden Bowyer gets set to lay the tag on a Stratford base runner for the out on a pick off attempt.
Tribune Photo by Chris Siers 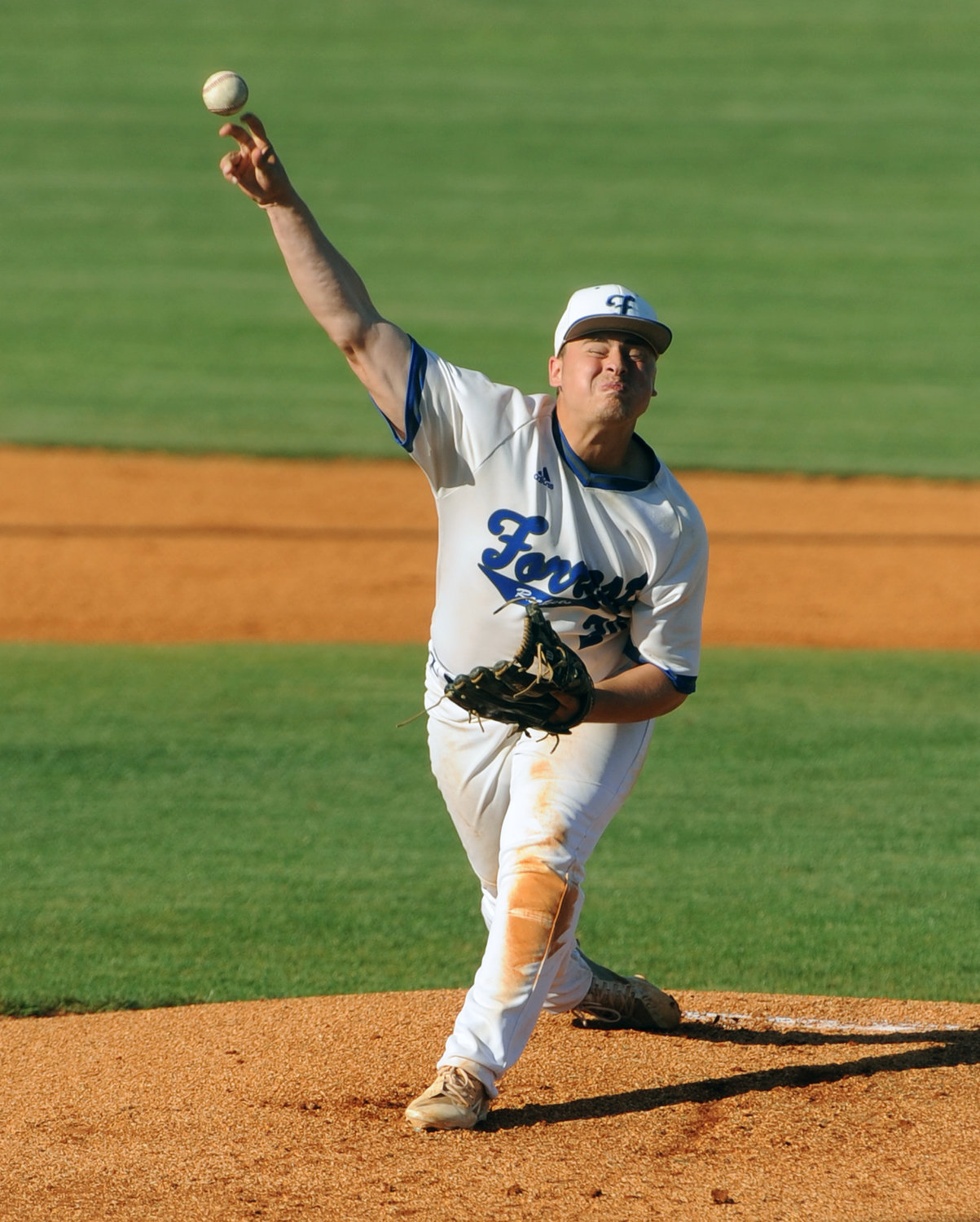 Forrest starter Riley Durbin was dominant in his outing against Stratford, striking out eight in three innings pitched.
Tribune Photo by Chris Siers 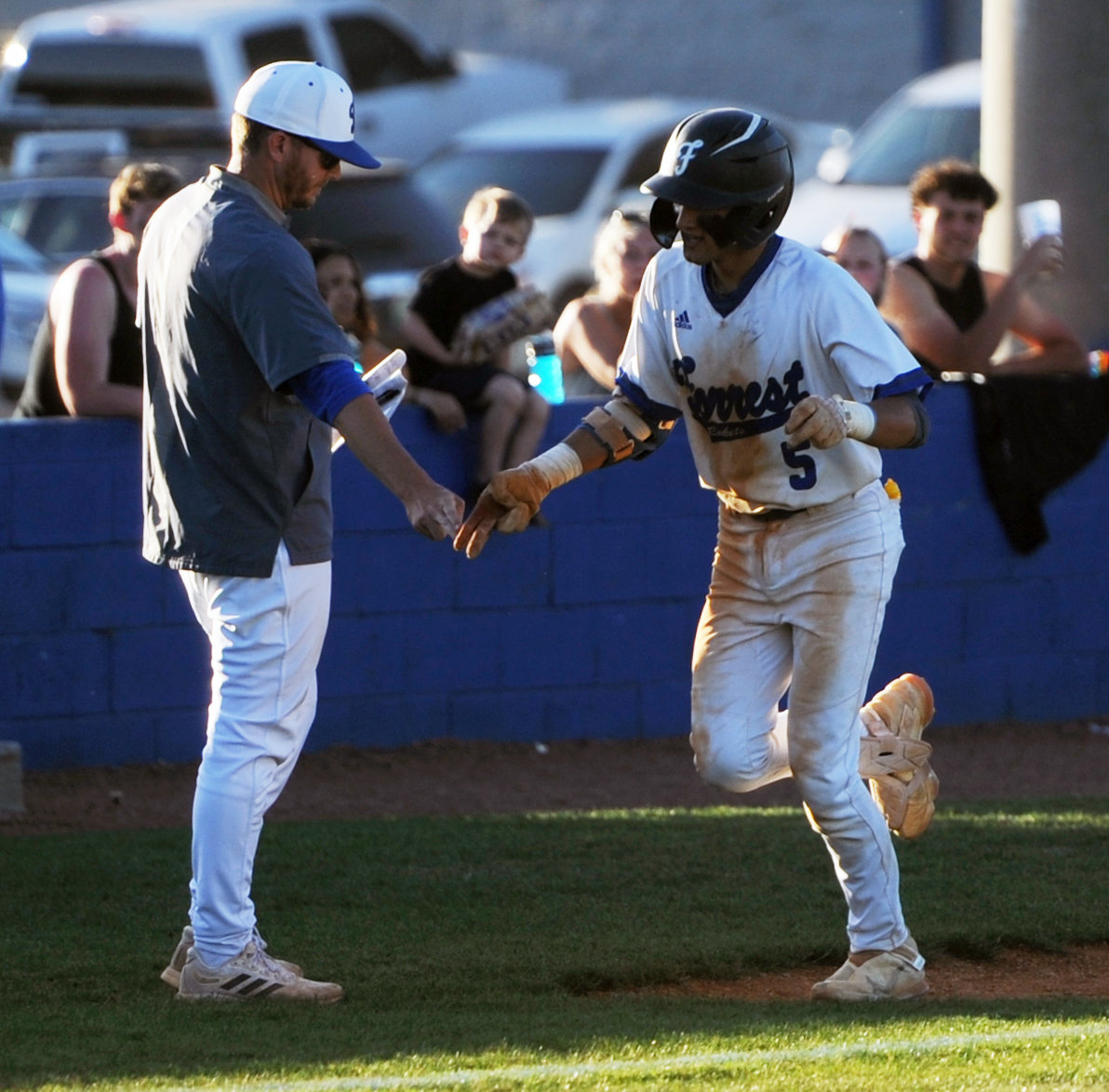 Rocket senior Camden Vaughn catches a fist bump from coach Andy Burkett after mashing a grand slam in the third inning against Stratford on Monday.
Tribune Photo by Chris Siers
Previous Next
Posted Monday, May 16, 2022 10:39 pm
By Chris Siers ~ sports@t-g.com

CHAPEL HILL — After locking up the District 7-AA championship last week, Forrest coach Andy Burkett wanted his team to get a strong start in the Region 4-AA semifinals.
What he got was a 20-1 blowout victory over Stratford that sent the Rockets to the region championship.
“ With the way the game unfolded, I was really happy with the guys and the way they were swinging the bats. They weren’t up there looking for walks. They went up there looking to put a drive into it. And some of the guys that got in the game, they played well too,” Burkett said.
Forrest dominated in every facet of Tuesday’s semifinal against the Spartans, with the Rockets hammering the Stratford pitching staff to the tune of 15 hits, highlighted by senior catcher Camden Vaughn’s third-inning grand slam.
Braden Bowyer also homered for the Rockets in eight-run first inning as well.
Forrest also collected five doubles in the win.
Forrest jumped on the Spartans with an eight-run first inning, and followed with a five-run second and a seven-run third.
District 7-AA MVP Riley Durbin got the start on the bump and aside from a lead off walk in the second inning, allowed just one base runner in his three innings.
And the one base runner Stratford managed against him was picked off at first base.
Durbin was nearly-perfect, striking out eight in his three innings and giving up just the one walk.
After the Rockets built a 20-0 lead after the third inning, the Spartans collected a bloop single and a run off a Forrest error in the top of the fourth off middle-reliever Shawn Brown.
But Brown pitched around the trouble and stranded three on base.
Kain Moses put a cap on the semifinal with a flawless fifth inning, sitting the Spartans down in order with a pair of strikeouts.
“It’s awesome to see and know we have depth like that and to know that our team came in and ready to play.
It’s a different mentality. You can definitely tell with the way the guys were. I saw them at school today and they were incredibly focused. I think that focus is going to be crucial for us moving forward,” Burkett said.
Monday’s win over the Spartans was the 12th in the last 13 games for the Rockets and not only advances Forrest to Wednesday’s region finals, but also guarantees a state sectional berth as well.
But for now, the Rockets’ attention turns to an all-too-familiar foe—Community.
The Vikings, who Forrest owns a 5-0 record this season, including a 9-8 win in the District 7-AA championship, also won in a massive blowout in the other Region 4-AA semifinal, beating East Nashville 17-2.
“We know we’re going to have a battle with them. We may have to change up a few things as far as game plan and strategy is concerned. For us, we have to clean up the game against them a little bit. We can’t have a situation where we’re making the errors that we made last game because eventually that will get us. We definitely don’t want that to happen in the region championship game of all things,” Burkett said.
For now, the Rockets will hit the field on Tuesday to fine tune a few things before welcoming the Vikings back to Chapel Hill for Wednesday’s region championship.
“We’re going to get our focus back at practice tomorrow and be sure we handle things defensively, and stay aggressive in the box. If we do that, in conjunction with throwing strikes, I think we’re going to be successful,” Burkett said.