The Forrest Rockets had lost three games in a row coming in to Thursday’s senior night matchup versus Fayetteville at Chapel Hill, but they turned in a solid performance that was capped off by some … 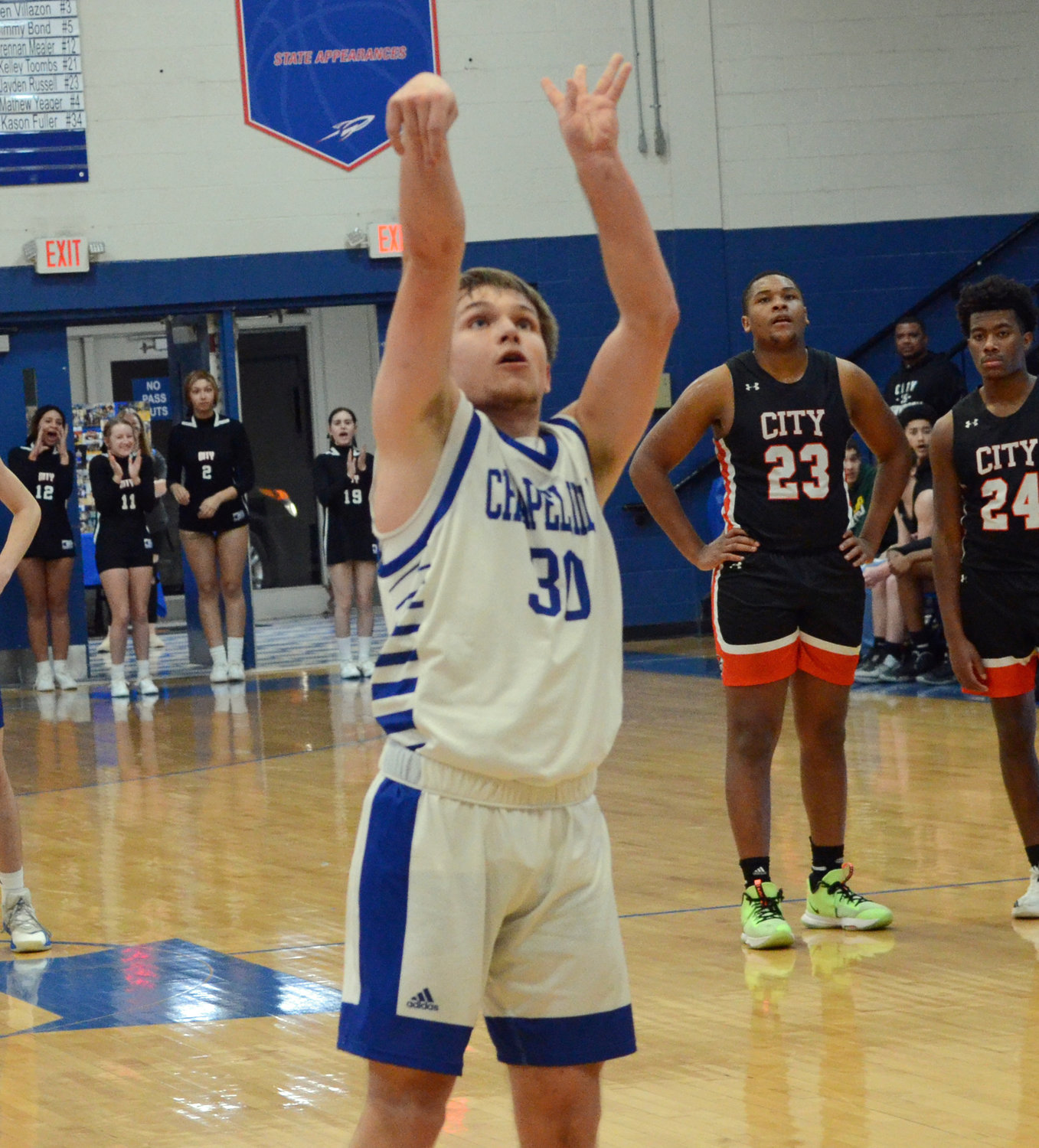 Forrest senior Andrew Timmons nails the second of two free throws to put the Rockets in front 51-50 with 7.2 seconds remaining in the game Thursday versus Fayetteville.
Tribune photos by Anthony S. Puca 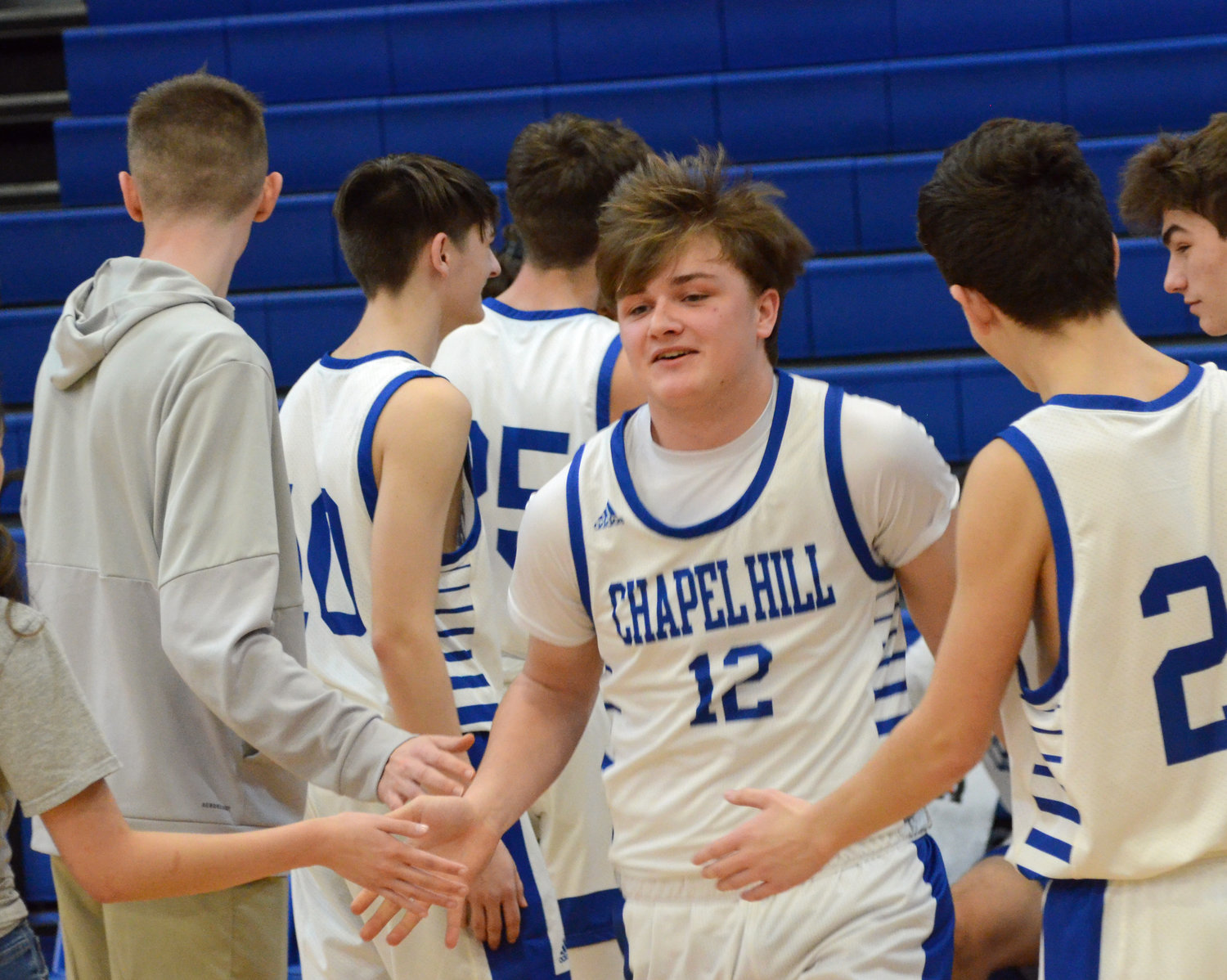 Brennan Mealer runs out for the Rockets for the senior night game versus the Fayetteville Tigers. 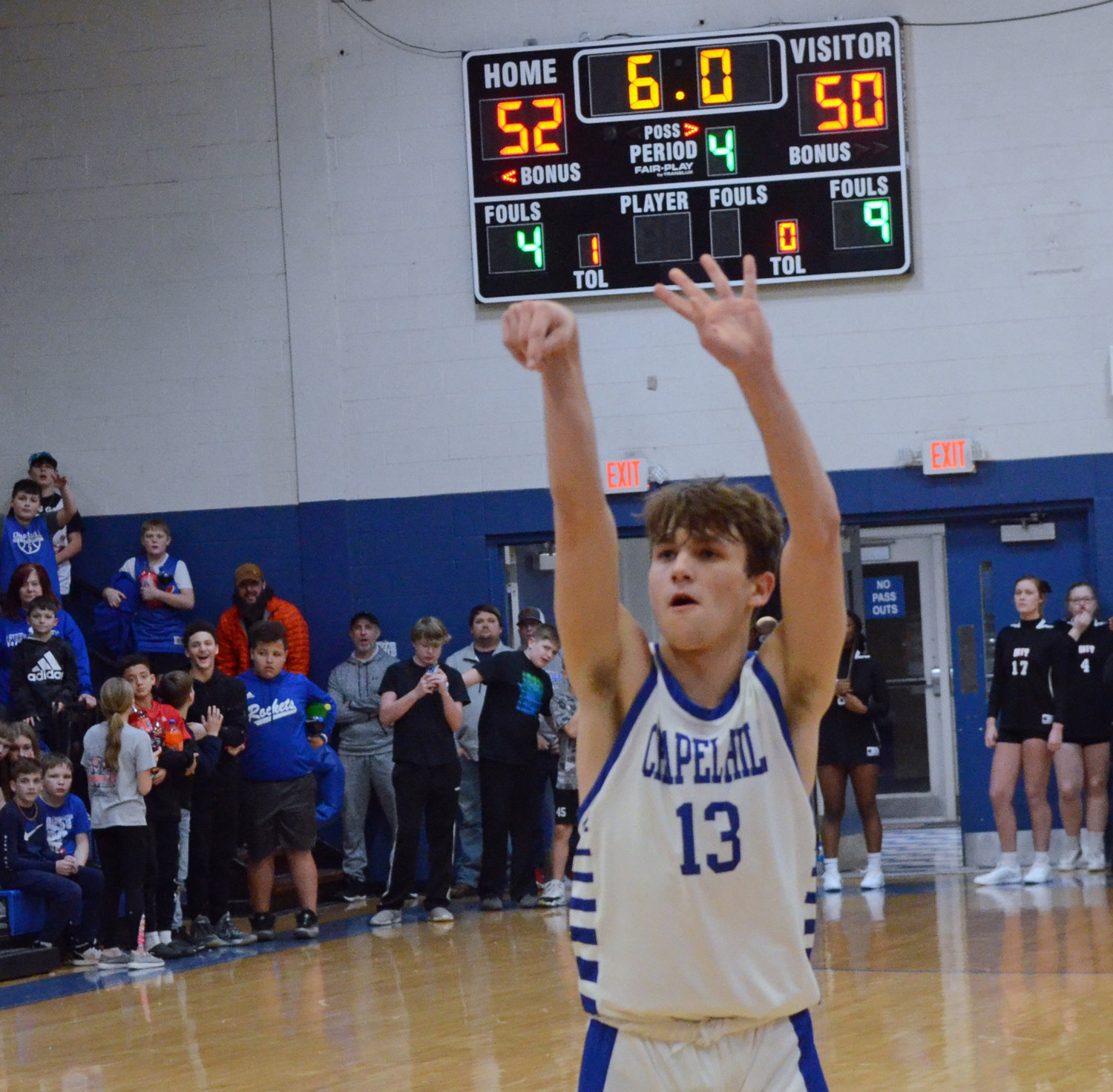 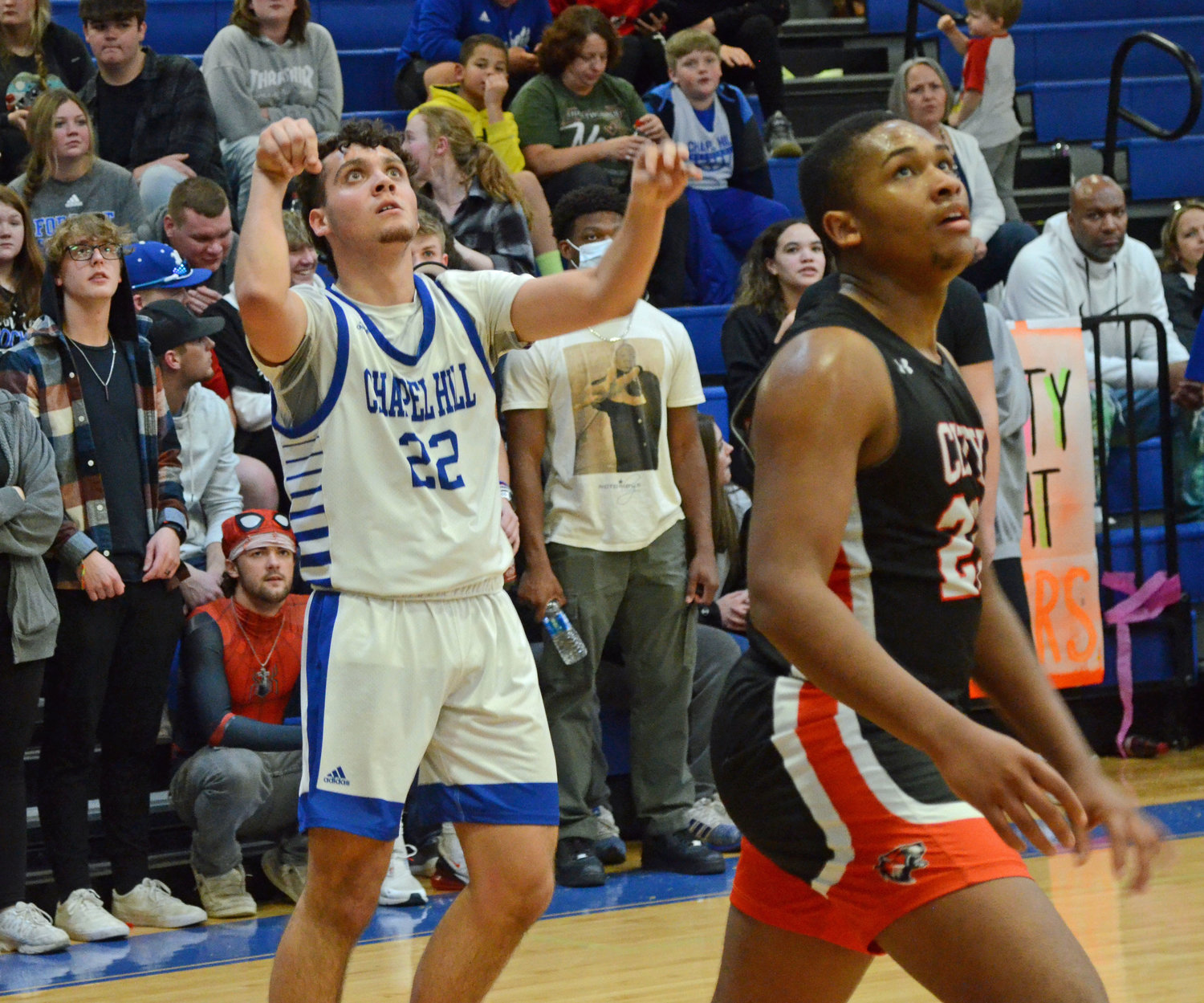 Davin Porter (22) connects on a mid-range jumper in the third quarter. 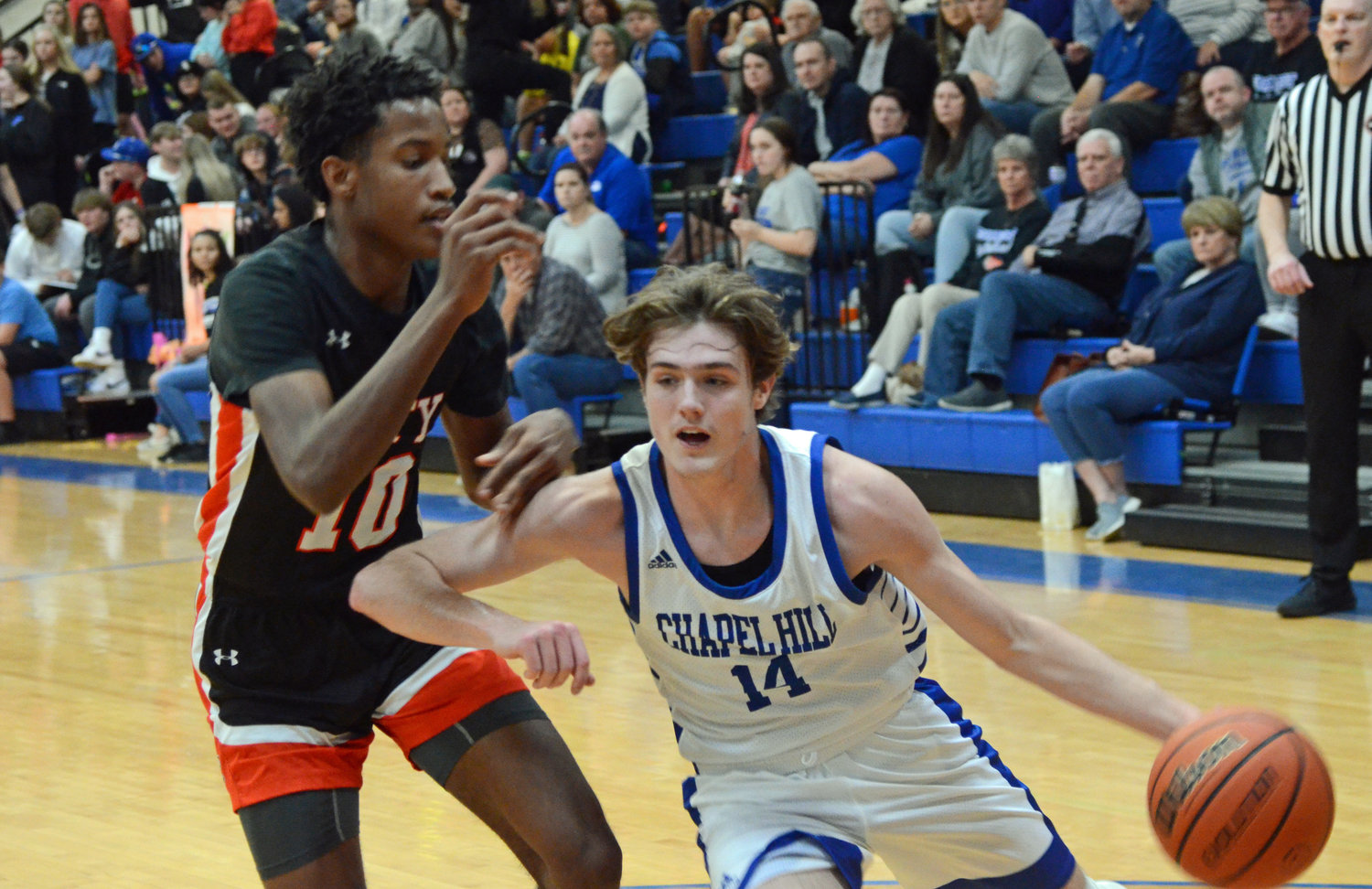 Senior Hunter Bennett (14) drives to the basket for two of his 15 points versus the Tigers.
Previous Next
Posted Thursday, February 17, 2022 7:44 am
By Anthony S. Puca Sports Writer

The Forrest Rockets had lost three games in a row coming in to Thursday’s senior night matchup versus Fayetteville at Chapel Hill, but they turned in a solid performance that was capped off by some clutch free throws by seniors Andrew Timmons and Deason Jones in the final seconds that secured a 53-50 win.

The three Forrest seniors led the way as Timmons and Hunter Bennett tied for game-high scoring honors with 15 points apiece and Jones was also in double figures with 14 points.

Timmons also had a pair of 3-pointers while Bennett and Jones canned one long bomb apiece, but the difference in the game was the free throw shooting as the Rockets went 9-for-11 while the Tigers made just 5-of-11.

Timmons went 2-for-4, Jones went 3-for-3, and Bennett made both charity shots he attempted.

Bryson Johnson scored for Fayetteville before Timmons nailed a 3-pointer to make it 10-4, but the Tigers roared back with an 8-0 run to take a 12-10 lead with 1:20 remaining in the opening period.

Bennett tied the game and after a Fayetteville turnover, Bennett scored on a drive to the hoop and was fouled.

The senior canned the free throw and the Rockets took a 15-12 lead to the second period.

It was nip and tuck the entire stanza as neither squad pulled away with the biggest lead at three points midway through, but the Tigers surged late and took a 29-28 lead on a Brayden Hockett 3-pointer to the locker room.

Fayetteville began to pull away as they went on an 8-0 run to open the second half and led 36-28.

The two squads exchange buckets before Forrest got a huge lift from Davin Porter, who scored four straight and Jones made it six points in a row to cut the Fayetteville lead to 38-36 with three minutes remaining in the stanza.

The Tigers took 40-38 lead to what would be a wild fourth quarter.

The Rockets scored the first six points to take a 44-40 lead before Fayetteville came back to lead 48-46 with 2:05 remaining in the contest.

Timmons nailed a 3-pointer to put Forrest in front, but Johnson answered with a bucket for the Tigers and with 37.2 second left, Timmons was fouled and went to the free throw for a one-and-one.

Timmons missed the first shot and there was a scramble for the rebound that Timmons somehow came up with and on the grab, Fayetteville committed an intentional foul, putting Timmons on the line and giving Forrest possession after the free throws.

Timmons calmly nailed both charity shots and on the ensuing inbounds play, Jones was fouled with six seconds remaining in the game.

The senior drilled both shots and the Tigers could not get a good shot off at the end of the game as the Rockets survived with the three-point win.

Forrest and Grundy County play in the consolation game on Friday and both teams will be on the road for the opening round of the Region 4-AA Tournament next week.