A classic tale of redemption and revolution takes to the stage this weekend in Lewisburg, as a new theater company featuring local teens presents “Les Miserables.”

One of the most successful … 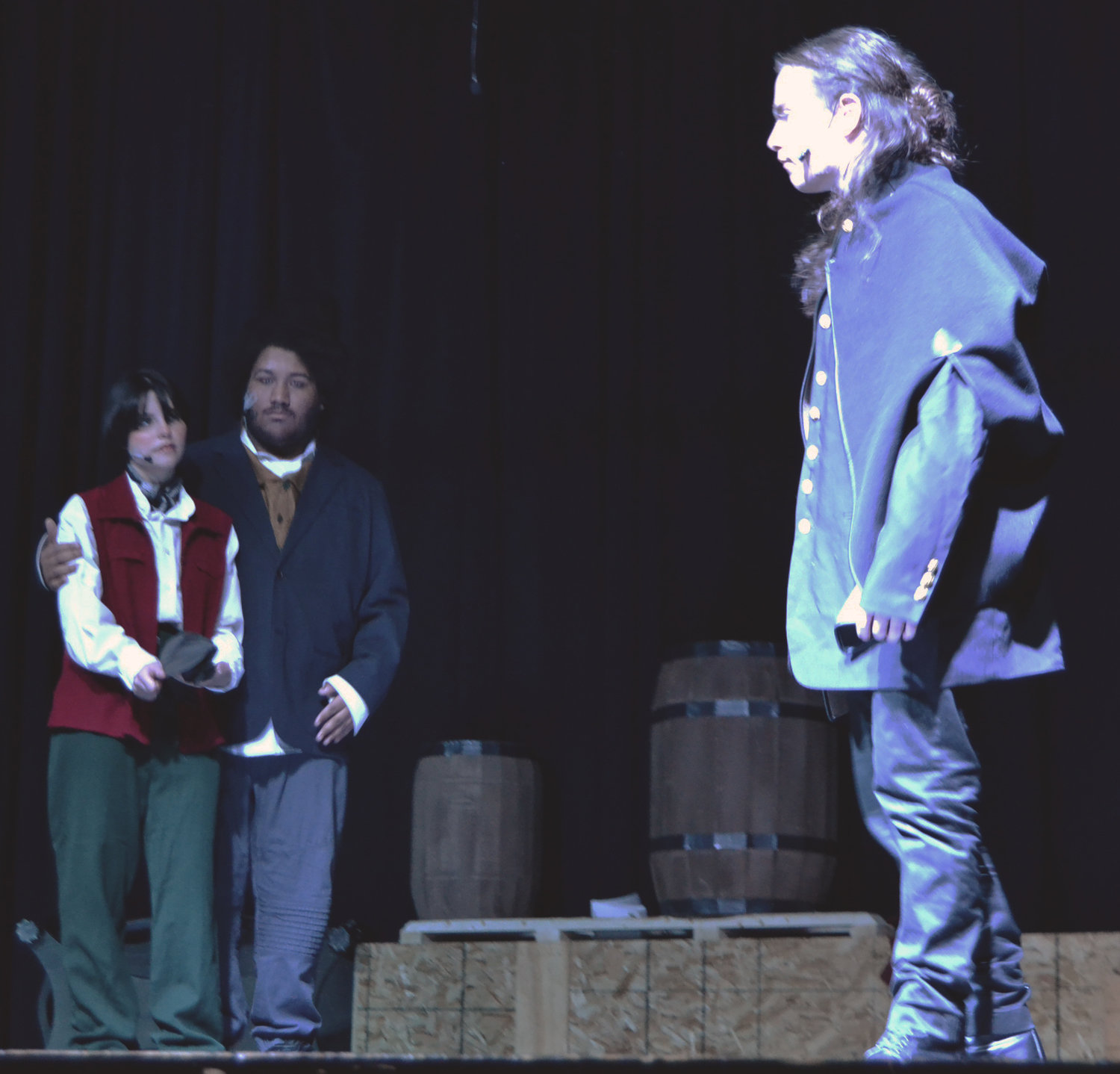 “Les Miserables” is coming to Lewisburg Middle School for three shows, opening Friday at 7 p.m. The classic musical, one of the longest running shows in theater history, is a first production from the Ouroboros Theater Collective and has been staged completely by local teens. Based on the Victor Hugo novel, the story follows Jean Valjean in his quest for redemption in 19th century France. Valjean, played by Fletcher Pinkerton (center) helps young revolutionary Marius, played by Al Dunaway (left), escape from the chaos of 1832 Paris and the unyielding Inspector Javert, played by Henry Pearson (right).
Tribune photo by Scott Pearson
Posted Thursday, January 20, 2022 12:05 pm
By Scott Pearson Associate Editor

A classic tale of redemption and revolution takes to the stage this weekend in Lewisburg, as a new theater company featuring local teens presents “Les Miserables.”

One of the most successful musicals in history, based on Victor Hugo’s classic 1862 novel, the original London production ran from 1985 until 2019 and the Broadway production ran for almost 7,000 performances.

Numerous revivals, touring companies, and anniversary specials have followed, along with the movie adaptation of the musical in 2012, which starred Hugh Jackman as Valjean and Russell Crowe as Javert.

An ambitious choice for a first production certainly, but 15-year-old director Volt Ouroboros said that was a deliberate choice.

“Everyone knows Les Miz, everyone enjoys it, and the music is great,” they said. “If we were only going to do one show, this should be the one.”

The production marks the first for the Ouroboros Theater Collective, a group founded to bring additional opportunities in theater for local teens.

“We’ve just given them the opportunity and space to do theater,” said advisor Rob Dalton.

“They’ve designed this whole show,” he added. “Literally they’ve done it all.”

And the cast and crew have done a great deal.

The student edition, which requires all performers to be 18 or under, trims verses from some songs to shorten the overall running time but otherwise offers the full spectacle of the original production.

Impressively, most of the relatively small cast play several characters or ensemble roles in order to bring off the historical sweep and grandeur of the stage production.

Fletcher Pinkerton plays the role of Jean Valjean, released after years in prison for stealing bread and facing a choice on which path his life will take.

Ruti Ouroboros plays the bishop who gives Valjean a new lease on life and later plays Gavroche, the street urchin at the barricades.

Cadence Goosby plays Fantine, a young woman with a daughter, Cosette, who Valjean swears to protect when Fantine is on her deathbed.

Wyatt Newman and Amya Edmonson play Thenardier and Madame Thenardier, an opportunistic and unscrupulous couple whose paths cross with Valjean throughout the years of the musical. Valjean pays the Thenardiers to adopt the young Cosette, played by Skylar Goosby.

Years later as revolution, the adult Cosette, played by Ryan Farley, and the Thenardier’s daughter Eponine, played by Sunni Thomas, find themselves both loving the idealistic young revolutionary Marius, played by Al Dunaway.

As the 1832 Paris Uprising approaches, most of the characters are drawn to the barricades for the musical’s final acts.

Sarah Parker plays Enjoiras, the leader of the student rebels, joined by Arianna Vinson as Combeferre, Connor Dunkleman as Joly, Mandy Isham as Grantaire, and Danisha Mitchell as Courfeyrac.

“I’m genuinely really proud of (the cast),” said Ouroboros. “They’ve worked really hard on this and I cannot wait for people to see it.”

The musical will be presented on Friday and Saturday at 7 p.m. and on Sunday at 1:30 p.m. in the auditorium of Lewisburg Middle School.

Tickets will be available at the door for $10.