A lengthy rain delay did not dampen the spirits of the defending back-to-back state champion Forrest Lady Rockets, who easily handled Adamsville 8-1 in a second round Spring Fling XIX Class 2A … 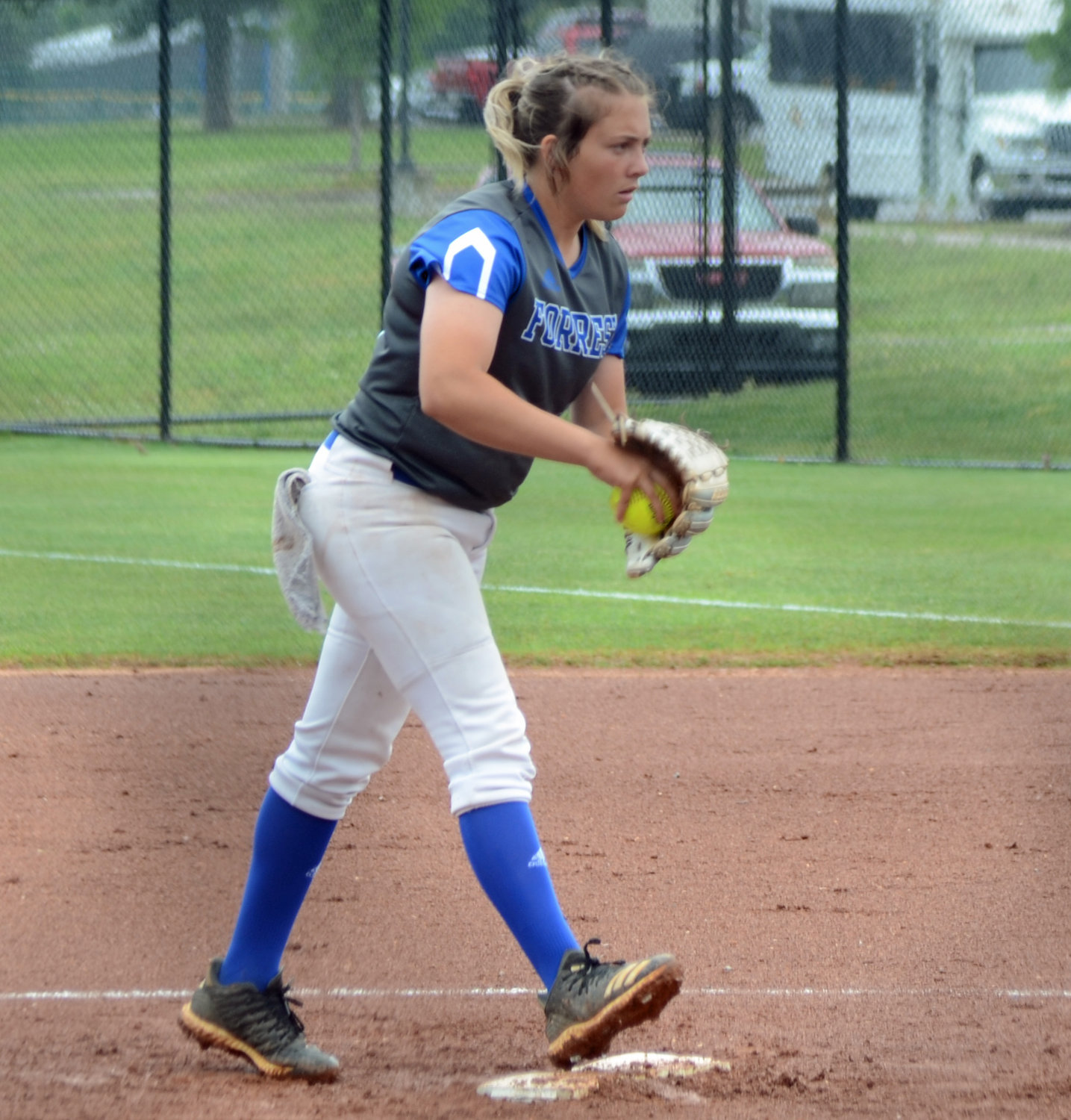 Julie Williams came back in a big way in Wednesday’s winner bracket contest versus Adamsville as the junior picked up a three-hit, complete game win in the circle.
Tribune photos by Anthony S. Puca 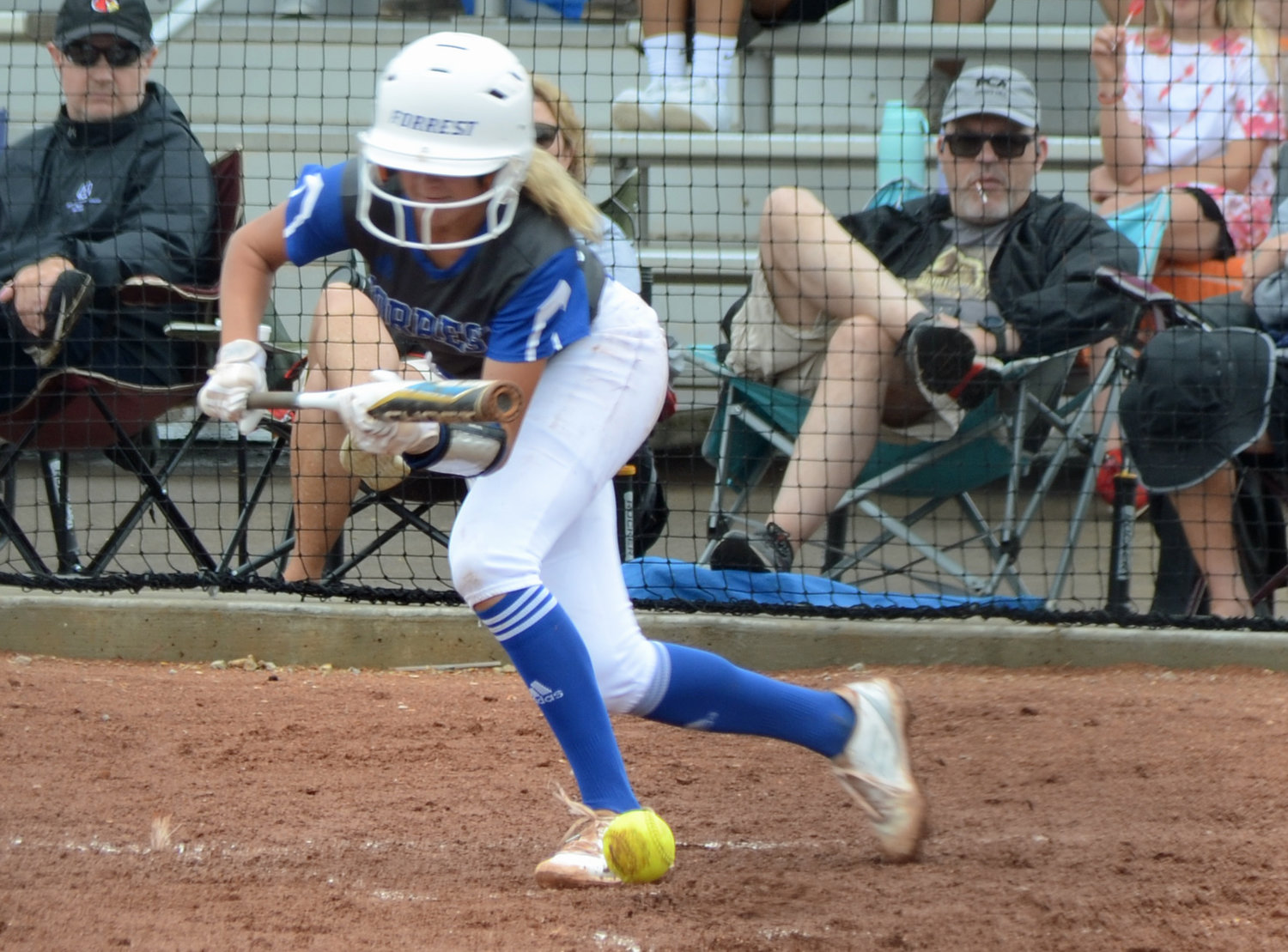 Macyn Kirby continued as the master table setter for the Lady Rockets, going 4-for-5 with three runs scored. 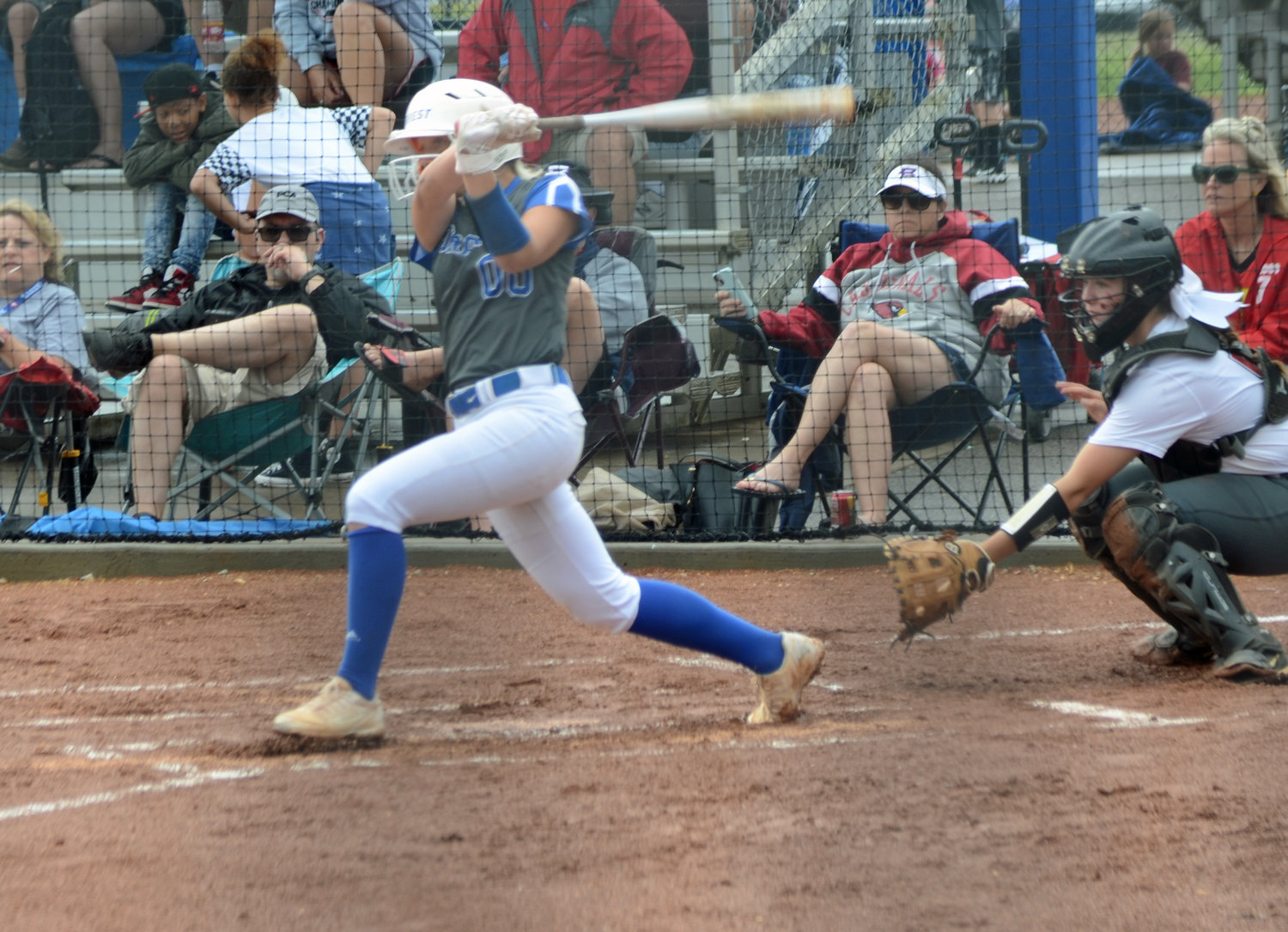 Abby Ferguson swung a hot bat versus the Lady Cardinals with three hits and five RBIs. 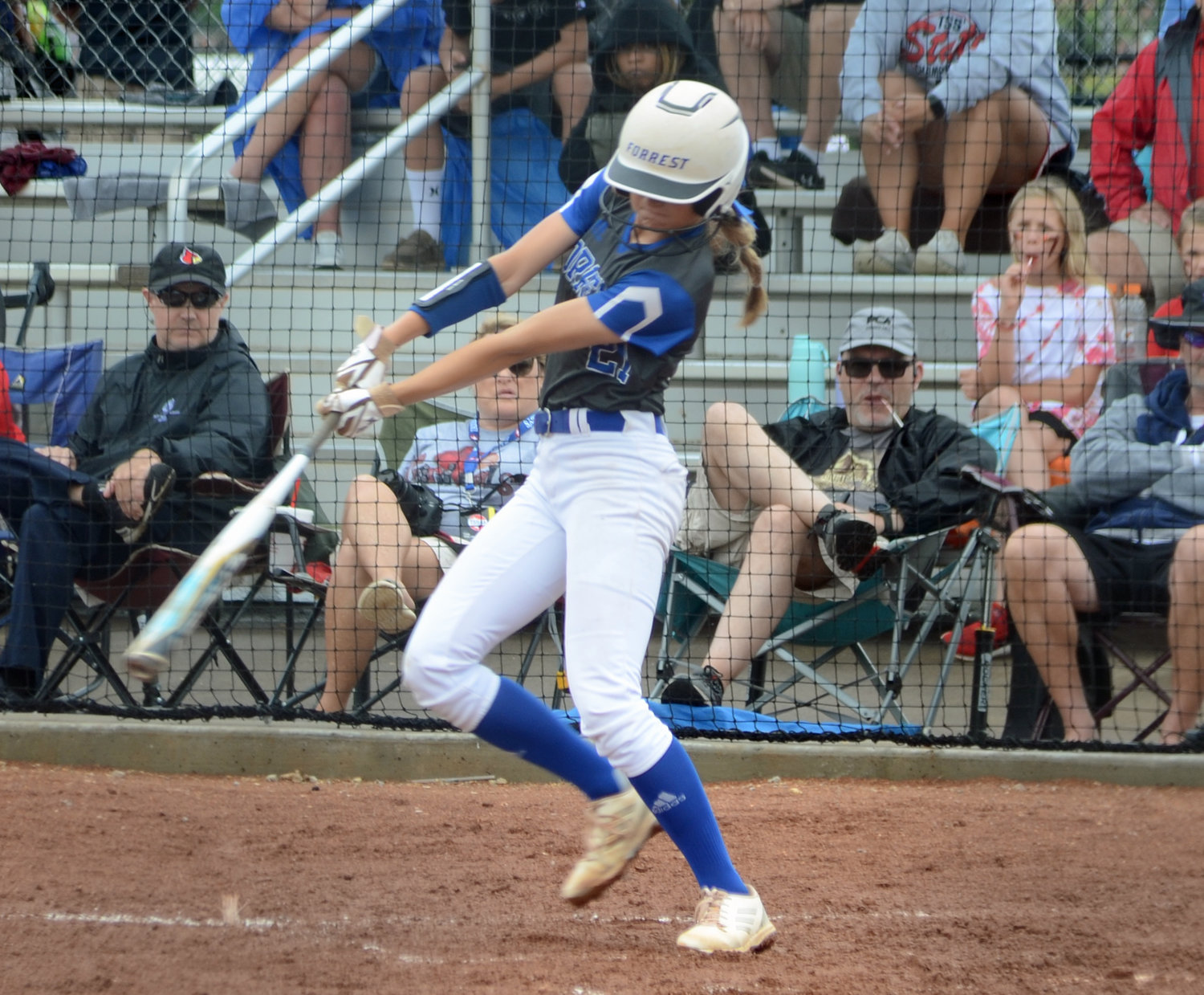 Maggie Daughrity had two hits, drove home one run, scored a run, and stole base. 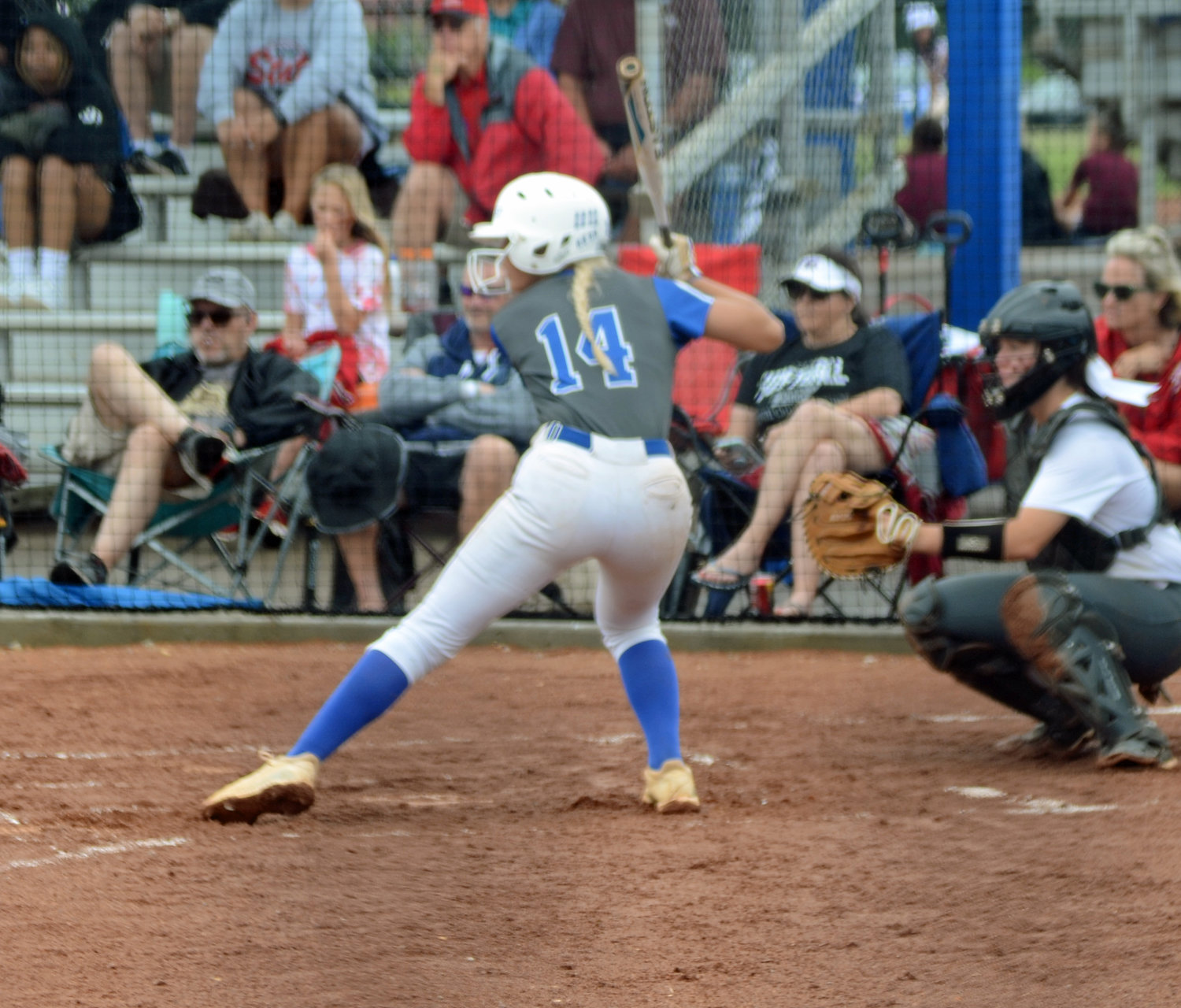 Briley Burnham, who has been on a roll at Murfreesboro, had one hit and scored a pair of runs while driving in the game’s first run in the fourth inning on a perfectly executed squeeze bunt. 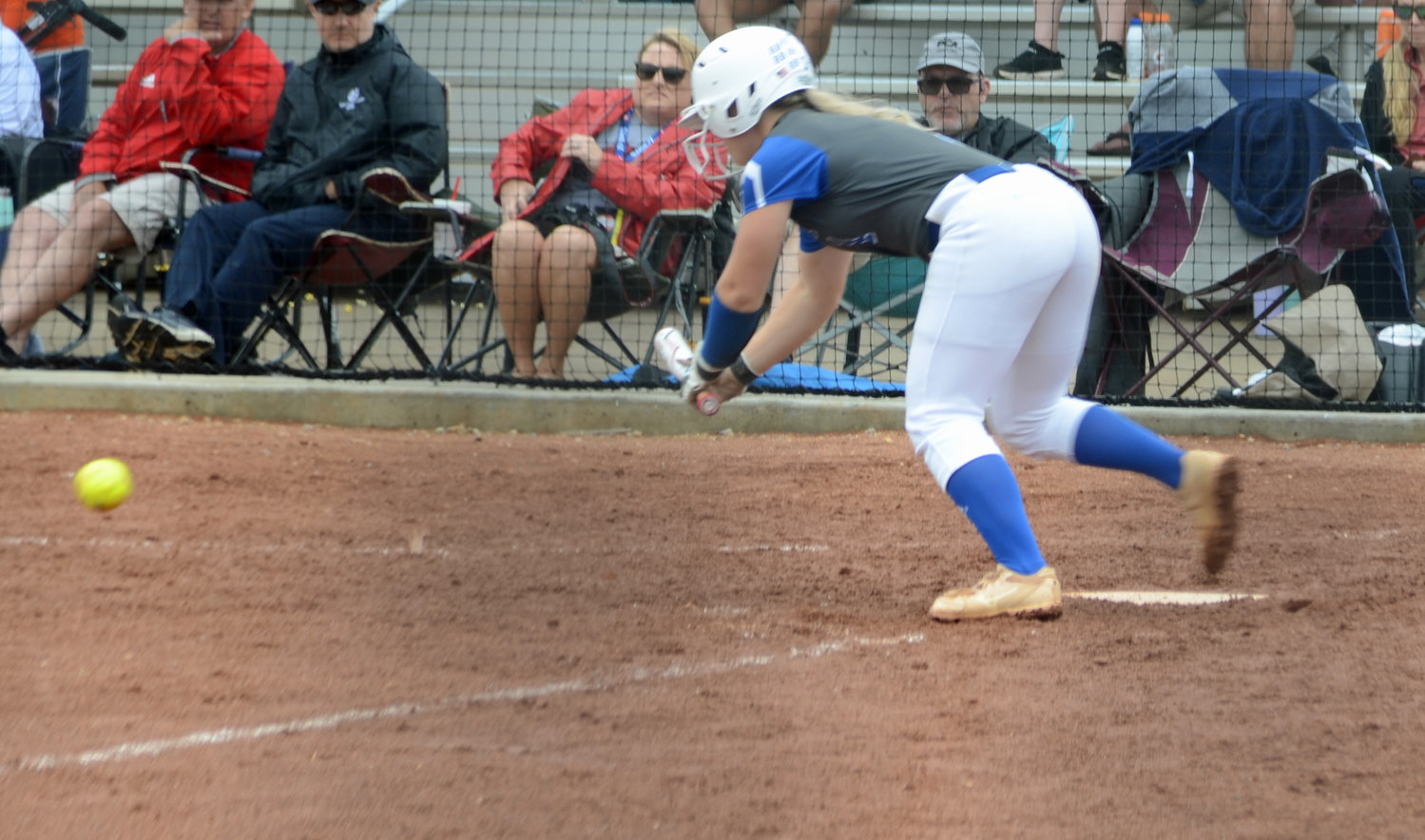 Christa Warren gets down the sacrifice bunt versus the Lady Cardinals.
Previous Next
Posted Thursday, May 26, 2022 7:22 am

A lengthy rain delay did not dampen the spirits of the defending back-to-back state champion Forrest Lady Rockets, who easily handled Adamsville 8-1 in a second round Spring Fling XIX Class 2A winner’s bracket contest at McKnight Field in Murfreesboro Wednesday afternoon.

“I think the rain delay actually gave them some time to decompress,” Forrest coach Shelby Lightfoot said. “I was really proud of them, when we said it was time to go they just went out and played ball, so they did great with it.”

Forrest (28-10) is on a nine-game winning streak and has won 14 out of its last 15 ballgames with the only loss coming in a close 5-4 setback at intra-county rival Marshall County on May 3.

Julie Williams came back from a rough start on Tuesday, turning in a complete game three-hit, four strikeout, and one walk gem in the circle versus the Lady Cardinals.

“Julie had a great game today,” Lightfoot said. “That was big, she gave us a chance to win and a chance for our offense to get going.”

Adamsville’s only score was unearned in the fourth inning.

The only time Williams was really in any trouble was the bottom of the first inning as Adamsville had two runners on with one out, but the junior hurler came up with a strikeout and a grounder to first base to squash the threat.

Williams also had three 1-2-3 innings, including the last inning.

On offense, Forrest pounded out 13 hits with Macyn Kirby leading the way with a 4-for-5 performance at the plate with three runs scored.

Abby Ferguson also swung a lethal bat, going 3-for-5 with five RBIs and Maggie Daughrity went 2-for-3 with an RBI, a run scored, and a stolen base.

“We really need that middle and that top part of our lineup to get going, honestly I felt it’s been a little bit late,” Lightfoot said. “Briley’s been hot, Maggie’s been hot, and we have been doing some things down there, so when I say successful for them I’m thinking 2-for-3 and 3-for-4. That’s kind of the numbers I expect and they expect, so when they bring up those numbers we run the score up and do well.”

Addie Bunty, Leslie Bartoli, Carli Warner, and Briley Burnham all had one hit apiece for Forrest with Burnham scoring twice and driving in a run.

In the top of the second inning, Burnham drove home the game’s first run on a squeeze bunt RBI and Daughrity made it 2-0 with a run scoring single.

Ferguson knocked in two runs in the top of the fourth inning to make it 4-0 before a pair of Forrest fielding errors led to an RBI double by Morgan Palmer in the home half of the frame to make it 4-1.

Christa Warren walked with the bases loaded and Ferguson knocked in two more runs in the fifth inning as Forrest stretched the lead to 7-1.

Ferguson sent Daughrity to the plate with run number eight in the top of the seventh before Williams set down the Lady Cardinals 1-2-3 in the home half of the frame to secure the win and send the Lady Rockets to the winner’s bracket final versus Alcoa tonight at 5:30 p.m.

“We don’t know much about Alcoa, we have been all playing at the same time so there has been no scouting,” Lightfoot said. “I saw a few pitches from their pitcher the other day and it looks like she throws pretty hard, so we just have to come out and play ball.”

The winner of that game will be in the driver’s seat and will have to be beaten in two championship games.

“We are going to keep the same mindset, keep it day by day, pitch by pitch and breath by breath at this point,” Lightfoot said. “Of course you want to win so you have to get beat twice. Three games in a row on any pitching is a lot, so just finding a way to win and it doesn’t have to be pretty. Not everybody has to have their best night, if we can just have a few people have a good night and get a few runs across I think we will be in good shape.”

Alcoa (14-11) beat Community 4-0 in the other winner’s bracket game on Wednesday and the inclement weather has left two loser’s bracket games unfinished with Community trailing Loretto 6-5 in the fourth inning and Summertown leads Adamsville 3-0 in the fifth inning.