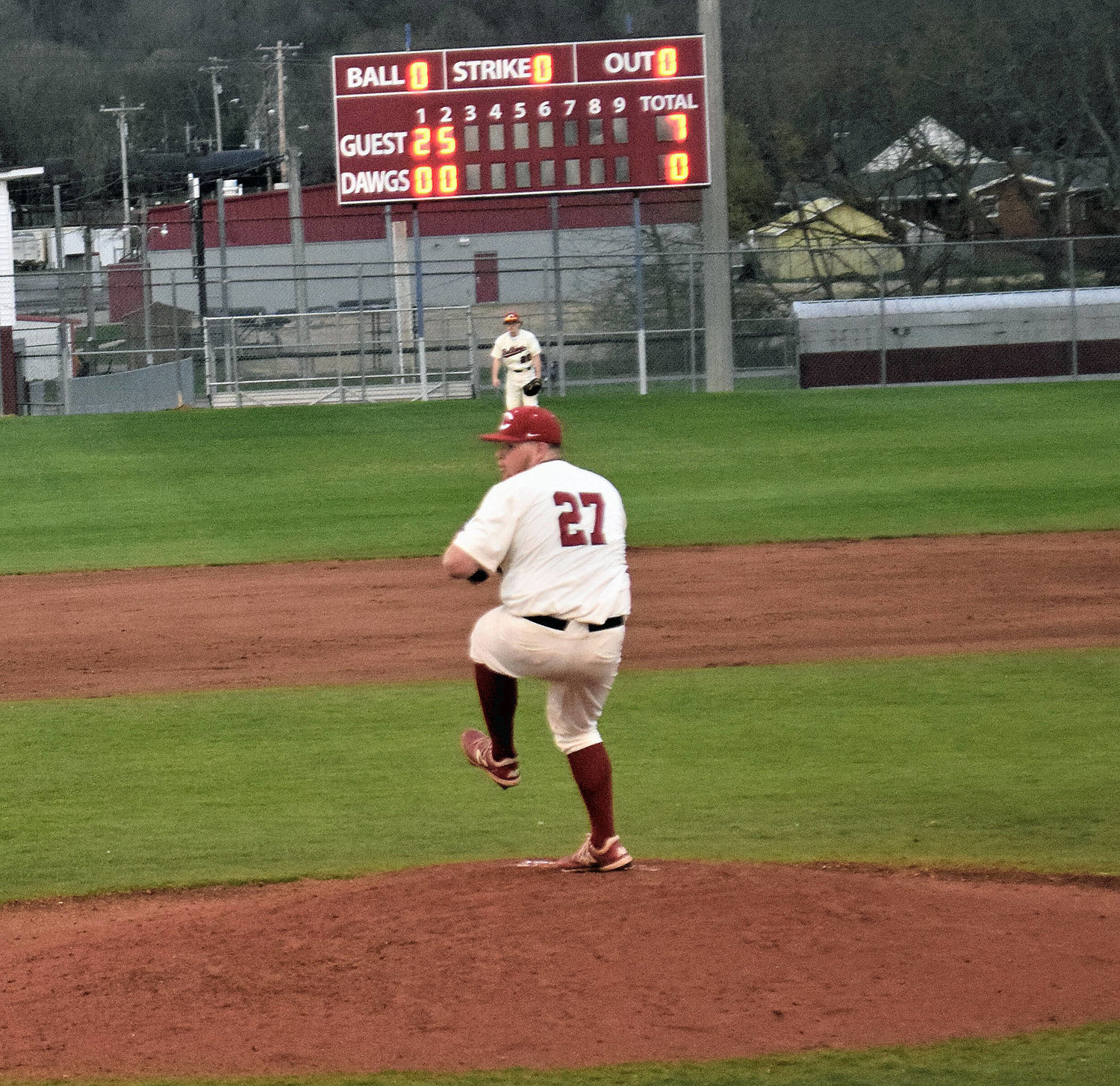 Logan Courtemanche (27) started on the mound for the Bulldogs, who are in the midst of an early season losing streak.
Tribune photo by Dennis Holley
Posted Wednesday, March 24, 2021 11:00 pm
By Dennis Holley Tribune Correspondent

The Cornersville Bulldogs, after being blanked 10-0 Monday night at Moore County, hosted the Raiders in Cornersville on a cold and windy Tuesday evening in a District 4-A contest.

The Raiders once again proved to be loaded with firepower as they pounded the Bulldogs 15-0 in a five-inning, mercy rule win to complete the regular season sweep.

Logan Courtemanche absorbed the loss on the hill and Luke Terry, Courtemanche, and Riley Gillit were the sole Bulldogs to get hits off Raiders’ pitcher Jacob Baker.

Ryder Morey led off for the Raiders in the top of the first inning and reached base after being hit by a Courtemanche pitch.

Kyler Parker doubled to center and the Raiders had runners at second and third base for Gage Burt, who came up with a fielder’s choice RBI to second base that scored Morey.

A sacrifice fly by catcher Chris Martin scored Parker and the Raiders led 2-0 before the Bulldogs came to bat.

Terry singled sharply in the hole with one out to left field and one out later, Courtemanche moved Terry to third base on a perfectly executed hit-and-run to right/center field.

Terry and Courtemanche were stranded though as Baker bore down to strike out Wesley Pigg for the third out.

The top of the second saw the Raiders explode for five runs as Keller Morey led off for Moore County with a base hit.

Will Harder moved Morey to third on a fielder’s choice and Baker brought him home with a base hit to make the score 3-0.

Ryder Morey scored on a Bulldogs’ error and Morey went second and then third base before scoring on a sacrifice to make the score 5-0.

Burt got aboard on another Bulldog error and Chris Martin followed with a blast that easily cleared the centerfield fence and MC was on top 7-0.

Baker continued his pitching dominance as he mowed down the Bulldog batters.

The top of the fifth inning saw the Raiders pour on the runs as they sent 11 batters to the plate, scoring eight times in the 15-0 final.