The Forrest Rockets came in to Tuesday night’s game riding a five-game winning streak, including a 54-38 win at Moore County on December 3.

The Raiders got their revenge on the Rockets as they … 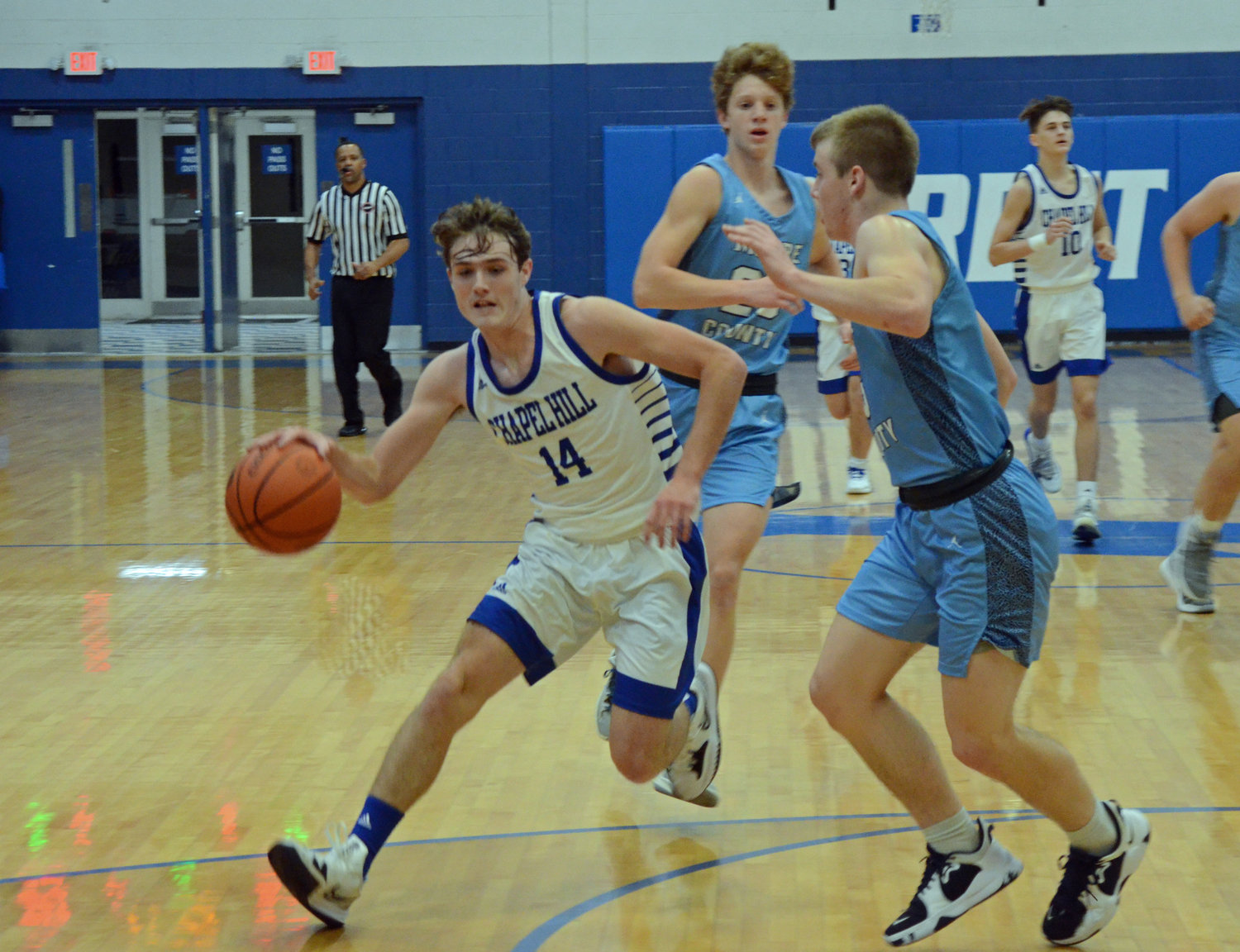 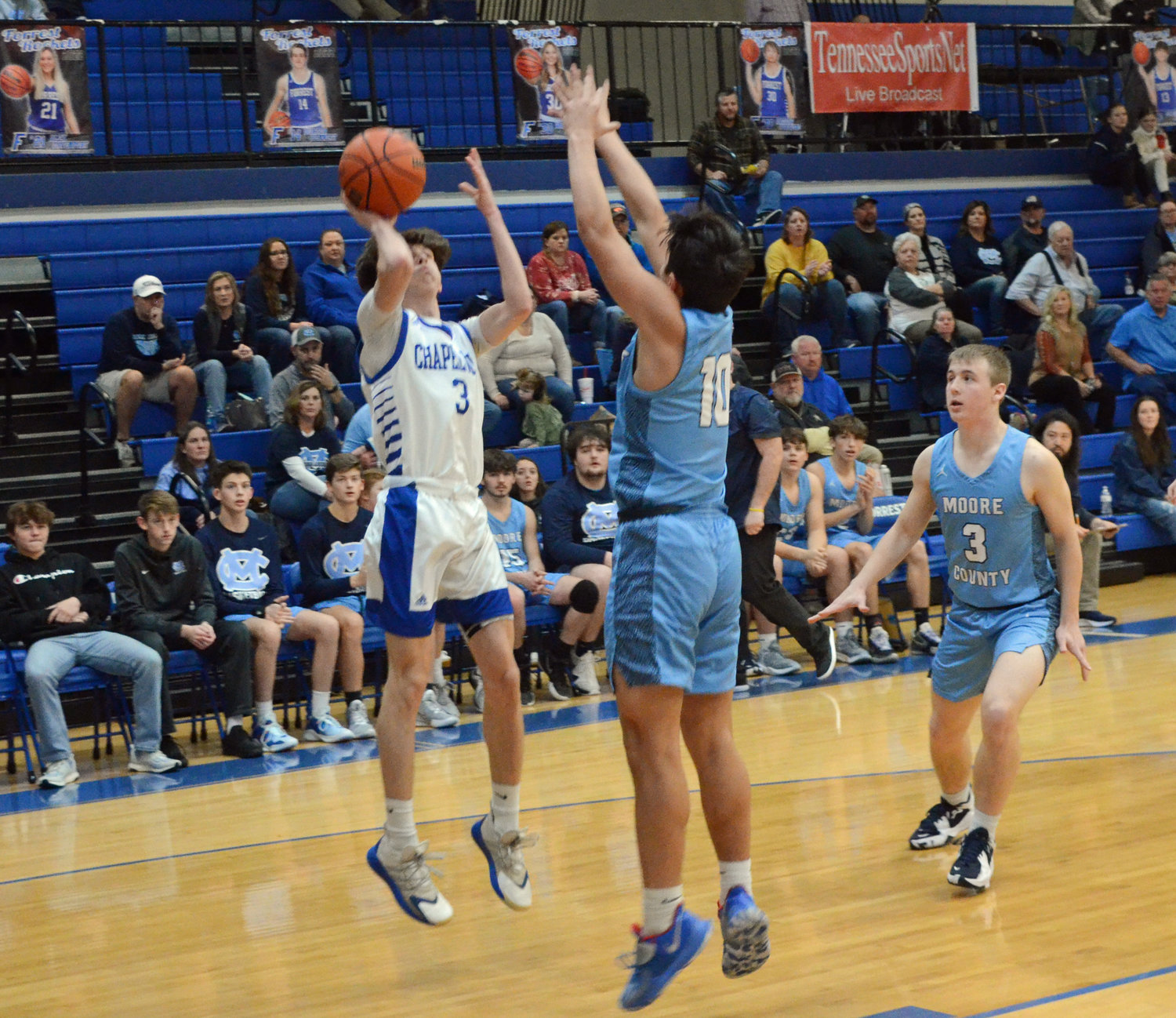 Ben Villazon (3) opens the game with a nice jumper from the corner. 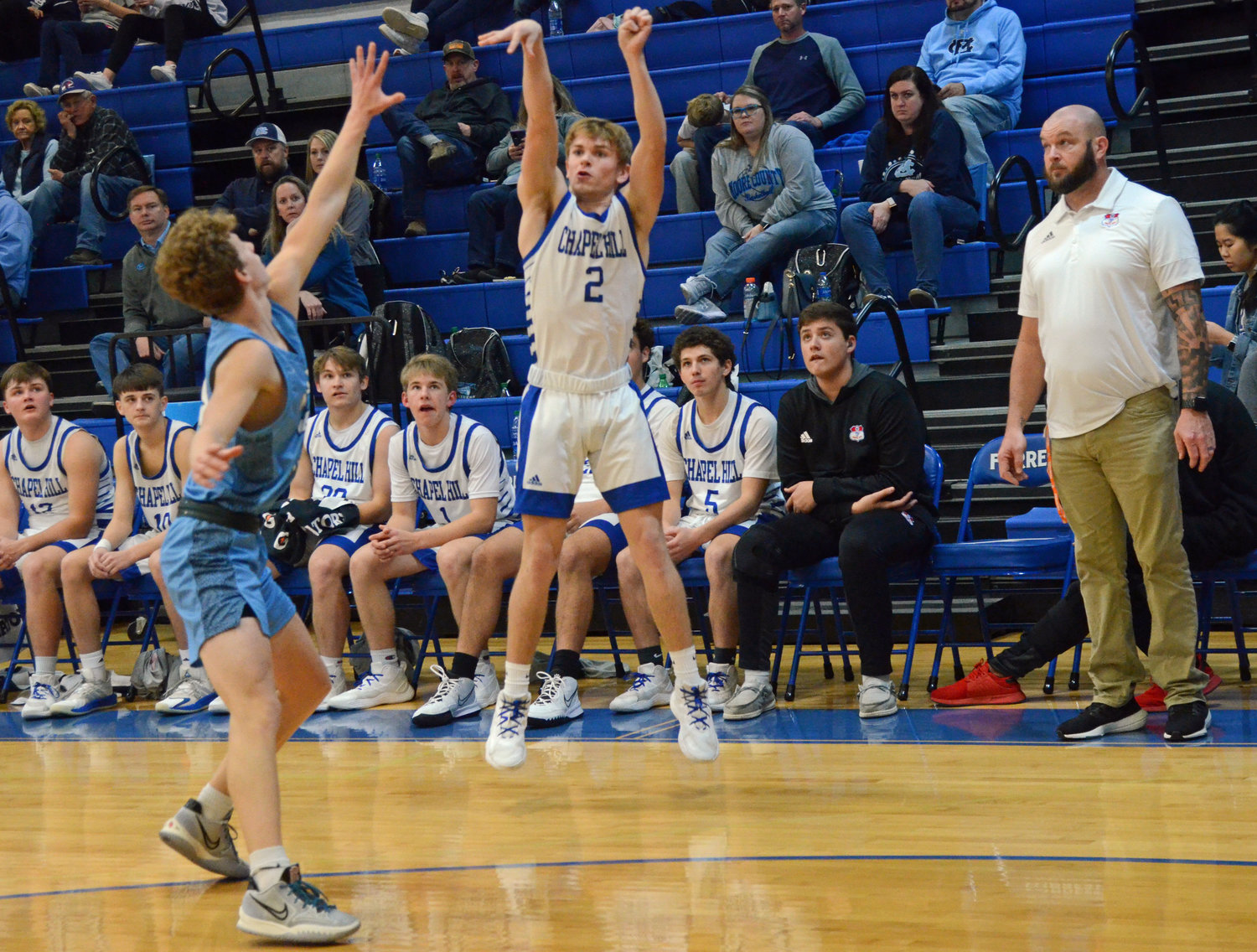 Tayton Swift (2) puts up a corner jumper versus the Raiders.
Previous Next
Posted Wednesday, December 15, 2021 6:31 am
By Anthony S. Puca Sports Writer

The Forrest Rockets came in to Tuesday night’s game riding a five-game winning streak, including a 54-38 win at Moore County on December 3.

The Raiders got their revenge on the Rockets as they won by ten points at 43-33 in a low scoring contest at Chapel Hill.

The Moore County defense held the Rockets under double digits in the first three periods and got a balanced scoring attack with Dawson White and Will Harder scoring 10 points apiece.

Hunter Bennett was the lone Rocket in double digits in the scoring column with 11 points.

Villazon nailed a mid-range jumper to start the game and Harder matched the bucket at the other end.

The two teams battled back and forth with tie scores at 4-4 and 7-7 before a steal and score by White was followed by another Moore County bucket and an 11-7 lead.

Villazon scored off a Bennett steal and fast break and one free throw by Copeland at the end of the first period made it a 12-9 contest.

White and Mealer exchanged baskets and then White came up with a steal and score to give Moore County a 16-11 lead when both squads went ice cold from the field.

Harder broke the scoring draught with one free throw and Forrest scored on a McCown basket before back-to-back baskets by the Raiders made it a 21-13 contest at the half.

The Rockets chipped away at the eight-point lead, cutting it in half at 23-19 on a Bennett bucket, but the Raiders put together a big 8-3 mini-run to lead 31-22 at the end of the third quarter.

The Rockets came back behind some good defense and a 6-0 run on offense as Villazon drilled a 3-pointer and a Bennett bucket cut the Moore County lead to 31-28.

A couple of missed Rockets’ shots and two baskets by the Raiders put Forrest back in to a 35-28 hole, but a Mealer basket brought them back again, slicing the Moore County lead to five points.

Forrest called a timeout with 1:35 to play and Bennett scored out of the stoppage to make it a four-point game at 37-33 but the Rockets did not score again and the Raiders (2-8) scored six points for the 10-point win.