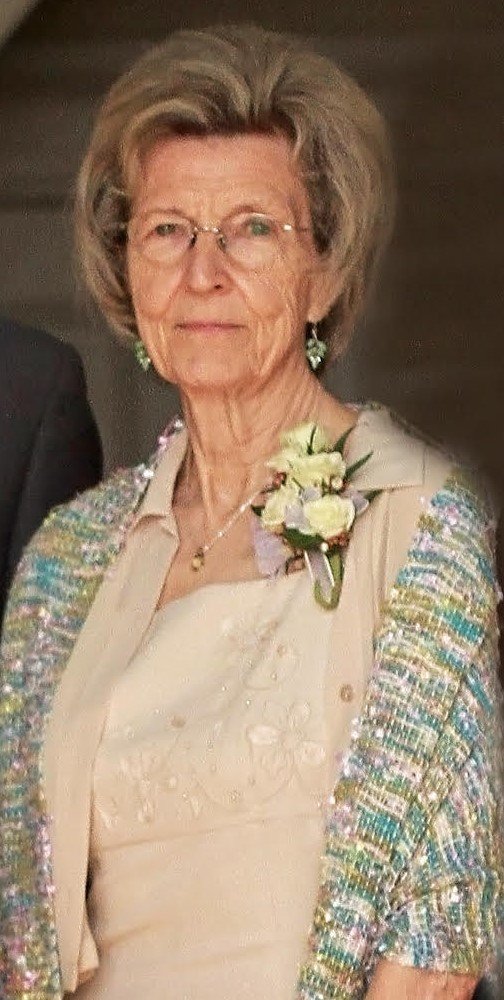 Nancy Jane Boyd Bradley, 83, passed away Friday, February 25, 2022, in NHC Oakwood after suffering a stroke a few weeks earlier. The daughter of Oscar Stephens Boyd and Alice Elizabeth Thomas Boyd, she was born at the family home on Third Avenue, Dec. 24, 1938, into one of Lewisburg’s most influential business families. She was predeceased by her parents, her younger sister, Betty Louise Boyd Pusey and husband, Bob Pusey, her sister-in-law, Charlene Bradley Nicholas (Nick), and her son George Ewell “Brad” Bradley, Jr. She is survived by her loving and devoted husband, George Ewell Bradley, Sr., who she married Aug. 31, 1963 (58 years ago); her son John Stephens Bradley and his wife, Tammy of Cornersville; her daughter-in-law Terrie K. Bradley of Lewisburg; her three granddaughters, Lauren Bradley Johnson (Zach) of Lewisburg, Anna Grace Bradley and Mary Kate Bradley of Cornersville; her nieces and nephews, Nancye Nicholas Hobbs of Lewisburg, Elizabeth Pusey Brown (Mike) of Virginia Beach, VA; Boyd Pusey of Unicoi, TN; Brian Pusey of Radford, VA; and Eleanor Pusey of Little River, SC. Her first great-grandchild is expected in May. To all of these family members and her many friends, she was a ray of sunshine and a great source of personal encouragement.

Mrs. Bradley was a 1957 graduate of Marshall County High School, where she played the clarinet in the marching band all four years and was selected as a member of the All State Band her junior and senior years. She was an alumnus of Peabody College, where she lived in the UDC dorm, because she was a member of the United Daughters of the Confederacy. In 1961, she earned a B.S. degree in zoology at the University of Tennessee Knoxville. Following college graduation, she attended the University of Georgia’s School for Laboratory Technology in Atlanta and became certified by the American Society of Clinical Pathologists. During the years 1962 to 1993, she held laboratory positions at Crawford-Long Hospital in Atlanta; St. Thomas Hospital in Nashville; Rohm and Haas Chemical Manufacturing in Huntsville, AL; Maury County Hospital in Columbia, TN; Taylor’s Hospital in Lewisburg; and Williamson Medical Center in Franklin, TN. She became a certified medical supervisor in 1985.

Apart from her medical career, she enjoyed music, art, antiques, gardens, history, and literature. As a trained pianist, she found great pleasure in playing the oldest hymns for her own enjoyment and truly appreciated classical music. She was an early supporter of the Nashville Symphony where she often took friends to afternoon organ concerts at the Schermerhorn Center. For many years, she volunteered monthly at the Birmingham Botanical Garden, where she knew the scientific names of most of the plantings. At one time she had over 100 varieties of ferns in her personal garden and knew the Latin name for each one. For several years, she was an active member of the local Iris Society and the Tennessee Iris Society. With an appreciation for fine antiques, she surrounded herself with collectibles and helped preserve many Marshall County artifacts. A charter member of the Marshall County Historical Society, she has served on the board of directors for the past 20 years. She and her husband were instrumental in establishing the Marshall County Museum at Hardison Annex. The highlight of each week was the time she spent with the Friday Night Friends at the Lewisburg Elks Lodge, where her husband has been a member for 60 years.

A life-long Christian, Mrs. Bradley attended Church Street Church of Christ during her childhood and teen years, but made sure to attend church camp each summer with the youth at First Cumberland Presbyterian Church of Lewisburg, where her grandmother, Mrs. Bessie Boyd, was a noted Bible scholar and much-loved Sunday School teacher. Most recently she has been an active member of First United Methodist Church of Lewisburg. In prior years she was a member of the Farmington United Methodist Church where she served as the Youth Leader. She also was a Cub Scout den mother for her son’s troop.

Visitation with the family will be Thursday, March 3, from 4 to 8 p.m. at London Funeral Home. The funeral service will be conducted Friday, March 4, at 1 p.m. in the sanctuary of First United Methodist Church, Lewisburg, with one hour of visitation at the church prior to the service. The funeral will be conducted by Rev. Mark Irvin and Rev. Brad Holliman. A graveside service will follow at Lone Oak Cemetery with Rev. Robert Montgomery and Rev. Leland Carden officiating. Active pallbearers are Zach Johnson, Todd Lovett, Roger Carroll, Chesney Gold, Eric Walker, and Mike Wells. Honorary pallbearers are the Friday Night Friends of the Lewisburg Elks Lodge and members of the MCHS Class of 1957.

For those who wish, donations may be given to the First United Methodist Church Building Fund or a charity of your choice.

London Funeral Home and Crematory assisted the family with all arrangements.