The first round of the TSSAA 2020 Class A playoffs featured the Cornersville Bulldogs traveling to take on the Huntingdon Mustangs.

The meeting marked the fourth year in a row that the two teams have squared off in the playoffs with the Bulldogs winning in 2017 and 2018 and the Mustangs winning big last year and this year followed that pattern as Huntingdon secured a 48-8 victory to move on to the next round. 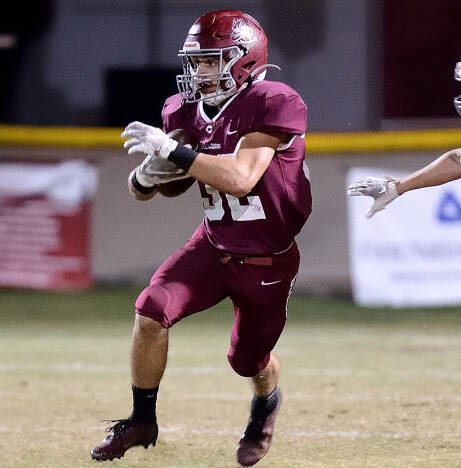 Senior Brady Calahan (32) led the Bulldogs in rushing with 898 yards on 134 carries and scored a team-high nine touchdowns for the Bulldogs who finished the season with a 7-4 record after being eliminated from the playoffs Friday night at Huntingdon.
Photos by George “Pap” Warren 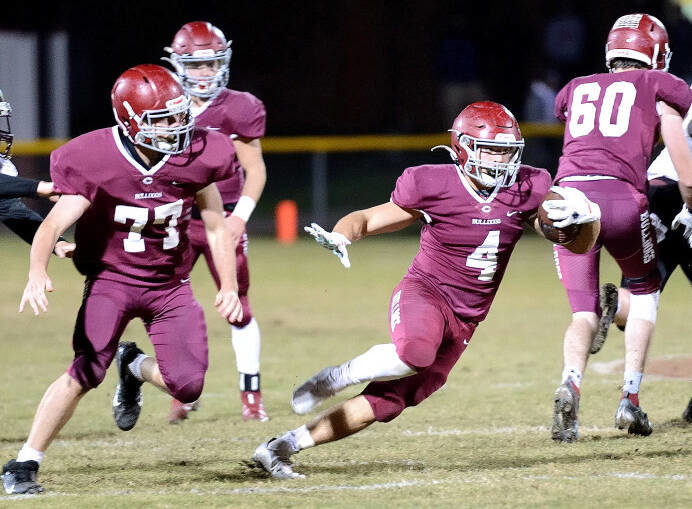 Junior running back Cason Warner (4) had another big year for the Bulldogs, rushing for 718 yards on 116 carries and six touchdowns. 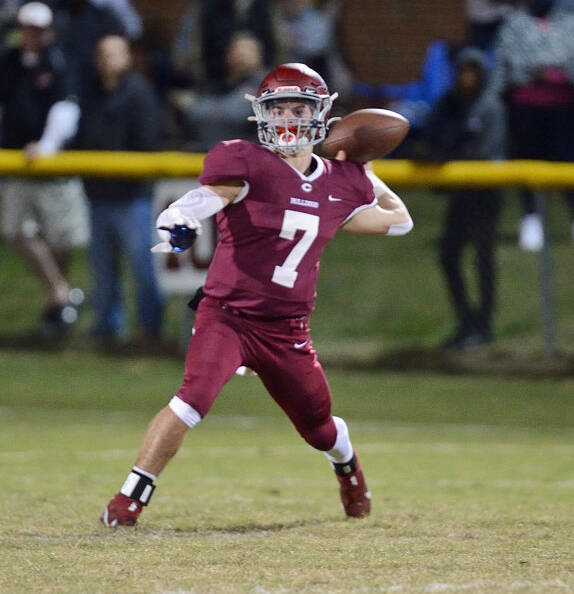 Senior quarterback Jackson Farler (7) ran for 133 yards and three touchdowns and threw for 471 yards and two TDs for the Bulldogs, who are currently on a five-year playoff run. 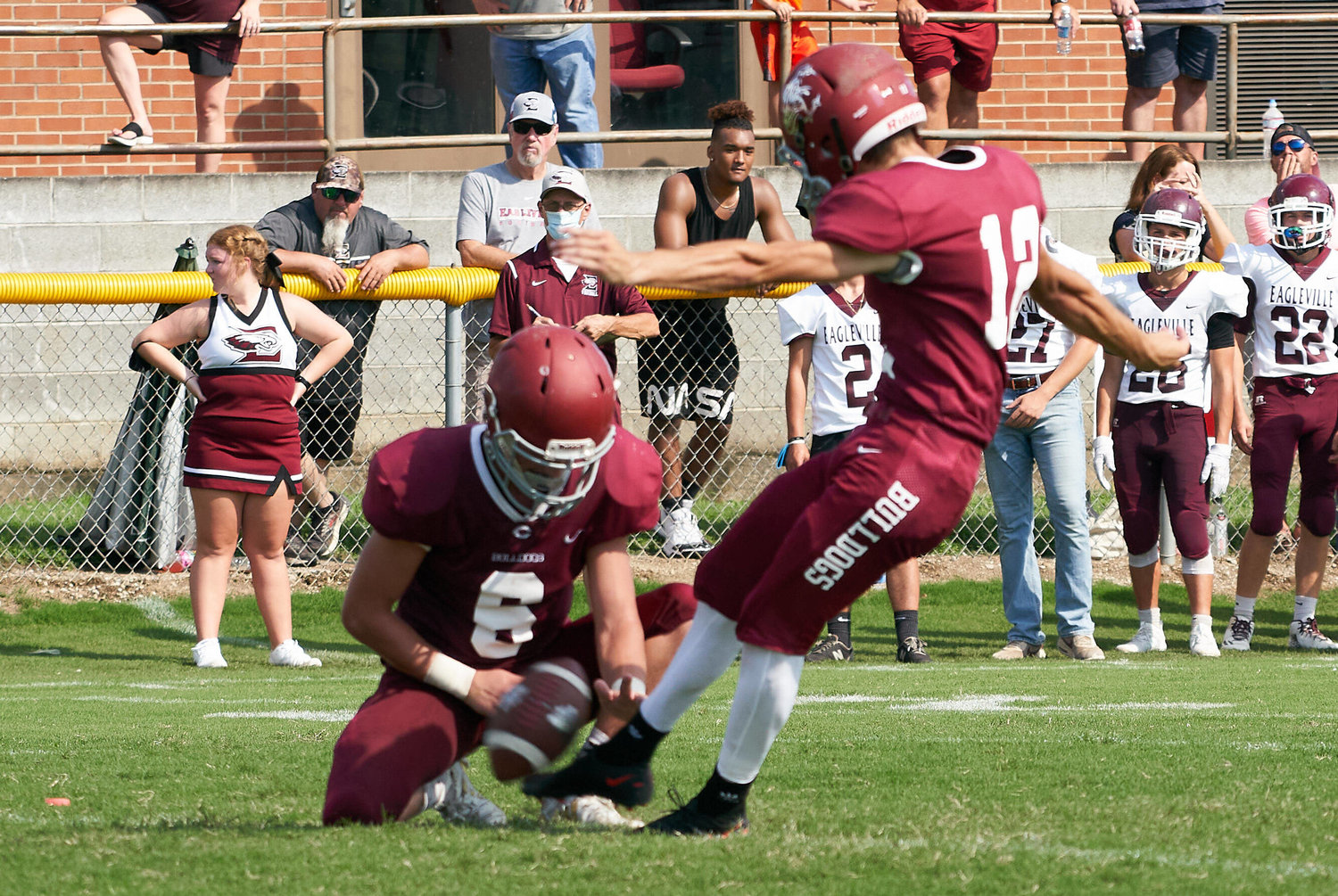 The first round of the TSSAA 2020 Class A playoffs featured the Cornersville Bulldogs traveling to take on the Huntingdon Mustangs.

The meeting marked the fourth year in a row that the two teams have squared off in the playoffs with the Bulldogs winning in 2017 and 2018 and the Mustangs winning big last year and this year followed that pattern as Huntingdon secured a 48-8 victory to move on to the next round.

“We met up with a pretty good football team in Huntingdon,” Cornersville coach Gerard Randolph said. “They did a good job of what Huntingdon does, they ran the ball well and we were pretty much outmanned.”

“They do a lot of misdirection, that’s part of their single wing and they coach it up well.”

Huntingdon is a long, long way away from Cornersville, it is on the other side of Buck Snort and as we all should know, Buck Snort is not a hop, skip, or jump away.

The Mustangs’ field is called Paul Ward Stadium and is built like a small college arena, complete with large stands and artificial turf.

You do not see that much with 1A teams and to compare it to Frog Bottom, well, you get the picture.

Senior Brady Calahan, the lone representative for the Bulldogs at the opening coin toss per COVID-19 pandemic protocol won the toss and deferred to the second half.

The Mustangs received the kickoff at the 15-yard line and returned the ball to the Huntingdon 40-yard line.

The first play for the Mustangs resulted in a fumble caused by Cornersville’s Rhett Woodard who also recovered the ball as the Cornersville faithful cheered.

Unfortunately, the Bulldogs promptly gave it back on a fumble with the Mustangs recovering and a deep sigh came from the visitor side.

The Mustangs made good this time as Grant Bartholomew scored on an 18-yard run.

The two-point conversion was no good and with 10:16 left in the first quarter Huntingdon led 6-0.

Cornersville could not move the ball and Tyler Brockman punted the ball away and a dead-ball personal foul pinned them back at their own 4-yard line.

The hand off went to Ethan Reliford, who broke through the Bulldogs’ line and raced down field, but the speedy Alex Hillard ran him down at the Cornersville 24-yard line.

Reliford got the ball again and raced into the end zone and Blake Barkley pushed in the two-point conversion and with five minutes gone in the first quarter, Huntingdon led 14-0.

The second quarter began with the Bulldogs in possession at their own 7-yard line, but the Mustangs’ defense held and forced another Brockman punt that was returned by Bartholomew to the Bulldogs’ 23-yard line.

Two plays later Aden Hutcherson ran in an 18-yard touchdown, but the two-point conversion failed and the Mustangs led 20-0.

The Bulldogs, pulling themselves together, began an 11-play drive that ended when senior quarterback Jackson Farler ran around the left side and burst free and ran untouched into the end zone.

Cason Warner rammed home the two-point conversion and Cornersville cut into the Mustang lead at 20-8.

The Mustangs came right back as Hutcherson scored his second touchdown and Barkley added the two-point conversion to push the lead back to 20 points at 28-8 with 2:36 left to halftime.

The Bulldogs, fighting the clock, again rose up off the deck and were heading downfield in an attempt to get back in the game, but in what more than likely sealed the game for the Mustangs, a Farler pass was intercepted by Blake Reeves and returned for a touchdown and combined with the two-point conversion, Huntingdon now led 34-8.

The second half showcased the efficiency of the Huntingdon single wing offense with its misdirection handoffs combined with a stifling defense that doomed the Bulldogs.

“We were very fortunate to play the number of games we did,” Randolph said, “We were fortunate to get to play games and make the playoffs and we’ve got to look at these things and appreciate them.”

Brady Calahan, with sadness in his eyes said, “This (game) is going to give me nightmares for the next year or two, but I couldn’t be more thankful to have played on this team.”

“The coaching staff, I really am blessed to have them be a part of my life for these four years. I couldn’t have asked for anything better.”

The season ended for these Bulldogs and when the team gathered around Randolph as the sound of the Huntingdon bell pealed in the background, the seniors bode farewell to their careers wearing the maroon and white.

The Bulldogs say goodbye to Jackson Farler, throwing those left-handed passes, Alex Hilliard’s flashing track speed, and Brady Calahan as the heart and soul of the team.

Returning a slew of good ball players Randolph and his coaches will look to:

Rhett Woodard-This young man’s performance on defense earned the respect of all he faced. He did all that was asked of him, making plays on both sides of the ball. A complete football player.

Cason Warner who as the saying goes, “If you are going to tackle him you better bring your lunch because it going to take all day.”

Barrett Powers-Strength, endurance, and technique the young man has it all.

Sam Mitchell-Anchor of the line.

Ben Franklin-A tremendous football player. He will be a sophomore.

Eli Welch-Great basketball player who turned his skillset to the gridiron. Tough, rugged, and smart. He will be one of the leaders.

As the season switches to basketball, Randolph and his team will look to spring practice sessions and then to the summer break, anticipating the hint of fall and the call as the legendary voice of the Vols John Ward stated, “Its football time in Tennessee.”