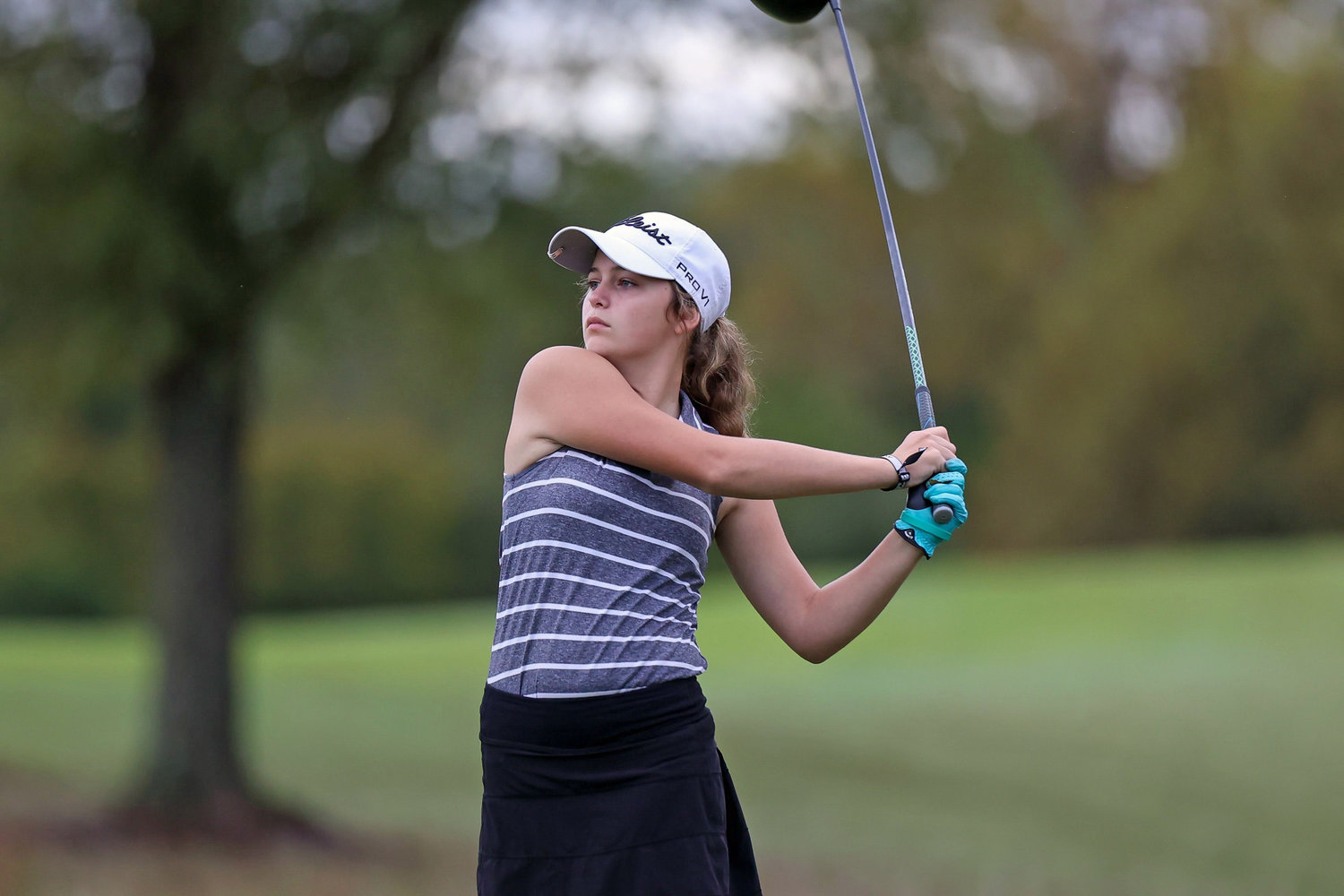 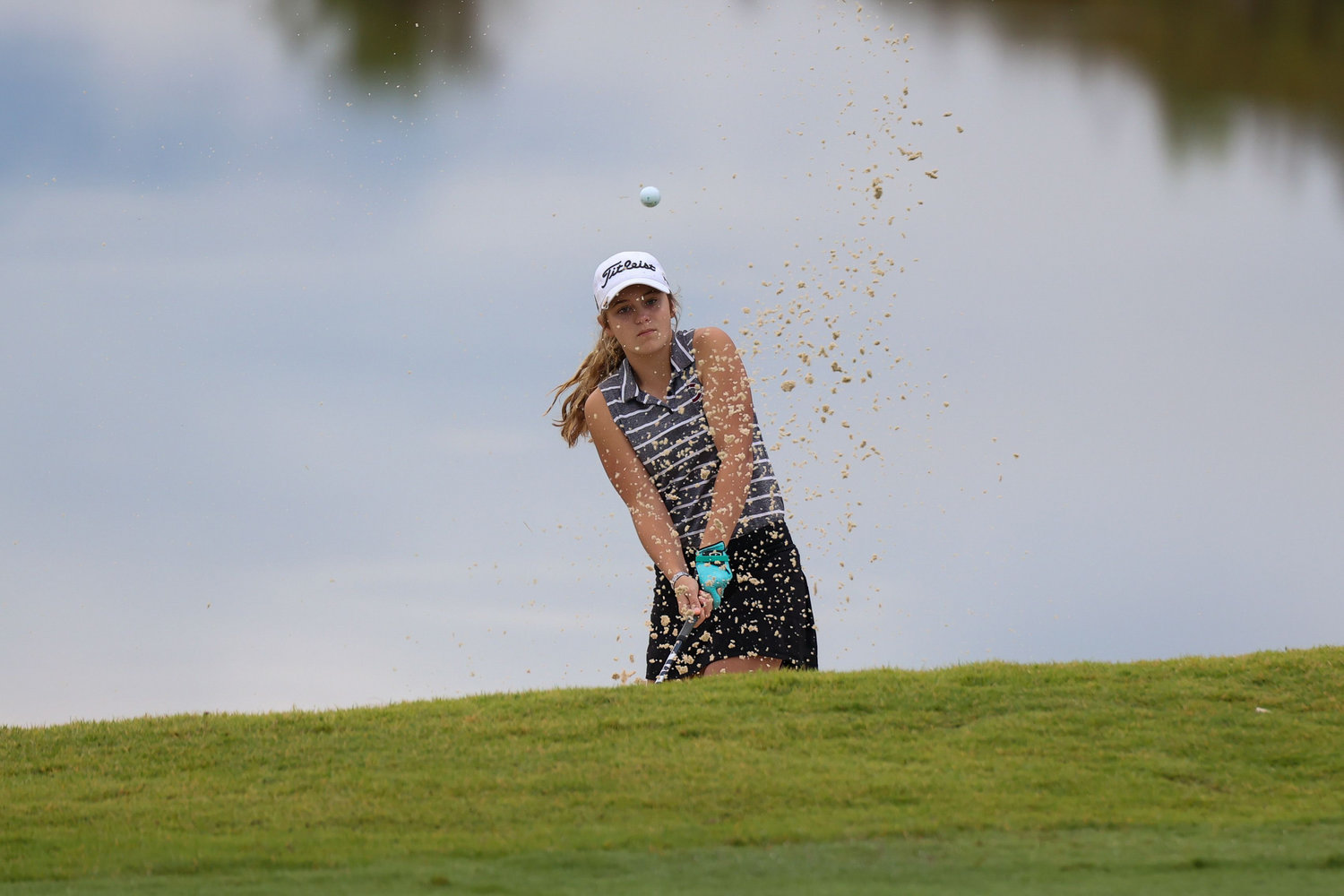 Annabelle Mulliniks hits out of a bunker at the scenic Sevierville Golf Club in East Tennessee.
Previous Next
Posted Thursday, October 14, 2021 6:37 am

“In all, it was a great week, and we couldn't be more proud of how she battled and played, and once again met some really great people along the way,” Newton said.”
Cornersville coach Peyton Newton
By Anthony S. Puca Sports Writer

Cornersville’s Annabelle Mulliniks was the lone county golfer to qualify for the Class A state golf tournament for the second season in a row and the sophomore made a huge jump from a tie for nineteenth last year to a Top 10 finish in last week’s tournament.

“We are very proud of Annabelle, hard work pays off is all I can say,” Cornersville coach Peyton Newton said. “In round two, we did not tell her exactly where she stood, but we made sure she knew to stay calm and go shot by shot because we knew she was close. When she finished her second round we pretty much knew she reached her goal of a top 10, and that was really cool.”

Mulliniks shot a 10-over par 80 in the last Thursday’s first round before slipping to an 87 on Friday for a 167 total and a ninth place finish.

“In all, it was a great week, and we couldn't be more proud of how she battled and played, and once again met some really great people along the way,” Newton said.

After several years at the WillowBrook Golf Club in Manchester, the TSSAA moved the tournament to the scenic Sevierville Golf Club in East Tennessee at the Foothills of the Great Smoky Mountains.

Mulliniks had plenty of family support in her long journey east as her mom and dad, along with her papa from Georgia, and her brother Joseph came between his studies at Auburn University.

The 4,186-yard Highlands Course was a much different tract than WillowBrook with changing elevations and a myriad of hazards awaiting errant shots.

“Annabelle had the opportunity to play the course this summer on the Sned's tour, but this was a course that is as tough on players physically as any I have seen,” Newton said. “It was very hilly and the walks from hole to hole were long and rough.”

Mulliniks had trouble on the front nine both days, shooting a 44 in the first round and a 47 in round two.

The back nine was much better for the Lady Bulldog as she came home in 36 strokes on Thursday and 40 on Friday, including her lone birdie of the tournament on the par-3 16th hole.

“Day one of the tournament she really showed her skills, she drove the ball great and made some really good chips and putts,” Newton said. “Day two was a grind, she did not get any putts to fall early and had some really bad breaks that caused her to have to buckle down and focus.”

Mulliniks qualified for the state tournament with a third place finish (85) in the Region 5-A Tournament at the Buford Ellington Golf Course on the grounds of the Henry Horton State Park in Chapel Hill.

“Going into the off-season she will be working hard on chipping and putting,” Newton said. “She hits the ball so well off the tee, and she has days where her chipping is really good too. It's just getting consistent there and getting better at putting. I can honestly see her shaving six to seven strokes off of her 18-hole average by next golf season if she can fix the putting and get more consistent chipping.”

Region 5-A Tournament champion Karlie Campbell was on fire at the state tournament as the Summertown ace carded an even-par 70 on Thursday, followed by an amazing 63 on Friday for a 133 total and a seven-under par finish.

Incredibly, that was not enough as two-time defending state champion Sophie Linder matched Campbell’s low tournament round of 63 on Thursday and the Gordonsville High School senior shot a one-under par 69 on Friday to win by one stroke and claim her third consecutive title.

“It was amazing how the top two girls played in the state, we are very familiar with Karlie Campbell because we play Summertown often,” Newton said. “We also got to play a practice round with Sophie last year so we knew her as well. Annabelle got to play the second round this year with Sophie, the eventual winner, so we were seeing the nerves and battle first hand.”

The Carthage, TN resident will try to make it four state championships in a row next year.

Mulliniks also has high hopes for next season and Newton is confident the Cornersville standout will improve on her game, just as she has over the past three years.

“There will be pressure for sure next season, but for many reasons,” Newton said. “Our region is very tough, you never know how the course will be playing, and it comes down to a one day tournament to qualify. AB almost thrives under pressure though. She is built for it. I cannot wait to see how she responds.”