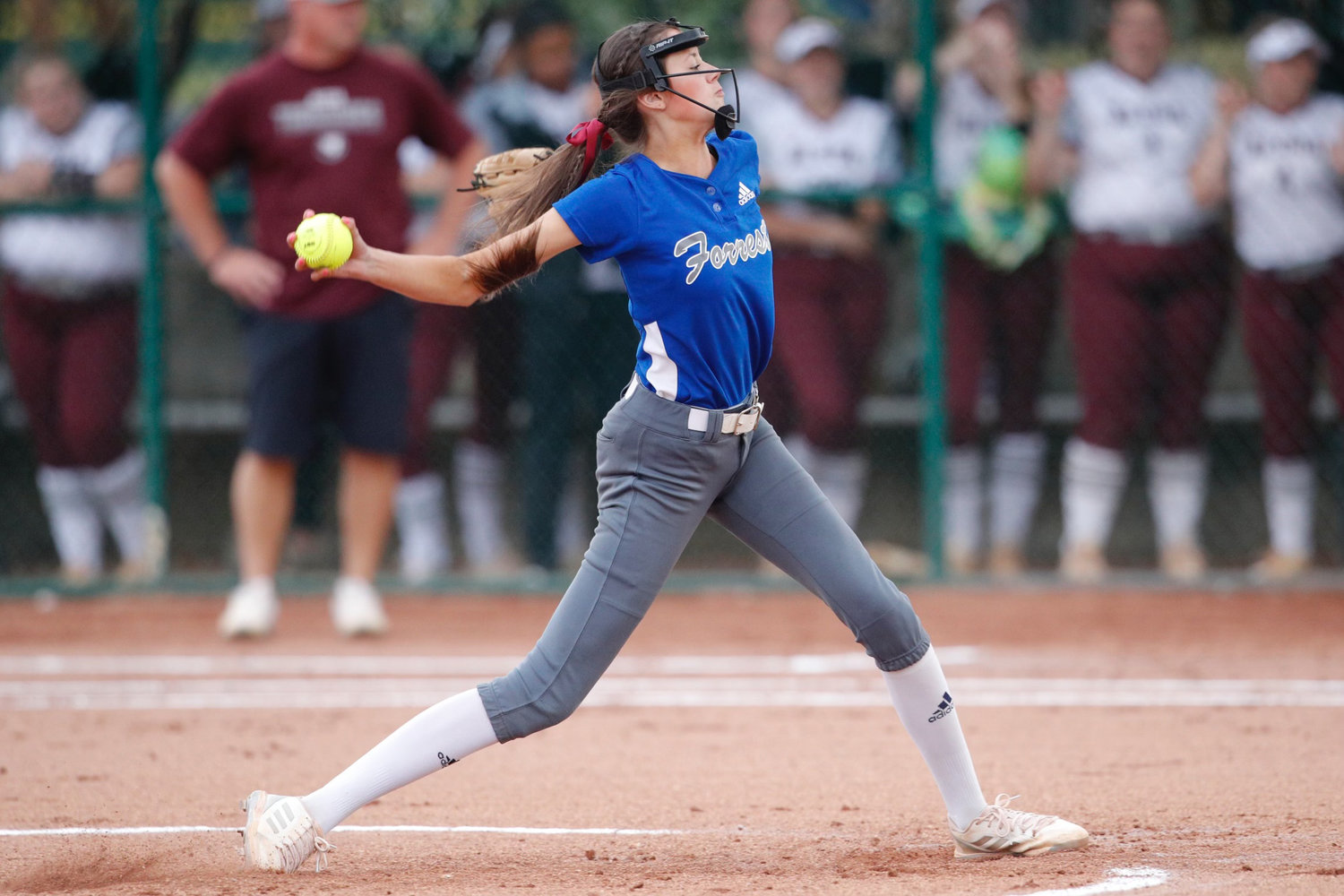 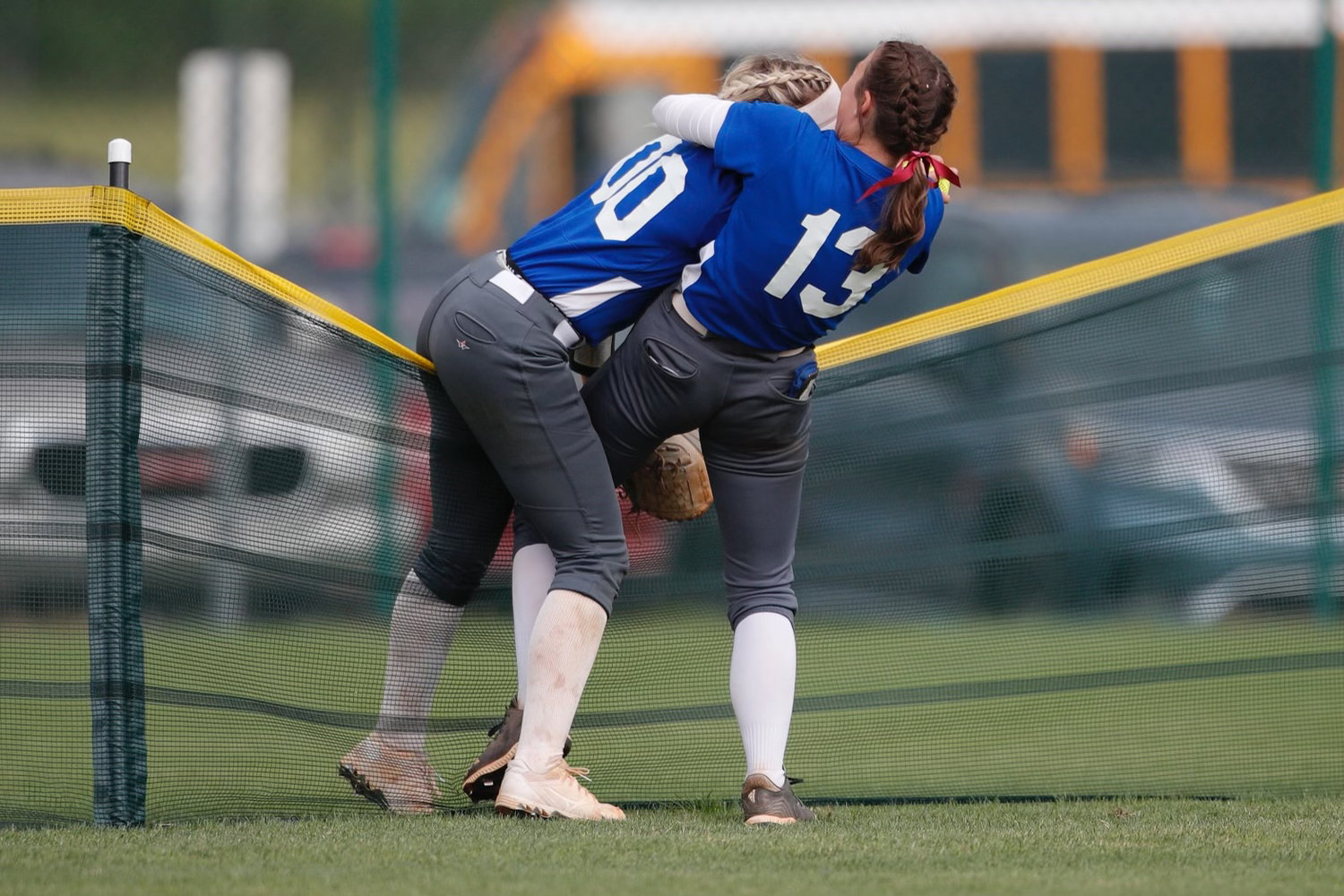 Addi Bunty (13) grabs Forrest center fielder Abby Ferguson as Ferguson straddles the fence after making a circus catch to save a homerun in the first inning. Photo by Danny Parker
Danny Parker 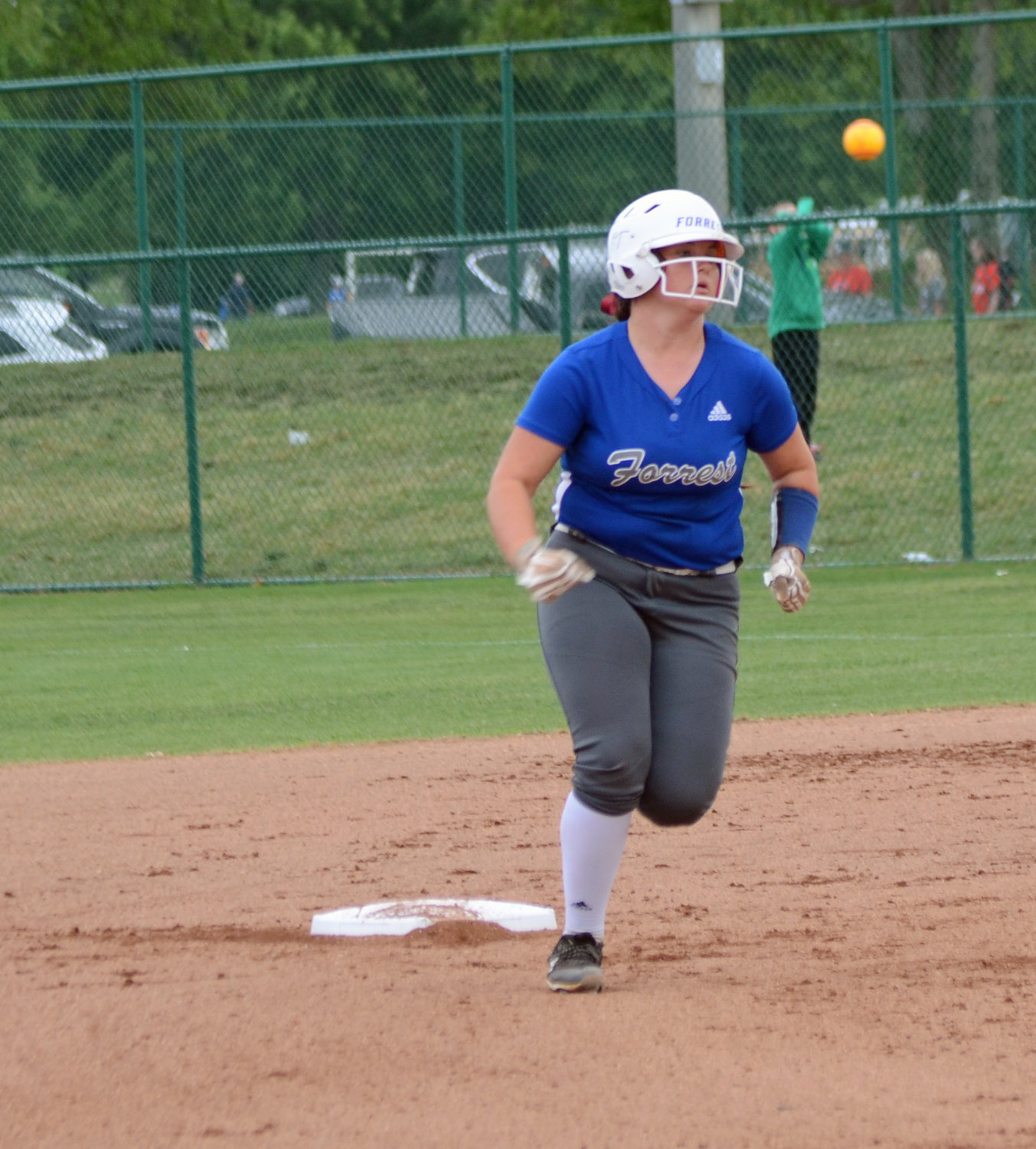 Carli Warner rounds second base on her way to home plate after jacking a two-run homerun in the first inning.
Tribune photo by Anthony S. Puca 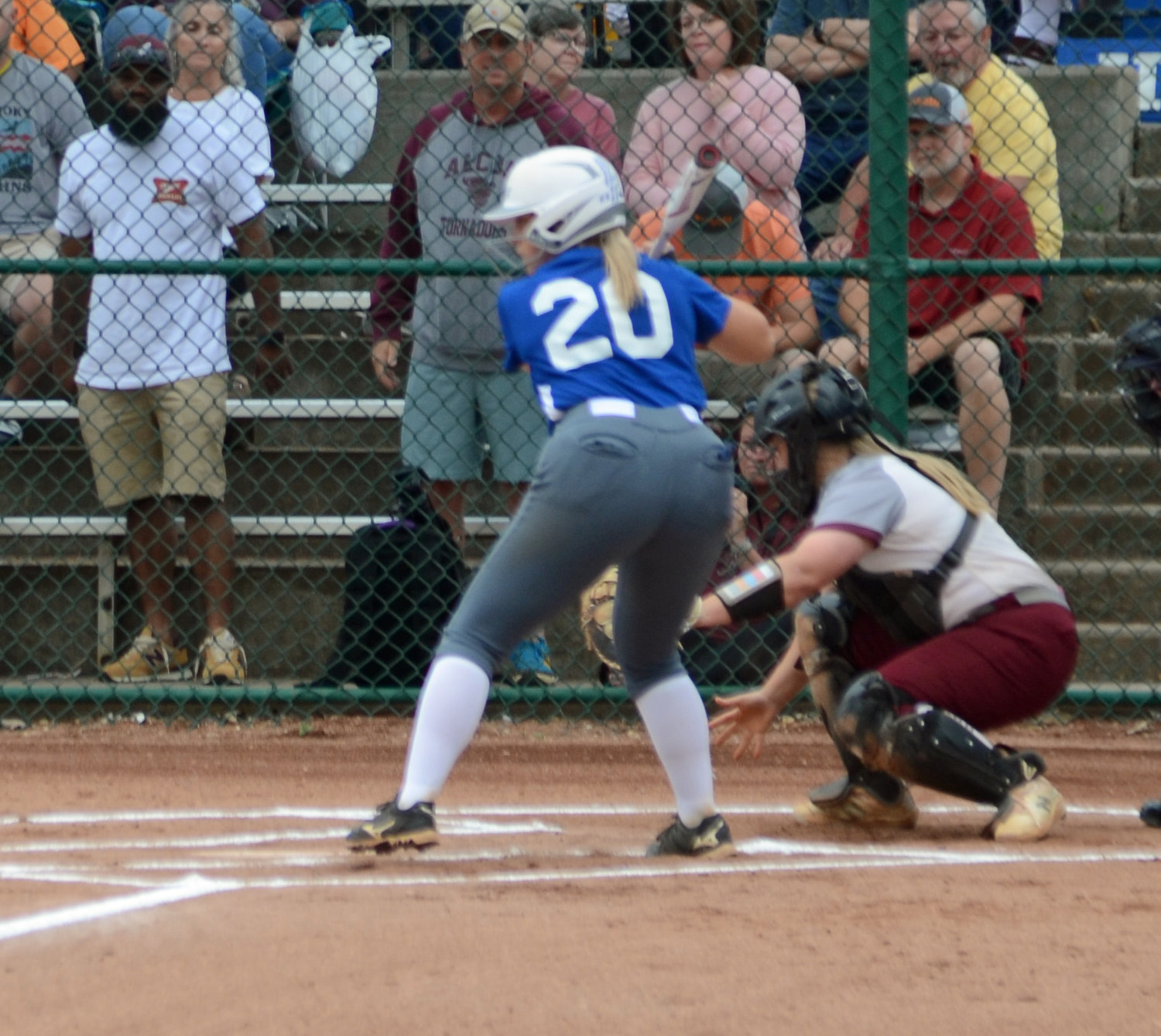 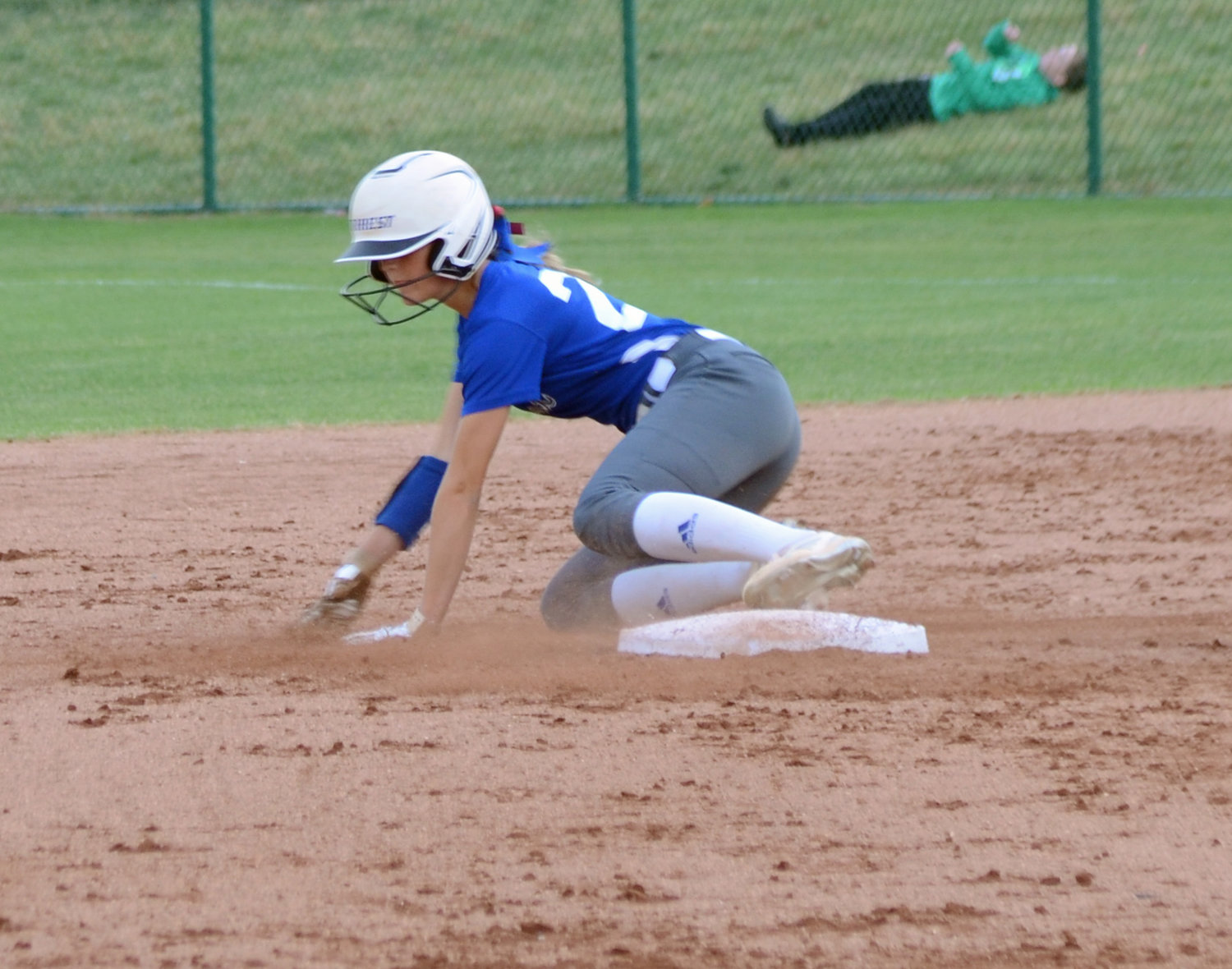 “I felt like Forrest beat Forrest there,” Forrest coach Shelby Lightfoot said. “We wanted to give them a better game, in the first inning I think we gave up six errors, that’s just crazy, that’s unheard of. We definitely did not give the Forrest effort I am kind of disappointed in that.””
Forrest coach Shelby Lightfoot
By Anthony S. Puca Sports Writer

The defending back-to-back state champion Forrest Lady Rockets need history to repeat itself after giving a game away in Friday’s winner’s bracket final at the Spring Fling XIX in Murfreesboro.

Forrest could not overcome six errors in the field that led to a 10-6 loss to Alcoa, sending the four-time state champions to the loser’s bracket.

“I felt like Forrest beat Forrest there,” Forrest coach Shelby Lightfoot said. “We wanted to give them a better game, in the first inning I think we gave up six errors, that’s just crazy, that’s unheard of. We definitely did not give the Forrest effort and I am kind of disappointed in that.”

The Lady Rockets have to win three games in a row to complete the three-peat, beginning with an early morning contest versus Loretto, who eliminated Summertown with a 4-3 win on Friday.

A win versus the Lady Eagles would set up a rematch with Alcoa and Forrest would need to beat the Lady Tornadoes twice to snatch the crown.

“No matter how good you are, that’s still a tough spot to be in, winning three games in a row against this type competition is hard,” Lightfoot said. “Tomorrow we will come in and take it one game at a time, first game we will look at Loretto and get past that one and look for the next game. You can do it, it will just be hard.”

Lightfoot was the pitcher on the 2008 state title team that pulled off the feat when they beat Cornersville and then Trinity Christian Academy twice to capture the school’s first state championship.

Things actually started well for the Lady Rockets versus Alcoa as a Carli Warner two-run homerun capped of a three-run first inning for Forrest.

The bottom dropped out shortly after that as the Lady Tornadoes sent 10 batters to the plate and scored five runs in the bottom of the first on just one hit off Forrest freshman pitcher Ella Chilton.

There was no scoring in the second inning and Forrest came back to tie the game in the top of the third inning on RBI hits by Leslie Bartoli and Briley Burnham.

Forrest junior Julie Williams, who had come on for Chilton in the second inning held Alcoa in check in the third inning, but in the bottom of the fourth the Lady Tornadoes scored three runs, including a two-run homerun by Jaylyn Halliburton.

Forrest did not score in the top of the fifth inning and Alcoa added two more runs in the home half of the stanza on RBI base hits by Cassa Arnold and Italia Kyle.

A Christa Warren sacrifice fly made it 10-6 in the top of the sixth but that was the last run scored in the contest as Alcoa broke Forrest’s nine-game winning streak and put a damper on the three-peat.