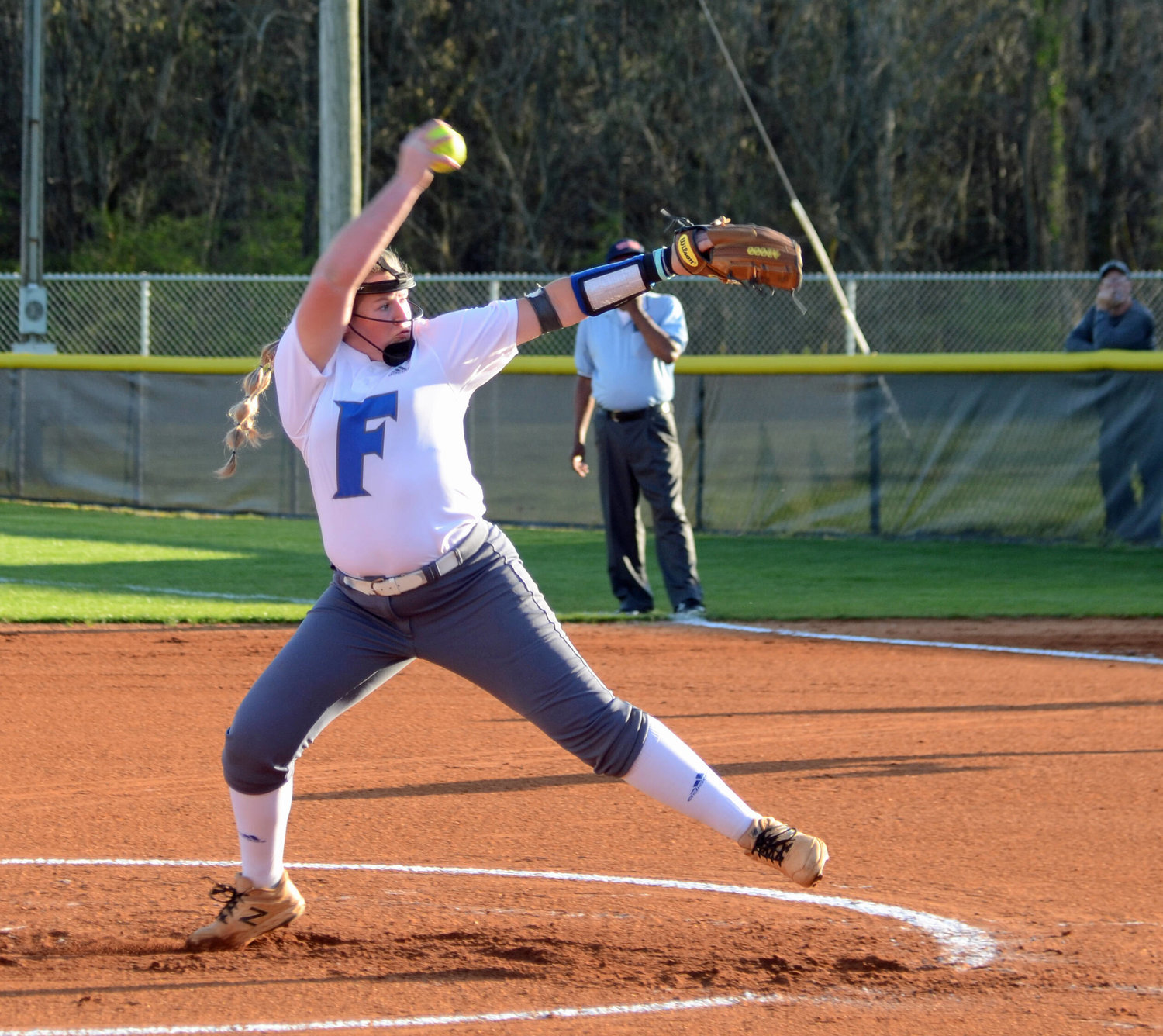 Forrest’s Ashley Milligan only gave up two hits, while striking out 14 and walking two Tigerettes’ batters in a 12-0 shutout win at Lewisburg Friday night.
Tribune photos by Anthony S. Puca 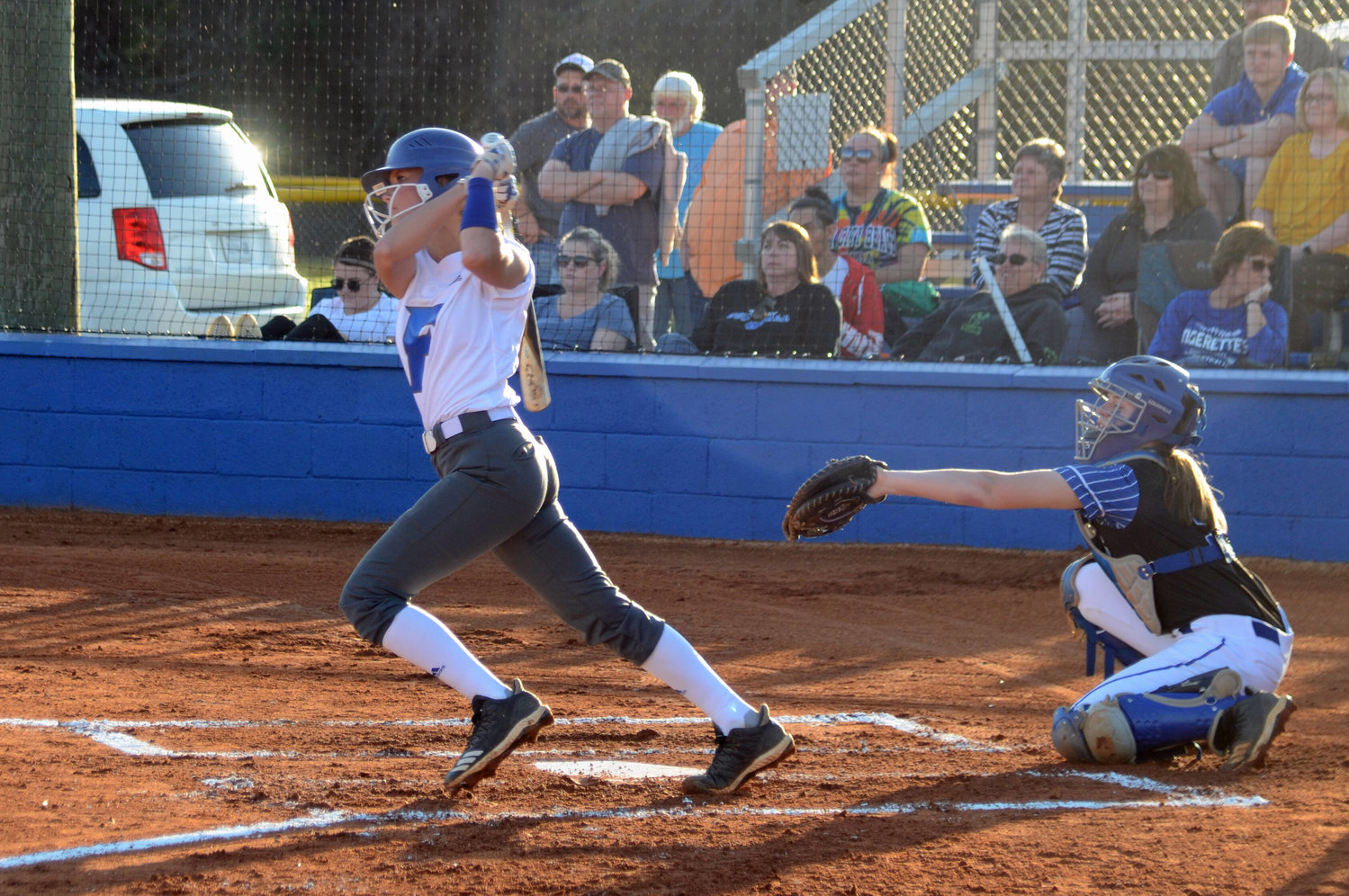 Forrest freshman Briley Burnham (14) went 3-for-4 to lead a 15-hit attack for the Lady Rockets. 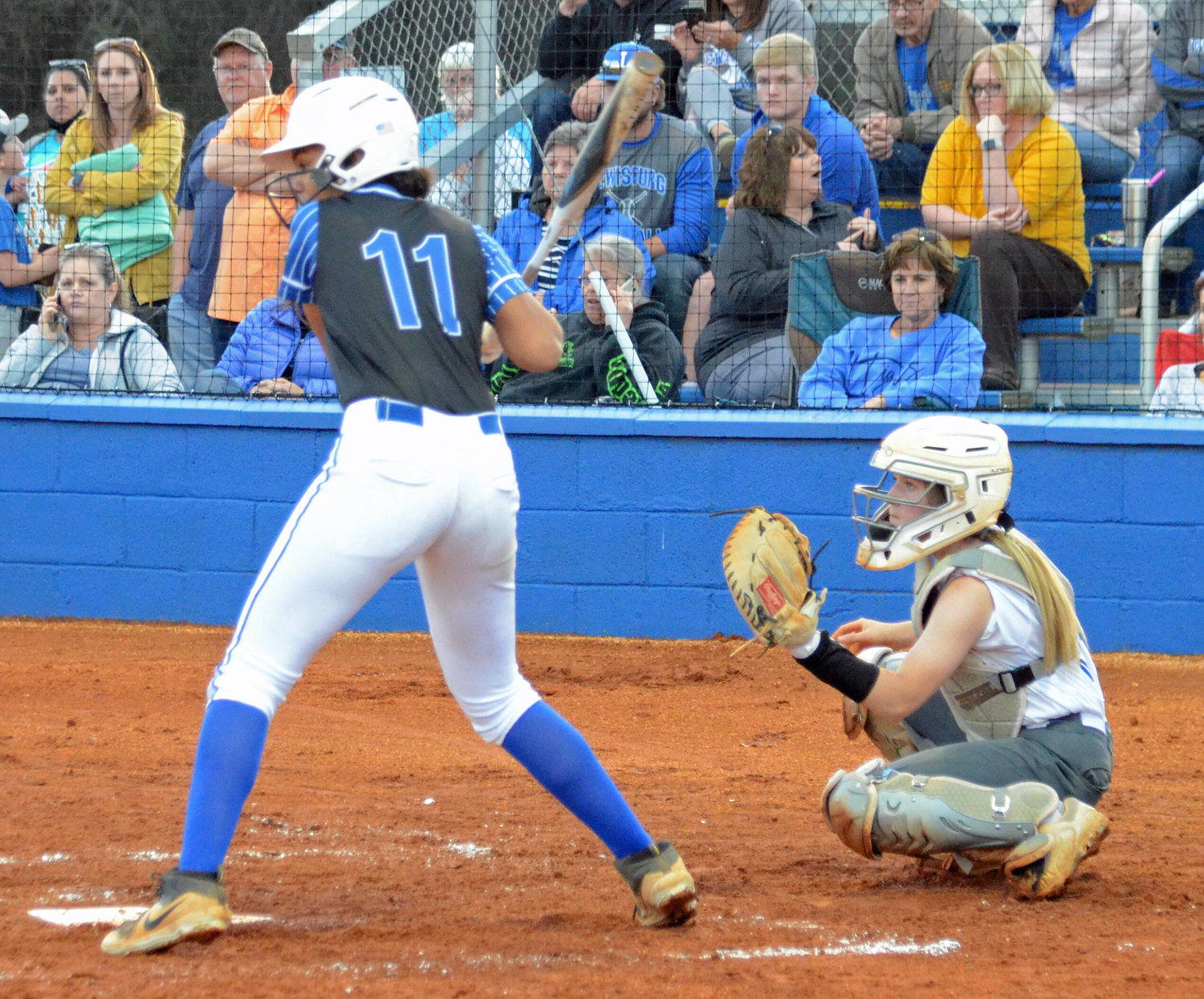 Marshall County’s Demiyah Blackman (11) had one of the two hits in the game for the Tigerettes. 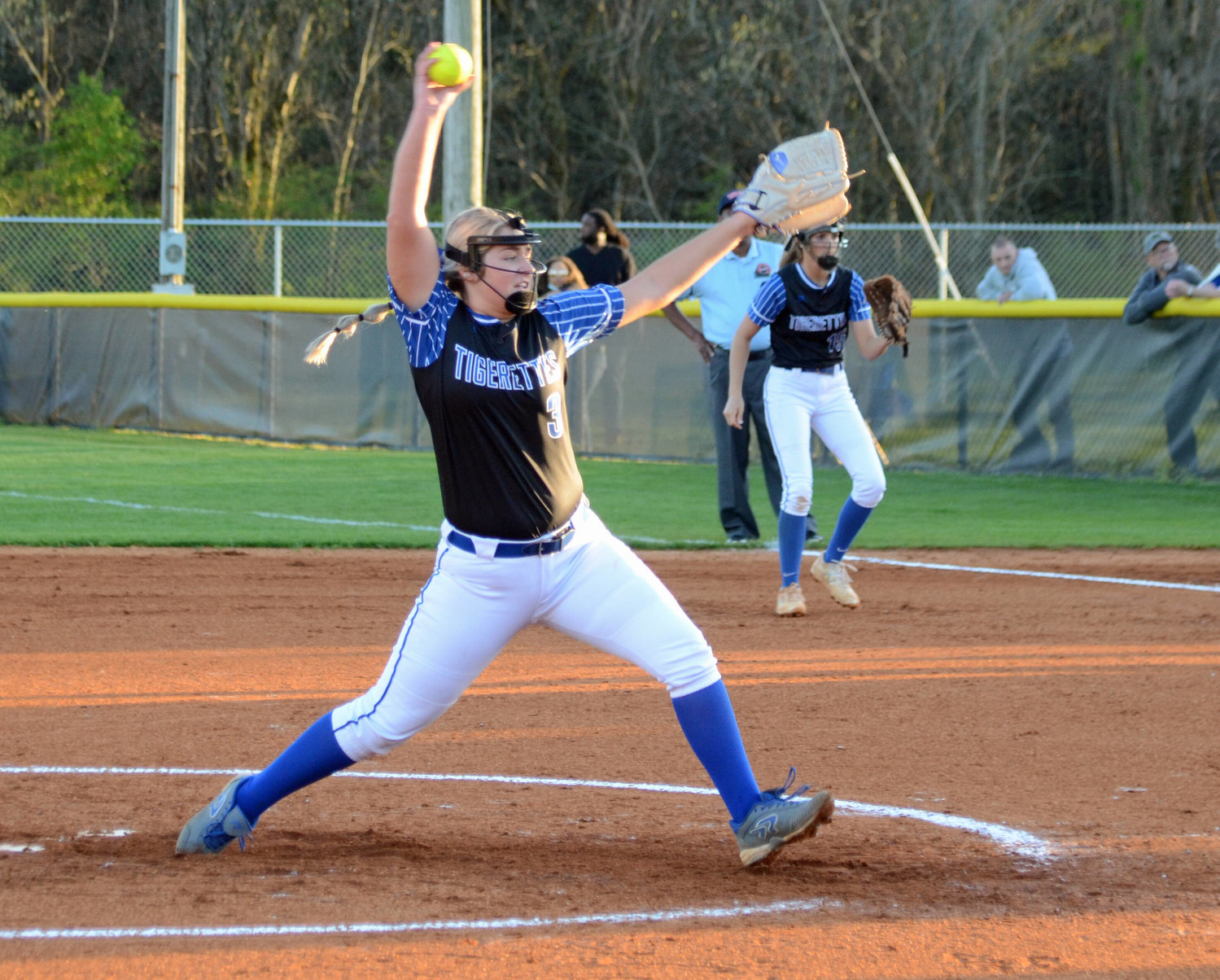 Taylor Pickle gave it all she had in the circle for the Tigerettes. 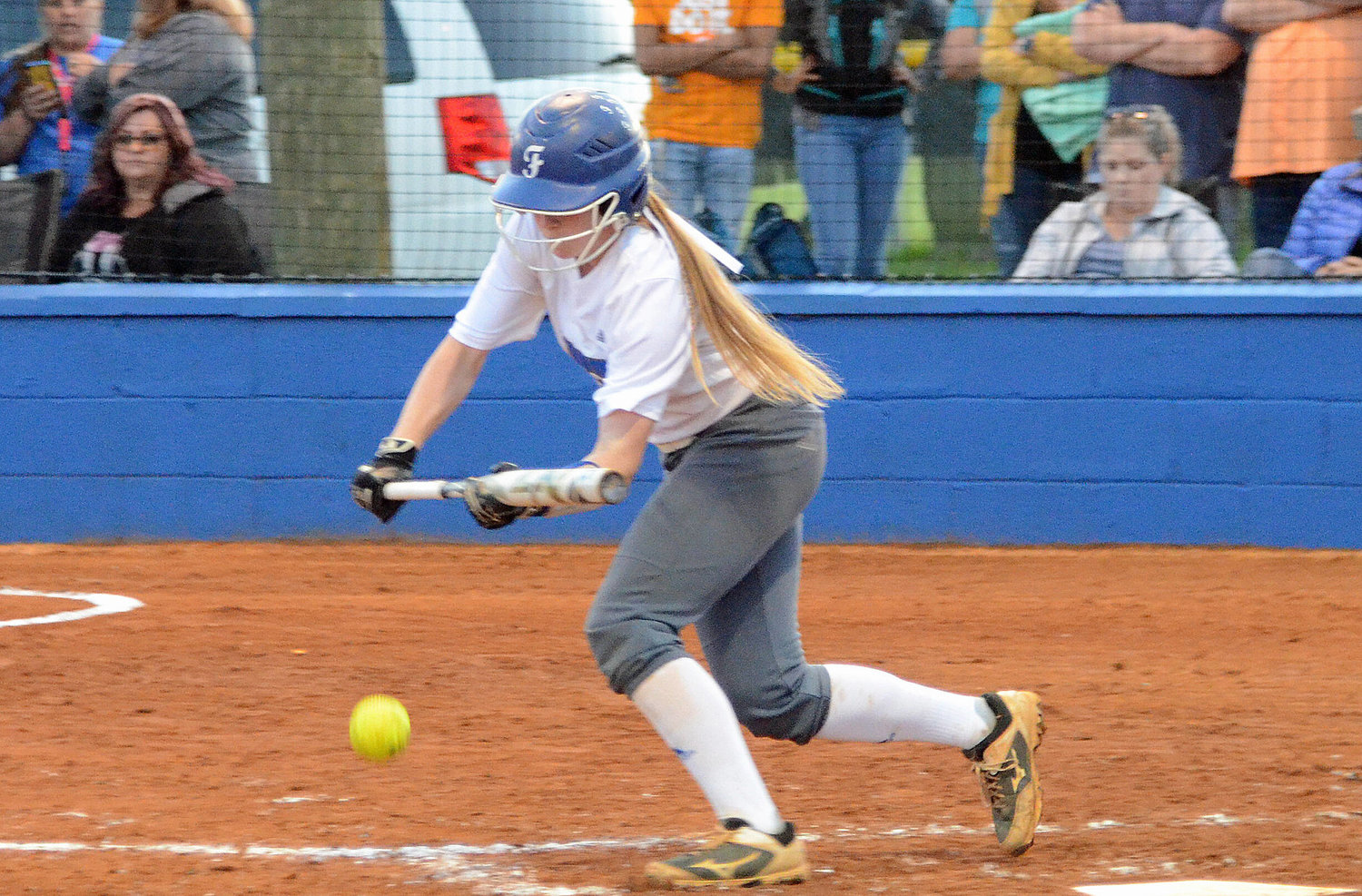 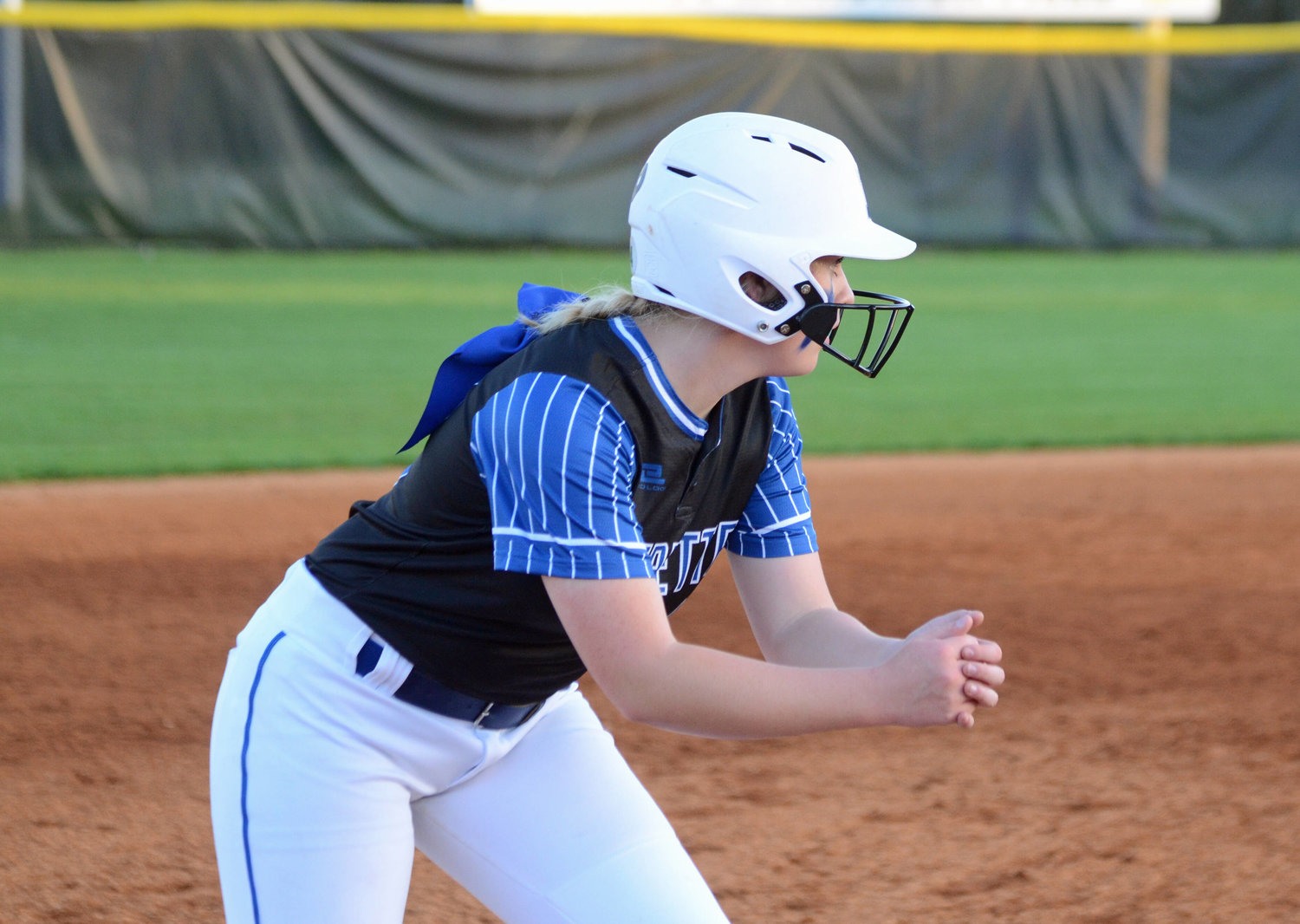 Marshall County’s Ellie Luce singled in the bottom of the fourth inning and was the only Tigerette runner to reach third base in the contest.
Previous Next
Posted Sunday, March 28, 2021 11:00 pm
Anthony S. Puca Sports Editor

“We haven’t been able to do this in a year, so any time you get to go play a team in your county, it’s a big game, there is just a lot on it,” Forrest coach Shelby Lightfoot said.

The defending Class 2A state champion Lady Rockets came up with their seventh consecutive win over Marshall County with a rock solid performance from senior ace hurler Ashley Milligan, who dominated in the circle with a career high 14-strikeout, two-hit gem.

Milligan, whose ERA is a stingy .708, has only surrendered three earned in six starts and has struck out 48.

“Ashley was going at them,” Lightfoot said. “That’s kind of what we talked about, we are going to have to use her a lot this year, so coming in we wanted to use less pitches and get outs fast.”

Forrest also banged out 15 hits on the contest with freshman Briley Burnham leading the way with a 3-for-4 effort at the plate while Laura Mealer, Milligan, Katelyn Helmick, and Abby Ferguson all had a pair of hits in the contest.

Freshmen Ferguson, Burnham, and Kirby have been knocking the cover off the ball to start the season with Ferguson batting .550 and the versatile fielder also leads the team with 7 RBIs and 6 runs scored and Burnham is batting .421 with 4 RBIs and both have one home run on the season.

“We have a big freshmen class and we feel like all of them can do what they are doing,” Lightfoot said. “Our underclassmen have a lot of travel ball behind them and we have coached them since middle school, so we know what they can bring.”

Jenna Blanton, Maggie Daughrity, Kiersten Blalock, and Kirby all came up with one hit apiece.

Demiyah Blackman and Ellie Luce had the only two hits off Milligan and Luce was the lone Tigerette base runner to reach third base.

MCHS starting pitcher Taylor Pickle set down Forrest 1-2-3 in the top of the first inning and Milligan struck out the side in order in the home half of the frame.

A Burnham two-out RBI single opened the scoring in the top of the second and Milligan came back with three more consecutive strikeouts in a row in the bottom of the stanza.

Pickle had a strong third inning, setting down Forrest in order and Milligan made it eight strikeouts in a row before Blackman slashed a two-out single to right field in the home half of the inning.

Milligan struck out the next batter and Forrest added three runs in the top of the fourth inning on a RBI sacrifice fly by Ferguson and a bases loaded, two-run double by Blanton.

Luce slashed a one-out single in the bottom of the inning and made it all the way to third base on a pair of wild pitches, but a pop-up out to Mealer at second base ended the Marshall County scoring threat.

Mealer led off the top of the fifth inning and reached third base on an infield error, combined with a bad carom.

Tatum Garrett reached on a Forrest error to lead off the home half of the inning, but was gunned down at second by Lady Rockets’ catcher Parker Wales, trying to advance on a ball in the dirt on an MCHS strikeout.

There was no scoring in the sixth inning and Forrest busted the game wide open in the top of the seventh as they sent 11 batters to the plate and scored seven runs on six hits in the frame.

The Lady Rockets (6-1-1, 2-0) play in the 19th Annual Southern Warrior Classic with games against Siegel and Stewarts Creek today and Smyrna and Mt. Juliet on Wednesday.

“We have a very hard schedule, but we plan that and the girls know that, win or lose we want to go over there and compete,” Lightfoot said. “We want to see good pitching and that will help us down the road, so we are going to go and compete and try to play to the best of our ability.”

The Tigerettes are off until April 5 when they travel for another intra-county rivalry contest at Cornersville.

MCHS beat the Lady Bulldogs 11-8 at Reese Hambrick Field in the first game of the season series.