Forrest High School swimmer Hayden Milligan has been hard at work within the Marshall County swimming community for several years.

After years of continual improvements and countless hours in the … 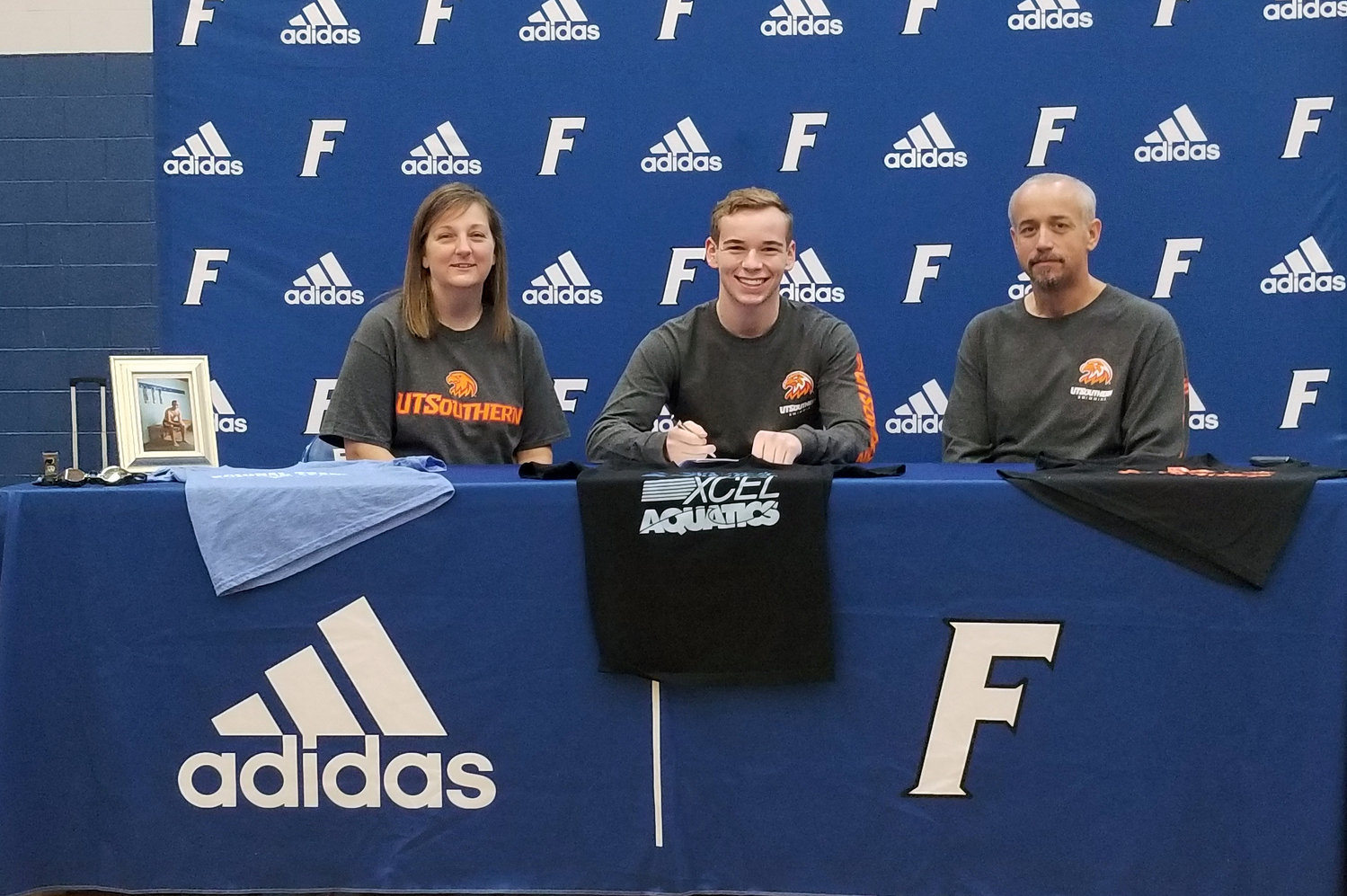 Hayden Milligan is joined by his family as he signs his letter of intent to swim for UT-Southern next season. Milligan is the first swimmer from Chapel Hill and the first male swimmer from Marshall County to sign a letter of intent to swim in college.
Tribune Photo by Chris Siers
Posted Friday, December 24, 2021 4:12 pm
By Chris Siers ~ sports@t-g.com
Forrest High School swimmer Hayden Milligan has been hard at work within the Marshall County swimming community for several years.
After years of continual improvements and countless hours in the pool, his swim career eventually led him to sign with UT-Southern, formerly Martin Methodist.
“It’s been a long ride. I’ve been swimming for almost nine years now. I didn’t really try to swim in college until the last year or two. It took going to Brentwood and Spring Hill every day. It took a lot of time and a lot of driving, for sure,” he said.
Milligan’s signing was a milestone for a few reasons, as he is the first swimmer from Chapel Hill to sign a letter of intent to swim in college.
He is also the first male swimmer in Marshall County to ink his letter of intent as well.
The recruiting process began when UT-Southern coach Drew Peterson reached out and after a visit to Pulaski, the rest was history.
“Coach Peterson messaged me a couple months back. I had actually been looking there because it’s close, fairly cheap and seemed like a good option. He messaged me and it was a big thing getting the first message from the coach,” Milligan said.
While primarily a freestyle sprinter, Milligan also competes in the backstroke and hopes to be a cornerstone in the foundation at UT-Southern, as the program is still in its infancy.
“With UT-Southern and it being I think two years old now, so most of the swimmers are young in general. It’s going to be cool getting to be one of the first swimmers there. It should be a situation where I’m coming in to help improve the team and get it started,” he said.
The positive culture within swimming has been one of the highlights in Milligan’s career.
While swimming is primarily an individual sport, continually pushing yourself for better times and participating in a highly-supportive swim culture has been among the highlights of Milligan’s career.
“It’s always good dropping time, but one big thing about swim is, it’s almost like you’re not swimming against other people. It’s like you’re always going against yourself. Then again, there’s the other people you are swimming with and they’re always very supportive. A lot of people who I’ve raced against, they’ve always been very supportive, asked how your times are, how you did and just very supportive,” he said.
While he’s still several months from officially arriving on campus, Milligan doesn’t have a major picked out just yet.
“As of right now, no. I have a few ideas, but I guess I’m going to get there and take some general education classes and see what I want to go into,” he said.