After a disappointing 2-4 record in 2020, the FMS Rockets have reloaded their arsenal and they unloaded the full barrage on Eagleville in Thursday night’s season opener at the Murrey E. Holton … 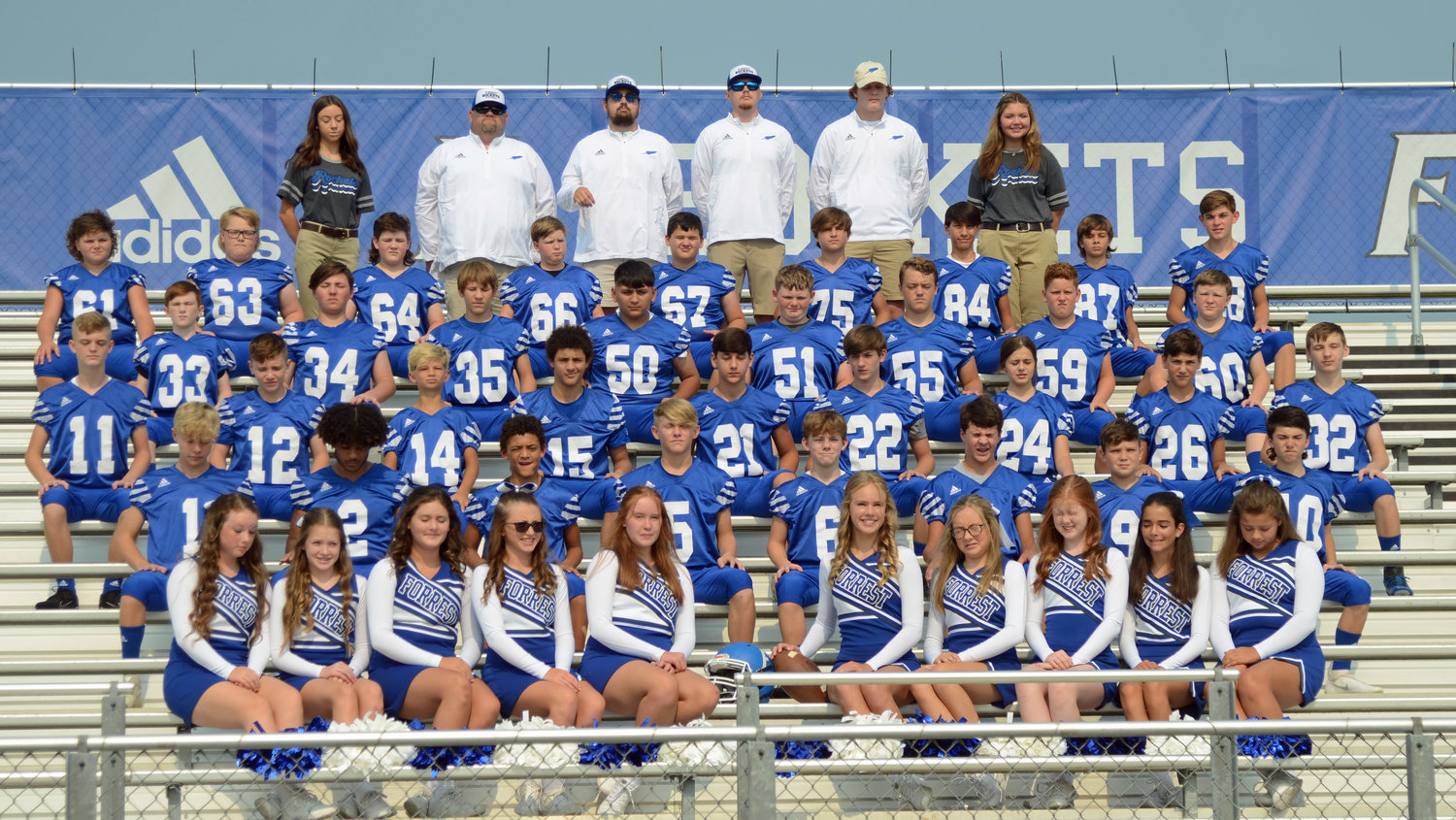 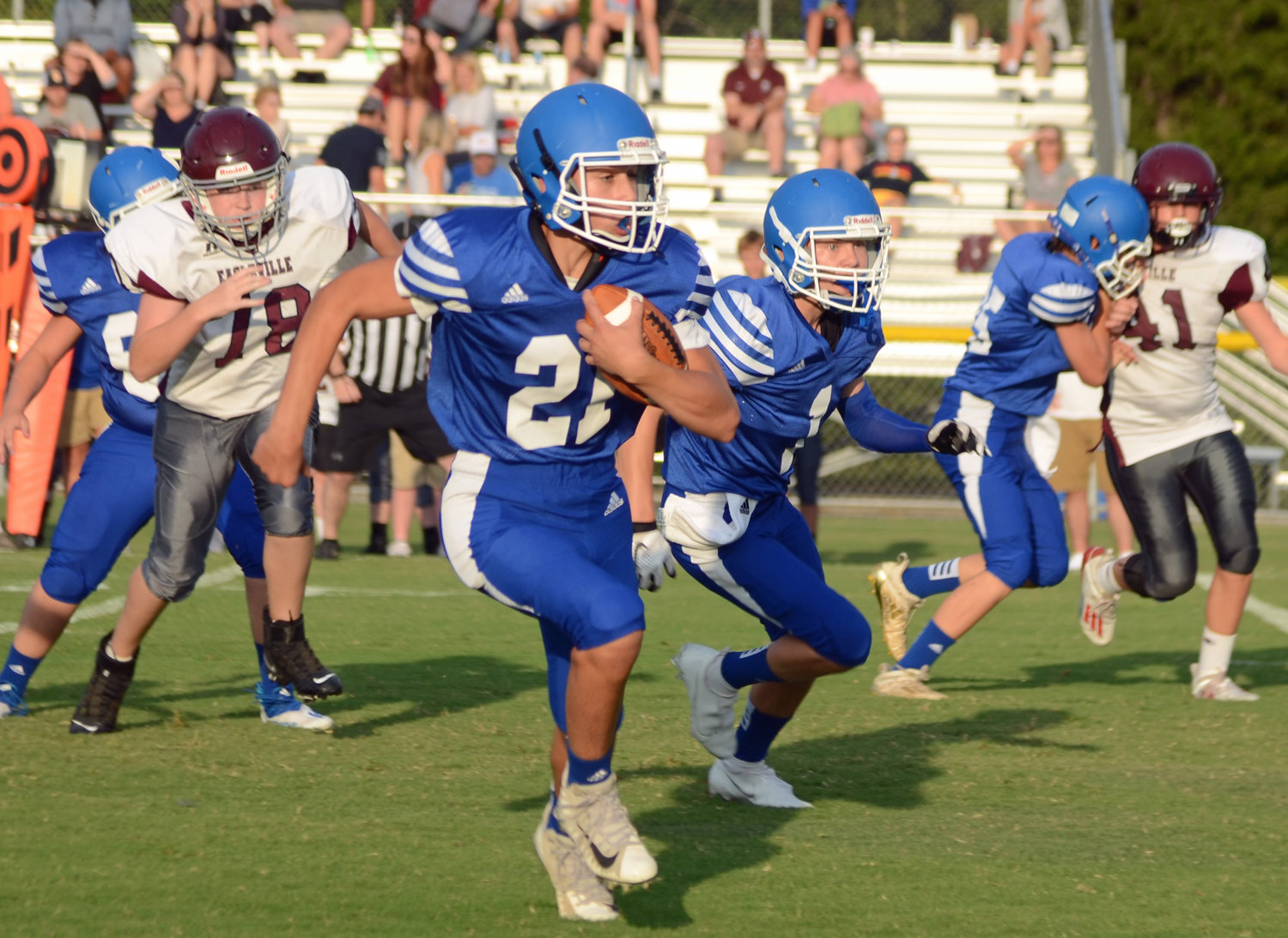 After a disappointing 2-4 record in 2020, the FMS Rockets have reloaded their arsenal and they unloaded the full barrage on Eagleville in Thursday night’s season opener at the Murrey E. Holton Memorial Field in Chapel Hill, blasting the Eagles 40-8.

“I think overall we improved from last week which was exciting to see,” FMS coach Tony Johnson said. “With the heat index, we were indoors all week so that was unfortunate, we had five days without conditioning, so when we got out here we were a little winded, we were sucking air.”

“So I’m proud our guys could dig deep even though we are a little out of shape right now and put a full ballgame together and compete against a good Eagleville team.”

The Rockets only had five offensive possessions in the Duck River Valley Conference contest and scored touchdowns on four out of the five series, plus they added two defensive scores in the blowout win.

“We are kind of that all gas, no brakes mentality,” Johnson said. “We like to hit it quick.”

Forrest had 156 total yards in the game and all came via the running attack with Eli Bell leading the way with 54 yards on five carries, Cohen Grissom had 43 yards on four touches and a touchdown, seventh-grade standout Fletcher Fields only toted the rock once and that was a 24-yard TD run.

Antonio Marable also made the most of his lone carry, scoring on a 21-yard run and quarterback Ryan Hill had two carries for 14 yards, including a 1-yard score on a keeper.

“We have multiple backs that run the football really, really hard and hit the holes,” Johnson said. “Cohen Grissom, Antonio Marable, Fletcher Fields, and Eli Bell are all really good running backs and Jacob Tincher is coming along, he is a seventh-grader that has never played before, he got to play this fifth-quarter JV and if he keeps working, he will eventually get some touches too, so with our backs, I couldn’t ask more from them.”

Eagleville won the toss and deferred and that was a big mistake as FMS scored on their second snap with Grissom scoring from 41-yards out, breaking several tackles while snaking through the entire Eagleville defense.

Hill added the 2-point run to make it 8-0 and FMS never trailed in the contest.

The Rockets’ defense forced a three-and-out that included a Bell 8-yard tackle for loss.

A poor Eagleville punt gave the Rockets great field position at the Eagles’ 39-yard line and after a 10-yard gain by Grissom on first down, Fields took the rock to the house on second down and Antonio Marable tacked on the 2-point run to make 16-0 with 4:22 remaining in the first quarter.

FMS continued its defensive dominance on Eagleville’s second possession as Chris Ogletree came up with a fourth down sack to give the ball back to the Rockets at the Eagleville 32-yard line.

The Eagleville defense tried to stay in the game as they stopped the Rockets on downs after a fourth down incompletion on the final play of the first quarter.

The Eagles got a little offense going as they drove to near the midfield stripe, but a fourth down incomplete pass gave the ball back to the Rockets at the Eagleville 49-yard line with 3:45 remaining in the first half.

Three consecutive runs by Marable, Bell, and Hill moved the ball to the one-yard line where Hill punched it in for a touchdown.

Grissom added the 2-point run to put the Rockets up 24-0 and three plays later the first half ended.

The Eagles took the second half kickoff and began to march down the field, ending up on the FMS 13-yard line after a nice pitch and catch from Ayden Vestal to Camden Cole.

On the next snap, Cole fumbled and Kasen Owen scooped up the rock at the 11-yard line and raced untouched 89 yards for the touchdown.

Marable run it in for two more points to put FMS up 32-0 with 4:14 remaining in the third quarter.

Eagleville put together its only scoring drive of the contest on the next possession, driving 55 yards with Vestal scoring on a 1-yard run and Blair Carter added the 2-point run to make it 32-8 with 7:08 remaining in the contest.

The Rockets were stopped on downs by the Eagles on the next offensive series before a big hit by Marable in the Eagleville backfield fired up the squad and Fields put the icing on the opening night cake when he picked off Vestal and raced 65 yards to pay dirt.

Bell added the 2-point run to cap off the blowout for the Rockets, who travel to Fayetteville this week.

Forrest has not beaten the Tigers since the 2015 season.

“We haven’t beat Fayetteville since 2015, that was the last time we went undefeated and won the DRVC championship,” Johnson said. “We have to build on this win right here.”

“Fayetteville always is super athletic, they always seem to have a tall quarterback that can run and throw and they always have some really good running backs and receivers, so we have to play really sound football, be more physical and come out with that win.”

In fifth quarter action, seventh-graders Tincher and Maddox Puca made some big plays with Tincher scoring on two long touchdown runs and Puca scored on a 53-yard pick-six.