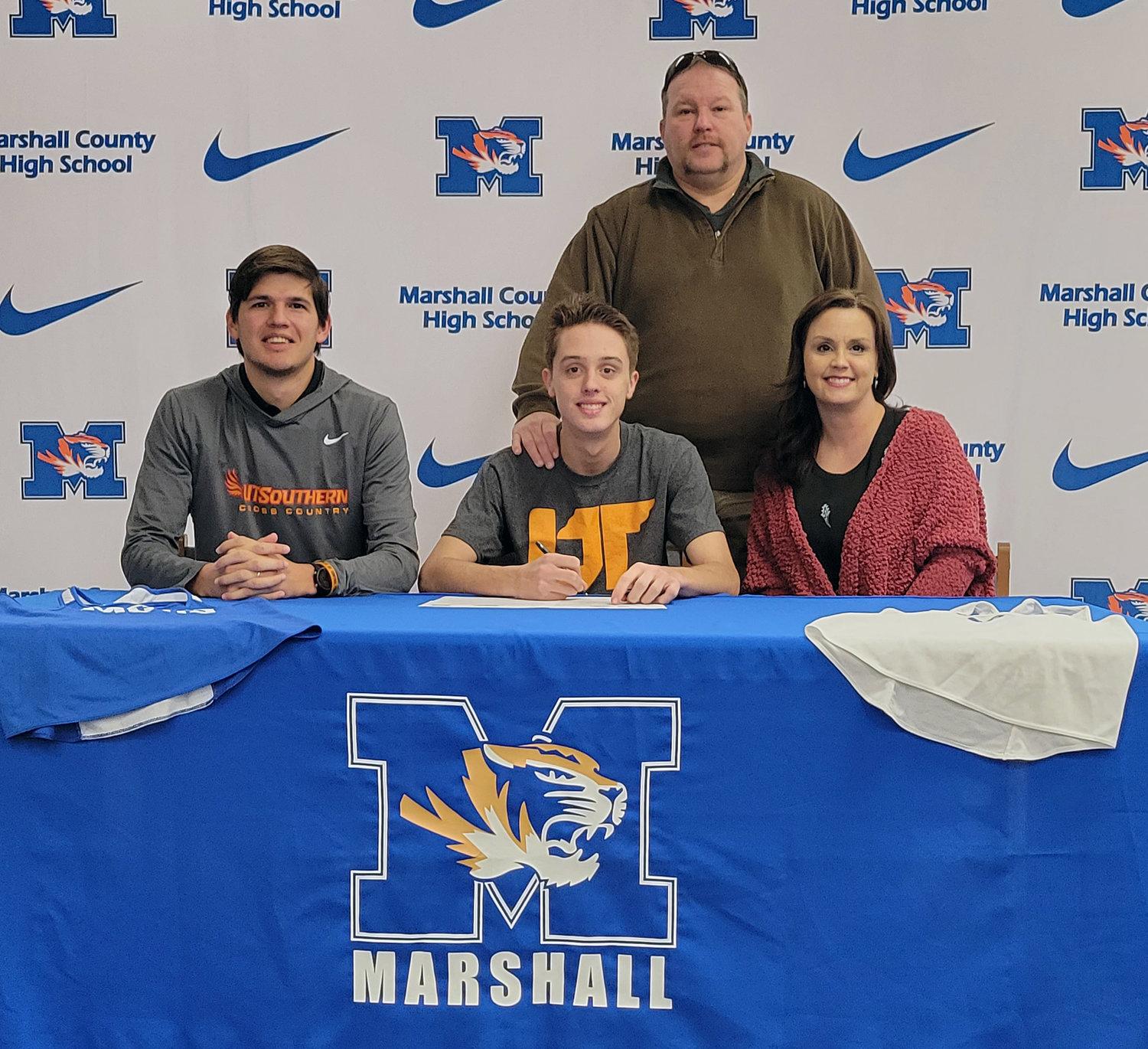 Krew Capps signs his letter of intent to continue his running career at UT-Southern.
Tribune Photo by Chris Siers 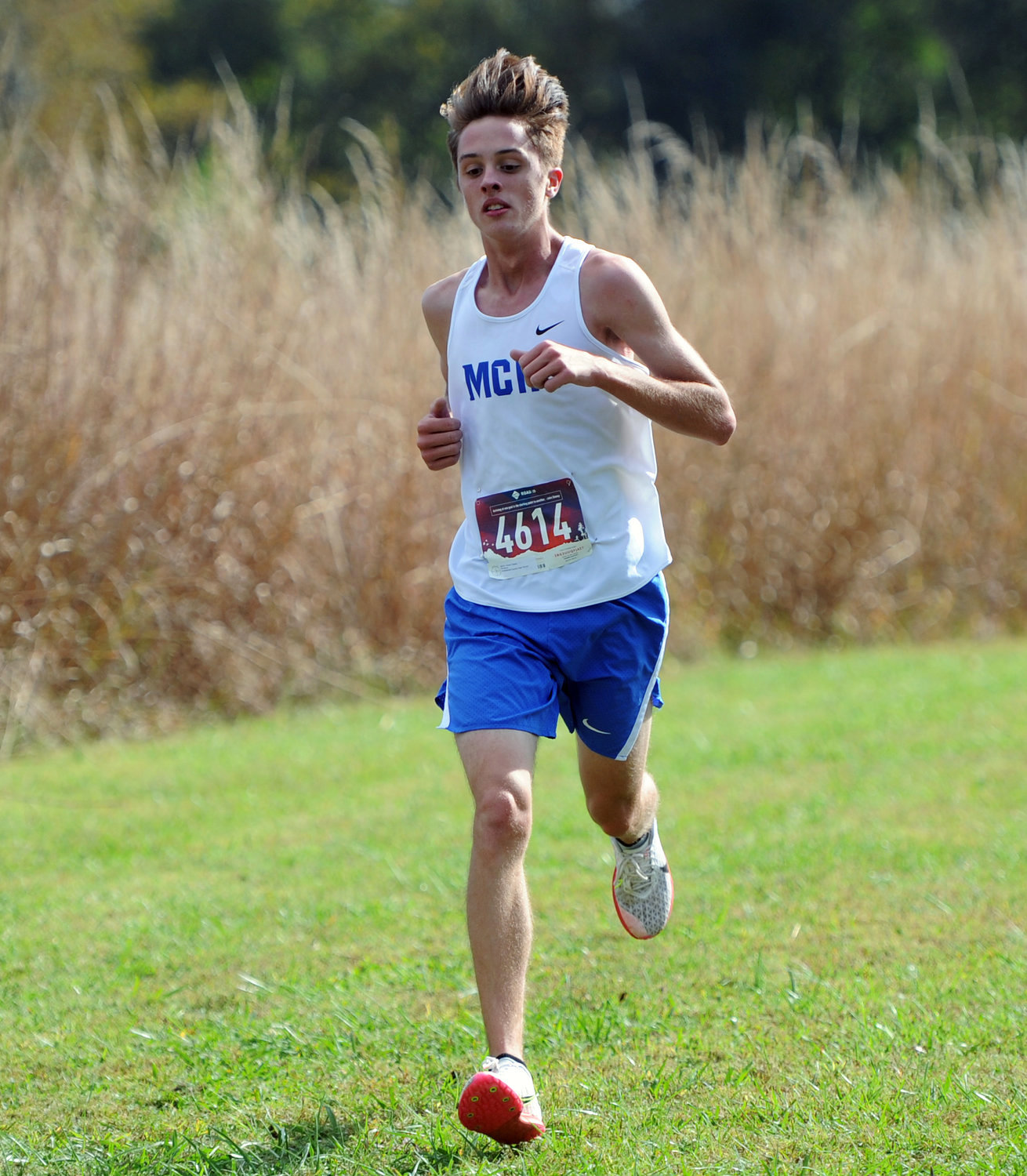 A history-making season that saw both Marshall County cross country teams qualify for the TSSAA Class A-AA state meet also saw a pair of senior leaders sign their letters of intent to continue their college career.
Krew Capps will join teammate Lydia Molina and will attend UT-Southern in the fall.
“It’s pretty exciting. I didn’t know I was going to do cross country in college, but Coach (Justin) Watson gave me a chance. Now that I have the chance to do it, I’m really excited,” Capps said.
Capps, along with Molina, were the senior leaders that led the Marshall County to the state meet and while their efforts on the course typically had the runners as the top finishers for the school, it was their leadership qualities that made their impact on the program.
“They meant a lot. Both of them were our No. 1 runner. They’re a great loss for our team, but I know our underclassmen are ready to step up and fill their shoes. They’re great leaders. They were always at practice and always did everything they were supposed to do. They went above and beyond outside of practice and were just role models for our kids within our building, too,” Marshall County coach Heather Denton said.
UT-Southern coach Justin Watson was also excited to sign the Marshall County duo and have them be an immediate impact on the Firebird programs.
For Capps, his path that got him started may have been a rocky one, but eventually the sport became his calling which landed his career path to college.
“It was seventh grade year. I was a trouble kid and my punishment was running. I realized I was good at it and I kept going. Six years later, it’s just my passion,” he said.
That passion led him to a 44th-place finish in the state meet, which he completed in 17:57.
Capps turned in a third-place Region 6 A-AA finish in 17:57 as well.
While runners typically can point to a specific race as their favorite running memory, Capps says the way the Tigers came together to qualify for the state meet was the most memorable to him.
“This season, it was making state for the first time in school history. It was amazing really. The whole season, the whole team put in a lot of work for it and once we got there, it was just a great experience,” he said.
In addition to joining Molina, former Tiger cross country runner Zach Shepard also runs for UT-Southern.
“It’s very exciting for the program. Zach Shepard signed last year and they’re going to the same school he went to.
“It builds up the program and gives us some momentum within our school to hopefully help us recruit the halls. That’s our goal for next year is to get some more kids involved in our program,” Denton said.
For Watson, finding the Marshall County duo was a perfect fit for his roster in Pulaski.
“They fit like a glove. Our teams are small and young. Typically, you don’t expect freshmen to come in and be front runners, but that’s exactly what I expect out of them,” he said.
While runners compete in 5K races in high school, that distance jumps up to 8K and 10K races at the collegiate level—a challenge Capps is looking forward to.
“It’s a lot more running, but I’m ready for it,” he said.
Capps plans on studying criminal justice and hopes to one day become a detective.