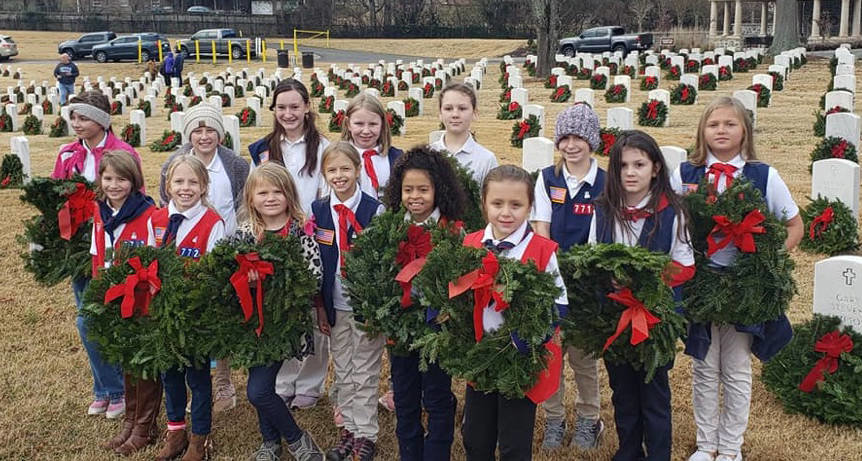 In their second year as a troop, the girls from Lewisburg’s American Heritage Girls troop participated in the 12th annual Wreaths Across America day at Nashville’s National Cemetery on Saturday, Dec. 14. The girls and their families, along with other volunteers, groups, and veterans, laid memorial wreaths on the graves of the veterans buried there and took a moment to say each name as a way to remember them and show honor for their service. Memorial wreaths were displayed for each branch of service and the more than 81,000 POW-MIAs.

Re-enactors in costume, an ROTC unit, members of law enforcement, active and retired military personnel, a Nashville AHG troop, and volunteers gathered for a brief ceremony that included the playing of the National Anthem and Taps prior to the wreath laying along with the words of President Reagan that “Freedom is never more than one generation away from extinction. We didn’t pass it to our children in the bloodstream. It must be fought for, protected, and handed on for them to do the same.”

“Remember, Honor, and Teach” is the mission of WAA, and their efforts result in nearly 2 million wreaths being placed at over 1,600 locations in all 50 states and cemeteries around the world.

In Nashville, 1,464 wreaths were placed at the cemetery which contains over 36,000 veteran graves, and volunteers hope to reach the goal of total coverage in the coming years. Groups such as AHG can team up with WAA by connecting with individuals and businesses who want to sponsor wreaths for the ceremonies.

Sponsoring wreaths can be done online or by phone throughout the year for next year’s ceremony, and wreath sponsorship can even be a gift option for the holidays. To support WAA and the local AHG troop at the same time, go to https://wreathsacrossamerica.org/pages/161385.

If you’d like to learn more about American Heritage Girls, a Christ-centered, service-based, leadership building organization, or to connect with the local troop, go to https://americanheritagegirls.org.

Local American Heritage Girls participated in the Wreaths Across America program in December, placing wreaths on the graves of veterans in the Nashville National Cemetery.