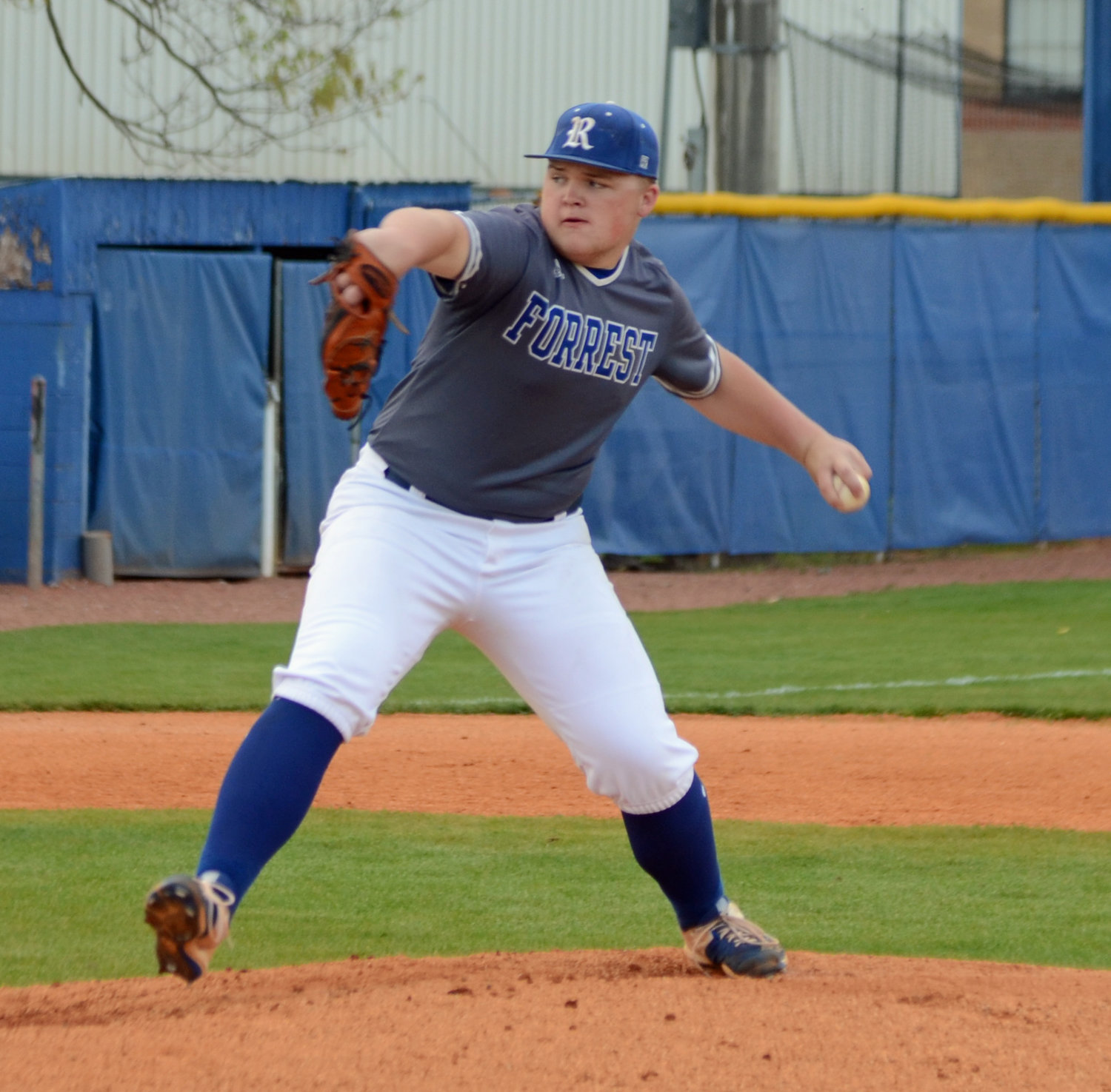 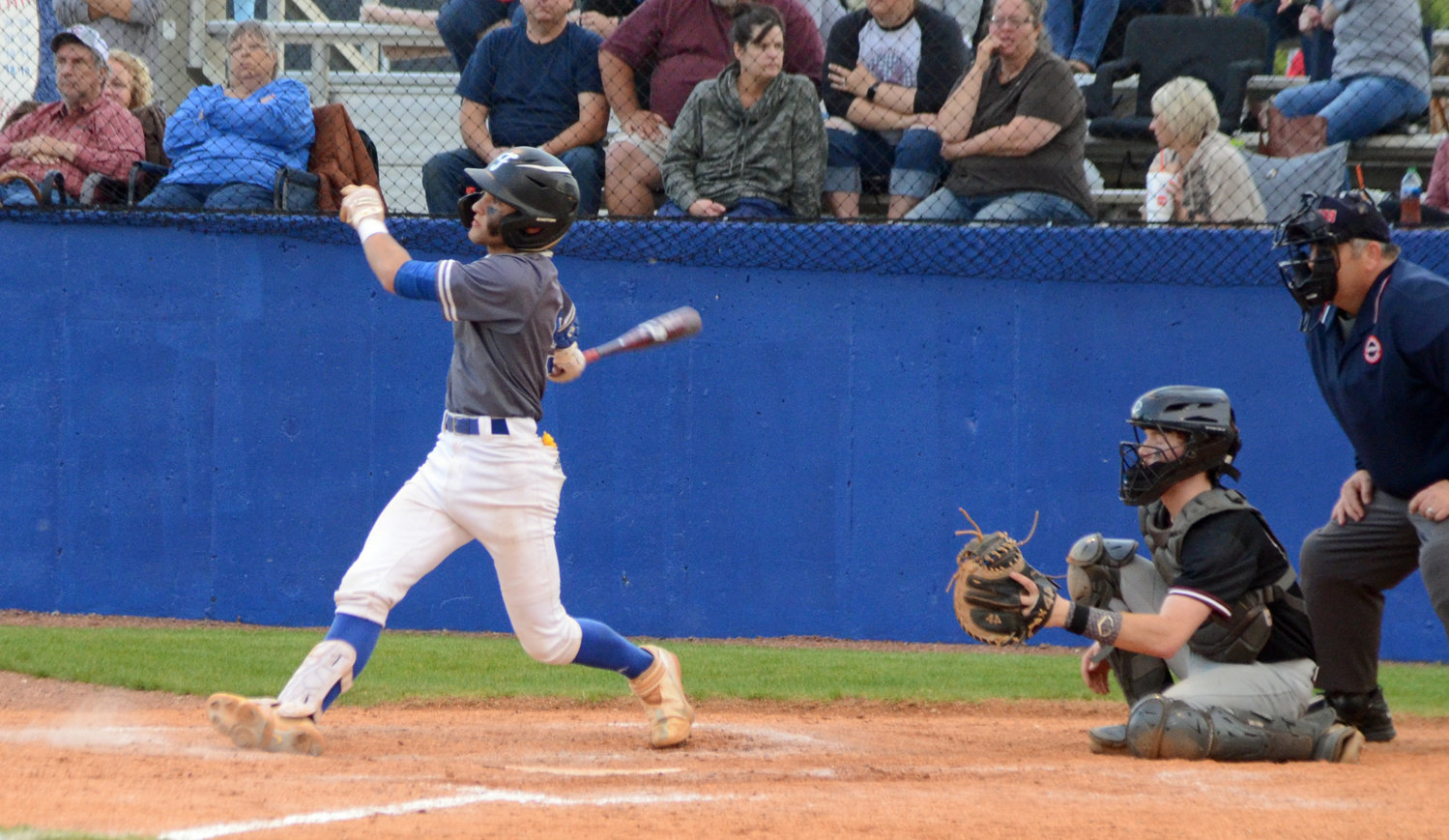 Camden Vaughn, who went 2-for-3 with an RBI and two runs scored, nails a leadoff triple in the bottom of the fifth inning before coming around to score the tying run.
Previous Next
Posted Friday, April 22, 2022 7:54 am

“That was just mental lapses on our part and I take responsibility for that making sure our guys stay in check and stay in the moment,” Burkett said. “Stay passionate and have all that energy in the world, but also don’t lose your composure too much, don’t be too hyped where forget to do the basic things and those basic things got us beat tonight.””
Forrest coach Andy Burkett
By Anthony S. Puca Sports Writer

The Forrest Rockets came into Thursday night’s home matchup versus longtime rival Eagleville riding a four-game winning streak while the Eagles had lost just two games all season and had beaten Chapel Hill 15-2 earlier in the season.

Eagleville came out fast, but the Rockets battled back to tie, only to see the game slip away with some tough breaks and a few base running miscues that led to a 9-5 loss.

“As intense as that was with a great opponent like them (Eagleville), especially with the record they have and all the good teams they have beaten, it disappoints me because we definitely lost our focus in the sixth inning and at the end of the day that is what cost us the ballgame,” Forrest coach Andy Burkett said. “But, I am proud of the way that our guys fought considering the way things went the first time we played these guys, I’ll definitely take a hard fought loss versus a good Eagleville team.”

Early on it looked like the Eagles would run away with the game as they scored three first innings, highlighted by a two-run homerun by Tanner Mabry.

The Rockets were not going to let the visitor’s to pull away this time as they came up with a pair of runs in the bottom of the first thanks to a two-out error that scored a run and extended the inning that cost Eagleville another tally on a Braden Bowyer RBI base hit.

The Eagles came up with an unearned run in the top of the second to make 4-2, but once again Forrest came back on a run-scoring single by Camden Vaughn to cut the deficit back to one run.

Bowyer settled in on the mound and shutout the Eagles over the next four innings, allowing just a pair of Eagleville baserunners.

Forrest left one runner on base in the third inning and had a runner thrown out trying to steal in the bottom of the fourth.

Bowyer let one Eagleville batter reach base in the top of the fifth on a hit batsman, but escaped on a fly ball to Carter Walk in left field.

Vaughn tripled in to the right/center field gap to lead off the bottom of the fifth inning and Riley Durbin walked and stole second base.

Brennan Mealer knocked in Vaughn with a sacrifice fly and Kasen Fuller followed with a walk and was replaced on first base by Andrew Timmons.

The Rockets sent Timmons on a steal to second to try to score Durbin from third, but the play backfired and Timmons was thrown out.

A ground ball back to the box ended the inning with the game tied at 4-4.

Bowyer was strong in the top of the sixth inning, setting down Eagleville 1-2-3 and Kain Moses led off the bottom of the frame with a base hit.

Walk came up and laid down a bunt that was fielded by the Eagleville catcher who threw to first for the out as Moses turned at second and tried to go to third base, but he was gunned down and the inning ended on a ground ball out.

“That was just mental lapses on our part and I take responsibility for that making sure our guys stay in check and stay in the moment,” Burkett said. “Stay passionate and have all that energy in the world, but also don’t lose your composure too much, don’t be too hyped where forget to do the basic things and those basic things got us beat tonight.”

“We will re-examine some things just a little bit, but at the end of the day we fought hard versus a good opponent and you can’t ask for much more in trying to get ready for the postseason.”

Braden Burns led off the top of the seventh with a base hit before Bowyer got the first out on a strikeout.

Bowyer and the Rockets were struck with some bad luck as the next two Eagleville batters hit shots off Bowyer and the bases were loaded.

“If he (Bowyer) is able to glove both of those, it’s a tie ballgame and he only gives up four runs,” Birkett said. “You have to be proud of him, he showed his entire repertoire tonight, he probably threw 30 something change ups and threw 15-to-16 breaking balls and he was working in, he was working out and up and down. That lineup is super aggressive and all we wanted to do was keep them on their toes and keep them guessing and he did that, so I’m super proud of his effort.”

Burns came home with the go-ahead run on a balk on Bowyer and Nathan Brewer followed with a sacrifice fly RBI to make it 6-4.

Mabry walked and then another balk made it 7-4 before Colton Daniel drilled a two-run homerun to put the Eagles in control at 9-4.

Preston Gentry led off the bottom of the seventh with a base hit and went to second on a ground ball out.

After a strikeout, Mealer knocked in Gentry with a base hit, but the game ended on a ground ball to third base.

Forrest travels to Grundy County (2-12) on Monday to resume a game delayed by rain with the Rockets leading 9-0 in the third inning.

Forrest finishes up the road trip next Thursday at Summertown (12-10).