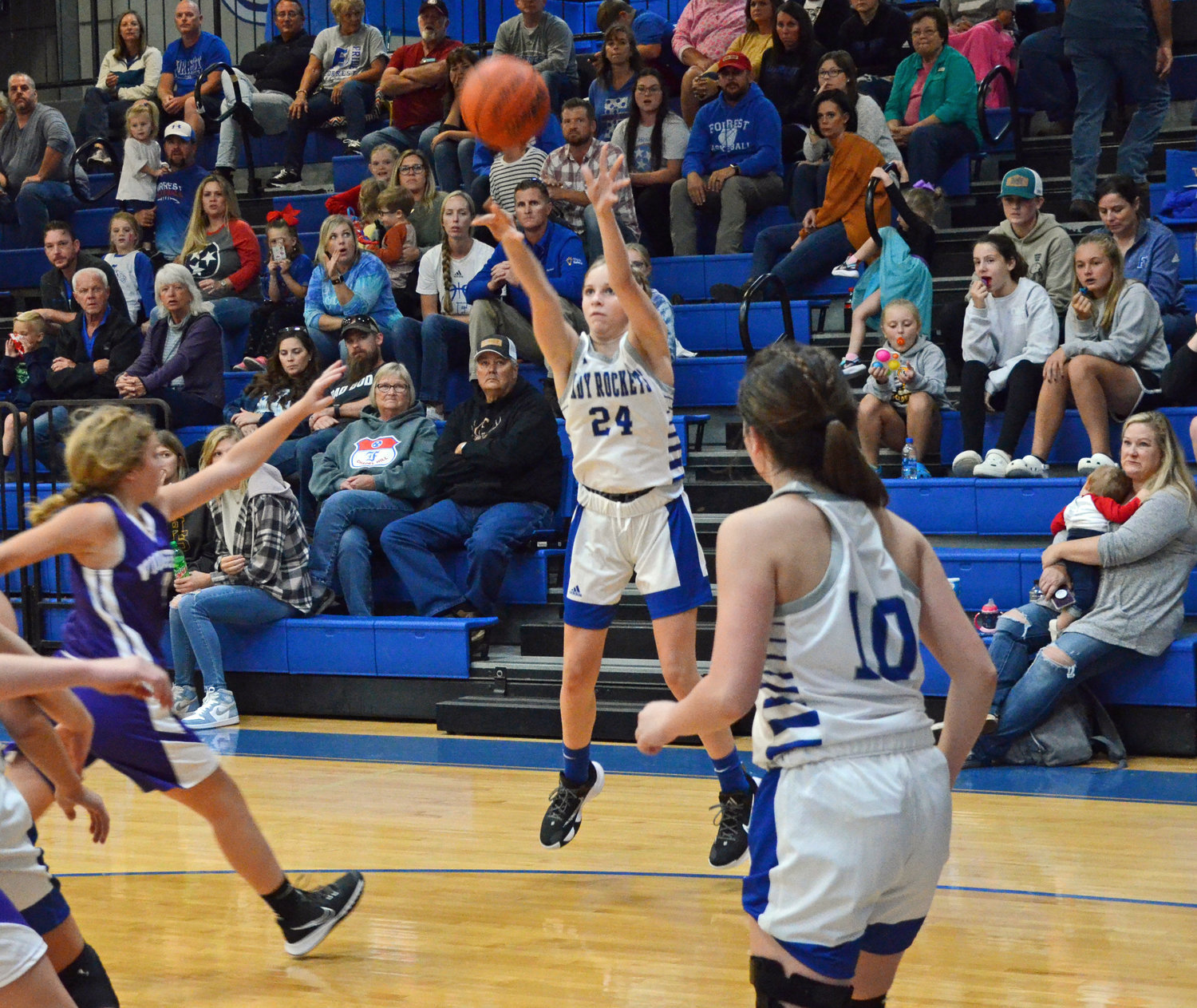 Millie Swift (24) launches a second half 3-pointer for the Lady Rockets, who lost 26-24 to Community on a last second long bomb in the first round of the World Tournament Monday night at Chapel Hill.
Tribune photos by Anthony S. Puca 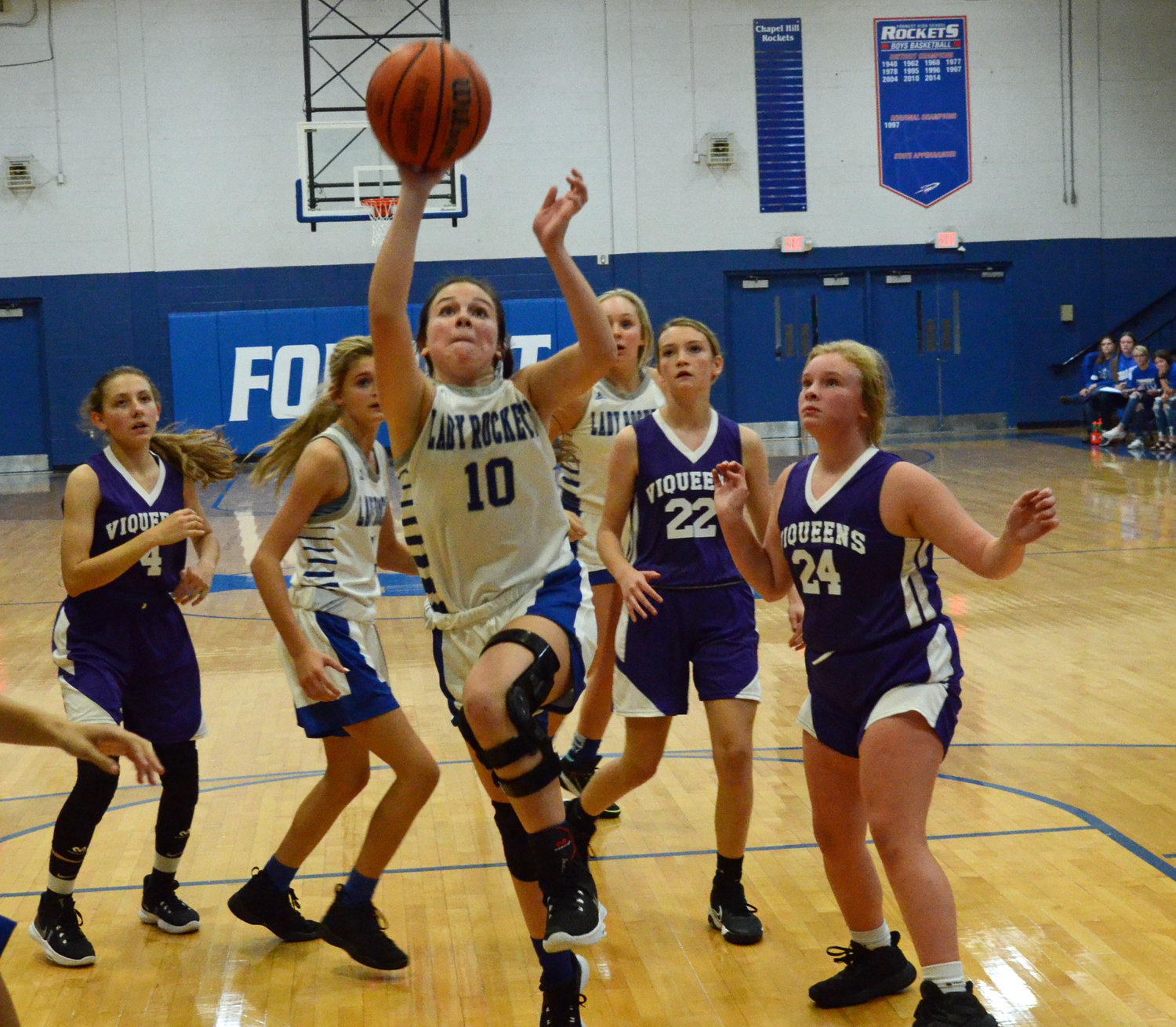 Camreigh Warner (10) drives down the lane for two points in the second quarter for the Lady Rockets.
Previous Next
Posted Wednesday, October 20, 2021 10:07 am
By Anthony S. Puca Sports Writer

The Forrest Lady Rockets opened up the 2021 season at home versus Community in the first round of the 58th Annual World Tournament in Chapel Hill and staged a wild comeback before falling 26-24 on a last second 3-pointer by Brailey Whitehead.

The Viqueens almost ran away and hid, shutting out the Lady Rockets 13-0 in the first quarter behind six points by Whitehead, who led all scorers in the ballgame with 12 points.

Forrest finally scored on a basket by Adisyn Howes with 5:43 remaining in the first half and after a Viqueens’ missed field goal, Camreigh Warner made it a 13-4 contest.

Gracie Daniel made both ends of a one-and-one opportunity at the free throw line late in the quarter to put the Viqueens up by double digits at 17-7 before Forrest’s Kaylin Pope scored the final bucket of the first half and the Lady Rockets trailed 17-9 at the break.

Both squads went cold to begin the second half until FMS scored five straight points on a Maddy Ille basket, followed by a long 3-pointer by Pope to slice Community’s lead to three points at 17-14 late in the period.

Once again, the Viqueens held them off with Whitehead scoring the next three points, but a Millie Swift 3-pointer near the buzzer made it a 20-17 contest, entering the fourth quarter.

Warner drilled a 3-pointer, tying the game at 20-20 at the 5:15 mark of the fourth quarter and after a Community missed shot, Swift scored to give the Lady Rockets their first lead of the game.

A Viqueens’ turnover led to a Pope basket to make it 24-20 with four minutes to go in the contest.

Jayla Mangrum canned a pair of free throws for Community to make it a two-point game and moments later, the Viqueens had a chance to tie the game from the free throw line, but could not convert even with two extra shots for a pair of lane violations by the Lady Rockets.

Forrest went cold from the field and dodged another bullet when Community made just one of two free throws to cut the lead to one point at 24-23 with 23.8 seconds left in the game.

After a timeout, Forrest missed and the Viqueens called timeout with 12.4 seconds left in the game.

Community passed the ball twice and the second one went to Whitehead in the corner where she tossed up a rainbow that went straight through the hoop for three points and a 26-24 lead with 2.3 seconds remaining in the contest.

Forrest was unable to get a last chance shot off and were eliminated from the tournament.

The Lady Rockets will be back on the hardcourt at Lewisburg Middle School on Monday for a big intra-county rivalry game versus the Tigerettes.

Community takes on Cascade in the second round on Thursday with the girls World Tournament title game set for 5:40 p.m. Saturday at Chapel Hill.