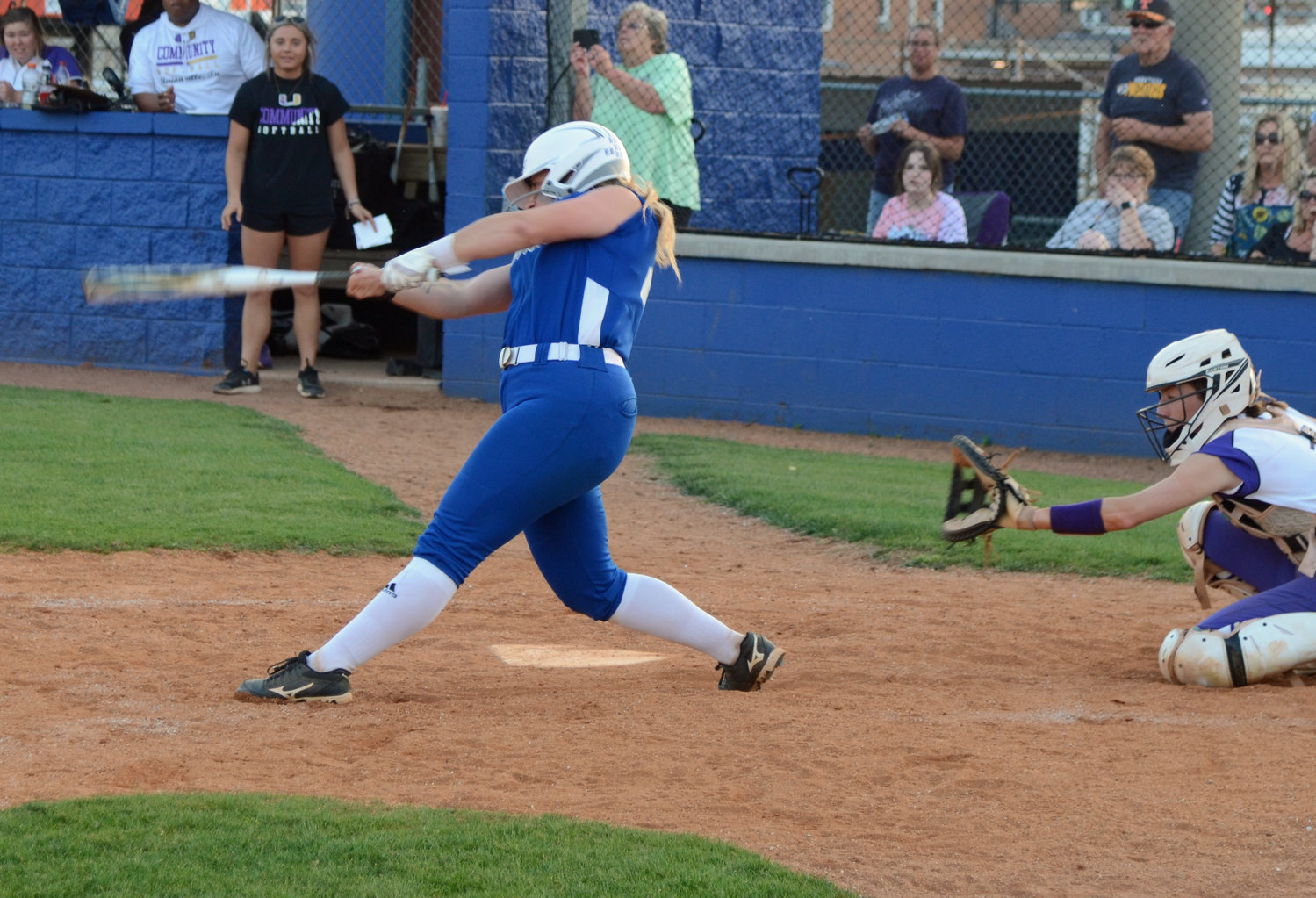 Leslie Bartoli delivers the game-tying single in the bottom of the seventh inning for the Lady Rockets, who came back to beat Community 5-4 in 10 innings Tuesday night in the second round of the District 7-AA Tournament at Chapel Hill.
Tribune photos by Anthony S. Puca 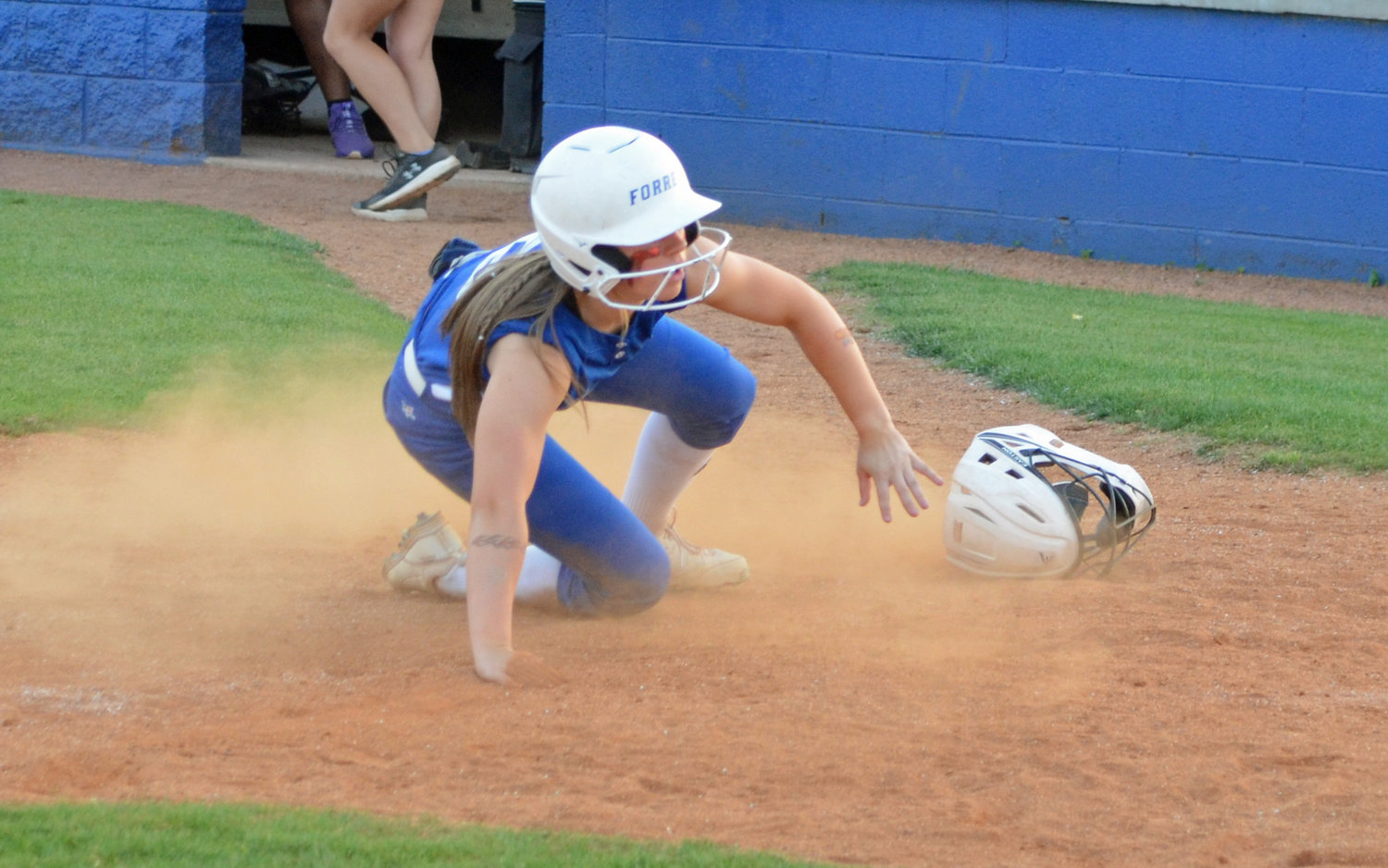 Emory Hall scores the game tying run in the bottom of the seventh inning. 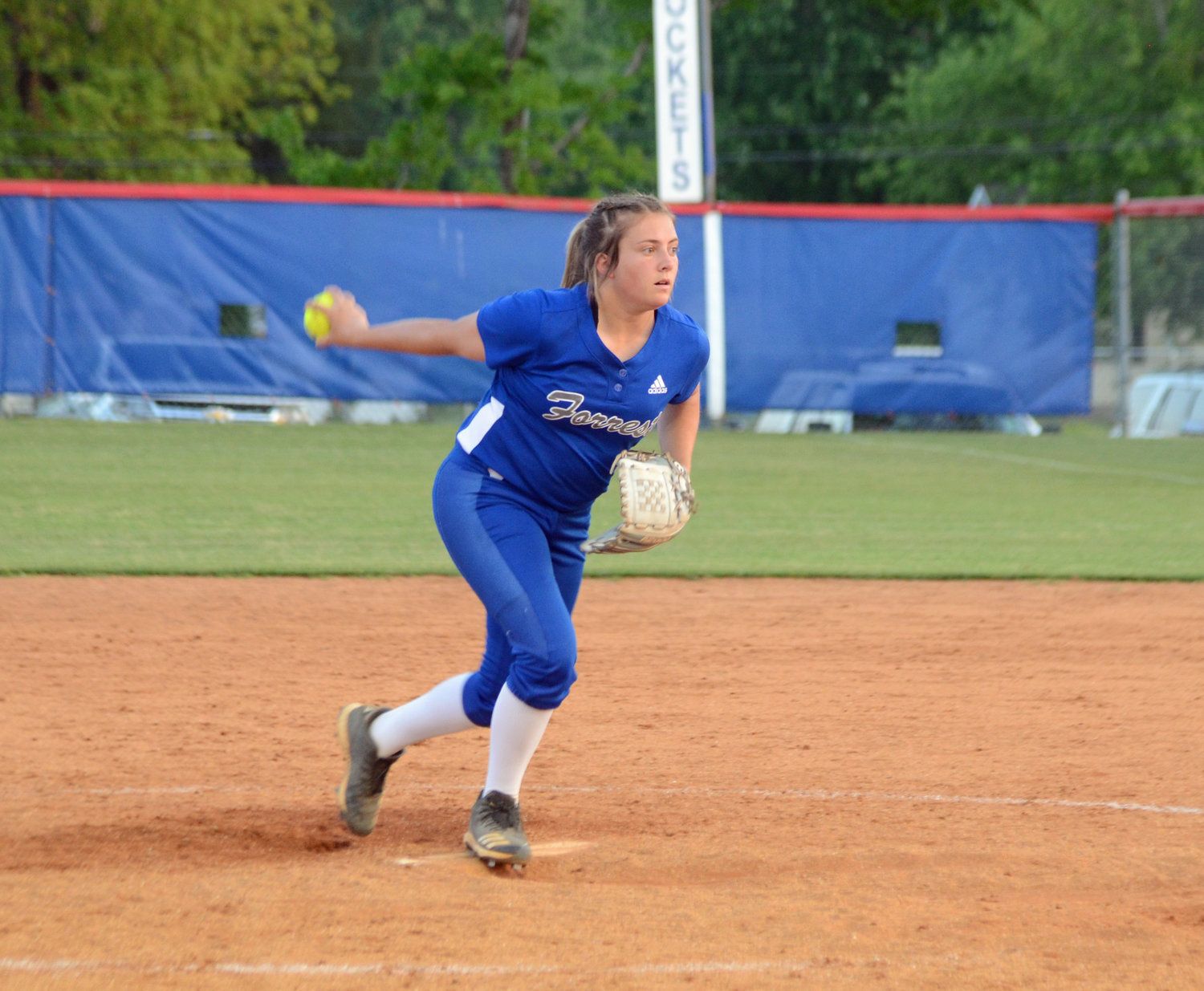 Julie Williams picked up the win in the circle for the Lady Rockets, tossing four shutout innings to end the game. 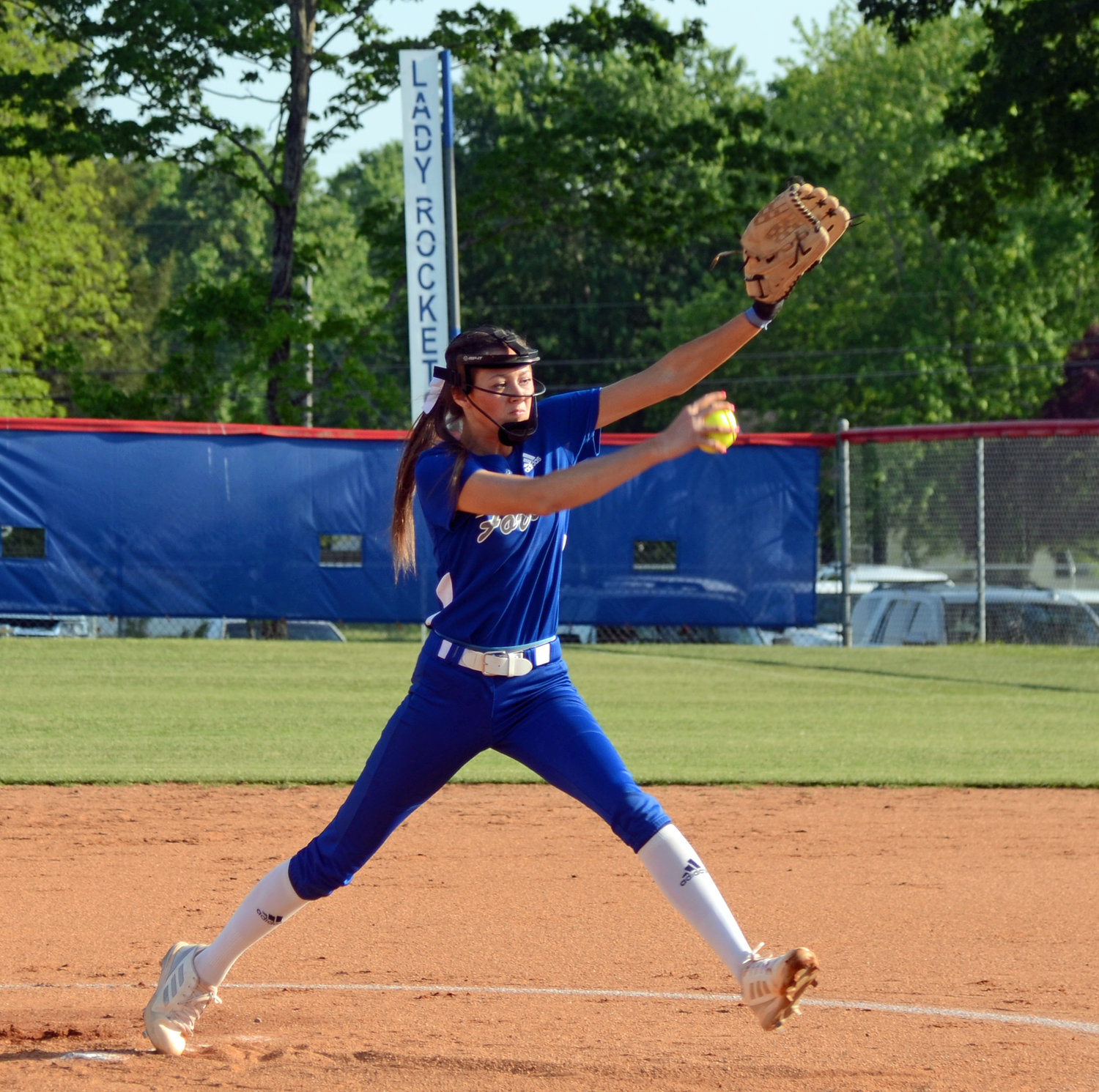 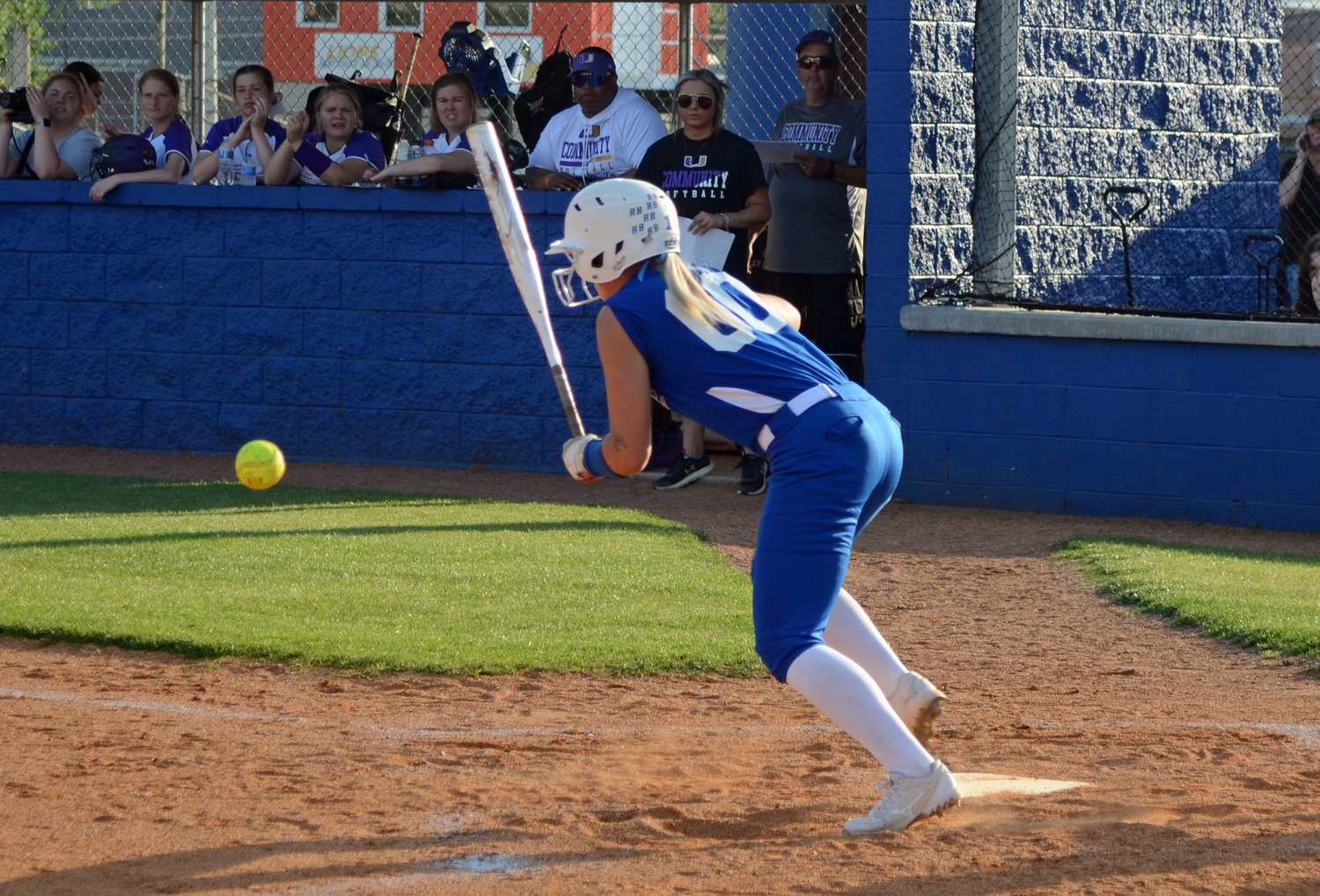 Abby Ferguson executes the squeeze bunt RBI to make it 1-0 in the third inning. 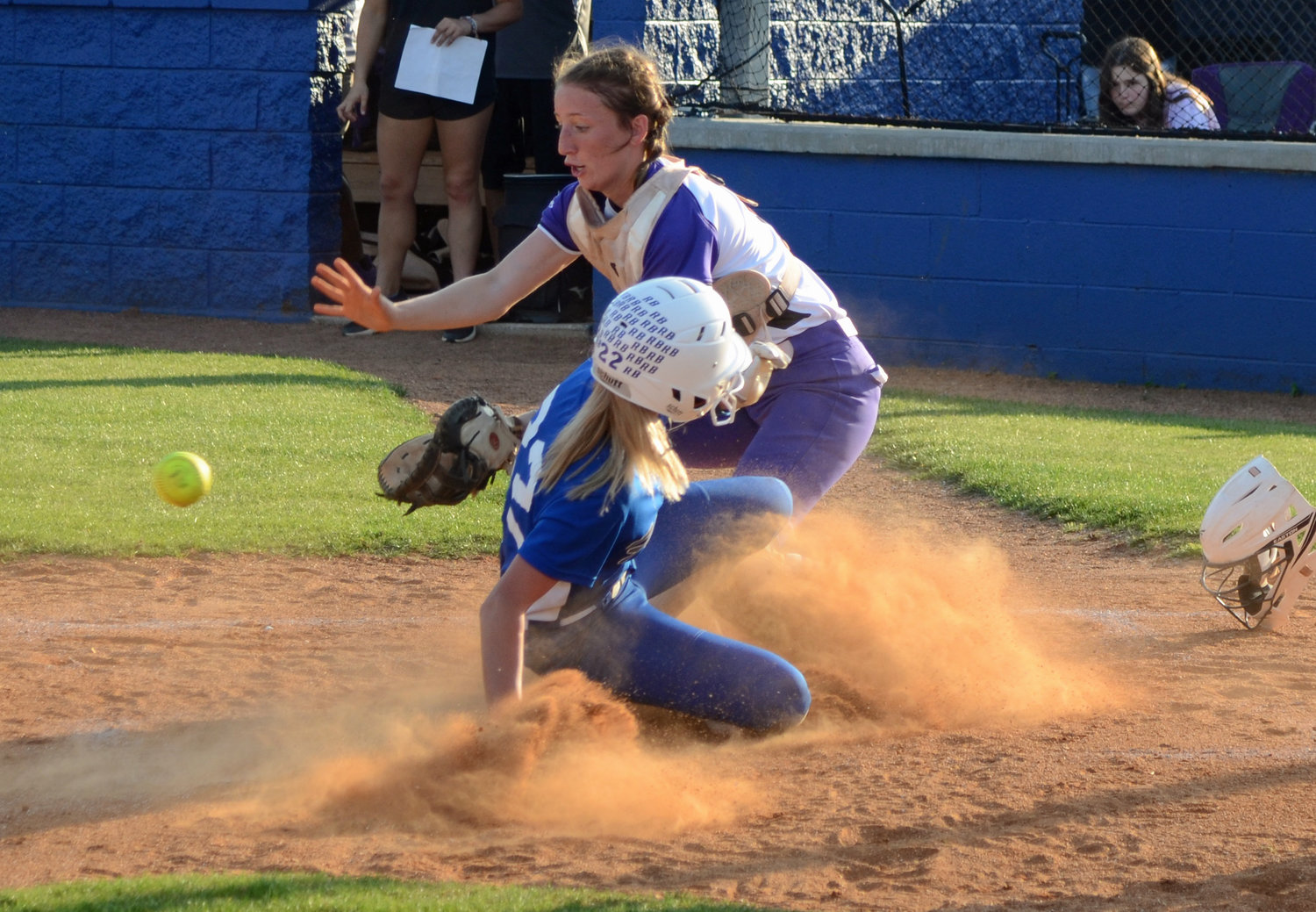 Macyn Kirby scores on a squeeze bunt RBI by Abby Ferguson in the third inning.
Previous Next
Posted Wednesday, May 11, 2022 6:46 am

The four-time state champion Forrest Lady Rockets needed a miracle in Tuesday night’s second round District 7-AA Tournament game versus a Community team they had beaten 49 straight times and somehow they got it, beating the Viqueens 5-4 in 10 innings at the Field of Dreams in Chapel Hill.

“It wasn’t pretty, but we are proud of the grit and the fight that they showed, they could have laid down, but they found a way to keep fighting,” Forrest coach Shelby Lightfoot said. “Hats off to Community, we knew they would be tough. They hit the ball and made us make plays and it put a lot of pressure on us and it could have gone either way.”

Abby Ferguson came home with the winning run without a Forrest hit in the bottom of the 10th inning as the sophomore center fielder was placed on second base to start the stanza under the international tiebreaker rule.

With pinch-hitter Emory Hall at the plate, Taylor Wessner threw the first pitch of the bottom of the 10th in the dirt and Ferguson took off for third base.

The Community third baseman mishandled the throw from the catcher and the ball caromed away as Ferguson took off for home and she was called safe by the home plate umpire, who ruled that the catcher had blocked the plate before gaining possession of the ball.

“When the ball went on the ground I went to third because I knew I had to go for it because we had to score,” Ferguson said. “When I saw it past the third baseman I had to go, I thought he was going to call me out, but she was blocking the plate.”

The Viqueens out-hit Forrest 13-to-9 in the contest and led 4-3 with the Lady Rockets down to their last out in the bottom of the seventh inning when sophomore Leslie Bartoli delivered a game tying single.

“I knew there was a lot of pressure on me, so I just decided to stay calm and make the most of it,” Bartoli said. “My teammates told me she was throwing inside a lot and I looked for a pitch I liked and kept my hands inside and nailed it.”

Bartoli also nailed an RBI double in the bottom of the sixth to make it a 4-2 ballgame.

Junior Julie Williams picked up the win in the circle in relief of Ella Chilton, who tossed the first six innings and gave up four runs (two earned) on nine hits.

Williams blanked the Viqueens the rest of the way, giving up four hits while striking out four and walking two Community batters.

“We were trying to strategically play some pitching here and there,” Lightfoot said. “We thought Ella did a good job, they just got on her a little bit and then we made some errors and they kept on getting on her. Julie came in after that big inning and really shut the door and gave us a chance to win.”

The Lady Rockets struggled the entire game trying to group hits together off the Community freshman pitcher Wessner, who suffered the tough loss in the circle.

Forrest opened the scoring in the bottom of the third inning as Macyn Kirby reached on a leadoff error and proceeded to steal second base.

Chilton kept the Viqueens off the scoreboard over the first five innings but it wasn’t easy as Community left seven runners stranded before finally breaking through in the top of the sixth inning.

Haley Mitchell scorched a one-out double to get things started for the Viqueens and Hailey Farrar followed with a base hit.

Chloe West reached on a Forrest error that scored Mitchell and two more runs came home on a wild pitch and a throwing error to make it 3-1.

Another Forrest error extended the inning and Abby Brown made it 4-1 with an RBI single to left field.

Bartoli’s double cut the Community lead in half in the home half of the frame and Williams came to the circle to start the seventh inning and worked her way out of a bases loaded, two-out jam.

Warren singled with one out in the bottom of the seventh inning and after a groundout, Carli Warner kept the game alive when she reached on a Community error that scored Warren.

Emory Hall came in to run for Warner and she trotted home from second base on Bartoli’s game tying single.

“We know she (Leslie) can hit, she has already hit for us in some big situations,” Lightfoot said. “I feel like after tonight, you have to put her in the lineup. I think it is that little bit of hunger that she wants to come in and do well for her team. She has been having great BP’s, so everything she has been putting in in practice has paid off.”

Wessner got out of the inning and the Viqueens left a base runner stranded in the top of the eighth.

Forrest could not muster a run in the home half of the inning and Williams set down Community 1-2-3 in the top of the ninth, including three changeup strikes for the third out.

Forrest was retired on three straight fly balls in the bottom of the ninth and Farrar took second base to begin the top of the 10th inning and the start of the tiebreaker rule.

After a pop-up and grounder sent Farrar to third, Abby Murrill was intentionally walked and the base got loaded when Abby Brown walked.

Williams induced a fly ball out to Maggie Daughrity in right field to end the top half of the inning and in the home half of the10th, Lady Luck showed up in Chapel Hill as the Lady Rockets (22-10) escaped with the win to advance to Thursday night’s district title game at Forrest.

Community (22-9-1) takes on Cascade in tonight’s loser bracket final and whoever wins that game will have beat Forrest twice to win the district title.

“Tomorrow we don’t want to overdo it and come in and try to fix everything that is not working,” Lightfoot said. “We are just going to come in and have a hitting day and try for some groundball action and come back strong on Thursday.”