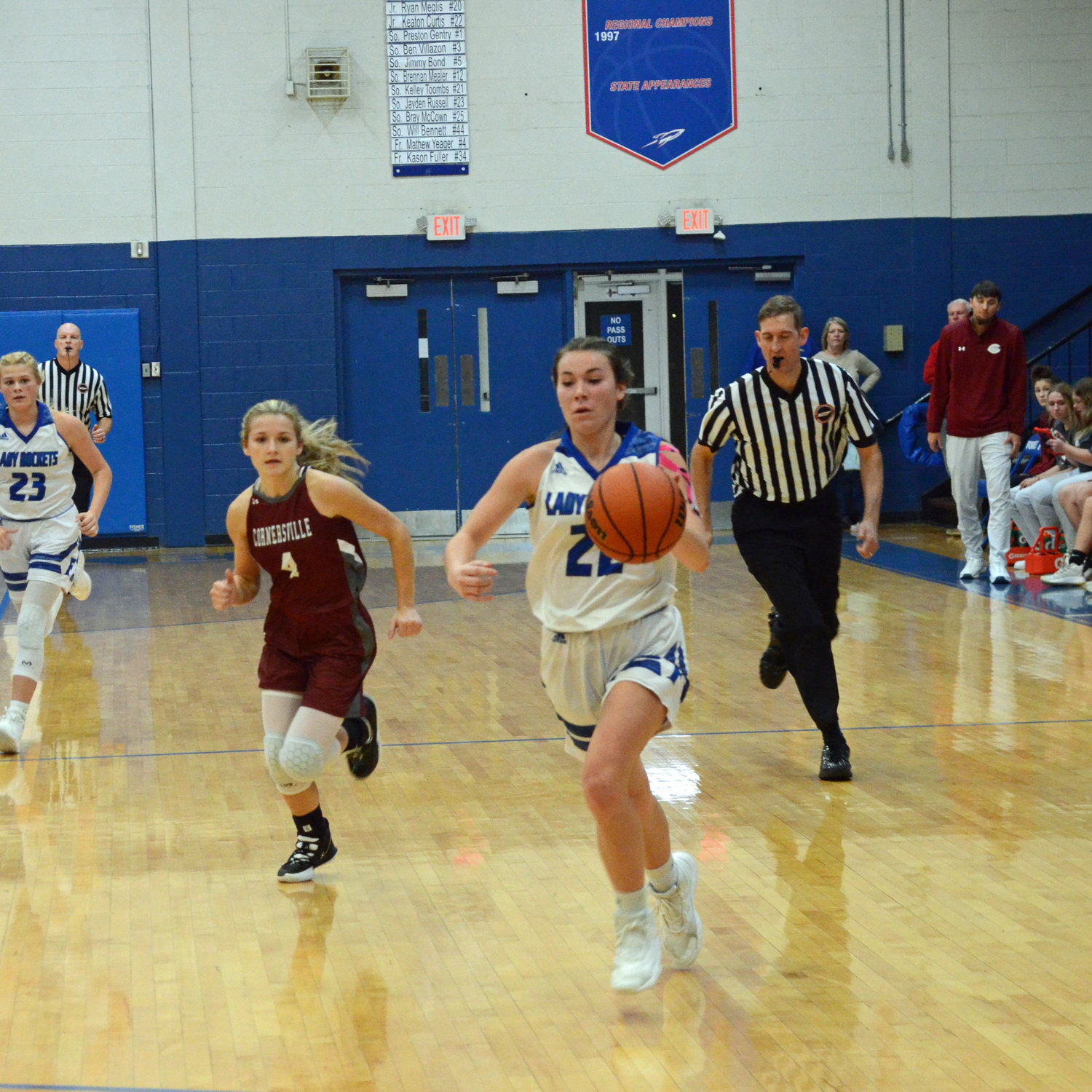 Forrest senior Addison Bunty (22) had a career-high 20 points with six steal and scores and a pair of 3-pointers in Forrest’s 53-31 opening season win over Cornersville Tuesday night at Chapel Hill.
Tribune Photos by Anthony S. Puca 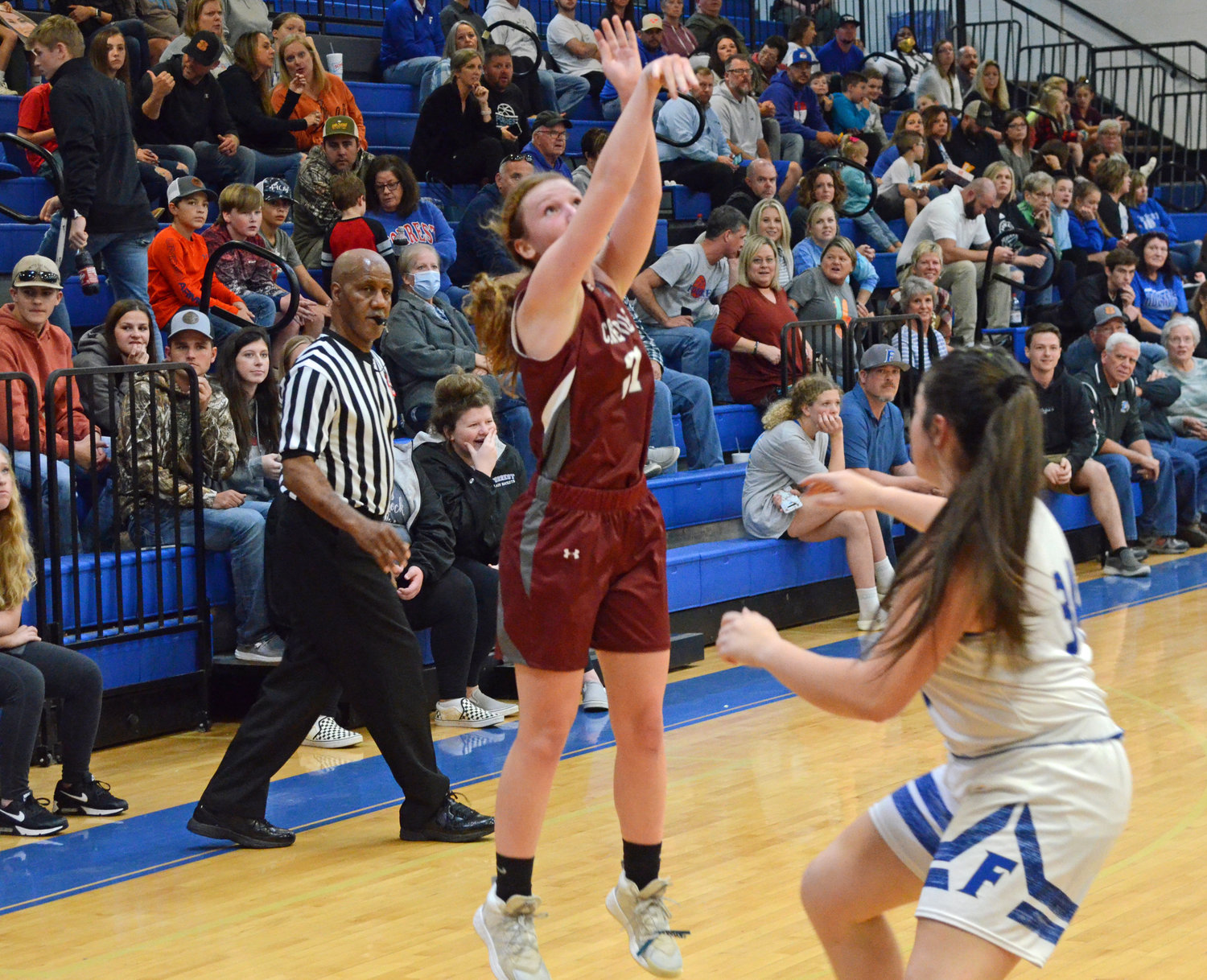 Cornersville’s Anna Wood (21) led the Lady Bulldogs in the scoring column with 10 points, including a pair of 3-pointers. 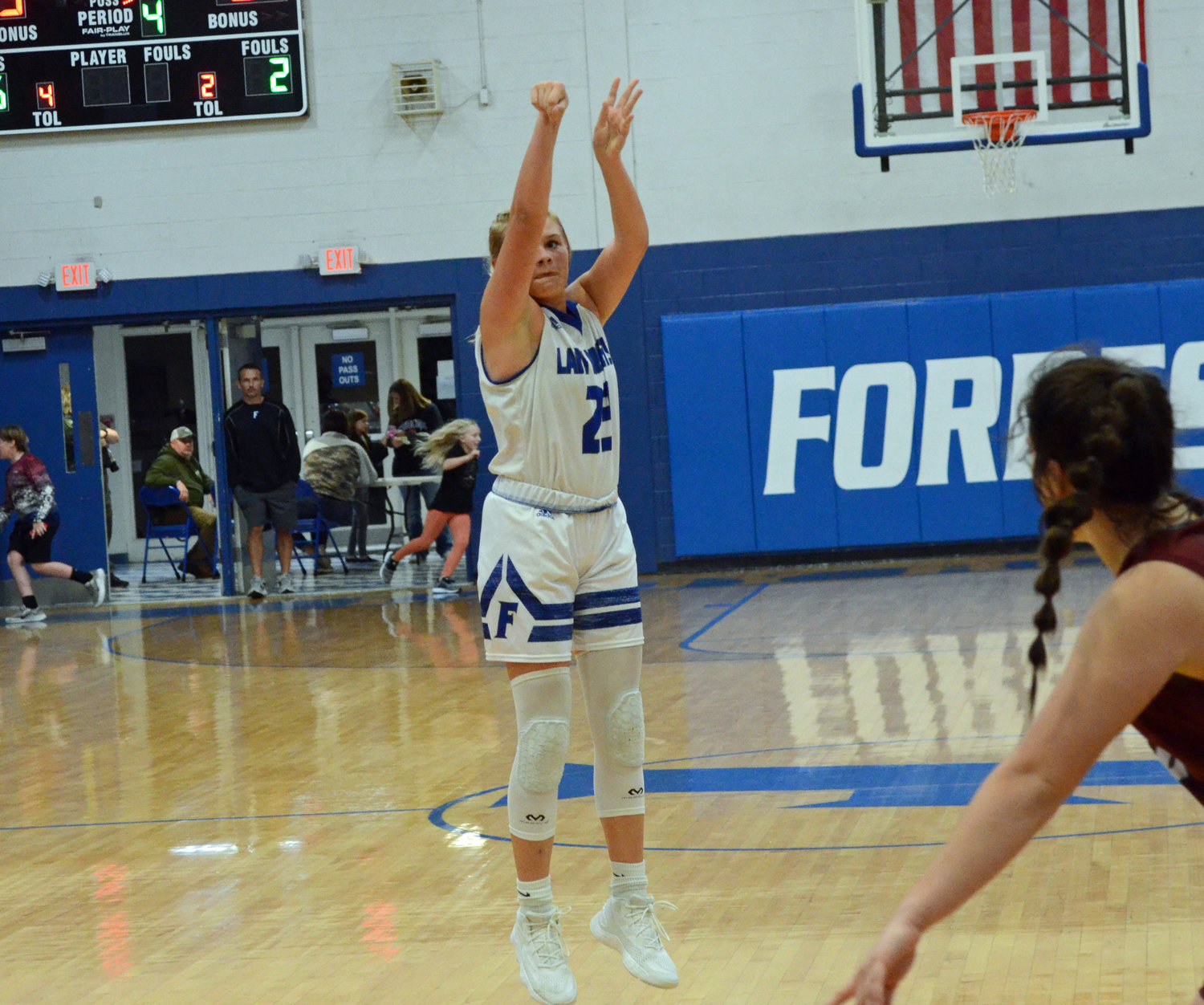 Forrest freshman Kinslee Inlow (23) nails one of her three 3-pointers in the contest. 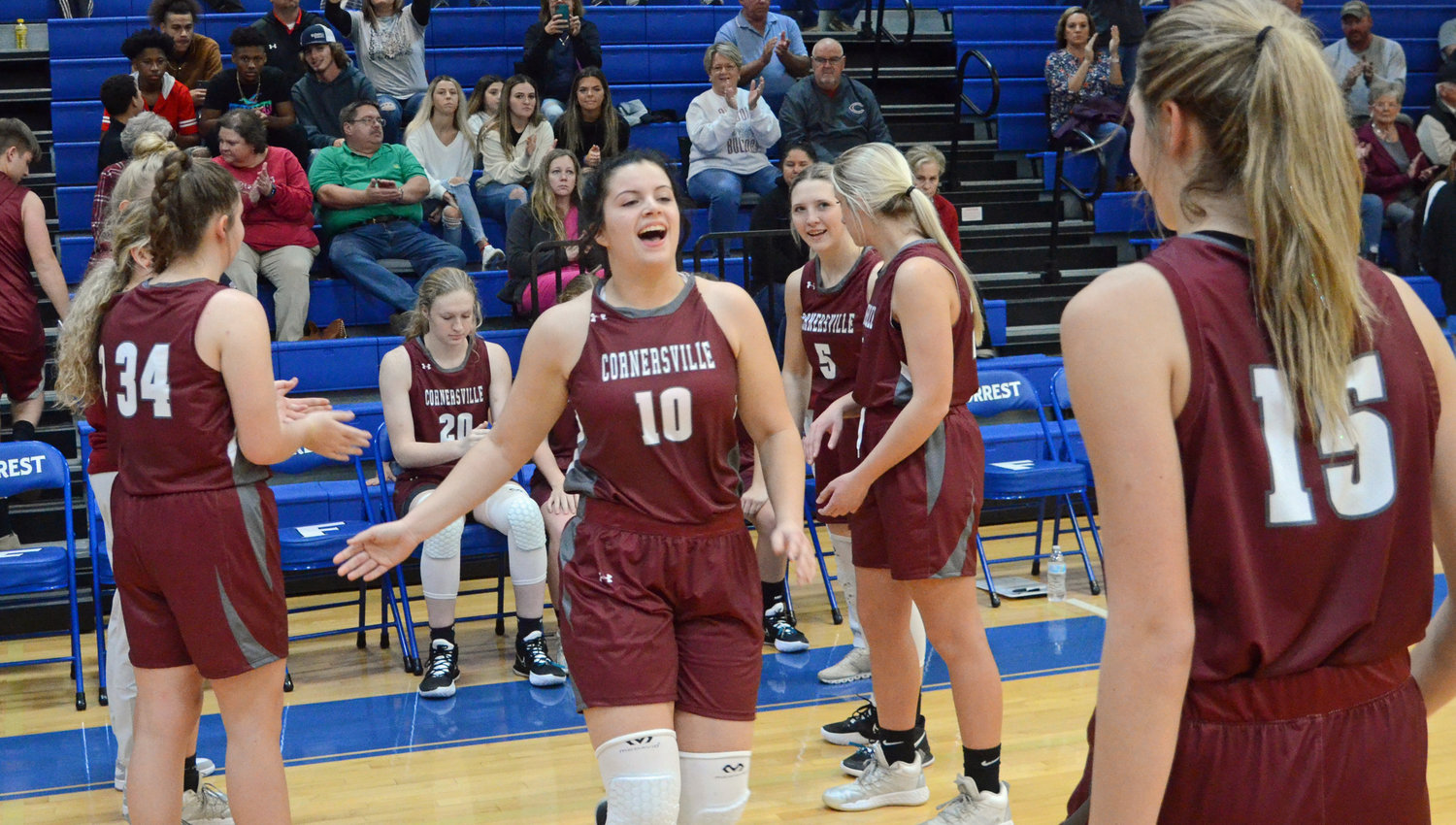 Katie Powers (10) runs out before the start of the intra-county rivalry game.
Previous Next
Posted Wednesday, November 17, 2021 10:26 am

“Hats off to Cornersville, being down 15 to 20 points, they never gave up and kept grinding,” Murrell said. “I see a lot of good things for them even though they have a young team and a new coach.””
Forrest coach Hal Murrell
By Anthony S. Puca Sports Writer

It was opening night for high school basketball on Tuesday at Chapel Hill with longtime head coach Hal Murrell sending out the Lady Rockets in his first game on the bench at Forrest versus the Cornersville Lady Bulldogs and former Frog Bottom standout football and basketball player Hayden McMahon, who returned to his alma mater and was on the bench in his debut with the Lady Bulldogs.

The Lady Rockets came away with a 53-31 wire-to-wire win in the intra-county rivalry Hall of Champions contest and extended their winning streak over Cornersville to 10 in a row, dating back to 2012.

“It was a step in the right direction, there were some mistakes, but I saw a lot of really, really good things,” Murrell said. “I thought our transition was good and I thought our defensive intensity was good and we played as a team.”

Addison Bunty had the best game of her Forrest career, flying all over the court as the Lady Rocket senior was a thieving defender, stealing the ball seven times and scoring on fast break layups on six of the steals while also pumping in a pair of 3-pointers to lead all scorers in the game with 20 points.

“I’m so proud of her, she is one of those kids that works her tail off,” Murrell said. “She’s sneaky quick and anticipates passes well and gets in the passing lane and when we can get out and run like that we are better.”

Anna Wood was the lone Lady Bulldog in double figures with 10 points while Jayli Childress had eight, Hannah Moore, Annabelle Mulliniks, and Addie Gentry all had three points apiece, Gracie Spray netted a deuce, and Katie Powers had one marker.

The Lady Rockets flew off the launch pad, opening the game with a 7-0 run behind a pair of steal and scores by Bunty.

Forrest extended its first quarter lead to 13-5 before a buzzer-beating 3-pointer by Cornersville’s Anna Wood made it a five-point contest.

Wood nailed another trey early in the second period to cut the Forrest lead to four points at 15-11 before Inlow matched the long bomb at the other end and then Bunty did it again, swiping the rock on back-to-back Cornersville possessions and taking it the distance both times to double up the score at 22-11.

Forrest took a 22-14 lead to the locker room at halftime and scored the first six points of the third period, including a picture perfect pass by Kirby to Carli Warner to open the second half.

The Lady Rockets kept moving forward and with just under three minutes to play in the period, Inlow drilled back-to-back treys, opening up a 19-point lead at 38-19.

“I was glad to see Inlow knock some shots down, I know she is a great shooter,” Murrell said. “She had struggled in the preseason and I think when she saw a couple go through the net, it really freed her up because she shot some tonight that didn’t even touch the rim.”

A Kirby bucket to start the fourth quarter made it a 43-24 contest before the Lady Bulldogs made a 7-2 mini-run, cutting the Forrest lead to 14 points on another Wood 3-pointer.

Cornersville had the ball two more times with a chance to cut deeper in to the deficit, but failed to score.

“Hats off to Cornersville, being down 15 to 20 points, they never gave up and kept grinding,” Murrell said. “I see a lot of good things for them even though they have a young team and a new coach.”

Inlow and Bunty put the game away with both players nailing a 3-pointer and Bunty finished the way she started with a swipe and score to seal win number for Murrell and the Lady Rockets.

The two squads meet again on Monday at Cornersville with tip-off slated for 6 p.m.