UNIONVILLE – It was a battle for 80 minutes Tuesday night between two teams whose seasons were on the line in the District 6-A soccer semifinals.

When the dust had settled, the Community … 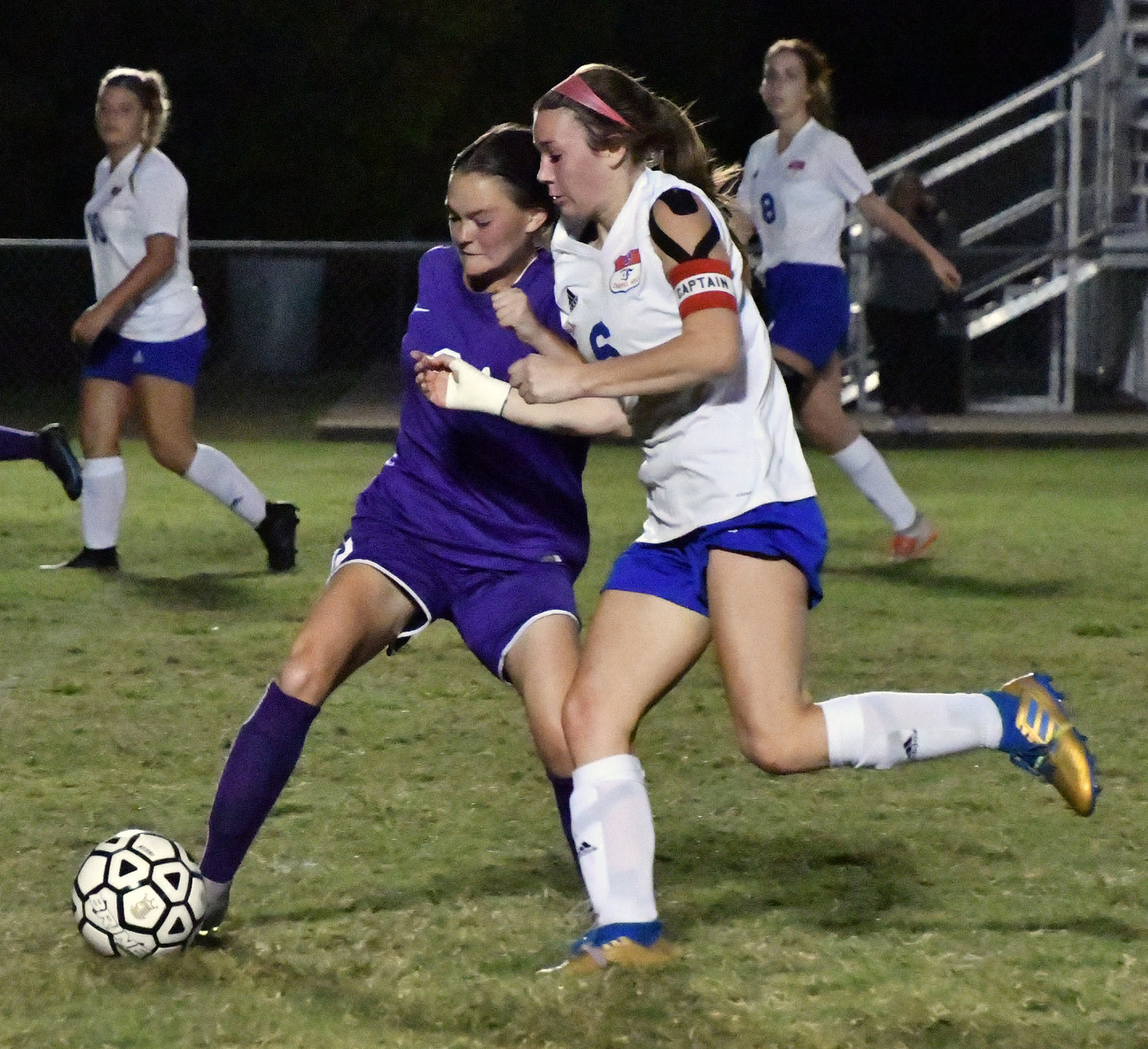 Sarah Woolbright (2) of the Viqueens and Addison Bunty (6) of the Lady Rockets battle for possession.
Tribune Photo by Rickey Clardy 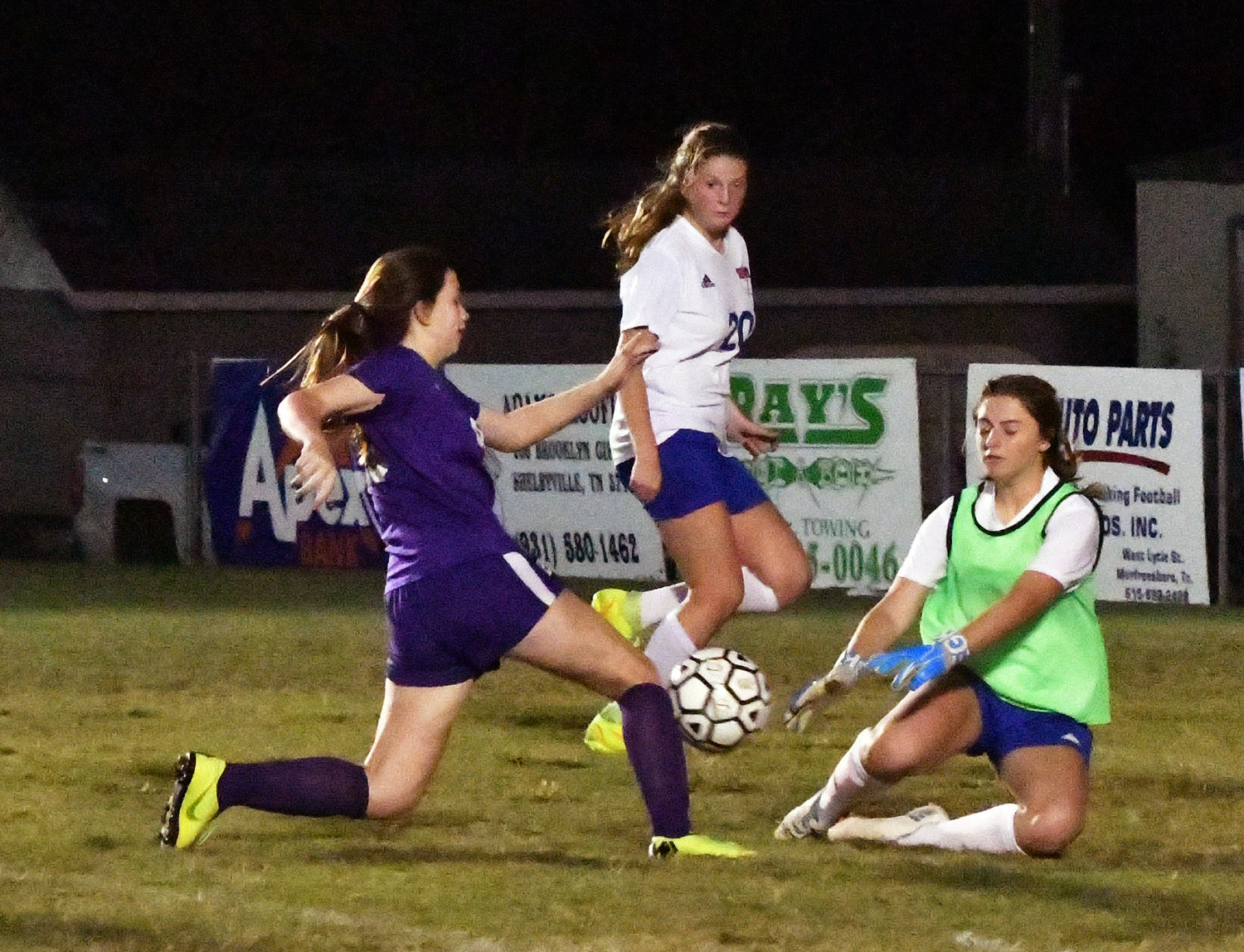 Goalie Madison Medina of the Lady Rockets makes the sliding save of a shot attempt from Audrina Bearden (26) of the Viqueens.
Tribune Photo by Rickey Clardy
Previous Next
Posted Thursday, October 14, 2021 11:21 am
By Rickey Clardy ~ For the Tribune
UNIONVILLE – It was a battle for 80 minutes Tuesday night between two teams whose seasons were on the line in the District 6-A soccer semifinals.
When the dust had settled, the Community Viqueens broke out of a tie game with two second half goals and dodged a game-tying goal as the Viqueens defeated the Forrest Lady Rockets 3-1.
The Viqueen freshmen came up big as all the goals and assists for Community came from its first year players.
The Viqueens won their two regular season games against the Lady Rockets, but it was Forrest who took the lead out of the gate.
Maddie Stalneker drilled a shot off the top of the crossbar and over the goal line to give the Lady Rockets a 1-0 lead six minutes into the contest.
The Lady Rockets were quicker to the ball and used their strong kicking game to control the first 20 minutes of the opening half.
Forrest had numerous chances to increase their lead but came up short on their scoring opportunities and clung to its one-goal lead.
The Viqueens increased their intensity in the half but were held scoreless until Stevie Dickenson booted the ball over the Lady Rocket goalie with three minutes left to tie the game at 1-1 and end the first half scoring.
Two more freshmen teamed up as Audrina Bearden took a cross from Alisha Hartsfield and found the back of the net 15 minutes into the second half as the Viqueens took their first lead at 2-1.
It appeared the Lady Rockets had tied the game on a penalty kick with 18:45 remaining, but the Viqueens received a reprieve.
After Forrest made the initial penalty kick, a Lady Rocket was ruled in the penalty box and the score was nullified.
A second penalty kick was attempted, but Viqueen goalie Carlie Blanton made the save to keep Community in the lead.
The momentum turned in the favor of the Viqueens after the penalty kick.
Community had chances to increase its lead, but was held in check before Hartsfield added an insurance goal with 35 seconds left to seal the Viqueen win.
The win carries the Viqueens to the District 6-A finals at Cascade on Thursday night.
The Lady Champions were 5-1 winners over Cannon County in the other semifinal.
Community is also assured of a berth in the Region 3-A tournament next week.
Forrest          1  0  —  1
Community   1  2  — 3
First Half
F – Maddie Stalneker goal, (33:48).
C – Stevie Dickenson goal, (2:56).
Second Half
C  – Audrina Bearden goal from Alisha Hartsfield, (25:38).
C – Hartsfield goal, (0:35).