After a loss at intra-county rival Marshall County on Tuesday night, the Forrest Lady Rockets returned home to the Field of Dreams in Chapel Hill where the defending back-to-back state champions … 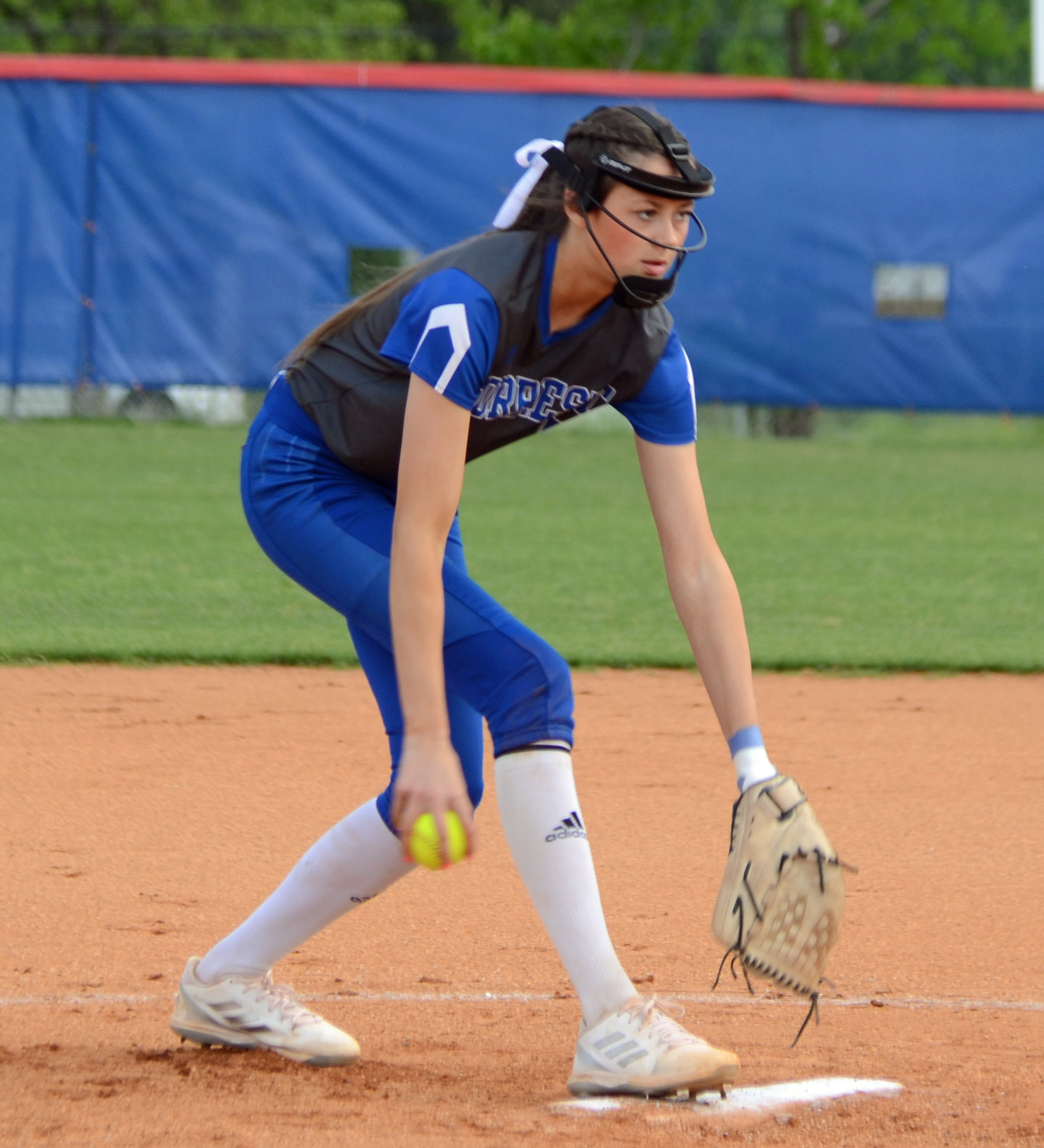 Freshman Ella Chilton turned in a strong performance in the circle in Wednesday night’s 11-1 win over Rockvale in the regular season finale at the Field of Dreams in Chapel Hill.
Tribune photos by Anthony S. Puca 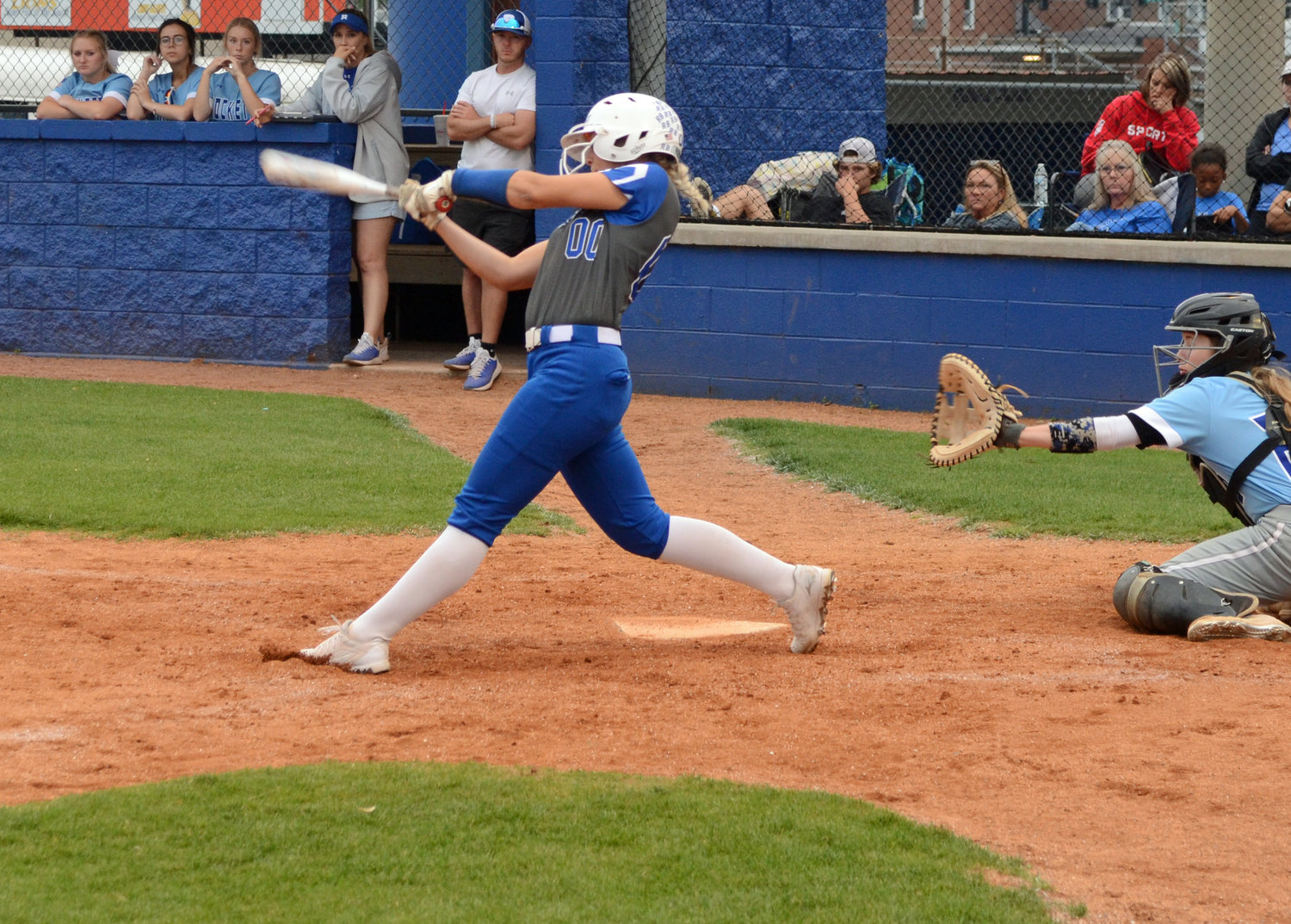 Abby Ferguson rips a bases loaded double to break the game wide open in the bottom of the fourth inning. 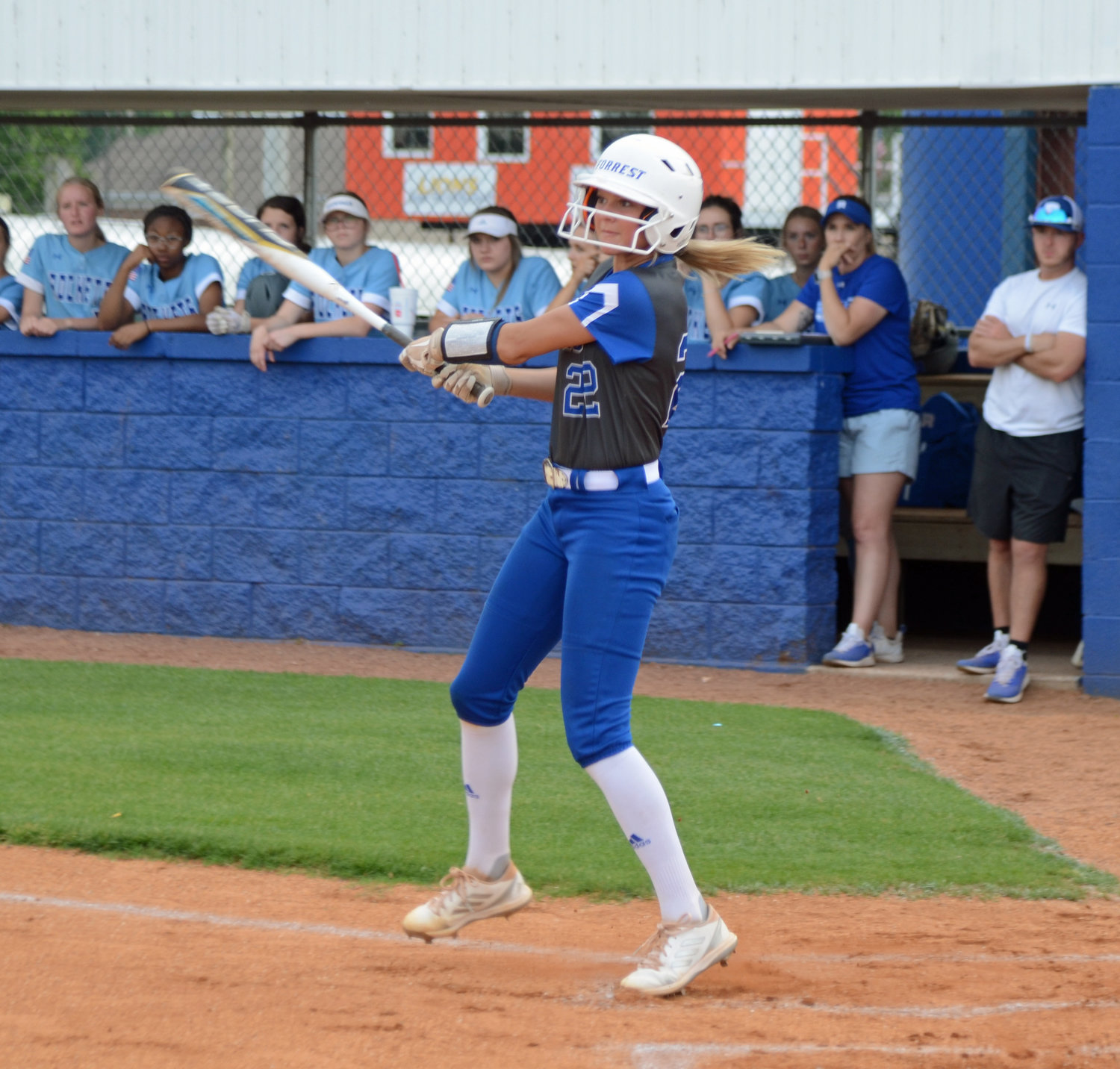 Macyn Kirby is 14-for-22 with 12 runs scored in the last six games for the Lady Rockets, who take on Grundy County Monday at Forrest in the first round of the District 7-AA Tournament. 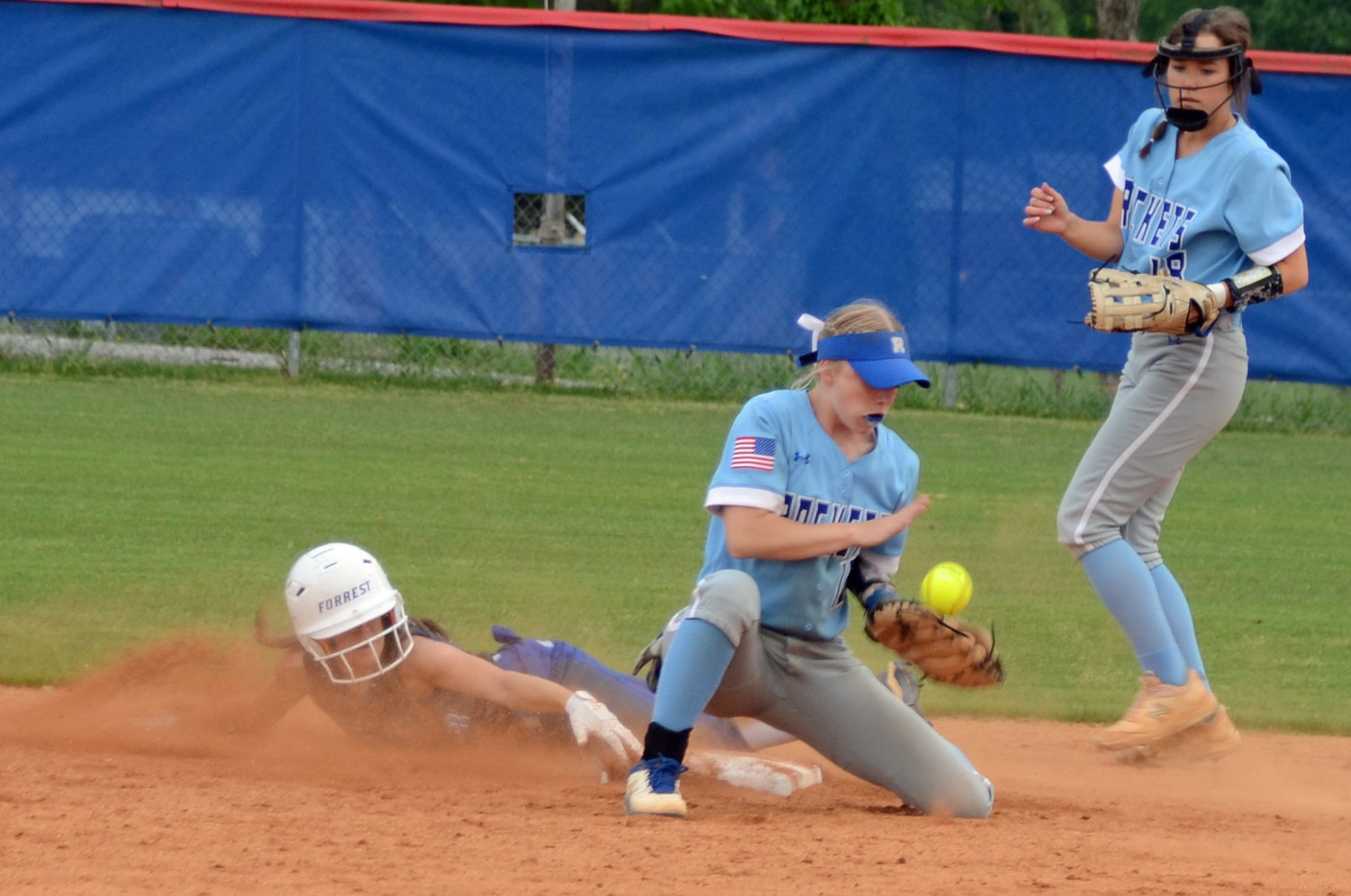 Addi Bunty steals second base in a cloud of dust in the second inning. 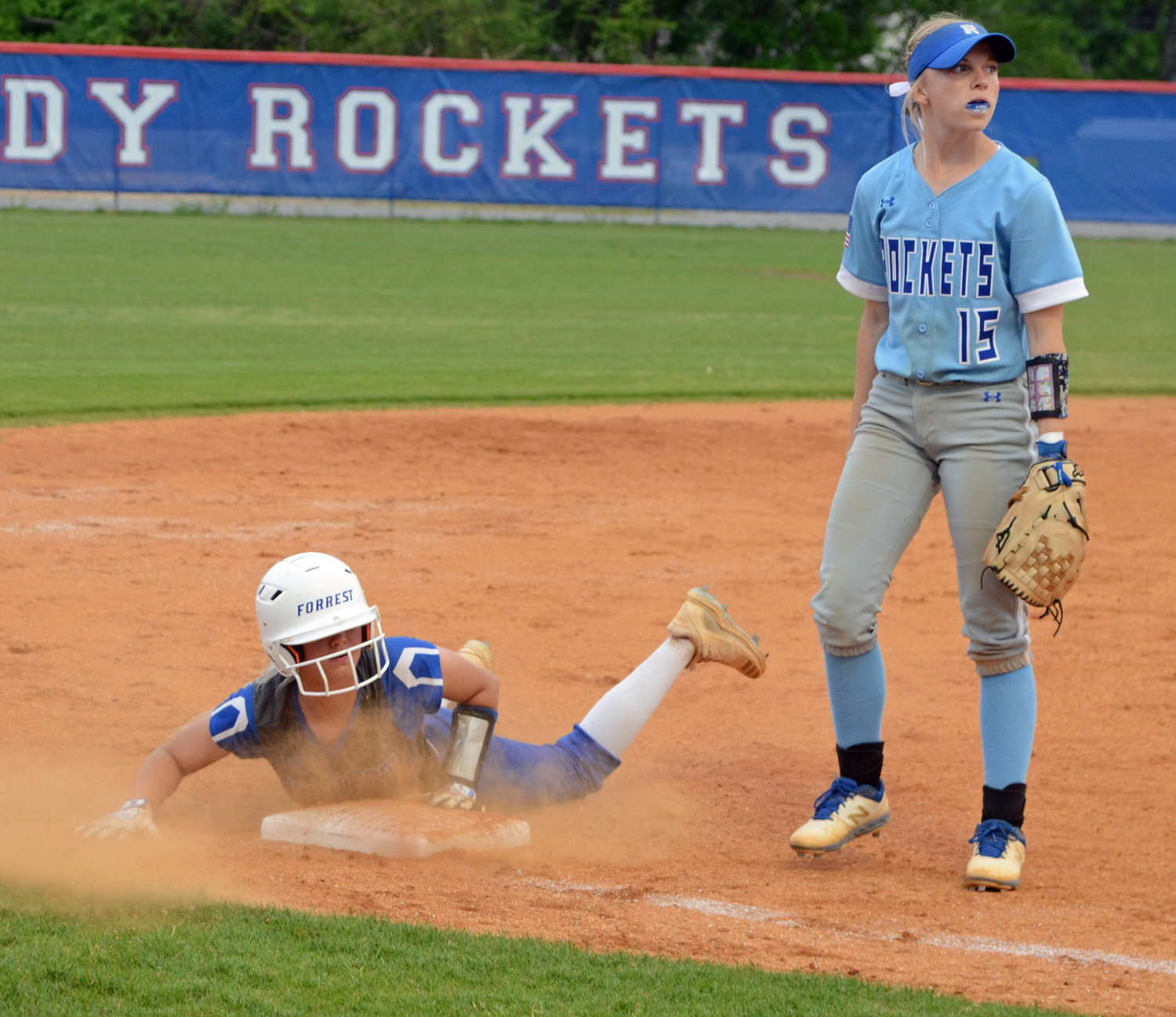 Briley Burnham, who had two RBIs and two runs scored, steals third base in the bottom of the fourth inning. 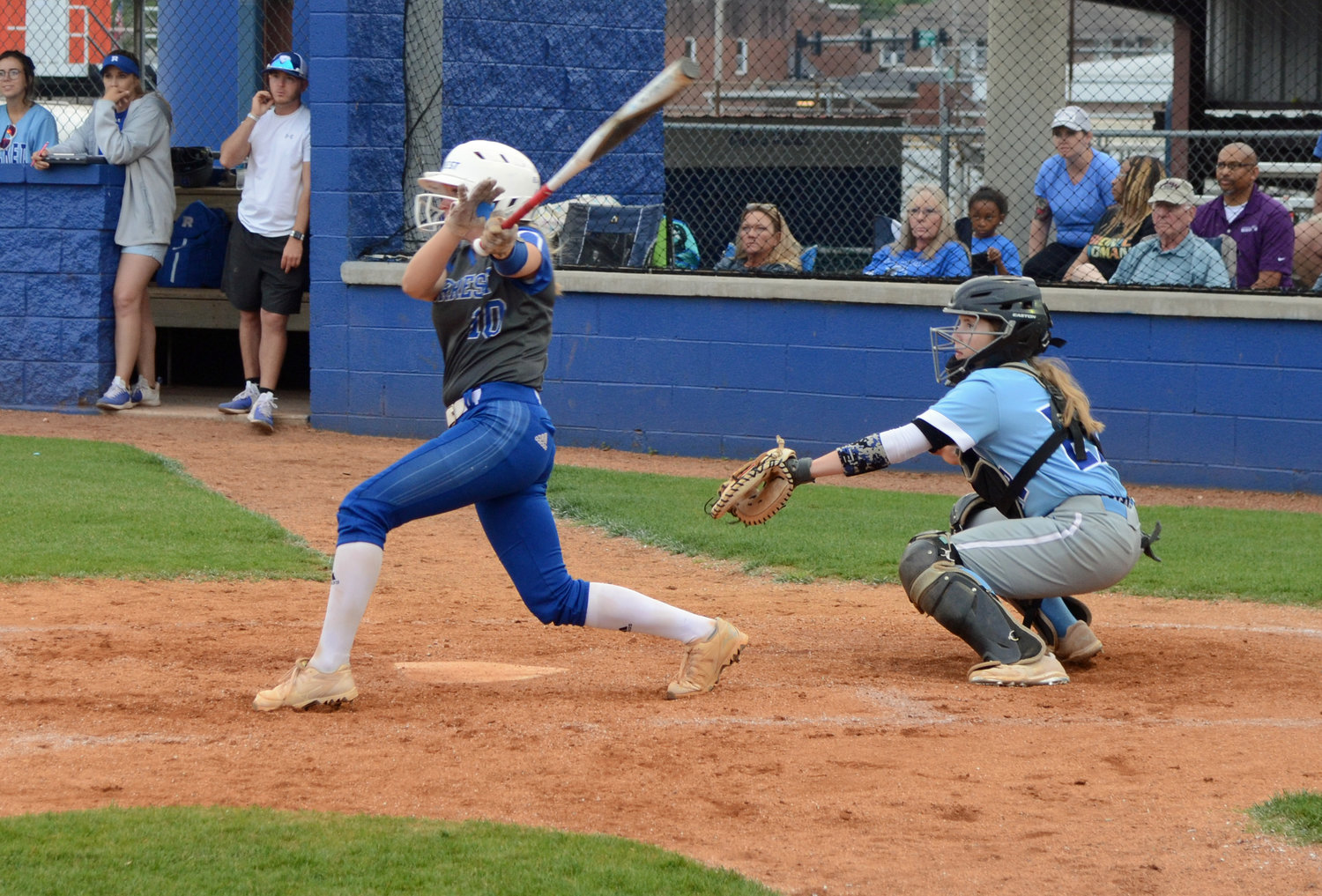 Parker Wales nails a two-strike pitch for an RBI single in the bottom of the fourth inning. 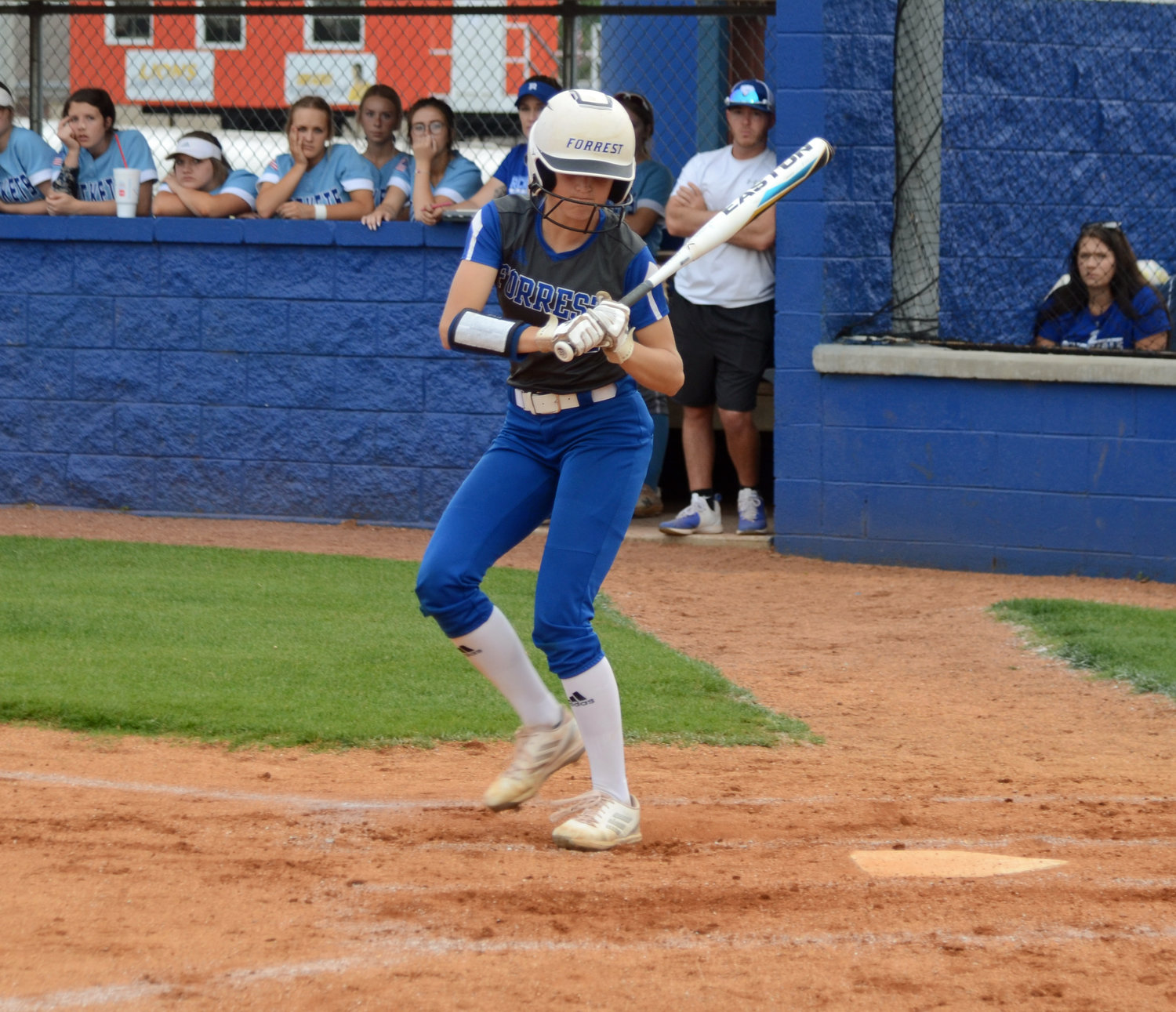 “I feel like we need to just keep doing what we are doing,” Lightfoot said. “We know our swings are there, our defense is there, our pitching is there, it’s just making sure we show up and are mentally here and we make adjustments as we go.”
Forrest coach Shelby Lightfoot
By Anthony S. Puca Sports Writer

After a loss at intra-county rival Marshall County on Tuesday night, the Forrest Lady Rockets returned home to the Field of Dreams in Chapel Hill where the defending back-to-back state champions run-ruled Rockvale 11-1.

Ella Chilton picked up the complete game win in the circle with a solid performance as the freshman gave up one unearned on three hits while striking out two and walking one Rockvale batter in the regular season finale.

Forrest banged out 15 hits in the contest with Macyn Kirby leading the way with a 3-for-4 performance at the plate.

“Our bats came alive tonight, it’s a little bit frustrating just because we know what we can do,” Lightfoot said. “Being consistent with it is where we have been at all year, so maybe ending the regular season on this note we can move in to district on a positive note.”

Abby Ferguson had a bad first two at bats with a pair of strikeouts looking, but the sophomore center fielder displayed excellent resiliency when she stroked a bases loaded double that cleared the bases in the huge eight-run bottom of the fourth inning.

“We kind of know some our top of the lineup struggles with a little bit of a slower speed and honestly for a little bit we haven’t seen anybody that throws pretty good,” Lightfoot said. “So this girl threw a little bit harder and Fergie is just still so early, her timing is so early, so we have to make adjustments and cut our swing down and just put it in play.”

In her fourth at bat, Ferguson put the cap on the contest with a walk-off single that drove in Maggie Daughrity, who went 2-for-2 with one RBI, two runs scored, and a base on balls.

Christa Warren and Addison Bunty (RBI, RS, 2SB) also had two hits apiece in the game with Warren driving in one and scoring one run.

Chilton gave up two of the three hits she allowed in the contest in the first inning, but a groundball out to Burnham at second base squashed the early Rockvale threat.

Forrest left one runner on base in the bottom of the inning before Chilton set down the visitors 1-2-3 in the top of the second.

Bunty got on base via a bunt single and stole second base with one out in the bottom of the second inning and Burnham drove her home with rope double to left field.

A ground ball out sent Burnham to third and she scored on a perfectly executed squeeze bunt by Daughrity to make it 2-0.

Chilton retired Rockvale in order again in the third inning and Forrest left two more runners stranded in the home half of the frame.

Taylor Rudolph reached on a one-out error in the top of the fourth before Macey Harris doubled to deep center field to make it a 2-1 contest.

Chilton made a nice defensive play when she grabbed a ground ball back to the circle and threw to Warren, who tagged out Harris at third base.

Chilton walked the next batter and was down 3-0 in the count to Lily Pendergrast before striking her out looking to end the inning.

That was the last chance Rockvale had to make a move as Forrest exploded in the bottom of the inning, sending 12 batters to the plate and scoring eight runs.

Burnham reached on a one-out error and Wales followed with a single.

Lightfoot sent both runners for a double steal before Daughrity walked to load the bases for Kirby, who slashed a single to left field, making it 3-1.

Wales trotted home on a Warren base hit before Ferguson cleared the sacks with a double to center field, making it a 7-1 contest.

Warner and King followed with back-to-back RBIs and Burnham made it 10-1 with a sacrifice fly RBI.

Chilton cruised through the top of the fifth inning unscathed and Daughrity led off the home half of the stanza with a base hit to center field.

Kirby followed with a single and one out later, Ferguson stepped in the batter’s box and delivered the walk-off single, scoring Daughrity with the winning run.

Forrest officially begins its title defense on Monday, when they host Grundy County in the first round of the District 7-AA Tournament.

“I feel like we need to just keep doing what we are doing,” Lightfoot said. “We know our swings are there, our defense is there, our pitching is there, it’s just making sure we show up and are mentally here and we make adjustments as we go. So we are just going to keep fine tuning some things and get some confidence in the next couple of days.”

All games will be hosted by the higher seed and the title game is scheduled for Thursday at 6 p.m.