NASHVILLE — The last game of the year is always a difficult game for basketball teams, except the one team that is able to hoist the gold trophy and claim the state championship.While Forrest … 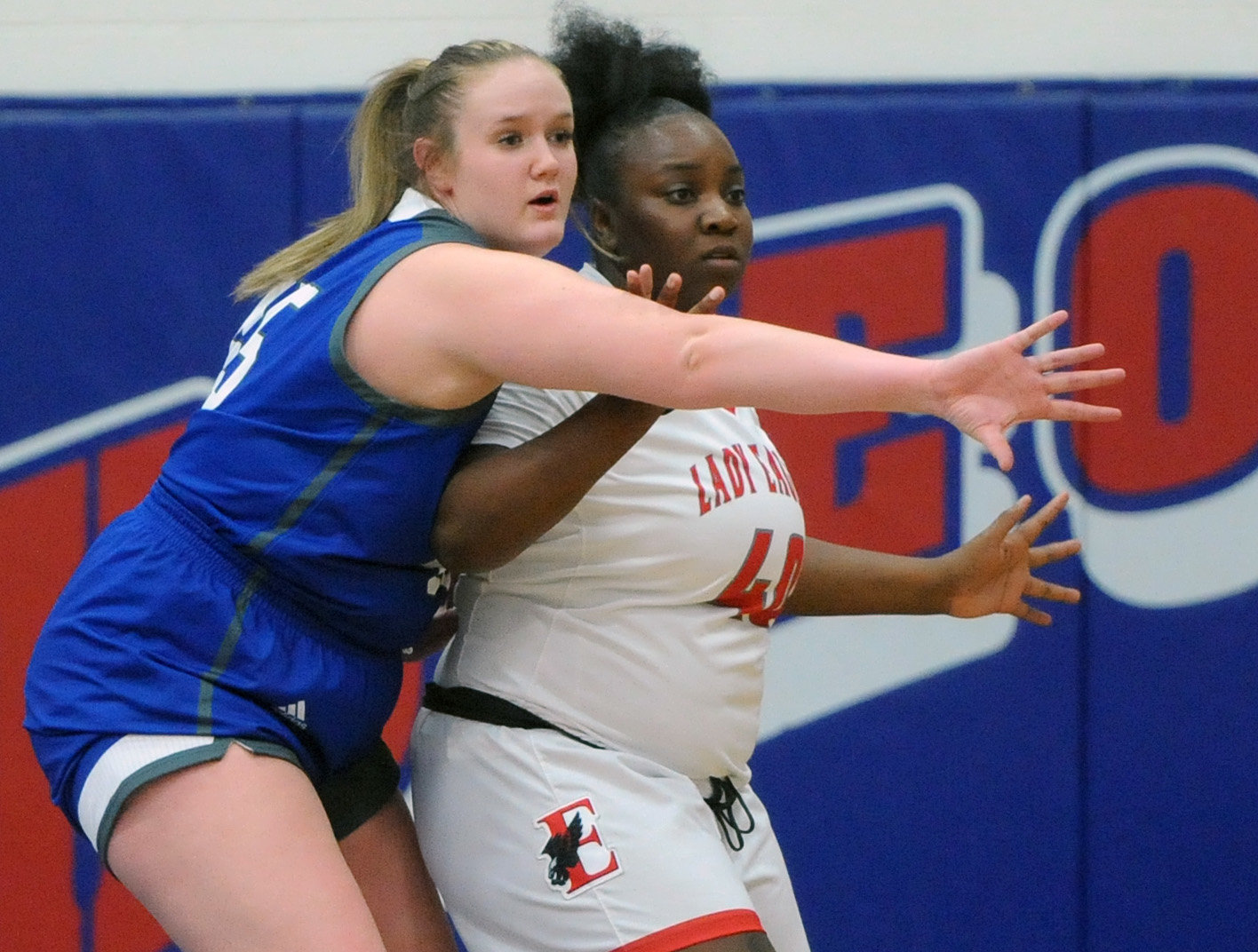 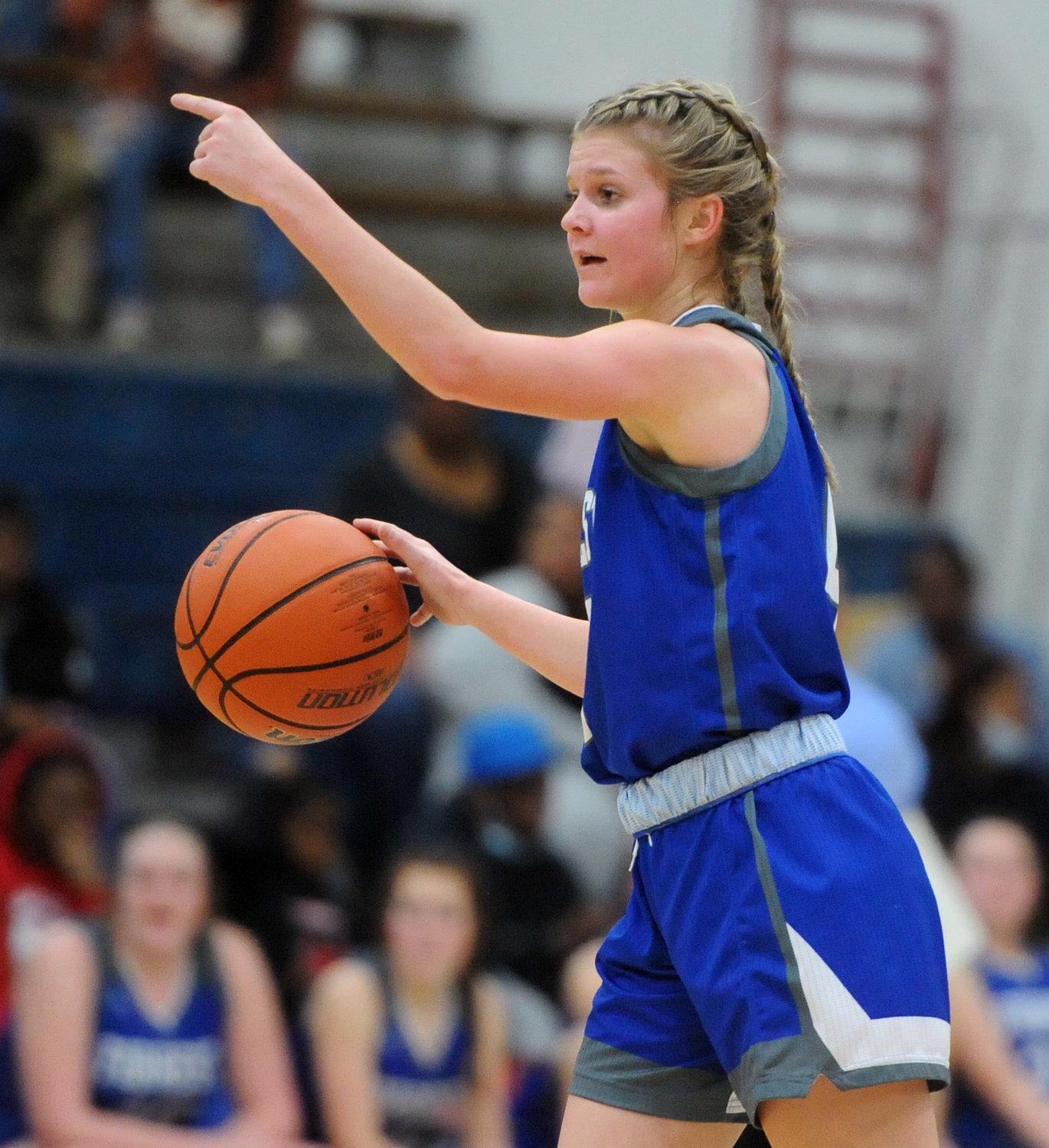 Macyn Kirby directs the Lady Rockets in the half court on Monday night.
Tribune Photo by Chris Siers 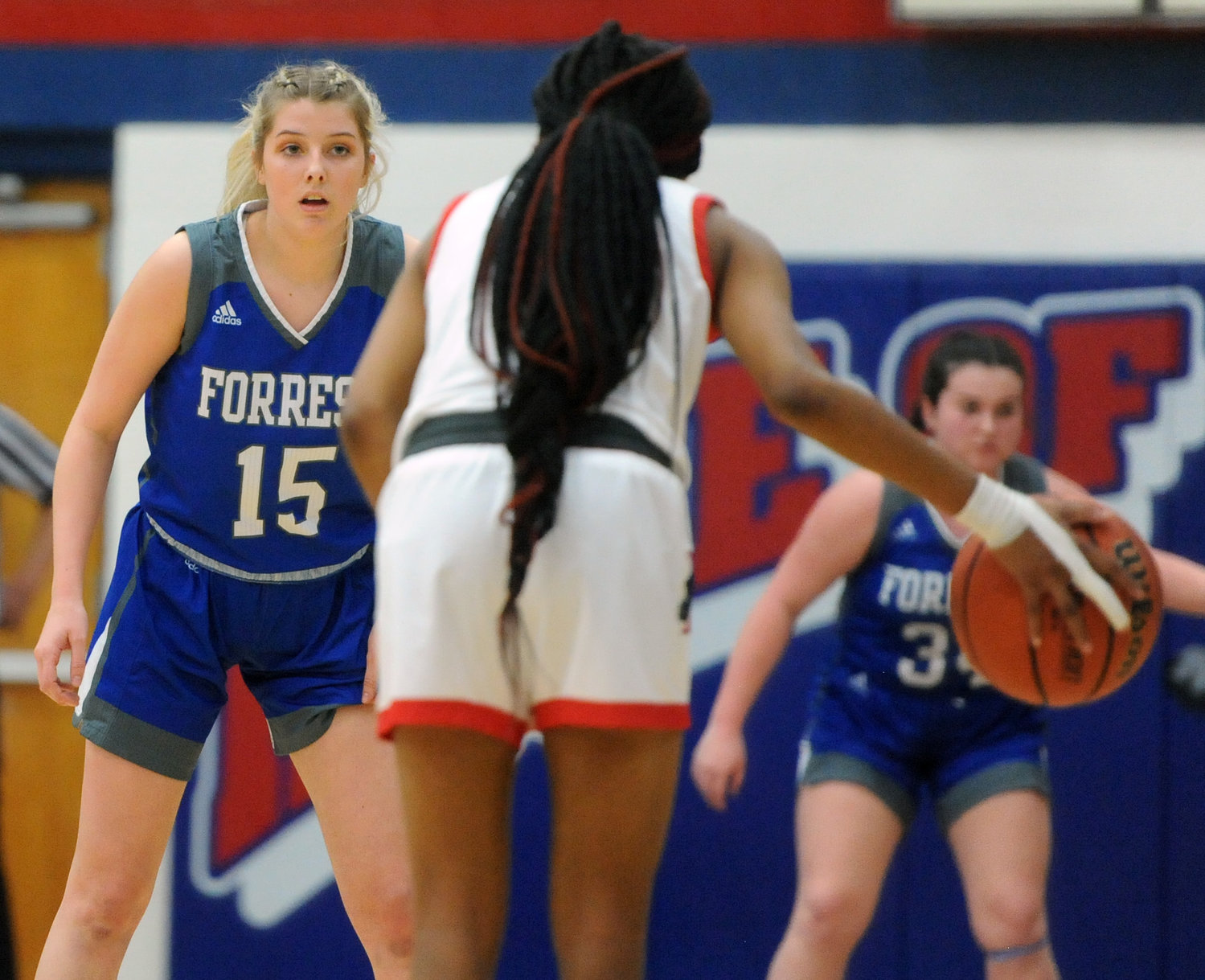 Megan Mealer (15) sets up for a defensive possession against East Nashville on Monday.
Tribune Photo by Chris Siers 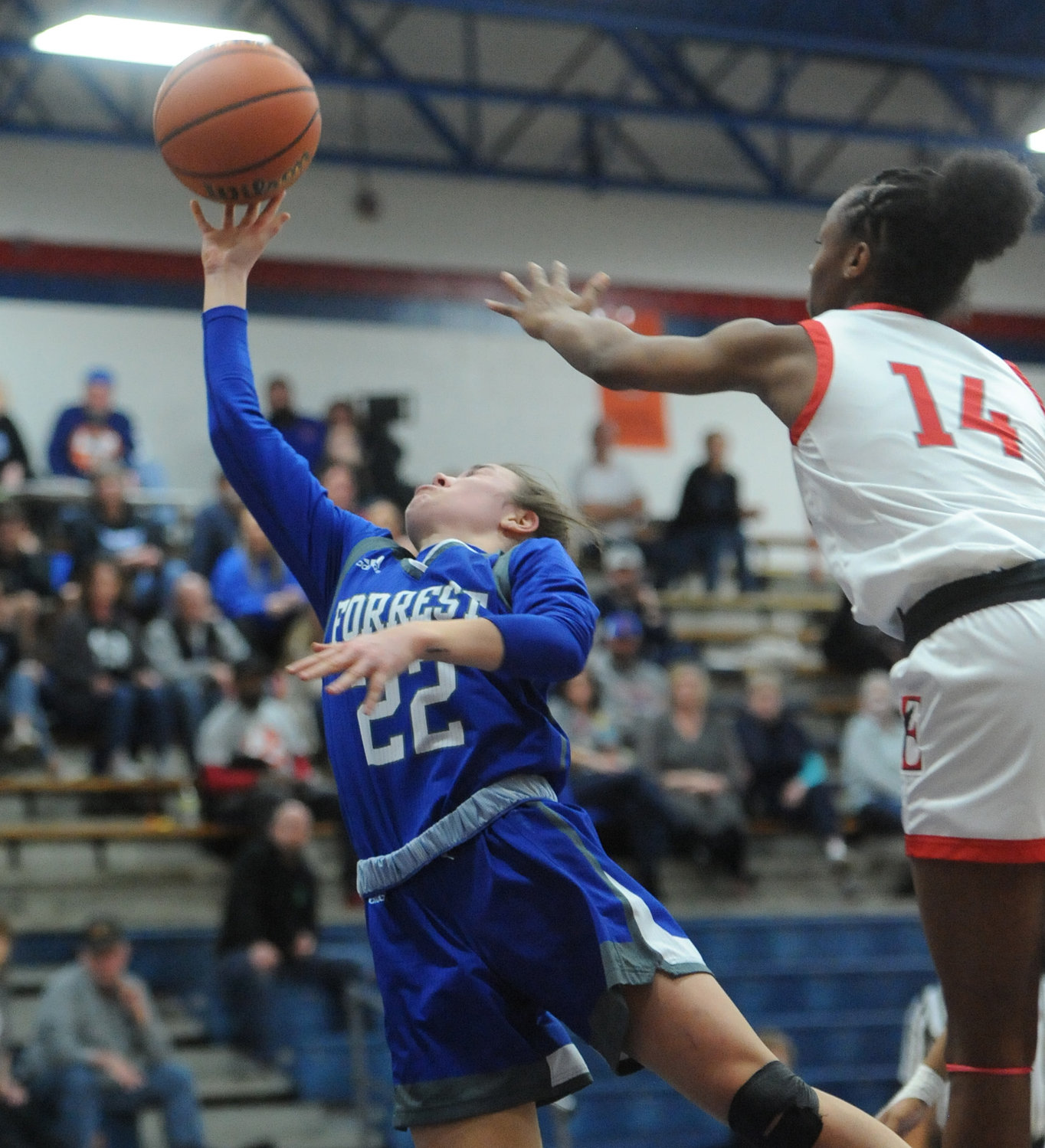 Lady Rocket senior Addison Bunty tries to finish a possession and goes up for two.
Tribune Photo by Chris Siers 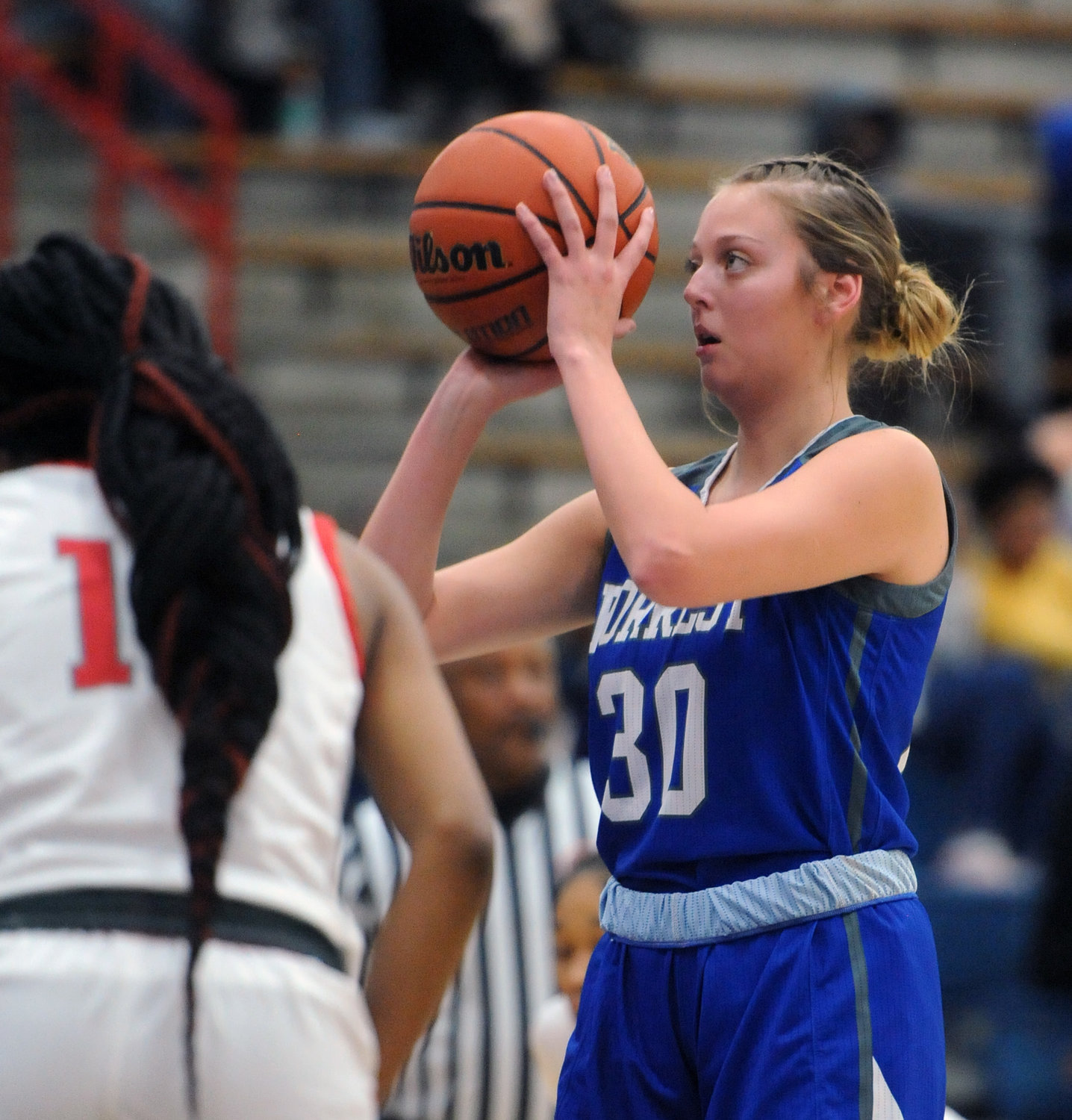 Forrest senior Ryann Lewis settles in for a free throw attempt in the first half against East Nashville on Monday.
Tribune Photo by Chris Siers
Previous Next
Posted Tuesday, March 1, 2022 12:35 am
By Chris Siers ~ sports@t-g.com

NASHVILLE — The last game of the year is always a difficult game for basketball teams, except the one team that is able to hoist the gold trophy and claim the state championship.
While Forrest has made significant strides in the first season under head coach Hal Murrell, the Lady Rockets (13-15) ran into a buzzsaw against East Nashville (23-1) in a 62-28 season-ending loss on Monday in the Region 4-AA semifinals.
“There’s only one AA girls team that’s going to win their last game and unfortunately it’s not going to be us. This one loss doesn’t define who we are and how far we’ve come since this summer. It’s night and day the difference in the two teams. We did pick a bad night not to play well, but you have to give them (East Nashville) a lot of the credit. They forced us into some bad decisions, some very poor passes. They feed off turnovers,” Murrell said.
The East Nashville game plan was rather simple—speed the game up, utilize traps and create possessions off turnovers.
The up-tempo style of the game immediately impacted the Lady Rockets and Forrest simply struggled to adjust to the speed East was pushing.
The Lady Eagles jumped out to a 10-2 lead in the first quarter and it took until sophomore Cadence Chapman hit a shot of the block off an assist by senior Addison Bunty that Forrest connected on a field goal.
After seeing East score seemingly at will for the majority of the first quarter, Forrest closed the opening frame on a 6-0 run to cut the Lady Eagles lead to four points.
That four-point deficit was the closest Forrest came to taking the lead in Monday’s semifinal matchup.
East answered the late first-quarter surge with a 19-4 run in the second quarter to take a 31-12 lead at the half.
East was able to force the Lady Rockets into high-pressure situations that allowed the Lady Eagles to push the ball in transition after turnovers.
“We were just unable to handle the ball in crucial situations. I don’t think their half court offense generated that many points for them—it came off turnovers and second chance opportunities,” Murrell said.
East went on to outscore Forrest 31-16 in the second half to preserve the 24-point win.
Seven different Lady Eagles scored, with Emani Wottord and Jaslyn Walter scoring 13 apiece to lead East.
Chapman and senior Ryann Lewis led Forrest with eight and seven points, respectively.
While the Lady Rockets ran into one of the top teams in the state in an elimination round of the postseason, Murrell couldn’t be more proud of his team and the growth shown in the last eight months.
After winning back-to-back games to open the season, Forrest went on a skid where the Lady Rockets dropped eight of nine games leading up to the Christmas break.
But after months of playing together and buying into the coaching staff’s philosophy, it began to click for the Lady Rockets and they were able to ride a wave of momentum that saw Forrest win nine of its last 15 games.
Murrell was quick to credit the leadership of seniors Ryann Lewis and Addison Bunty for their efforts in guiding the Lady Rockets during the 2021-2022 season.
“I’m the third coach they’ve had in three years. That’s hard on them. But they really bought in. They could have packed it in at Christmas when we still weren’t where we wanted to be. They came to work every day, had a great attitude and a great work ethic. They did great things for us to get our program headed where we want to go,” Murrell said.
While the Lady Rocket senior class features just the two players, their impact can’t be understated and their impressions left on the underclassmen are evidenced by the successful run Forrest enjoyed through January and into the postseason.
“The tools are there. The pieces are there. We just have to get back to work after a little time off and try to take it a step further,” Murrell said.