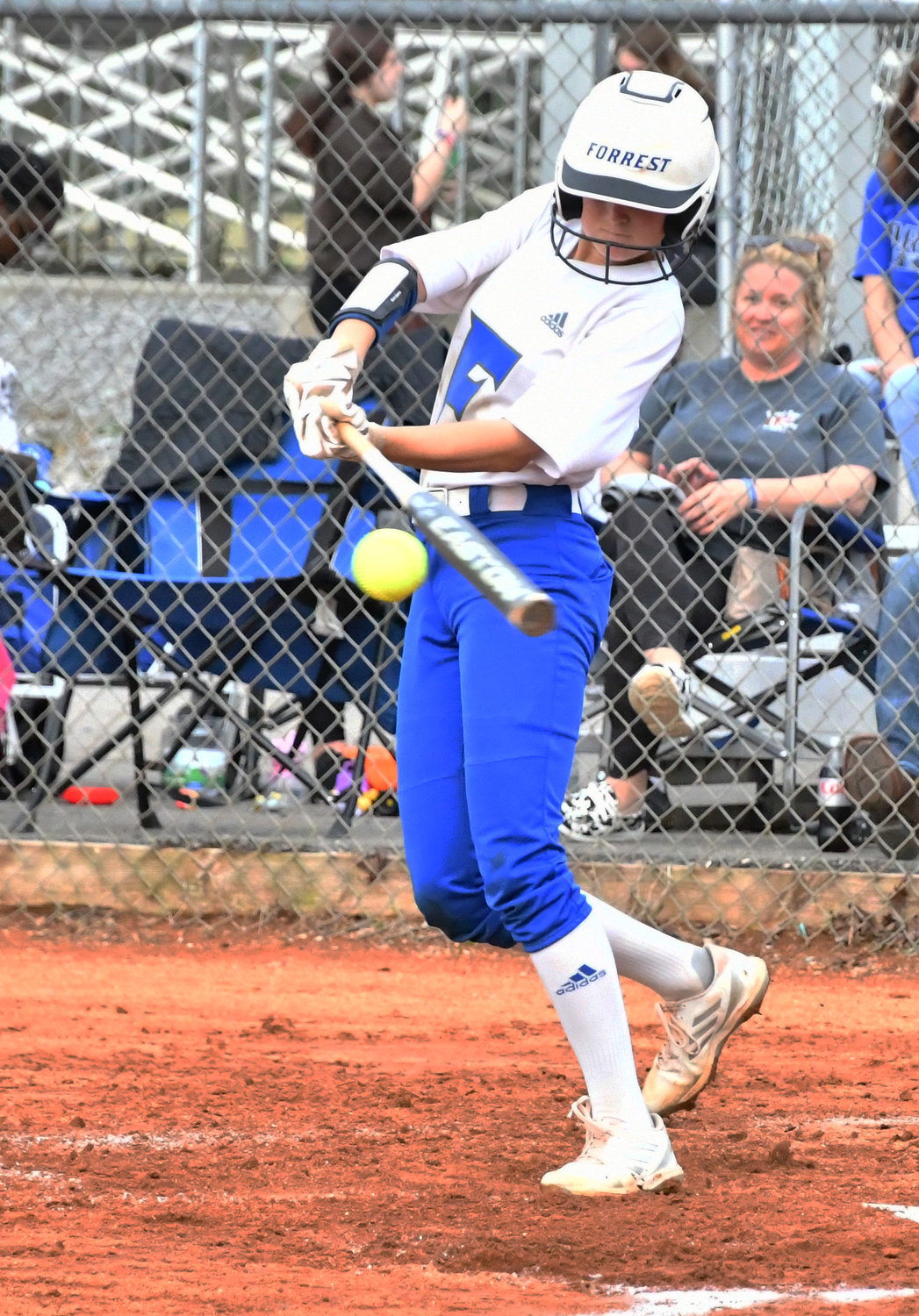 Maggie Daughrity makes contact with the ball for the Lady Rockets.
Tribune Photo by Rickey Clardy 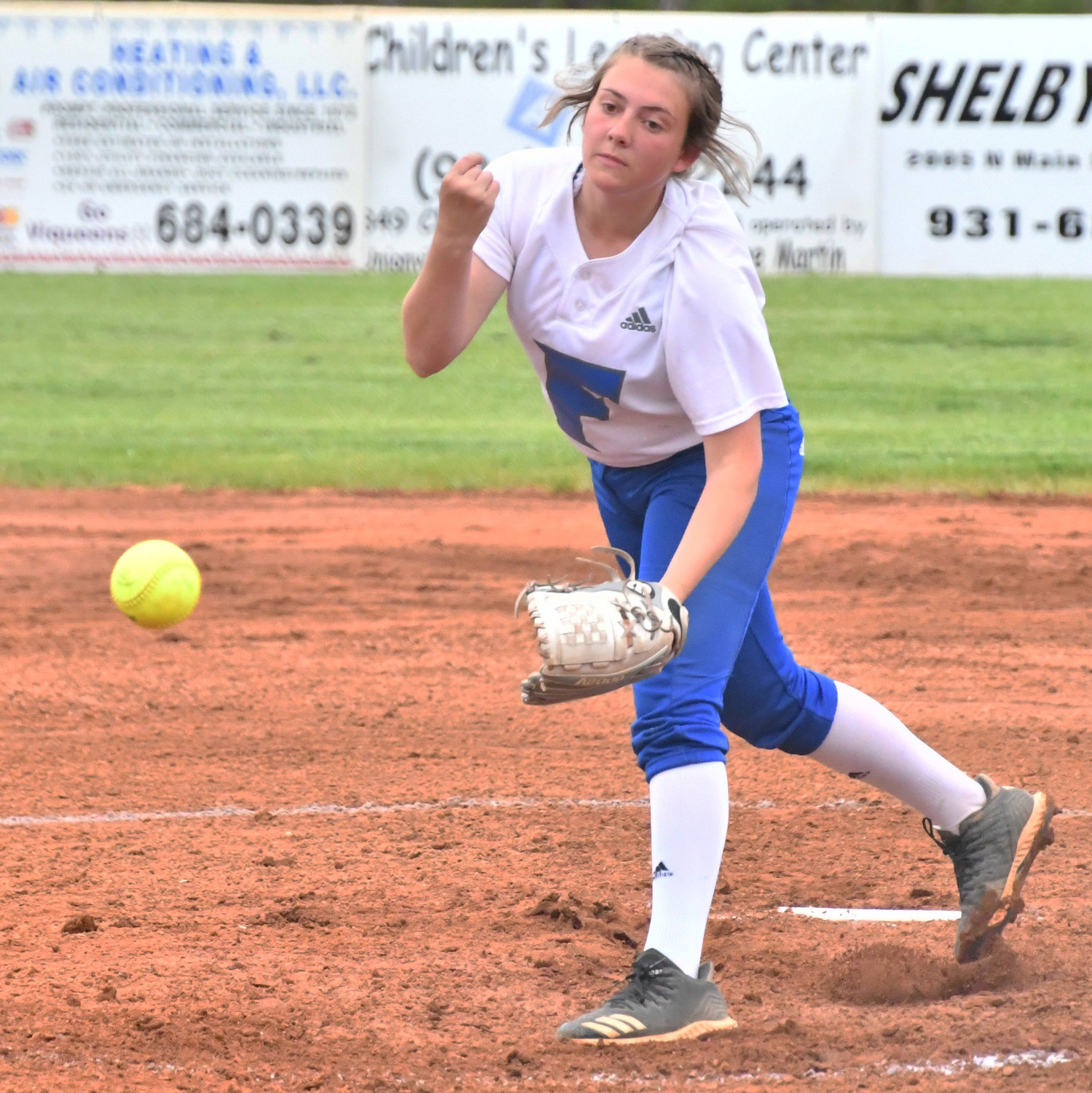 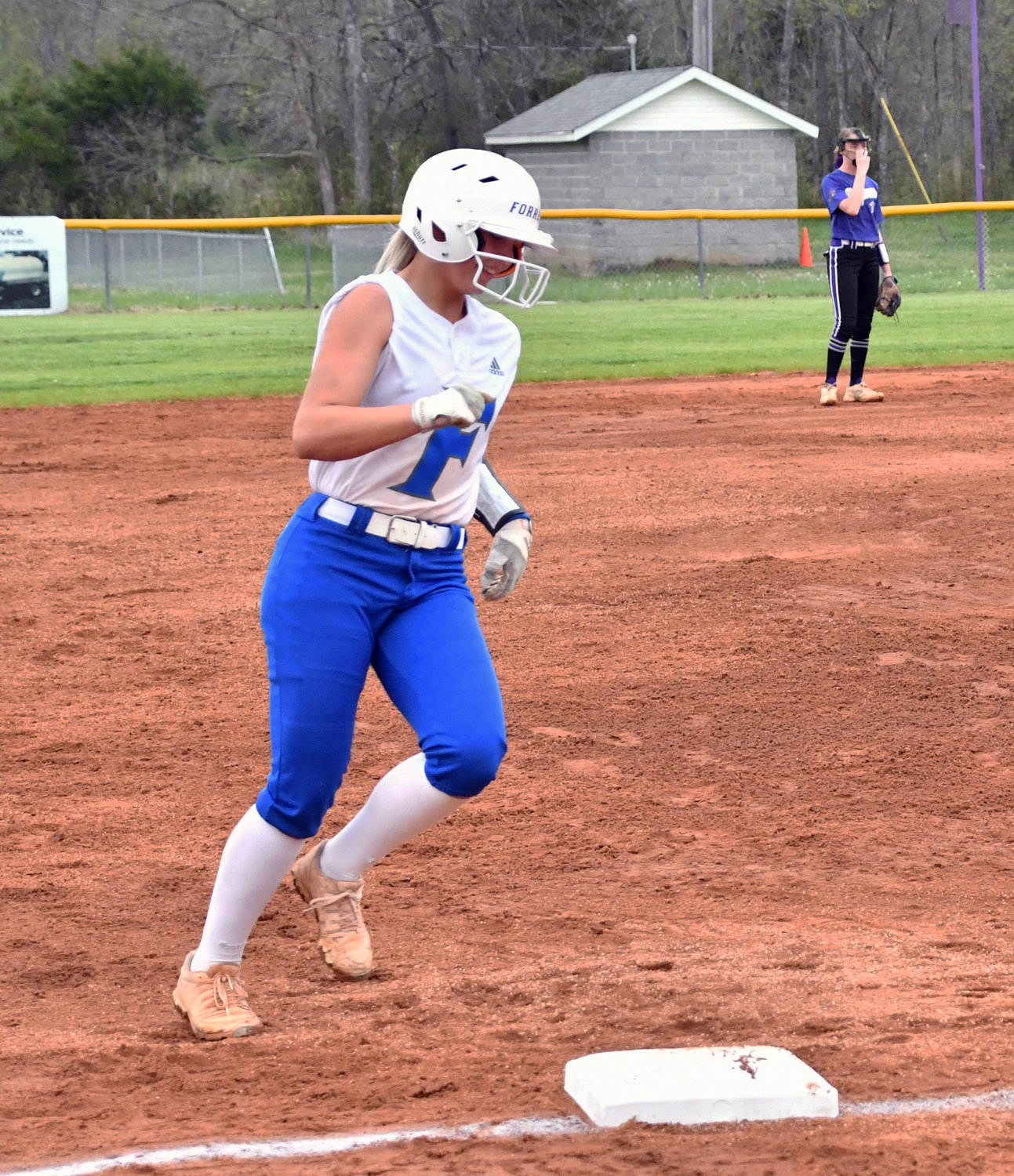 Abby Ferguson of the Lady Rockets is all smiles after hitting a solo homer in the opening inning.
Tribune Photo by Rickey Clardy
Previous Next
Posted Thursday, April 14, 2022 9:53 am
By Rickey Clardy ~ Sports Writer

UNIONVILLE — The Forrest Lady Rockets used a four-run fifth inning to break out of a tie game and went on to defeat the Community Viqueens 10-4 in a District 7-AA softball game Tuesday night.
The Lady Rockets started out with a bang in the opening inning as Christa Warren and Abby Ferguson hit back-to-back homers to give Forrest a 2-0 lead.
The Viqueens were not deterred and came back to tie the game at 2-2 in the bottom of the inning as Taylar Wessner delivered a two-out, two-run double.
Community took a 3-2 in the second inning as Chloe West raced home with the go-ahead run after a Lady Rocket throw to second failed to nab a Viqueen base runner.
Forrest tied the game at 3-3 in the fourth inning as a Viqueen error on a bunt brought home Jenna Goodman.
The Lady Rockets broke out of the tie with four runs and some clutch two-out hitting in the fifth.
After a Leslie Bartoli sacrifice fly gave Forrest a 4-3 advantage, Briley Burnham followed with the first two-out hit to drive in two runs and give the Lady Rockets a 6-3 lead.
A Parker Wales single gave Forrest its final run of the inning and a 7-3 lead.
Wessner drove in the final run of the night for the Viqueens with a solo homer in the fifth to cut the Lady Rocket lead to 7-4.
Forrest added three insurance runs in the final two innings.
A Community error led to a run in the sixth inning while Sarah King drove in two runs with a two-out single in the seventh as the Lady Rockets took the district win.
Ferguson, Warren, Burnham, and Goodman each had two hits to lead the 13-hit Lady Rocket attack.
Wessner and Abbi Murrill had two hits each to lead the Viqueens at the plate.
Julie Williams started on the mound for the Lady Rockets with Ella Chilton in relief in the fifth inning.
Haley Mitchell started for the Viqueens with Hailey Farrar relieving in the seventh inning.
Both teams return to action on Thursday for intra-county matchups.
Forrest travels to Cornersville for a non-district game while Community travels to Cascade in a district game.