CHAPEL HILL — After visiting Grundy County whittled away a 13-point Forrest lead in the fourth quarter, the Lady Rockets (7-11, 2-1) had to find a way to close out a District 7-AA victory over … 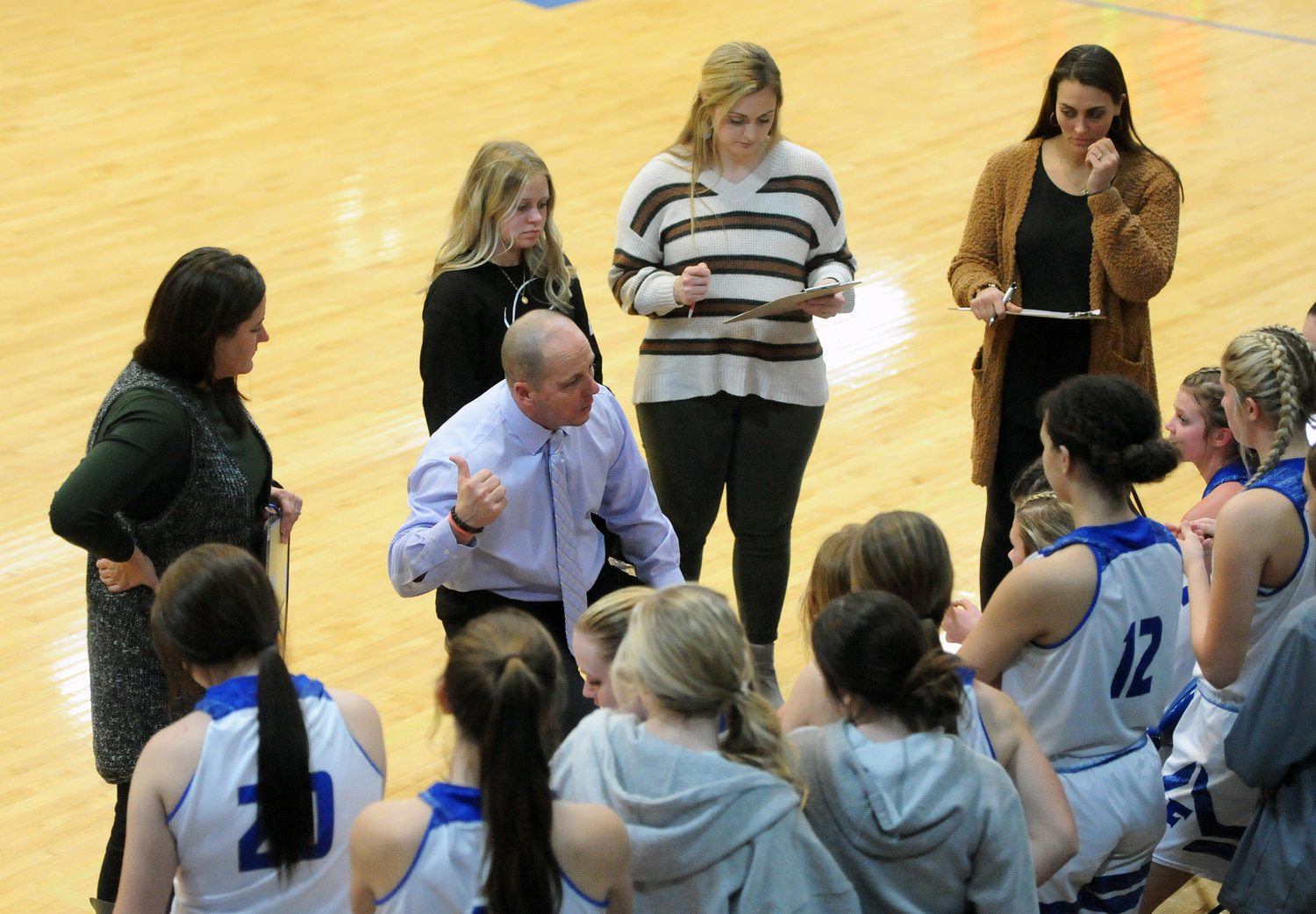 Lady Rocket coach Hal Murrell huddles up with his team during a timeout against Grundy County.
Tribune Photo by Chris Siers 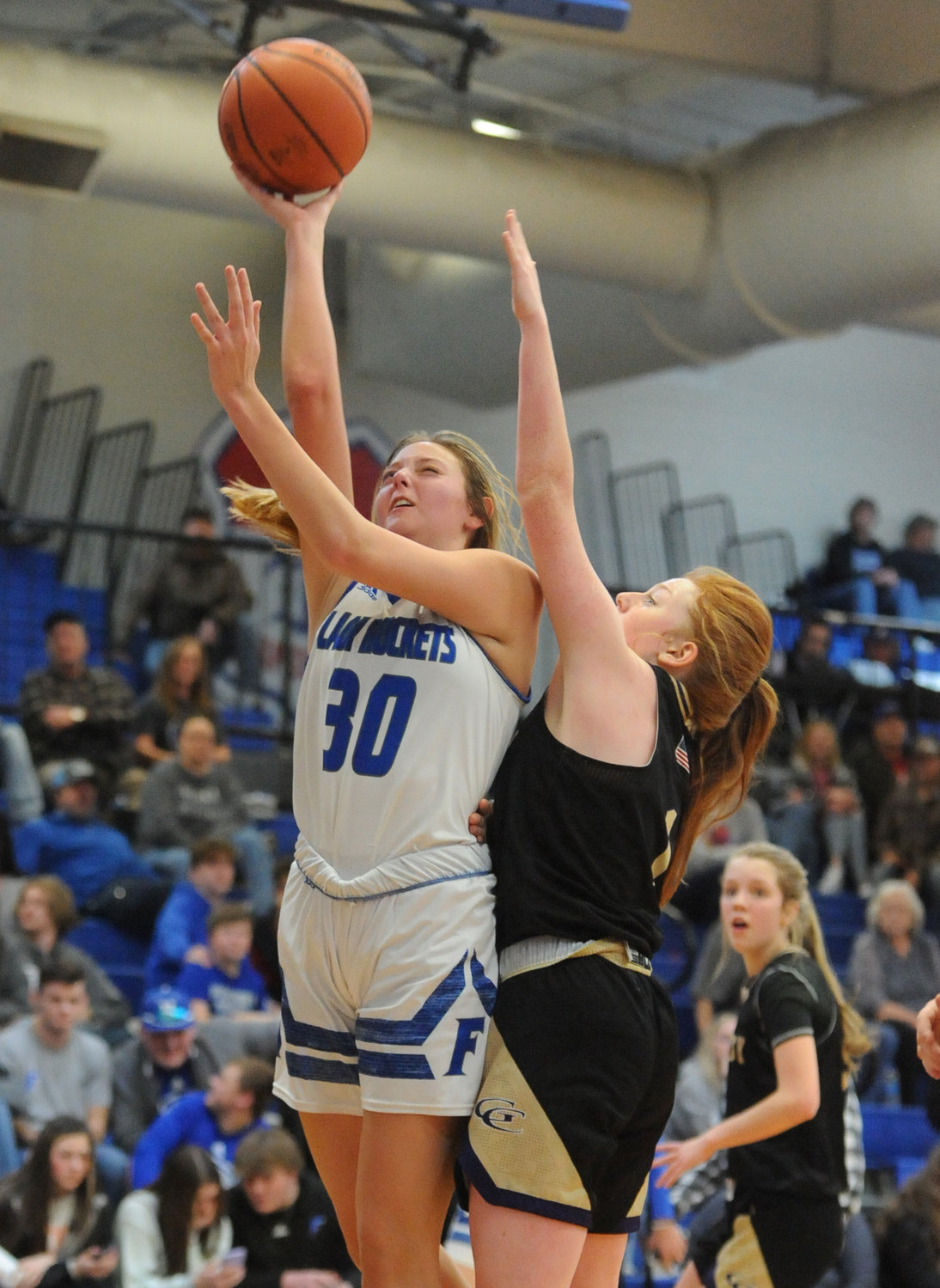 Ryann Lewis goes up strong after hauling in a rebound. She led the Lady Rockets with 17 points.
Tribune Photo by Chris Siers 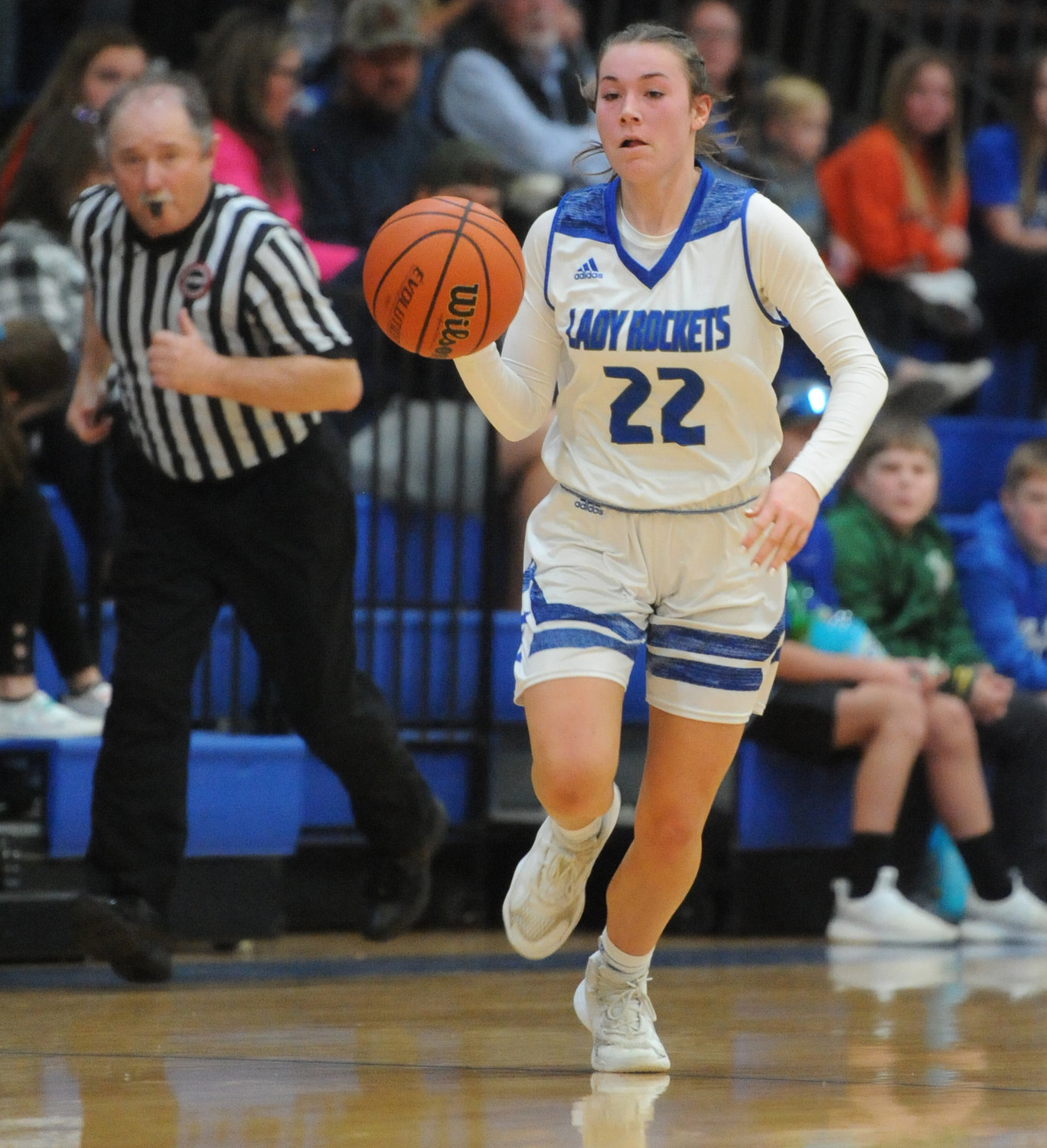 It was just a big team win. It was the first time we’ve been in a situation where we had to execute to close out the game”
Lady Rocket coach Hal Murrell
By Chris Siers ~ sports@t-g.com

CHAPEL HILL — After visiting Grundy County whittled away a 13-point Forrest lead in the fourth quarter, the Lady Rockets (7-11, 2-1) had to find a way to close out a District 7-AA victory over the Lady Yellow Jackets.
That’s just what they did in Monday’s 56-54 win.
Even with a few miscues down the stretch and Grundy County (6-11) who shot an extremely efficient percentage from the perimeter, Lady Rocket coach Hal Murrell was pleased with his team’s ability to close out a close game.
“It was just a big team win. It was the first time we’ve been in a situation where we had to execute to close out the game,” he said.
The game was truly a tale of two halves for the Lady Rockets, who came out of the gates on fire and built a 19-12 lead by the end of the first quarter.
“It was a tale of two halves, kind of like Jekyll and Hyde. I thought in the first half, there were some glimpses of a really good basketball team, then in the second half, they (Grundy Co.) started knocking down everything they were shooting,” Murrell said.
While both teams struggled in the second quarter, the second half was a seesaw affair that saw the Lady Yellow Jackets rally for 23 in the fourth frame.
As a team, Grundy County connected on nine 3-pointers in the contest, but Forrest was also efficient at the arc and connected on seven treys.
Carlee Smartt and Kaylee Smartt each connected on four treys and led Grundy County in double figures, but Forrest also proved effective on the perimeter as well.
Addison Bunty drilled four 3-pointers and chipped in 16 points, while Ryann Lewis led the home team with 17 points.
“I thought Ryann Lewis did an awesome job tonight on the rebound. Macyn Kirby did a good job as far as running the point. We were able to get some baskets inside the paint off offensive rebounds. We didn’t do a super great job making foul shots down the stretch, but we made enough to win,” Murrell said.
With the game on the line, the Lady Rockets made just enough shots at the free throw line in the second half to cling to the two-point win.
As a team, Forrest shot 11-of-18 at the line for the game, but was just 7-of-12 in the fourth quarter.
“Our execution on the offensive end wasn’t great, but a lot of that has to do with them,” Murrell said.
Still, the Lady Rockets saw Lewis and Bunty combine for 34 points to lead six players in the scoring column.
The Smartt duo led Grundy County with a combined 35.
Forrest will look at the sweep over Grundy County on Friday in Coalmont.
“There’s a lot of things we can look back at on the film and say we can be better. It’s going to be hard when we go down there Friday night,” Murrell said.