It was senior night at Chapel Hill on Thursday as the Forrest Lady Rockets hosted the Fayetteville Lady Tigers in a non-conference matchup. 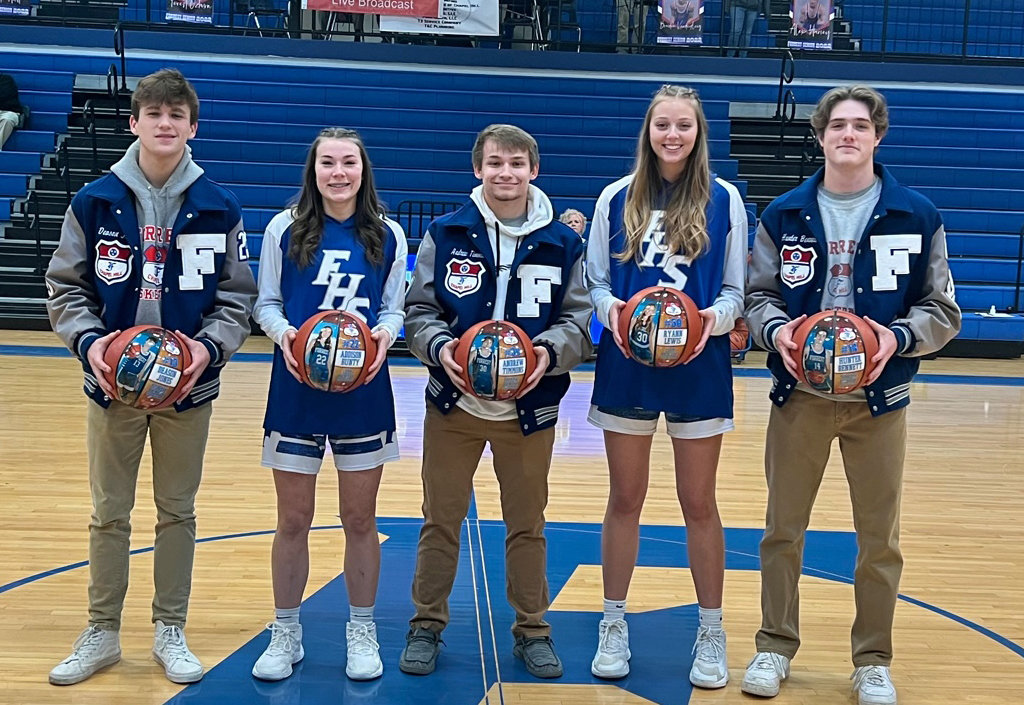 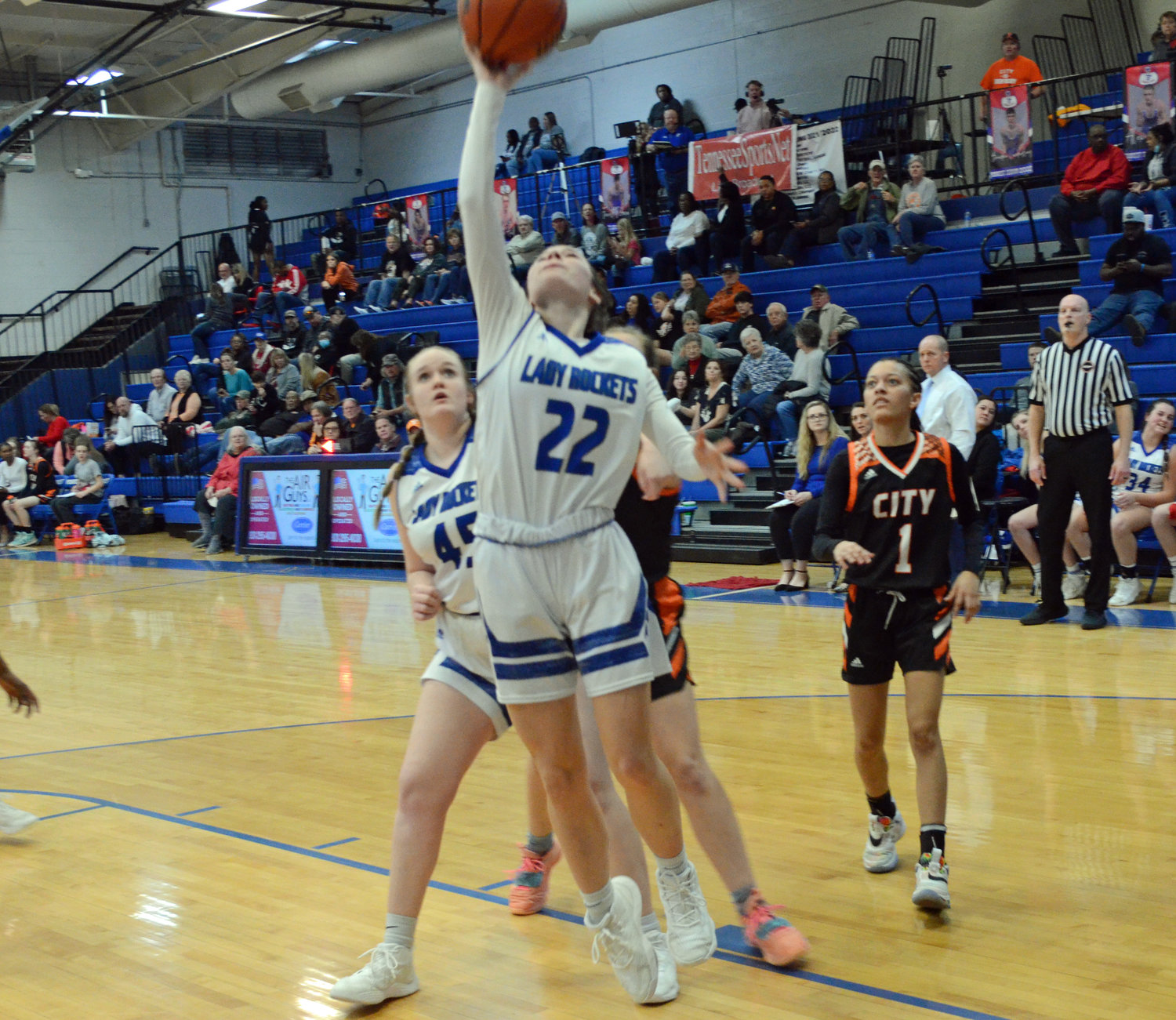 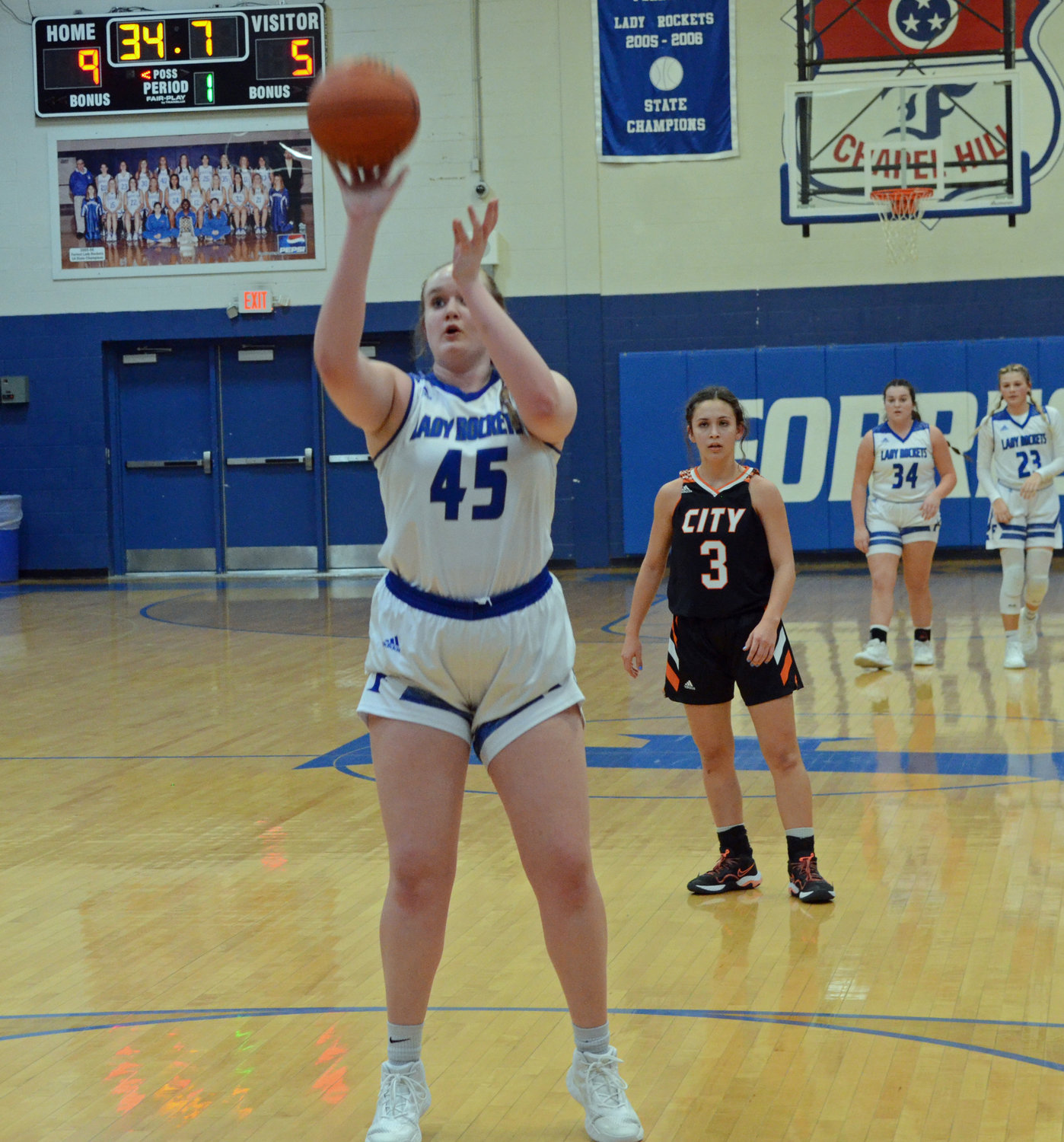 Cadence Chapman had four field goals and went a perfect 4-for-4 from the free throw line versus the Lady Tigers. 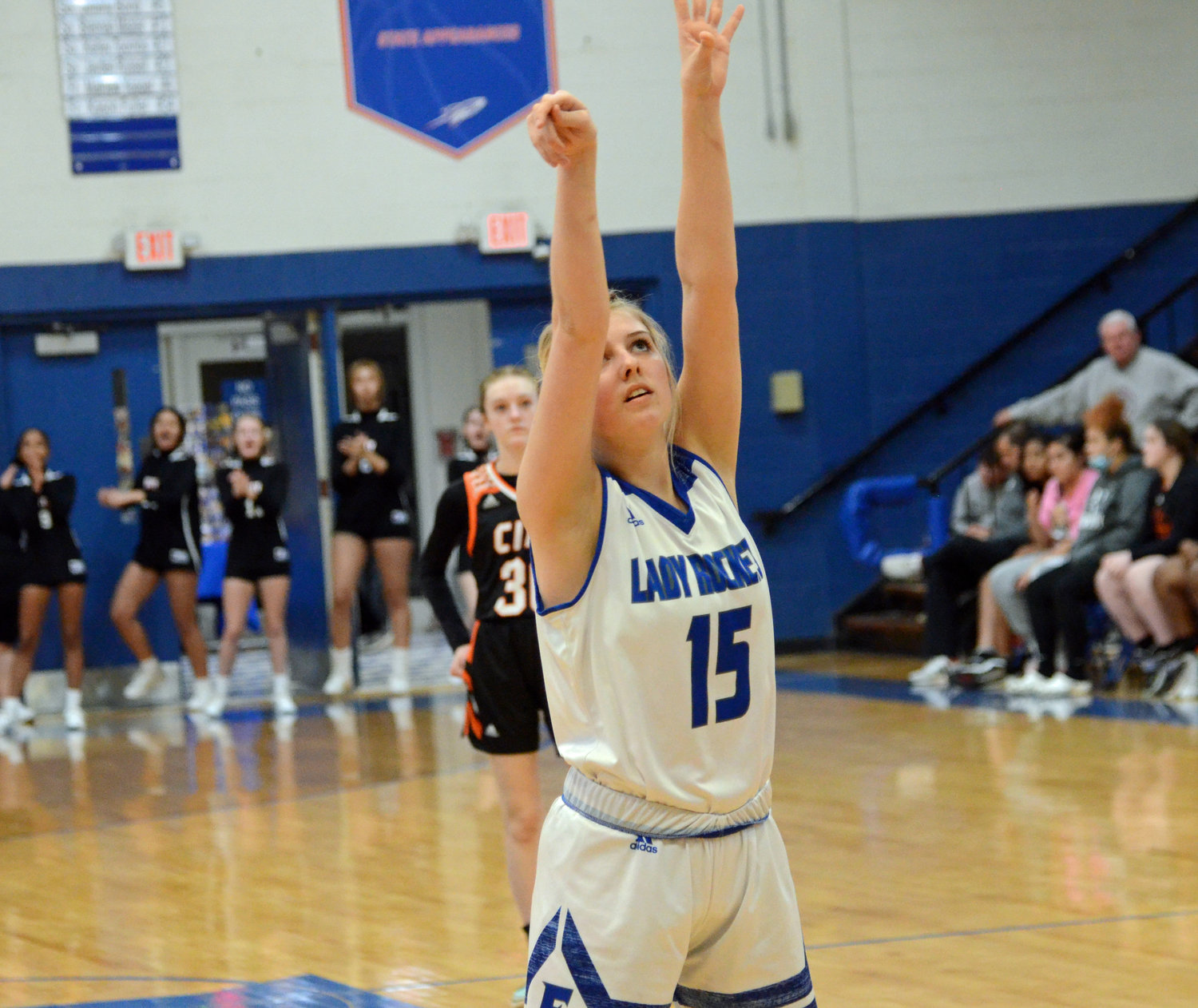 Senior Megan Mealer hit some crucial free throws down the stretch for the Lady Rockets. 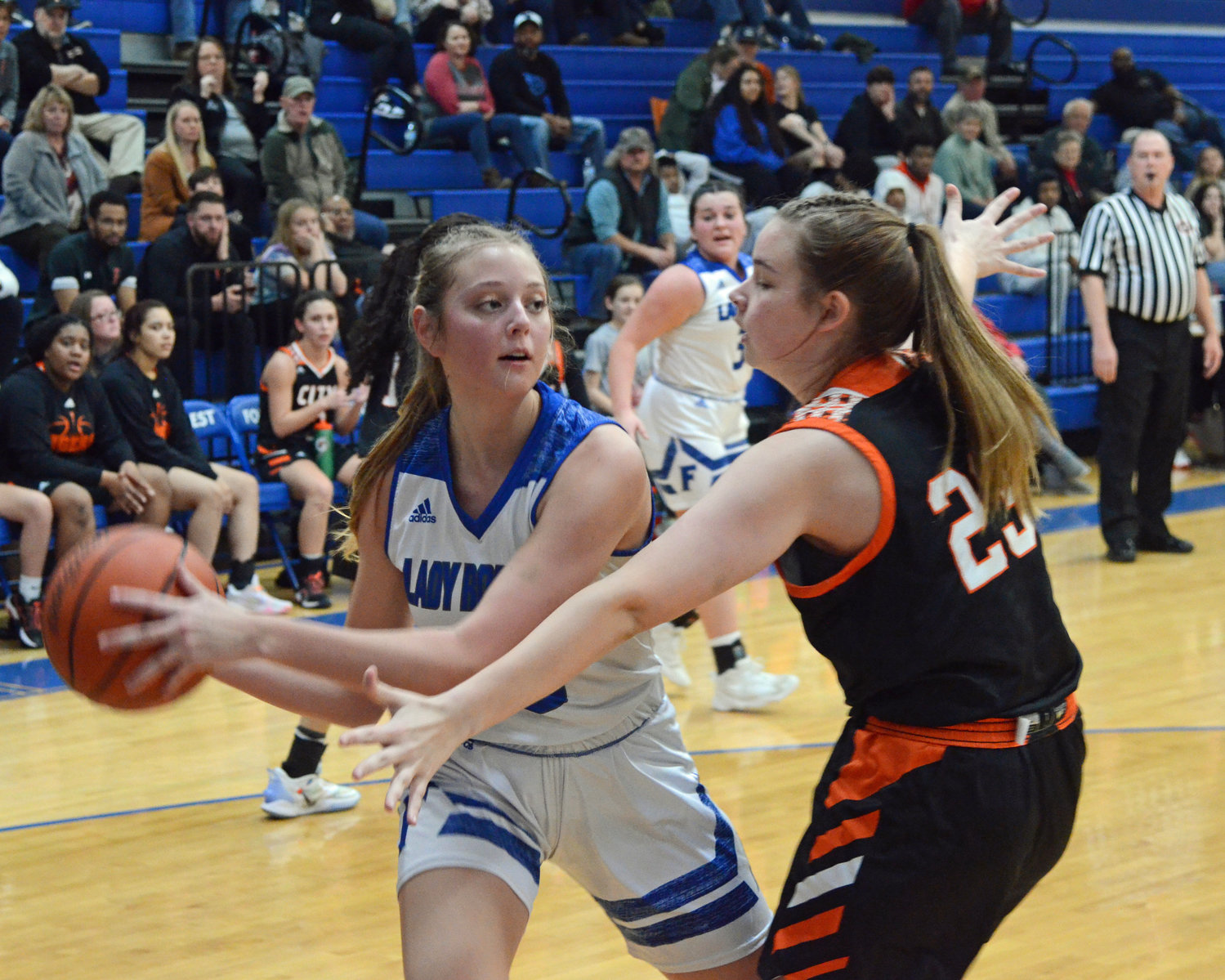 Senior Ryann Lewis gets a first quarter assist on a nice pass to Macyn Kirby. 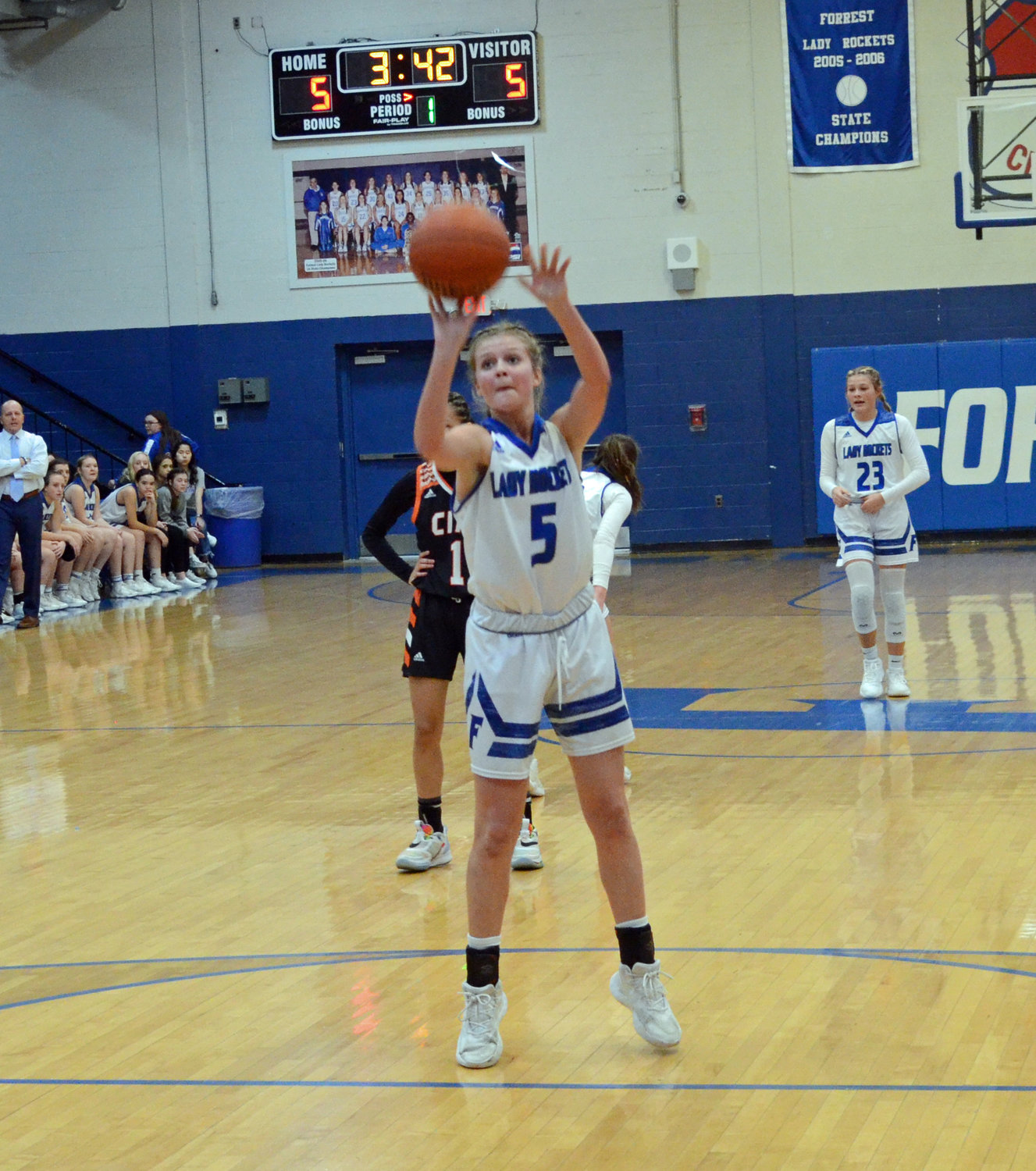 Macyn Kirby scored a game-high 16 points and went 6-for-9 from the free throw line. 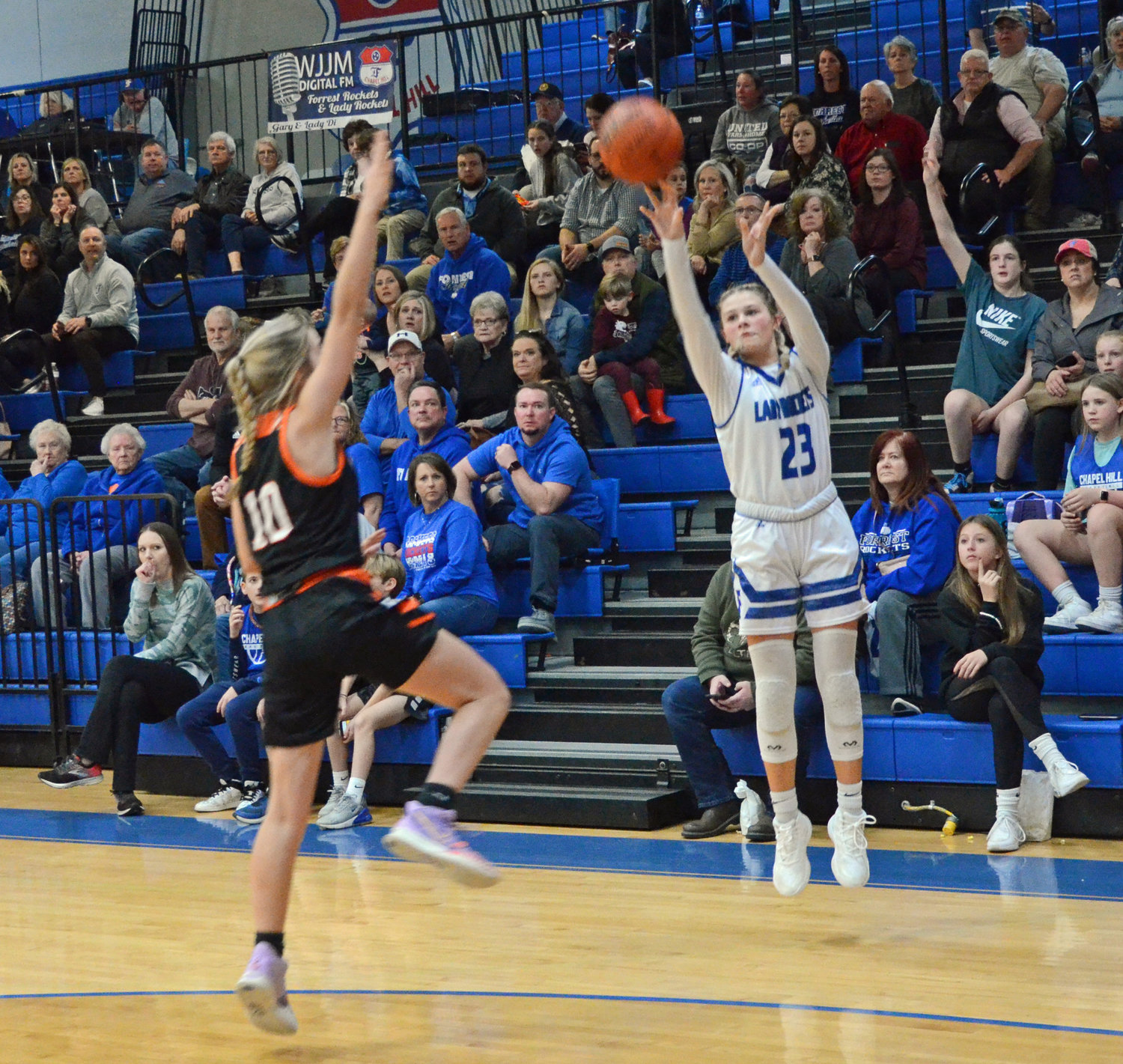 Kinslee Inlow (23) drills one of her two 3-pointers in the game.
Previous Next
Posted Thursday, February 17, 2022 7:53 am
By Anthony S. Puca Sports Writer

It was senior night at Chapel Hill on Thursday as the Forrest Lady Rockets hosted the Fayetteville Lady Tigers in a non-conference matchup.

Fayetteville took an early 5-3 lead before Macyn Kirby came up with a three-point play the old-fashioned way and Cadence Chapman followed with basket in the low post and two free throws to give Forrest a lead they did not surrender for the remainder of the game.

Kirby finished with a game-high 16 points, a pair of 3-pointers, and a solid 6-for-9 effort from the free throw line.

Chapman and Kinslee Inlow were also in double figures with 12 and 10 points respectively with Inlow canning two 3-pointers and both players making all of their free throws.

Forrest seniors Ryann Lewis, Addison Bunty, and Megan Mealer all had two apiece in the contest.

Chapel Hill’s 14-for-19 effort from the charity stripe bested Fayetteville, which made just 8-of-18 free throws in the contest.

Inlow drilled a 3-pointer to start the second period and Kirby followed with a field goal to open up a 15-7 lead for Forrest.

Fayetteville’s Hannah Griffin scored the next three points before Chapman scored in the low post and Inlow followed with a corner 3-pointer for a 10-point Forrest lead.

The Lady Rockets took a 23-11 lead to the locker room at halftime and Bunty scored to open up the second half.

One free throw by Kirby midway through the stanza gave Forrest its biggest lead of the game at 31-16, but the Lady Tigers dug in as they went on an 8-0 run to end the third quarter with Griffin and Shaneka Nance scoring four points apiece.

Fayetteville kept nipping at their heels, cutting the Forrest lead to six points with 3:39 remaining in the game.

The Lady Rockets came up with another offensive surge via a 6-0 run on baskets by Chapman and Lewis, plus a pair of Kirby free throws to make it a 12-point game at 41-29.

Nance drilled a 3-pointer to halt the FHS run and after another Kirby charity shot, Nance went downtown again to slice the Forrest lead back to six points.

A Forrest missed shot gave the ball back to Fayetteville and they had the chance to cut the lead even more, but missed the front end of a one-and-one situation at the free throw line.

Mealer made a couple of free throws down the stretch to seal the win for the Lady Rockets, who traveled to Cascade on Friday night and blew out the Lady Champions 54-21 in the regular season finale.

Forrest (12-13) beat Grundy County 54-43 in Monday night’s opening round of the District 7-AA Tournament and will take on the host Viqueens in tonight’s night’s title game at Unionville.

Community (21-7) blasted Cascade 61-33 in the other opening round game Monday.

With the wins, Forrest and Community will host a first round Region 4-AA Tournament game next week while Cascade and Grundy County will be on the road.