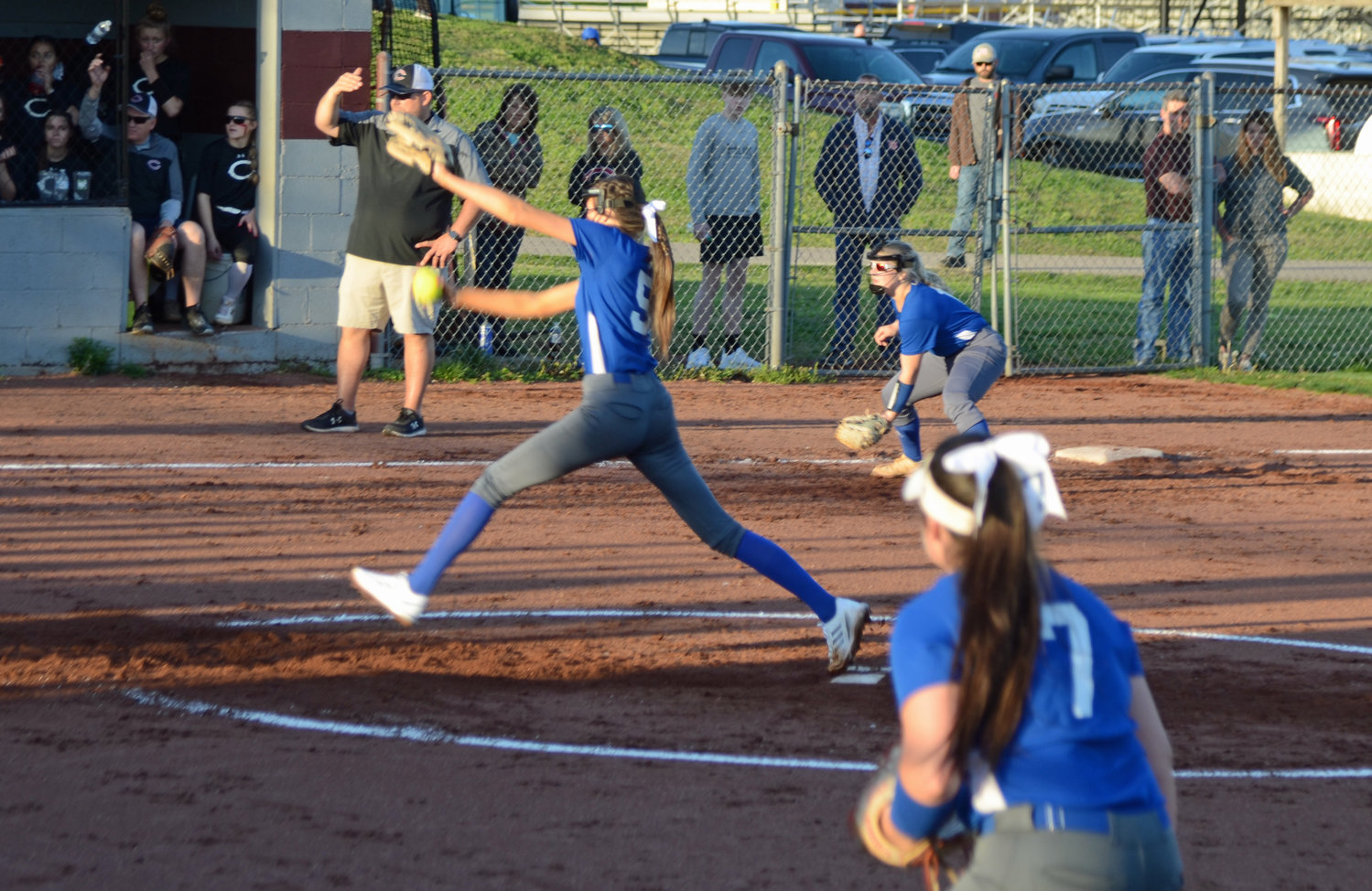 Ella Chilton came to the circle in the bottom of the second inning and shutout Cornersville the rest of the way to pick up the win.
Tribune Photos by Anthony S. Puca

Briley Burnham (14) chases down Cornersville’s Alicia Polk (3) on a rundown play in the bottom of the first inning. 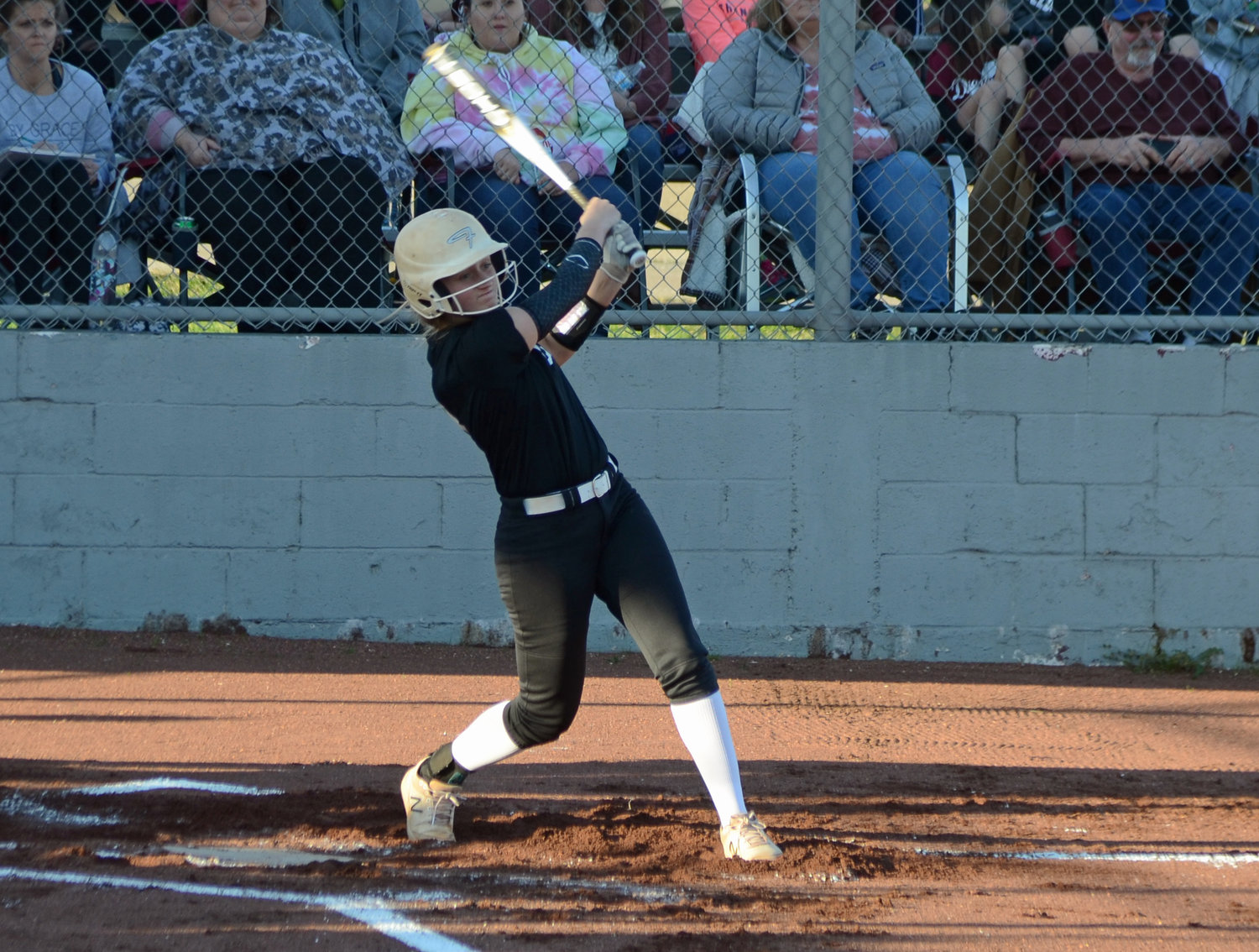 Alicia Polk drills a two-run single in the bottom of the first inning for the Lady Bulldogs. 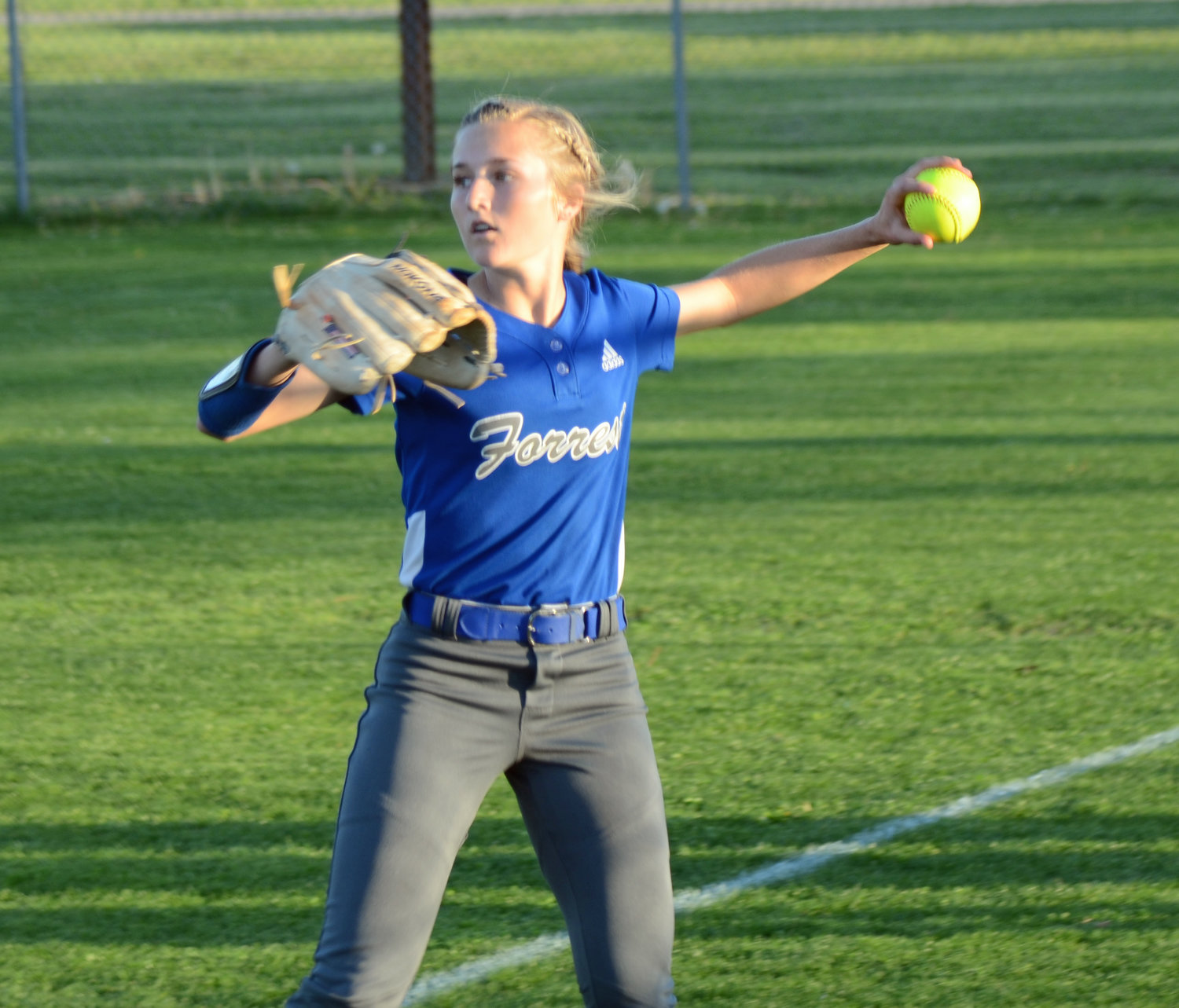 Maggie Daughrity had a huge night on defense in right field for the Lady Rockets. 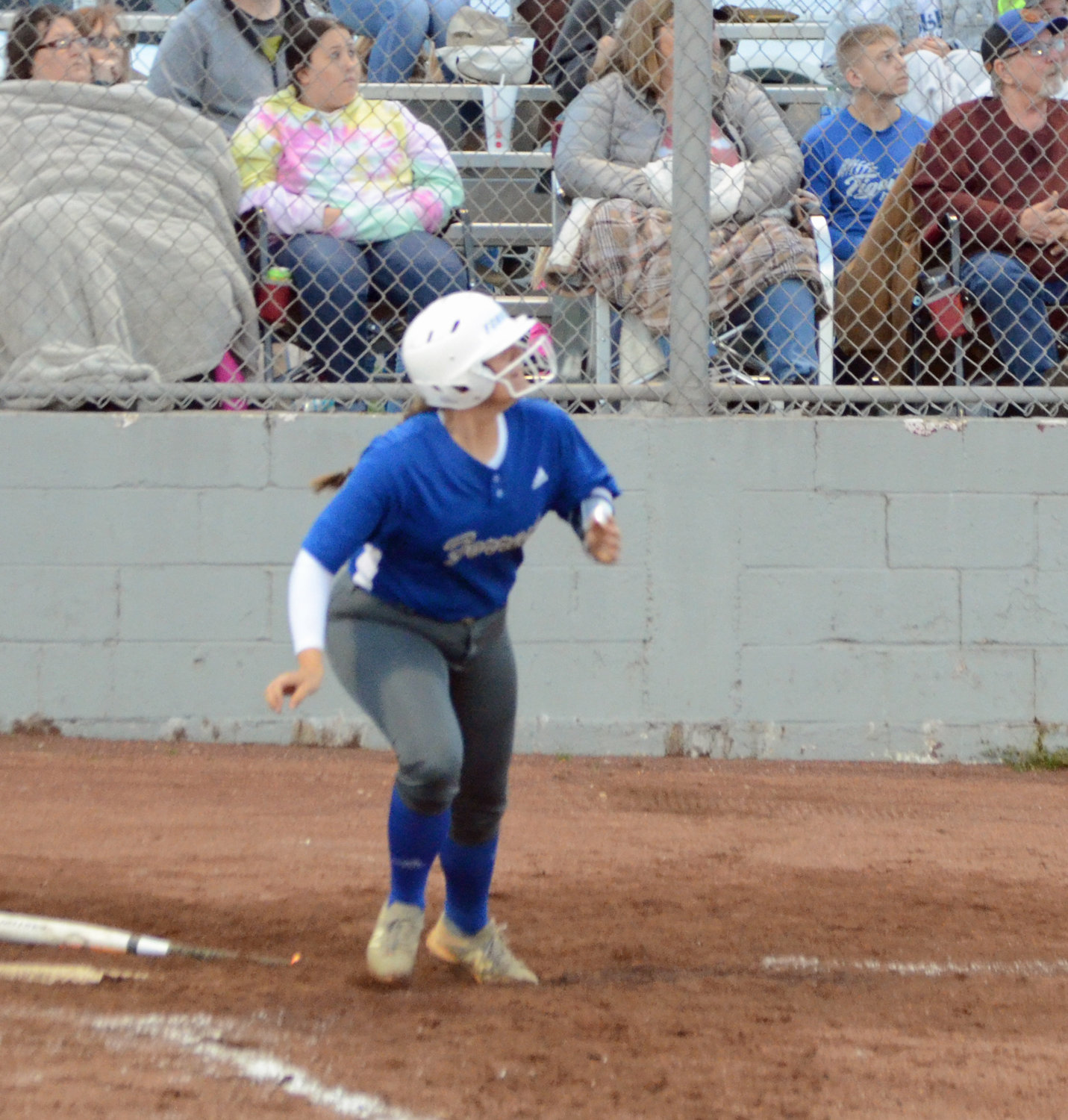 Sarah King belts a solo homerun in the top of the seventh inning to make it a 6-3 contest. 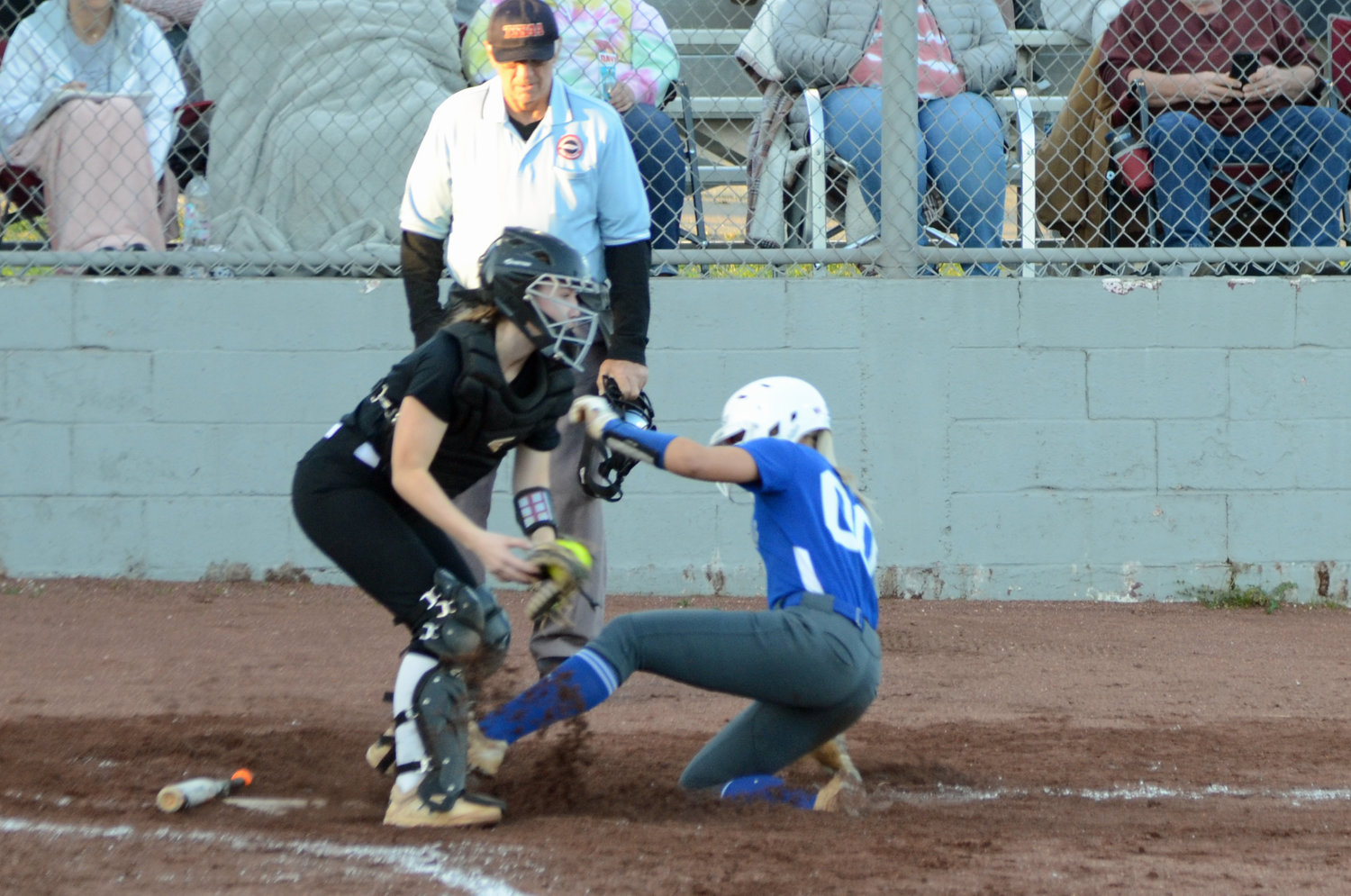 Abby Ferguson slides safely home to tie the game at 3-3 in the top of the third inning. 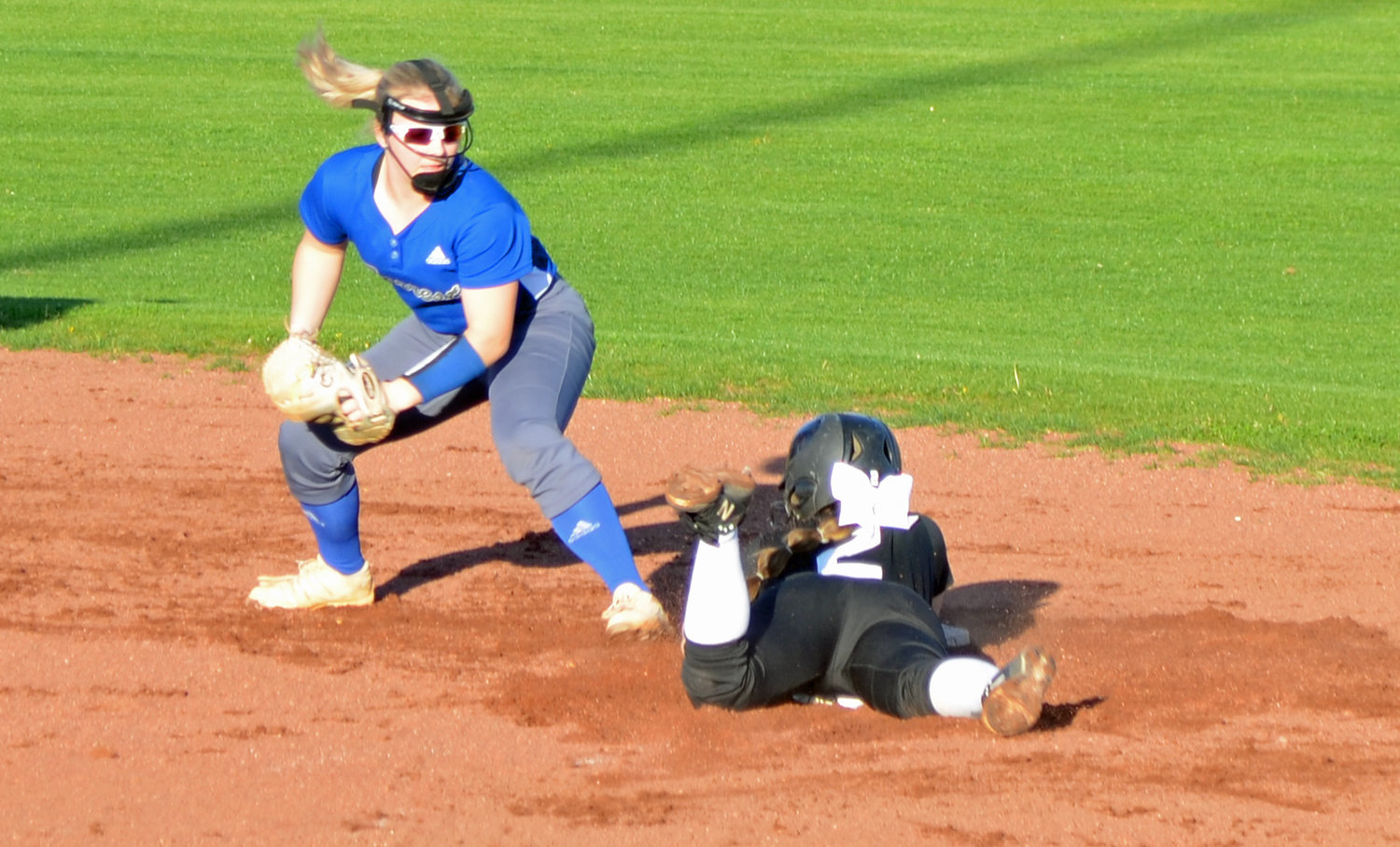 Cornersville’s Emma Ward slides safely in to second base in the first inning.
Previous Next
Posted Friday, April 15, 2022 12:17 pm

“We know that some days we hit the ball well and we hit the ball hard and there are other days we have to use small ball and figure it out that way,” Lightfoot said.”
Forrest coach Shelby Lightfoot
By Anthony S. Puca Sports Writer

The Forrest Lady Rockets may be finding their stride as they travelled to a soggy Frog Bottom for a Thursday evening intra-county showdown with the Cornersville Lady Bulldogs and came away with a hard fought 6-3 comeback win.

The back-to-back Class 2A state champions fell behind early as the Lady Bulldogs scored three runs in the bottom of the first inning on a two-run single by Emma Ward an RBI base hit by Hannah Moore.

“We felt last weekend at the Ravenwood Tournament was kind of like our turning point where we were doing some really good things,” Forrest coach Shelby Lightfoot said. “We are still struggling in our first innings, we know our bats will come, so if we can clean that first inning up it will really give us some momentum.”

Chilton struck out four and walked three Cornersville batters to pick up the win for Forrest.

“We are trying to get Emory some innings, she has good movement and I think if we get those first two batters out and make a play it’s a different outcome because they got some momentum going,” Lightfoot said. “Right now we have Ella in that closing role and she is doing a fabulous job, coming in with confidence and shutting them down and she is really that compliment to Emory and Julie (Williams).”

The Lady Rockets started a little slow on offense, but put together a 10-hit attack as every player in the starting batting lineup had at least one hit with Addison Bunty coming up with a pair of safeties.

Forrest erased the early three-run deficit in the top of the third inning as Macyn Kirby, Christa Warren, and Abby Ferguson slashed consecutive base hits to start the inning and make it 3-1.

Carli Warner followed with a squeeze bunt RBI and Sarah King tied the game with a sacrifice fly RBI to center field.

Bunty hit a laser in to the right field corner for a triple and scored on a Briley Burnham infield single to give Forrest a 4-3 lead.

Chilton set down Cornersville 1-2-3 in the bottom of the inning and Lady Bulldogs’ stating pitcher Cora Duke did the same to Forrest in the top of the fourth inning.

Chilton retired the Lady Bulldogs in order again in the home half of the inning and in the top of the fifth inning, Forrest plated a small ball run as Ferguson was hit by a pitch to lead off the frame, stole second, went to third on a nice piece of hitting by Warner, and Ferguson scored on a King ground ball out to make it 5-3.

“We know that some days we hit the ball well and we hit the ball hard and there are other days we have to use small ball and figure it out that way,” Lightfoot said. “They kept us off balance with some changeups, so it was hard for us to get power behind it, so when you can’t get power you have to find other ways to score.”

The Lady Rockets had a great defensive game with right fielder Maggie Daughrity scooting around covering serious acreage all night, recording four put-outs and almost throwing out one Cornersville batter after a one-hop, line drive base hit.

Burnham also came up with a couple nice defensive plays, finishing off a rundown play early in the game and coming up with a pretty scoop, tag and toss to first for a double play in the bottom of the fifth inning.

Forrest added an insurance run on a solo homerun by King in the top of the seventh inning and Chilton had a relatively easy bottom of the frame to finish off the contest.

It was the third win in a row for Forrest in the rivalry that was revived last season after nearly a nine-year hiatus.

The Lady Rockets hold a 16-3 advantage in the series dating back to 2002, including state tournament elimination game wins in 2008 and 2009.

Forrest (13-8) competes at the Border Battle in Lincoln County this weekend before getting into the meat of the District 7-AA schedule over the next few weeks.

“Now is when you have to turn that leaf and play your best ball moving forward to the end of our season, so hopefully we will keep growing,” Lightfoot said.