WARTRACE — The Forrest Lady Rockets are playing some of their best basketball of the season. Having won three-straight games last week, Forrest closed the regular season in convincing … 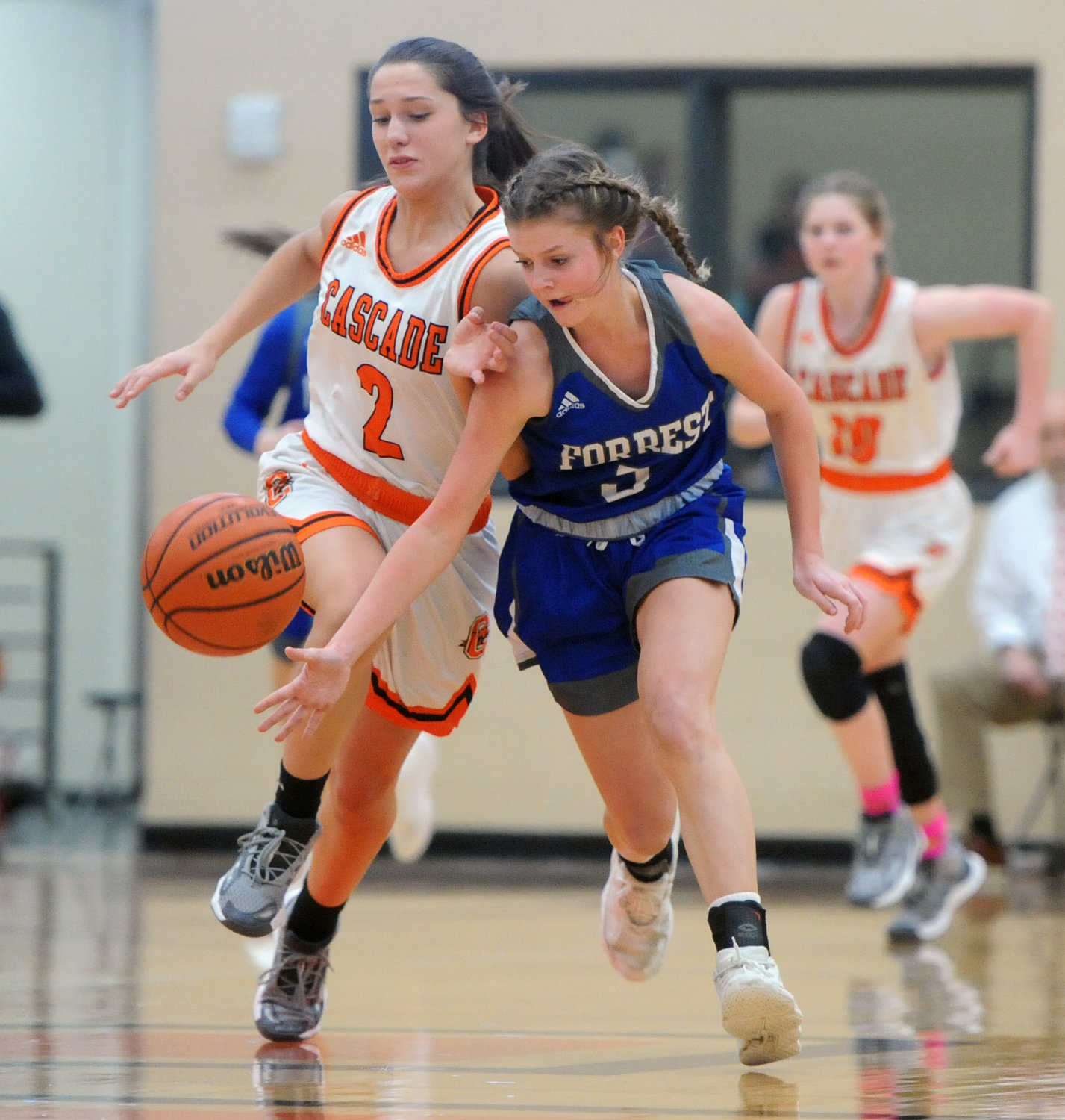 Macyn Kirby battles Cascade’s Lani Jones for possession and caps off the turnover with a layup. She scored 14 points against the Lady Champs.
Tribune Photo by Chris Siers 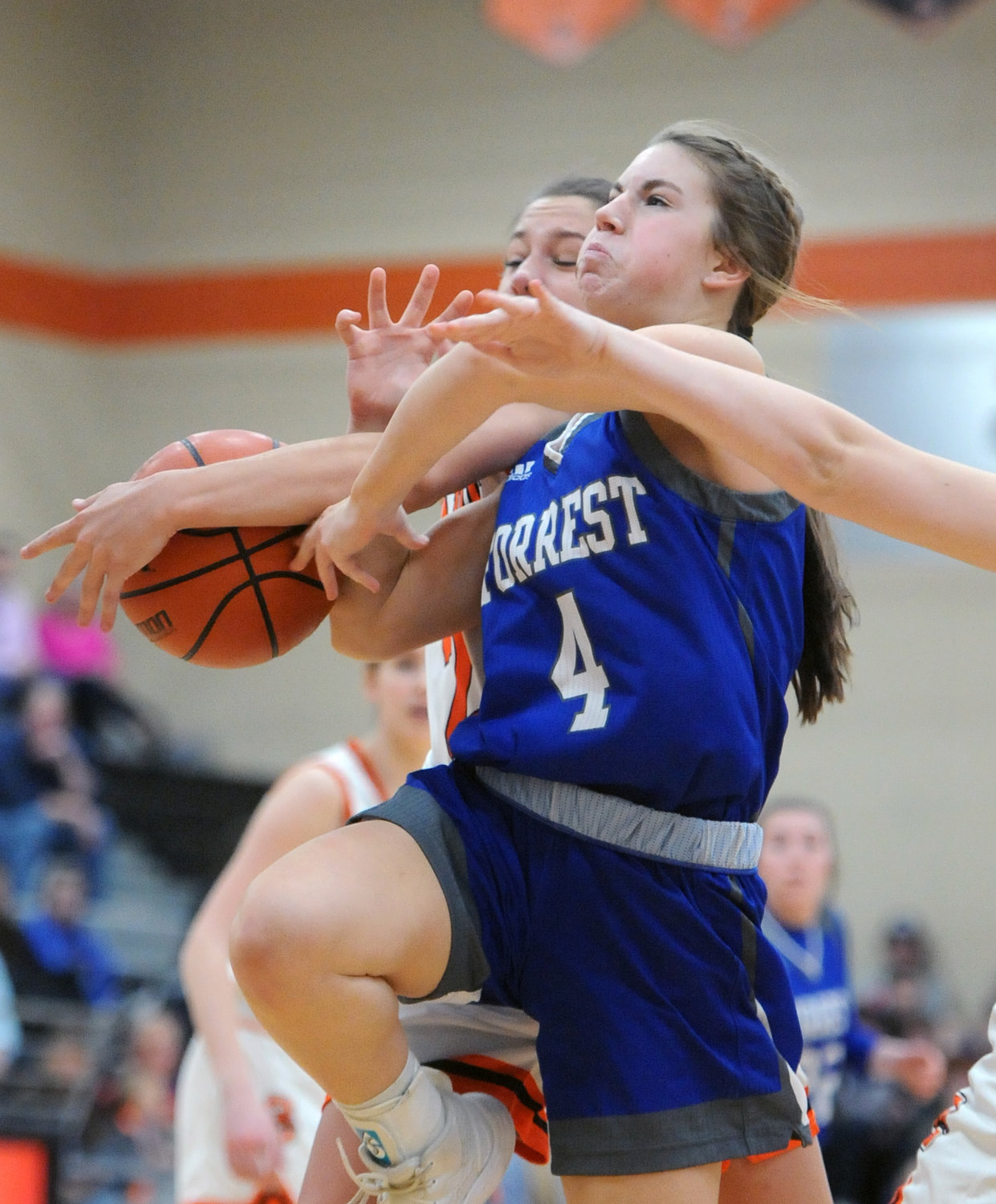 Emory Hall is fouled as she goes up for a layup.
Tribune Photo by Chris Siers
Previous Next
Posted Tuesday, February 15, 2022 11:03 am
By Chris Siers ~ sports@t-g.com

WARTRACE — The Forrest Lady Rockets are playing some of their best basketball of the season. Having won three-straight games last week, Forrest closed the regular season in convincing fashion, beating Cascade 54-21.
“This was the third win this week we’ve had. I was very pleased with the effort. I thought tonight our intensity stayed true for four quarters,” Lady Rocket coach Hal Murrell said.
As the game started, Forrest took part in a special moment of sportsmanship during the Lady Champion Senior Night.
Cascade senior Kylie Calvert had her senior basketball season cut short due to a knee injury suffered in soccer season.
In her final game played at Cascade, Calvert was on the floor for the game’s opening tip-off, which Forrest allowed Cascade to win and Calvert officially penciled her name in the scoring column with an easy basket under the rim.
In turn, Cascade allowed Forrest to answer Calvert’s score, essentially starting the game over with an even score.
“ I’ve never been involved in anything like that. Coach (Hampton) called and asked to do it and I said absolutely we could. It was good to see the emotion on that girl’s face. Kids don’t realize how fleeting these times times are and they go by really quick. For her to have that moment is something she’ll have forever,” Murrell said.
After the opening baskets, the Lady Rockets took immediate control of the game and never looked back in the 33-point victory.
Forrest got key contribution from guard Macyn Kirby and exploited the mismatch of Cadence Chapman.
The pair combined for 30 points, with Chapman’s 16 points leading all scorers.
“Cadence is a matchup problem. She has awesome hands. To only be a sophomore, the game is still coming to her. Macyn Kirby is doing a tremendous job for us as far as a player who is not really a true point guard,” Murrell said.
Offensively, the Lady Rockets raced out to an 18-5 lead in the first quarter, not allowing a field goal until Jordan Green hit a shot at 2:51.
Forrest answered with a corner 3-pointer by Addison Bunty.
Kirby took over in the second quarter and scored six-straight points, allowing Forrest to lead 23-5 by 5:52 mark of the second quarter.
Cascade managed just three points against a the stingy Forrest defense that held the Lady Champs in single digits in all four quarters.
“I thought our defense was good tonight as far as causing some turnovers and getting some easy baskets,” Murrell said.
Forrest kept its tenacity into the second half and out-scored Cascade 17-13 to preserve the 33-point victory.

Forrest 54, Grundy Co. 43
On Monday night, the No. 2 seed Forrest Lady Rockets faced off against Grundy County in the semifinals of the District 7-AA tournament.
With plenty of first-half fireworks, it was Forrest that withstood a 19-point fourth quarter surge to claim the 54-43 win and advance to the 7-AA championship to face the No. 1 Community Viqueens.
Grundy opened the first quarter firing on all cylinders, with Carlee Smartt lighting it up from the perimeter.
As a team, Grundy County made good on nine treys, with Smartt knocking down five, including four in the first quarter.
Forrest was able to tread water and keep it a two-possession game with key baskets by Cadence Chapman in the paint and 3-pointers by Macyn Kirby and Kinslee Inlow.
After trailing by seven points at the end of the first quarter, it was Forrest’s turn to rain 3-pointers as the Lady Rockets answered with four treys in the second quarter, along with six more points by Chapman.
Having rallied for 20 in the second, Forrest posted a 33-30 lead after the first half of play.
While the first half was filled with plenty of fireworks, Forrest’s defense effectively shut down the Lady Yellow Jackets in the third quarter.
Grundy County managed a single basket by Abigail Childers in the quarter, while extending its lead to 43-32 by the end of the third.
With the lead well in hand, the Lady Rockets were able to effectively get to the free throw line and despite being out-scored 11-9 in the fourth, made 5-of-8 free throw attempts to secure their spot in the upcoming District 7-AA title game.
Smartt’s 19 points led all scorers, but it was the Lady Rockets who placed three in double figures, with Chapman’s 13 points leading the way for the winners.
Kirby and Inlow each added 11 points.
Forrest will face Community in the championship on Thursday night at 7:45 at Community.